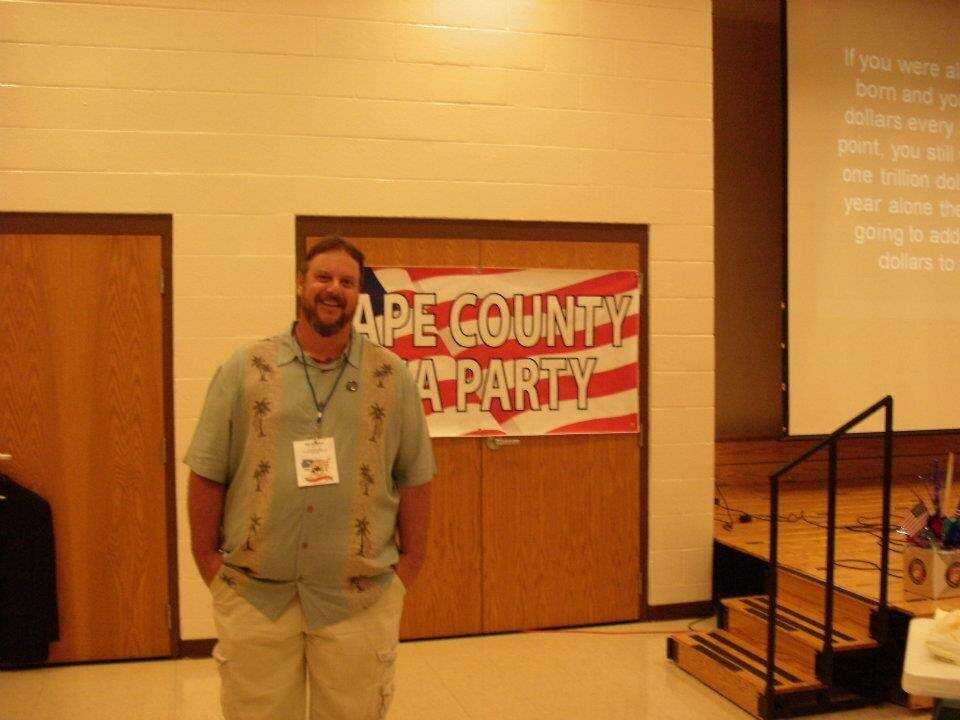 Good evening! My name is Rick Vandeven, and I am proud to be THE Missouri 8th Congressional District Libertarian Party candidate for, or in my case, AGAINST Congress. I am grateful to have the opportunity to speak with you tonight.

A few weeks ago, I was approached by a political activist who inquired of me, "Are you freer now than you were four years ago?"

I understand that this particular line of questioning is designed to produce an immediate knee jerk response without generating much thought on the part of the questioned. However, libertarians are famous for composing 1000 page treatises on the benefits of privatized trash collection, so naturally I decided not to confuse my interrogator, and instead offered him a cold beer from my cooler. The only good thing that President Obama has learned in his first term is the diversionary benefits of free beer.

But I digress! Hopefully my questioner is in the audience tonight, because I would now like to provide an answer to his query: am I freer now than I was four years ago?

Four years ago, my children had never known their homeland to not be in a state of war at any point in their lifetimes.

Four years ago, I couldn't travel via commercial air without being treated like a criminal.

Four years ago, a sizable portion of my paycheck was confiscated to support the wealthiest demographic in the history of this nation through the Social Security program.

Four years ago, agents of this nation's Executive Office detained and tortured terror suspects without due process.

Four years ago, I could be arrested, and thrown into the world's largest prison population for ingesting a plant banned by the federal government.

Four years ago, the Federal Reserve printed copious amounts of fiat currency in order to maintain an economy built on debt.

Are these the trademarks of a free society? The illustrations that I just cited existed four years ago, and they continue to exist unabated today. I did not feel free then, and I certainly do not feel free now after President Obama has doubled down on the illicit practices of his predecessor.

Do you see a pattern? Do you honestly believe that electing the 158 year old elephant as opposed to the 184 year old jackass is going to force a discernible change of direction from the edge of the cliff that the two archaic, duopoly parties are ploddingly dragging us towards? For example: will Romneycare be any less of a Rube Goldberg mechanism than Obamacare is? Republicans get elected by making vague references to "free market reforms", yet any attempt by the State to control the price and distribution of scarce products like health insurance and/or healthcare runs contrary to a genuine free market economy.

Most Americans have figured out that the left/right paradigm is false; that the central government is outdated and unnecessary. This belief is reflected in the fact that most Americans don't vote, and in the way that we are living our lives in an increasingly decentralized fashion. When I think of all the positive things in my life: a loving family, wonderful friends, an array of gadgets that improve my productivity and my ability to communicate, air conditioning, 175 different types of breakfast cereal at the grocery store -- none of these things are made possible by a desperate, overbearing, slow, outmoded, pyramidal centralized government. It is no coincidence that four issues which Americans commonly state as being most concerned about are the job market, retirement, healthcare, and education. These items are vigorously regulated and manipulated by the central government.

Society is moving on, despite a vocal minority of Americans who are preventing real progress by pathetically adhering to the superstitious hyperbole spewed by the duopoly parties, while demanding political solutions to the problems created by politics. There can be no political solution. Leviathan governments like that of the United States do what governments have always done throughout history: grow exponentially at the cost of freedom. The State is our enemy. I am committed to the achievement of peace in my lifetime, not through nationalistic military might, patriotic puffery, or the confiscation and redistribution of wealth; but through participating in the marketplace of ideas, free trade, honest money, respect for the sovereign individual, and the rule of law.

I am throwing the ball back into our court. It is up to "We the People" to elect honorable men and women to public offices who will not pass legislation for the benefit of one group of individuals at the expense of another. Leaders who will stand up, and stop selling the next generation down the river for false security, and convenient comfort.

When Patrick Henry made his famous "Give me liberty, or give me death" speech, it was not through correspondence with Parliament, or a letter to the editor, or a series of articles published in periodical publications. He addressed his fellow countrymen, colleagues, friends, and neighbors directly. I am not going to pretend that this speech is in the same league as Henry's, or that I am a historical figure in the same vein as him. I am just a humble paper maker from Scott County, Missouri. But in his spirit, and the spirit of REVOLUTION that this country was founded on, I ask you, my fellow countrymen, colleagues, friends, and neighbors: please, stop nurturing our enemy the State through the support of the State's lapdogs -- the Democrat and Republican parties. You do have a choice. ROCK THE STATE!

I am Rick Vandeven. I am a libertarian and I am running against US Congress. Thank you.