Why I Oppose The War On Drugs 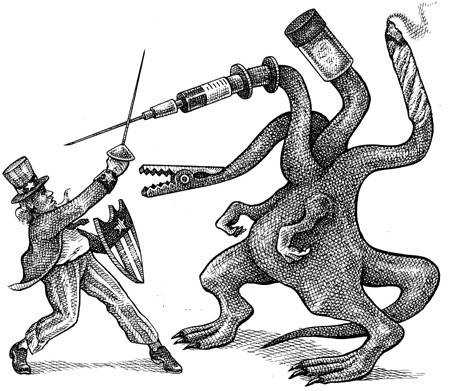 As a member of the Show-Me Cannabis Regulation Campaigning Committee, I recieve e-mails and updates regarding our fight against the failed war on drugs. The following is a message I received this morning from Trish Bertrand of Springfield, MO explaining why she also fights for the cause...

"I fight cannabis prohibition because no one should ever experience what my family went through.

My husband, Daryl, suffered long-term chronic pain from a disc in his back that had collapsed onto the one below it and pushed forward to the point where it could be seen protruding with the naked eye. Due to other health conditions, surgery and prescription pain killers were likely to cause serious harm to his liver, so he did what hundreds of thousands of peaceful and productive Americans do every day: he used cannabis to treat his pain. He was able to work and be a good husband and father. Instead of trying to buy it off the black market and enabling the drug lords, we built our own garden.

Years later, we finally got a doctor's approval to start spinal fusions. Four days after his second surgery, we were raided by the COMET Drug Task Force. A computer repair store had found some deleted pictures of the garden, and turned them over to the police.

Due to Daryl's medical condition, he was released after four hours of confinement. I will never forget telling him that night that we headlined the local news on three channels. The fallout started quickly with people pulling orders from our business right and left. We were falsely accused ofusing our family business, a playground store, as a front to sell cannabis on the street.

Daryl took a plea agreement; he would be a felon and have 5 years community service. Even though I do not use cannabis, I plead guilty. At that point, we had no business, no income, and no way to pay a lawyer. In our 12 years of marriage, we had one speeding ticket between the two of us. Now we were felons, no longer able to get a decent job. Forced to move, the only place we could now afford was in a neighborhood with two pedophiles, a stabbing, and a felony assault. This isn't who we are.

A lot of people would blame cannabis, but that isn't right. Using cannabis kept him working and kept our family functioning. We were as happy as could be, in light of his illnesses. It was the unfair and unjust laws that put us where we are today, and I will not stop fighting until those laws are changed.