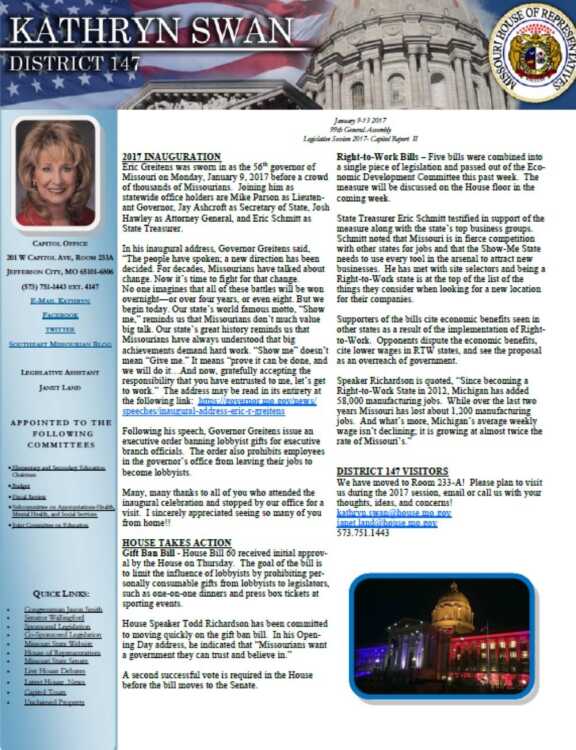 Eric Greitens was sworn in as the 56th governor of Missouri on Monday, January 9, 2017 before a crowd of thousands of Missourians. Joining him as statewide office holders are Mike Parson as Lieutenant Governor, Jay Ashcroft as Secretary of State, Josh Hawley as Attorney General, and Eric Schmitt as State Treasurer.

In his inaugural address, Governor Greitens said, “The people have spoken; a new direction has been decided. For decades, Missourians have talked about change. Now it’s time to fight for that change.

No one imagines that all of these battles will be won overnight—or over four years, or even eight. But we begin today. Our state’s world famous motto, “Show me,” reminds us that Missourians don’t much value big talk. Our state’s great history reminds us that Missourians have always understood that big achievements demand hard work. “Show me” doesn’t mean “Give me.” It means “prove it can be done, and we will do it…And now, gratefully accepting the responsibility that you have entrusted to me, let’s get to work.” The address may be read in its entirety at the following link: https://governor.mo.gov/news/speeches/inaugural-address-eric-r-greitens

Many, many thanks to all of you who attended the inaugural celebration and stopped by our office for a visit. I sincerely appreciated seeing so many of you from home!!

Gift Ban Bill - House Bill 60 received initial approval by the House on Thursday. The goal of the bill is to limit the influence of lobbyists by prohibiting personally consumable gifts from lobbyists to legislators, such as one-on-one dinners and press box tickets at sporting events.

House Speaker Todd Richardson has been committed to moving quickly on the gift ban bill. In his Opening Day address, he indicated that “Missourians want a government they can trust and believe in.”

A second successful vote is required in the House before the bill moves to the Senate.

Right-to-Work Bills – Five bills were combined into a single piece of legislation and passed out of the Economic Development Committee this past week. The measure will be discussed on the House floor in the coming week.

State Treasurer Eric Schmitt testified in support of the measure along with the state’s top business groups. Schmitt noted that Missouri is in fierce competition with other states for jobs and that the Show-Me State needs to use every tool in the arsenal to attract new businesses. He has met with site selectors and being a Right-to-Work state is at the top of the list of the things they consider when looking for a new location for their companies.

Supporters of the bills cite economic benefits seen in other states as a result of the implementation of Right-to-Work. Opponents dispute the economic benefits, cite lower wages in RTW states, and see the proposal as an overreach of government.

Speaker Richardson is quoted, “Since becoming a Right-to-Work State in 2012, Michigan has added 58,000 manufacturing jobs. While over the last two years Missouri has lost about 1,200 manufacturing jobs. And what’s more, Michigan’s average weekly wage isn’t declining; it is growing at almost twice the rate of Missouri’s.”

We have moved to Room 233-A! Please plan to visit us during the 2017 session, email or call us with your thoughts, ideas, and concerns!