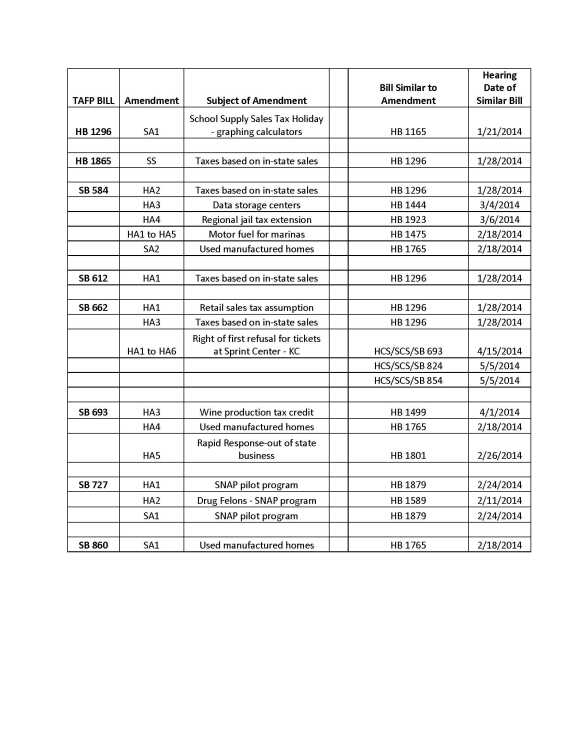 Eighteen amendments added to eight tax bills that were Truly Agreed to and Finally Passed (TAFP) during the final days of the legislative session may be referenced in other bills as noted in the chart.

Each biennium, the General Assembly adopts rules indicating how business is to be conducted. The most recent version of the Rules of the Missouri House of Representatives for the 97th General Assembly was adopted January 16, 2013. Specific details for the process of a bill becoming law are addressed in the Rules.

A minimum of twenty-one steps are involved from the initial filing of a bill until the Governor signs it into law. The committee hearing is a crucial step in the progression that gives an opportunity for proponents and opponents of the bill to testify. Amendments may be added to a bill while in committee or on the House floor.

Rule 46 (a) states, "Every amendment shall be distributed in advance of the time of the bill is initially taken up for consideration," while Rule 64 notes, "Senate bills may be amended in the House when placed upon third reading and final passage before the vote is taken thereon." The Rules do not stipulate a time frame for the distribution of the amendments, nor require that amendments be heard in a committee.

However, the majority of amendments offered on the House floor are provisions of related bills that have been heard in a committee. As a result, most of the amendments adopted by the House have been previously considered in a public hearing.

The numerous rules and subsequent actions required for a bill to become law provide transparency and opportunity for all Missouri citizens to be part of the law-making process.

A more detailed worksheet may be found here https://www.dropbox.com/s/ry7l8i2bl6rz1wu/Amendments%20on%20Tax%20Bills.xlsx

"How a Bill Becomes Law" http://www.house.mo.gov/billtracking/info/habbl.pdf

Rules of the House http://www.house.mo.gov/billtracking/bills141/rules/rules.pdf

Rules of the Senate http://www.senate.mo.gov/14info/rules/RuleBook2013.pdf