As I write this, we've had a large rainstorm followed by an Arctic blast. Although not exactly great conditions for hiking, these two ingredients are crucial for creating a spectacular yet brief sight: ice formations.

The bluffs, canyons, and shut-ins of Southeast Missouri and Southern Illinois provide the rugged terrain for creating frozen waterfalls, massive icicles, and other icy wonders. 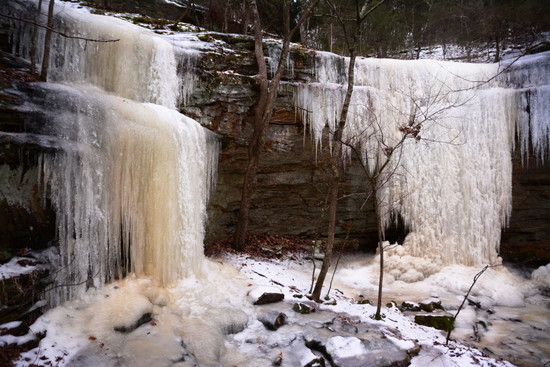 Of course, the challenge is to find that perfect day when the weather is tolerable, but not so warm that the icicles are rapidly melting and falling as sharp daggers. 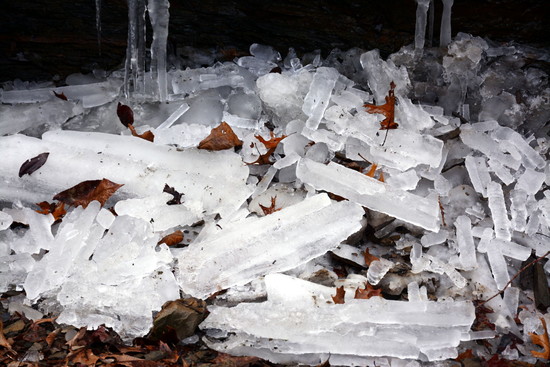 Another challenge is that ice is slicker than snot, especially when it has the chance to melt and refreeze. These congealed masses can appear in unexpected places and ruin your day if you make a wrong move. 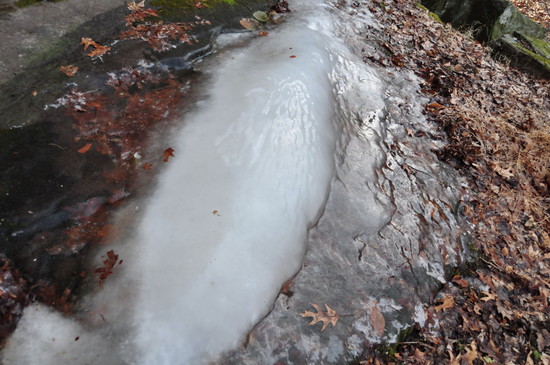 Nevertheless, winter hiking can provide amazing photo opportunities. Frozen waterfalls can be approached and studied without fear of getting drenched. 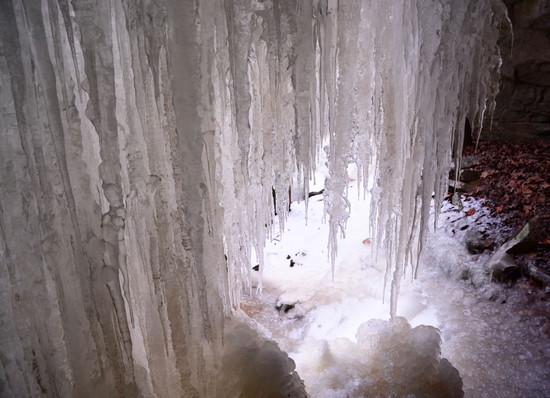 Below are some suggested destinations for ice hiking, although any place with enough water, cold, and ruggedness may work just fine.

The tall bluff at the north entrance of Giant City State Park, near Shelter #1, is a popular spot for rock climbers. Not as well known, however, is the small canyon and waterfall to the left of the bluff. A faint trail leads west from the climbing area around the bluffline to reach the canyon. Since the waterfall is fairly short, it can develop into a solid column of ice. 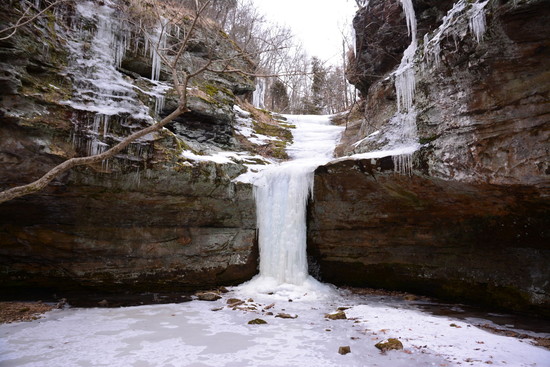 Overlooking Cedar Lake, a large rock shelter on the Cove Hollow Trail features a trickle of water that freezes into a massive icicle from above and beehive-shaped iceberg below. The bluffs along this trail, located in a sheltered canyon offering deep shade, tend to retain ice formations in warm weather longer than most areas. 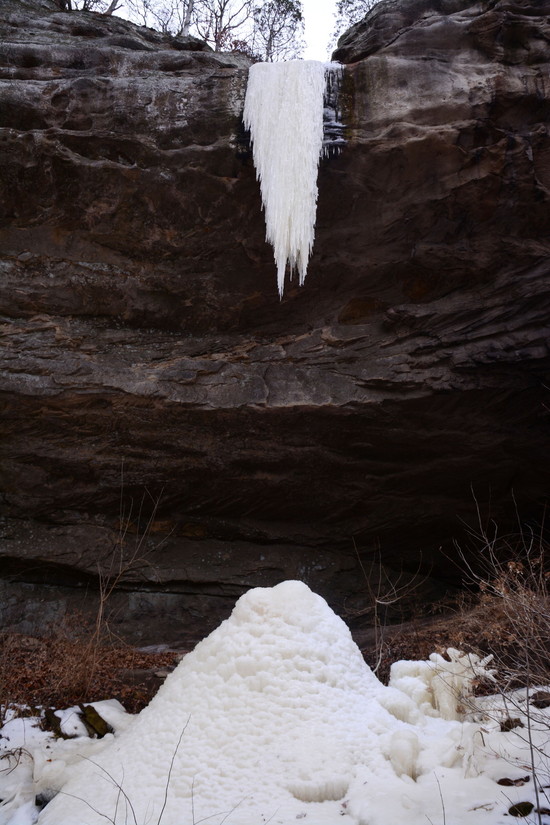 As I blogged recently, the branches of Cedar Creek include two box canyons with waterfalls. 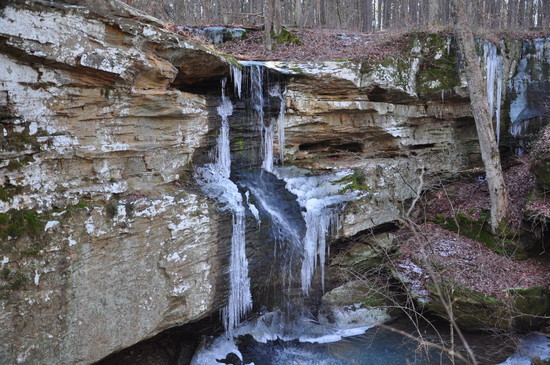 Meanwhile, seepage along the bluffs on either side of Cedar Creek create opportunities for icicles nearly everywhere. 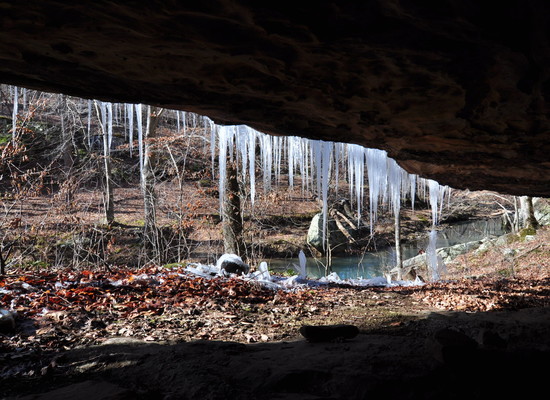 Although not easy to reach, especially during icy weather, this secluded waterfall in the Jackson Hollow Natural Area is worth the effort. In warm weather, water tumbles over the bluff and hits a large boulder -- the namesake splatterstone -- sending the droplets cascading in all directions. When frozen, this scene results in a large cone of ice. 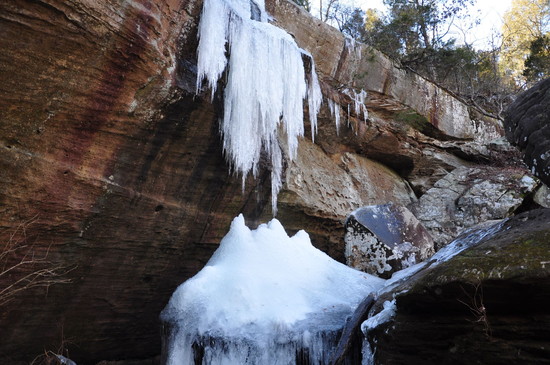 This was a total surprise, but the north portal to the former railroad tunnel at Tunnel Hill is deep enough and wet enough to allow the creation of icicles. It's only a short walk from a trailhead and parking lot for the Tunnel Hill State Trail. 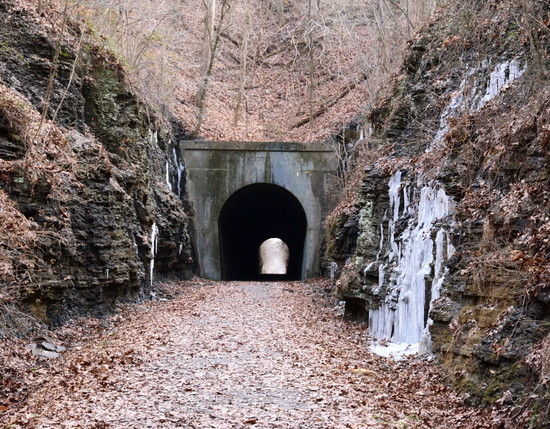 Ferne Clyffe State Park features two large waterfalls: the main falls in the park proper, and Borks Falls located in the outskirts of the park along Regent Lane. I've had bad luck here, either catching the waterfalls when they are bone dry, or when the weather isn't quite cold enough for thick ice. Nevertheless, these two falls are promising locations for viewing ice formations. 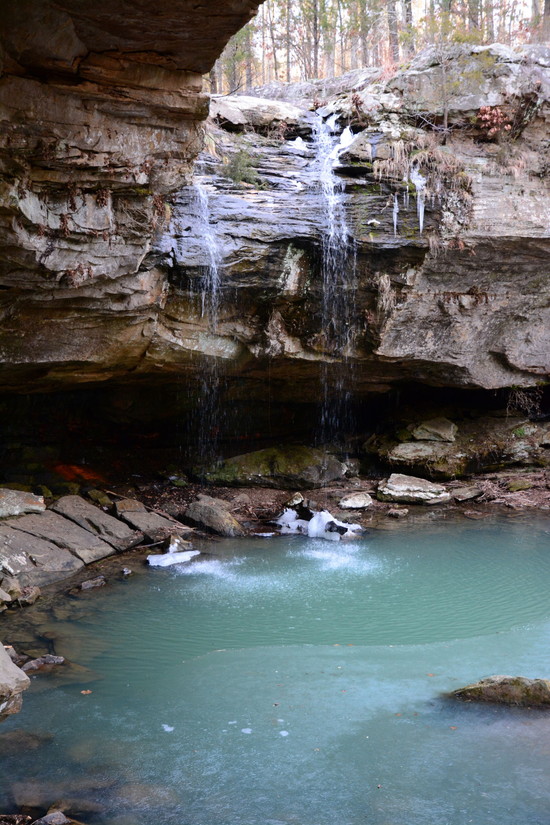 Hickory Canyons Natural Area features sandstone bluffs that are similar to the canyons found in Illinois. The two canyons in this natural area are described as the largest of their kind in Missouri. I've never caught them during icy weather, but judging by the photos captured by other hikers during the winter, they can be quite impressive indeed. 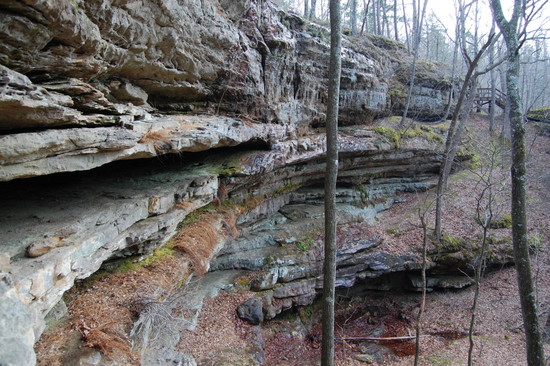 I've blogged about the scenic wonders along Route E in Madison County, especially the falls next to the road on the east side of Black Mountain. This is another spot I haven't been able to visit during the right conditions for ice, but has the potential to be stupendous on the right day. 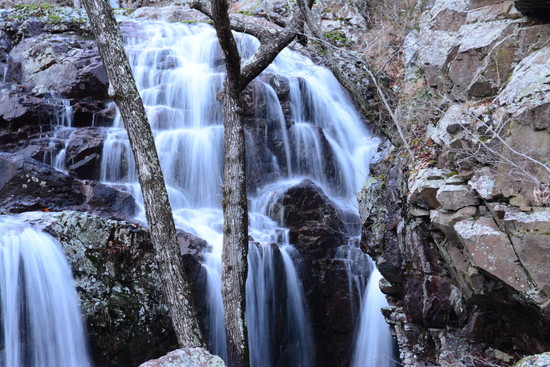