The New Bridge to Nowhere

Cape Girardeau is now home to one of Southeast Missouri's most peculiar landmarks: a bridge that leads straight into a wall. 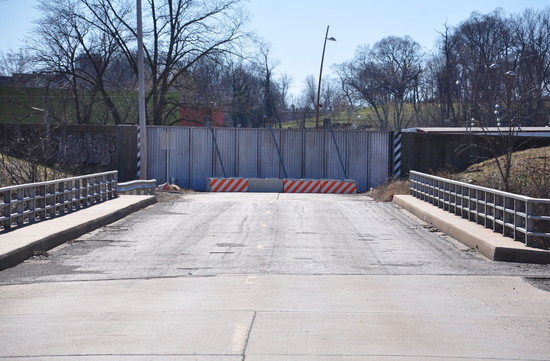 To make room for the new casino, North Main Street was rerouted to the west, leaving a dead-end bridge over Sloan Creek. The levee gate at the southern end of the bridge was recently closed, permanently barricading the street. 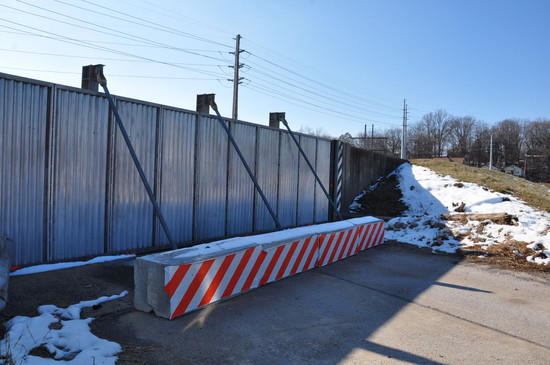 Despite the wall, the bridge is still technically open to traffic. It's a spectacle appropriate for Ripley's Believe It or Not! 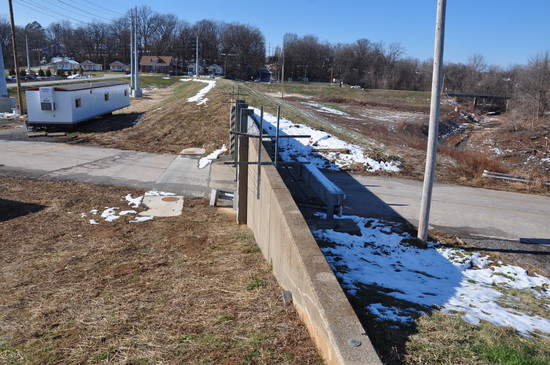 Drivers on Main Street continue to obediently follow their GPS navigation systems, putting them on a collision course with the wall. One day in January, when the bridge was covered in ice, I watched the driver of a sports car zoom down Main Street, totally unaware of the closed road ahead. Realizing the danger almost too late, the driver slammed on the brakes half-way across the slick bridge, and barely avoided crashing into the wall.

Then, a few minutes later, an ambulance driver started crossing the bridge before sheepishly backing up and executing a difficult turn in the middle of the street. 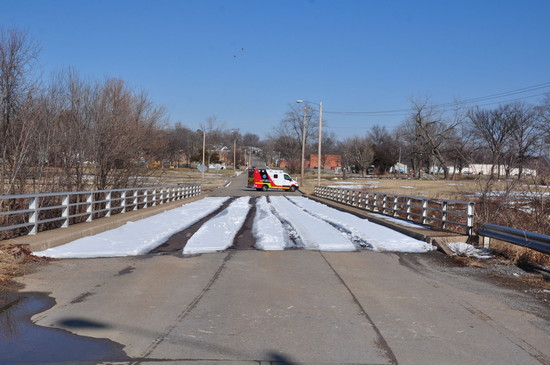 Luckily, the ambulance didn't have lights and sirens activated, so we can laugh about the situation. This won't be so funny, however, if somebody gets hurt.

The city has installed a small "Road Closed 300 Feet" sign, but the sign is located after the last intersection. How thoughtful! Main Street has been an important roadway -- hence the name -- for over a century, and it's going to take time for maps, GPS devices, and old habits to be updated to match the reality that North Main Street isn't the main street any longer. We're gonna need some bigger signs. 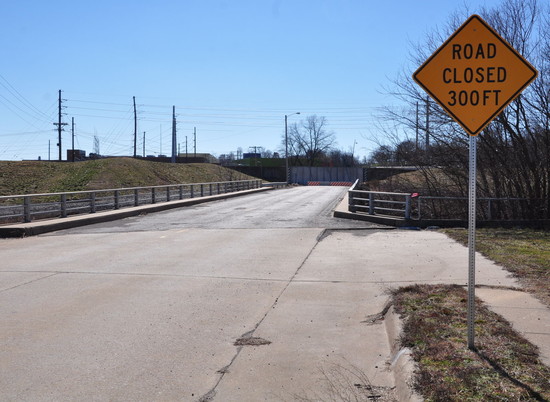 Meanwhile, our Bridge to Nowhere represents another problem. We now have a surplus of bridges over Sloan Creek, but the city is sitting on a federal earmark to build another bridge only 250 yards away from Main Street as part of the riverwalk trail extension.

In 2009, U.S. Senator Kit Bond boasted about securing $1.6 million for the riverwalk trail, a portion of which would be used to build a pedestrian bridge across Sloan Creek. Design work started at the end of 2011, but the project has been delayed, and it's possible that construction won't start until 2014.

The project isn't quite as compelling now that the city has a perfectly good bridge going to waste over Sloan Creek just a short distance away. But that's the problem with earmarks: the Congressional appropriation specifically calls for spending the money on a new bridge. It can't be used for anything other than the riverwalk trail extension.

Sen. Bond justified the earmark by claiming that the project "connects the trail into a larger city-wide trail system, which addresses safety concerns and promotes alternative modes of transportation and tourism." However, when the walkway bridge is finally built, it still won't connect to a "city-wide trail" because nearby streets (Second and North Water) are narrow and don't have sidewalks. The new bridge will provide access to Red Star Landing, but not much else, unless more money is spent on another trail extension.

In short, Cape Girardeau will soon be the home to two different Bridges to Nowhere.