I've been exploring Southern Illinois for many years, and I continue to be surprised by the tendency for spectacular natural landmarks to be located

within shouting distance of highways and railroads. You don't have to hike for miles through the wilderness to find bluffs, rock shelters, or natural arches in the Shawnee National Forest. Often they are only a few hundred yards away from the trappings of modern civilization -- but you have to know where to look.

Take, for example, the "Filmy Fern Cave" at Jackson Hollow in Pope County, located only 200 yards from a county road. 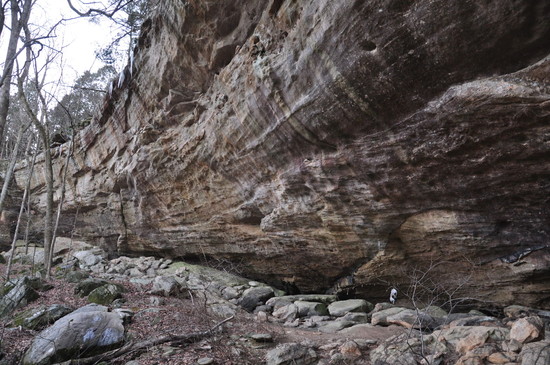 Illinois has several massive rock shelters, but this one rivals any of them. 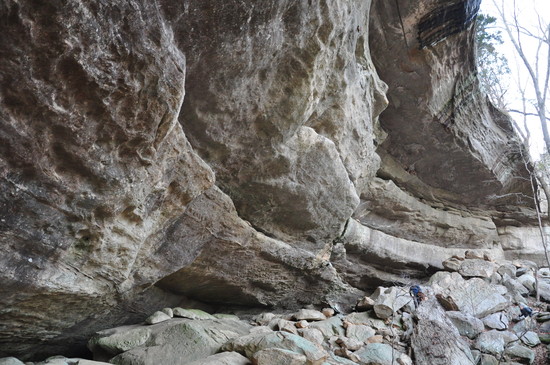 Rock shelters typically include waterfalls, and this one is no exception, but our recent dry weather has made the waterfall disappear. Nevertheless, the rock has been discolored by the flowing water, creating "fingers" in the rock that almost look painted. 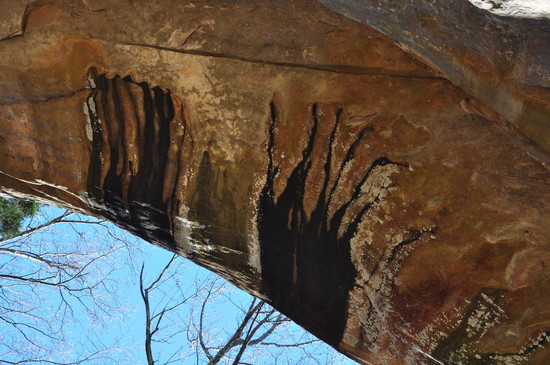 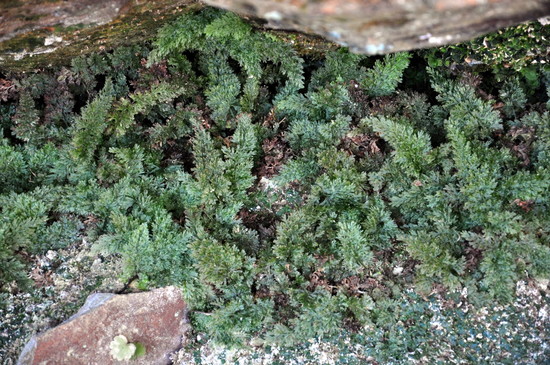 Growing at the base of the sandstone, at the far back of the shelter, this fern includes leaves that are only one cell thick in places, giving it a film-like appearance. 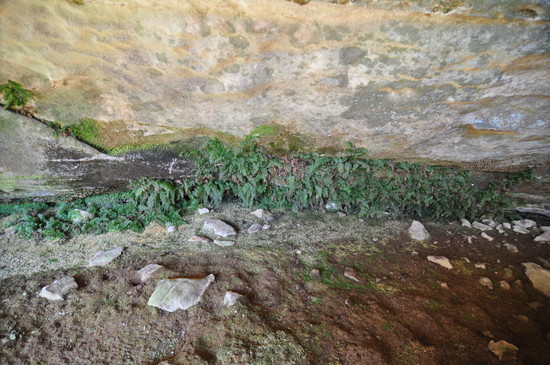 According to a fascinating report from 1961, this particular shelter features the largest known colony of filmy fern in Illinois. The author, Robert A. Evers, conducted an intensive survey of Pope and Johnson counties, walking along over 50 miles of bluffs to look for this elusive plant. 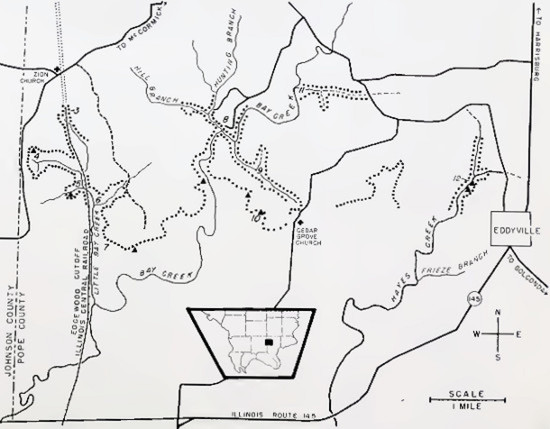 This except from Evers' survey map shows the many bluffs (dotted line) in the area along with the filmy fern colonies he found (numbered).

He had documented seven small, isolated stands of the fern in Pope County before hitting the jackpot. He writes, "After carefully examining several sizeable overhangs, I came to a huge, crescent-shaped overhang about 200 feet along the lip, more than 50 feet high at the front, and about 70 feet deep... It was difficult to reach the small vertical face at the base of the overhang because of the fragments and dense vegetation. But what a reward! Here were three sizeable patches of filmy fern, the first about a foot long, the second about 12 feet long, and the third about 40 feet!"

The botanist found more filmy fern plants here than all of the other known Illinois colonies combined. Worried about losing such a valuable habitat, he warned, "Jackson Hollow should be maintained as a nature preserve because of this fern and other rare plants which grow there." That advice later became reality with the creation of Jackson Hollow Ecological Area by the Shawnee National Forest.

In 1999, botanist John Schwegman revisited the known locations of the filmy fern, finding it at 16 of 23 localities, while also discovering two new colonies. The disappearance of the plant from 7 locations, however, painted an ominous trend for the filmy fern, which is now designated as an Illinois endangered species.

A report from 2010 mentions that filmy fern plants are "very sensitive to drought and have been damaged by over-collection, recreational activities including camping, illegal artifact hunting and rockclimbing." Jackson Hollow Ecological Area is closed to camping and rockclimbing, but the area remains open to hiking and geocaching. Hikers must be careful not to disturb the filmy fern or other vulnerable plants.

Since Jackson Hollow doesn't have any marked trails, the area continues to be secluded even though it is located within earshot of Trigg Tower Road. Drivers on the road are completely oblivious to the natural wonders in the vicinity unless they happen to see the small "Ecological Area" sign and stop to investigate. 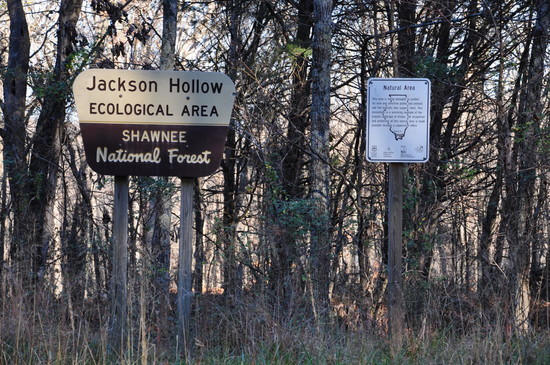 It's well worth stopping to investigate. Filmy Fern Cave is only the tip of iceberg within Jackson Hollow, but more on that in future blogs.

From Cape Girardeau, take Illinois Highway 146 east through McClure, Ware, Anna, and Vienna. Continue past the interchange with I-24 and make a left on Highway 147. After 7.5 miles, turn left on Trigg Tower Road just past the little town of Simpson. Continue on this twisty road (paved at first, then gravel) for 4.5 miles. Look for the Ecological Area sign on the right side of the road near the GPS coordinates 37.510517, -88.709300. Park on the side of the road near the sign where possible.

I mentioned that the cave is only 200 yards from the road, but that's "crow flies" distance. On foot, the distance is about a half mile (still not too shabby). Behind the sign, look for a series of rock glades running parallel to the road. Turn left and follow the glades for a short distance until you see a faint trail leading into the woods. Follow this path down into the hollow. Once at the bottom, bear left (north) and keep the bluff line to your left. Follow the bluffs, exploring the small rock shelters and crevices, until you reach the Filmy Fern Cave at the northernmost point in the hollow -- it's hard to miss. The approximate GPS coordinates are 37.516092, -88.706839.