Guided tour of the New Madrid Floodway, after the flood

Maps of the New Madrid Floodway show a feature called O'Bryan Ridge south of Wyatt. It would make sense to figure that any landmark with "ridge" in the name would be able to withstand a flood.

Well, no. In Mississippi County, a "ridge" is little more than a molehill, a piece of land that is slightly less flat than everything else. Instead of weathering the flood, O'Bryan Ridge suffered the most. When the water spilled through the floodway, the slight change in elevation was enough to create an epic waterfall.

At least, I presume it was epic. I don't think anybody was around to witness the scene. In its wake, the rush of water left behind a landscape of canyons, holes, and gullies. It's the Missouri version of South Dakota's Badlands National Park. 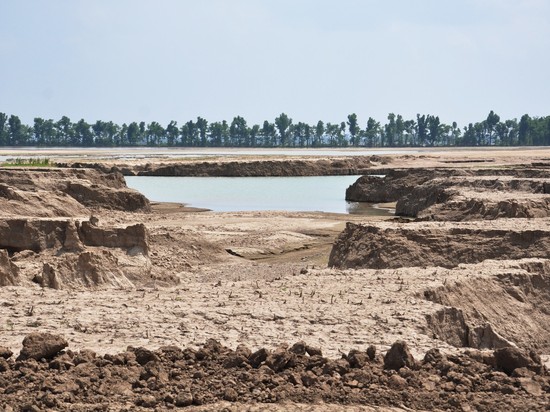 County Road 310 lies right in the middle of the badlands. Several sections of the road are now missing, replaced by deep holes. 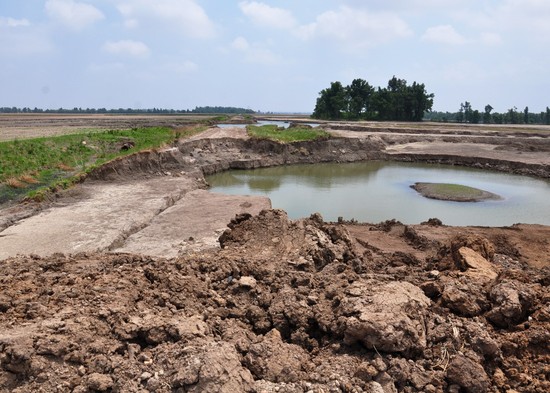 County workers have already been able to build a temporary bypass around the holes. However, the road soon reaches another, more serious, obstacle: a missing bridge over a drainage ditch. 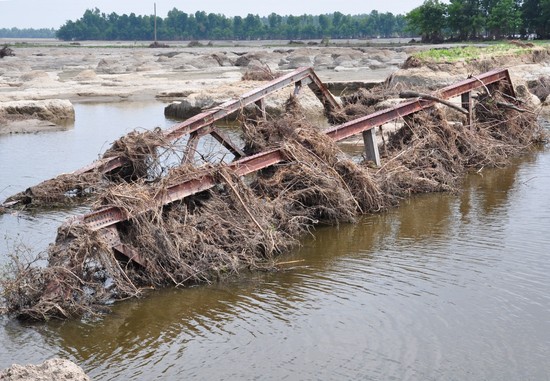 I suppose I shouldn't say the bridge is "missing." It's still located in the same spot, but has been turned into a mangled mass of metal, half-buried in debris and water. What was once a small drainage ditch has been widened into a river. When the surge came, the bridge didn't stand a chance. 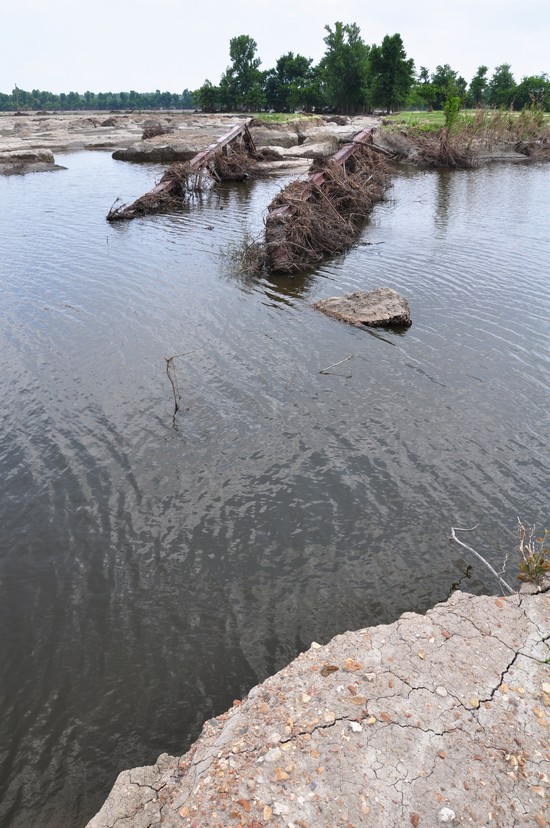 The land above and below the bridge is ruined. During the flood, this channel could have been called Mississippi River 2.0. 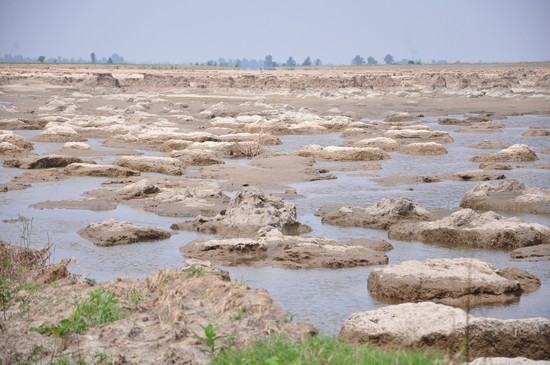 Thankfully, other parts of the floodway fared better. A couple miles to the west, I found a field that has already been planted -- with sprouts showing. The farmer's irrigation system was turned upside down, but at least the land is workable. 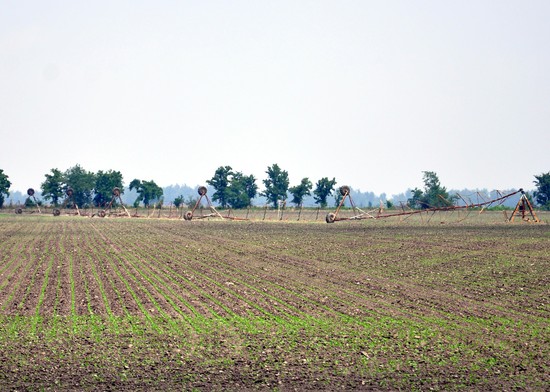 Tractors and excavators are now a common sight throughout the floodway. The farmers aren't wasting any time getting their fields back into shape, even though the floodway remains vulnerable to more floods until the levee can be rebuilt. If the weather cooperates and we don't have another flood, and we avoid an early frost this fall, there might actually be a harvest this year. 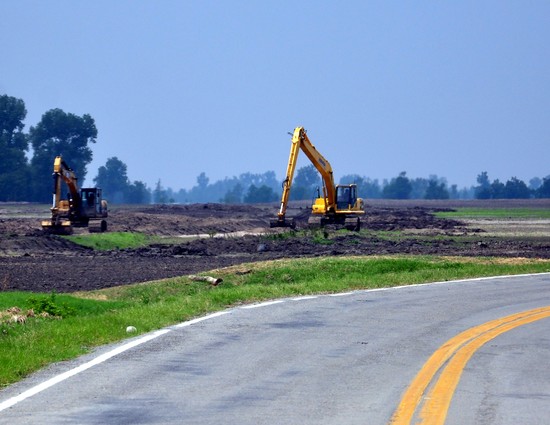 With the obvious exception of O'Bryan Ridge, it appears much of the land can be salvaged. The same can't be said for the houses and farm buildings within the floodway, however. Virtually everything is ruined. 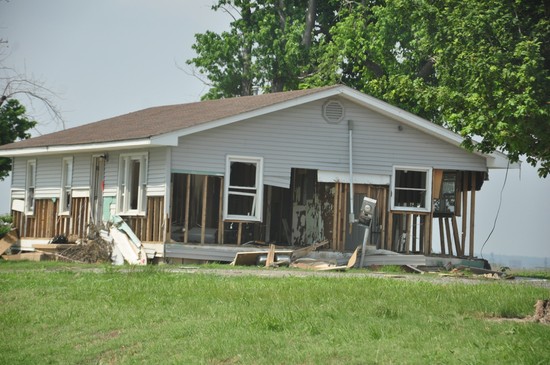 The structure damage is bad enough at the northern end of the floodway, but it appeared to be even worse at the southern end, especially near Big Oak Tree State Park. The park superintendent's house was built tall to withstand floods, but not this one. The water apparently reached well into the second floor. 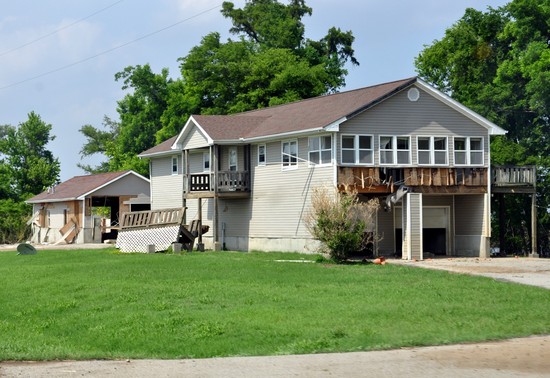 Some of the destruction is hard to distinguish from a tornado. The force of the water caused this home to completely collapse; it's a scene that could easily have been caused by a strong tornado. The only silver lining is that this family was able to save what really mattered -- the farm implements. 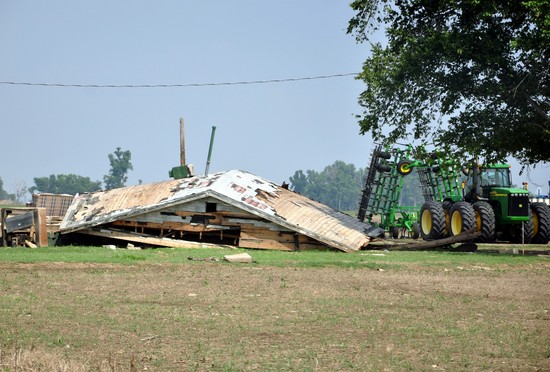 Not all of the structures in the floodway were destroyed. The post office at Wolf Island is still standing -- but that's not saying much, as the building is ruined. 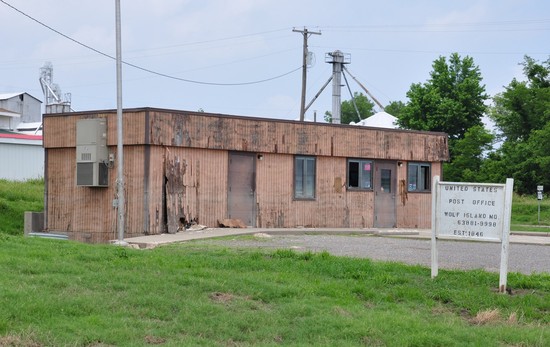 I was worried that the flood would destroy Mississippi County's collection of historic bridges. The bridge on CR 310 is probably a total loss, but otherwise the bridges I saw appeared to be in decent shape. Many of the state and county roads were in better shape than I expected, although some (like Route HH) have had the top layer of asphalt yanked away in many places.

Overall, I found that the infrastructure (roads and bridges) had fared relatively well, while homes and buildings did not. The good news is that it appears the floodway will be able to recover in the same way that it did following the 1937 flood. The bad news is that it's going to be an expensive process.