Alert reader Louise P. Ogg of Unity, Illinois, found a news clipping from 1930 providing more background on Devil's Island near McClure, a place that I wrote about in February.

The newspaper story, published Sept. 11, 1930, in the Cairo Evening Citizen and Bulletin, relays a local legend about how the island was formed. Here it is:

DEVILS ISLAND WAS STARTED BY A SUNKEN BOAT

Body of Rich Land in Mississippi River Near McClure

McClure, Ill. -- Devil's Island is about a mile north of the McClure post office. It is completely surrounded by water.

The eastern water course is called Devil's Chute. According to Scott McRaven, an old time resident of the McClure bottoms, there is a tradition that a cargo of ingot lead was being towed up the Mississippi from Pittsburgh to St. Louis and it sunk. Soon a sand bar started around it and Devil's Island had its beginning. "Be it as it may, it is a pretty story," said Mr. McRaven.

The island now has two thousand acres in it and is a very valuable piece of farm land owned by Ernest Caldwell.

Vast fields of corn, cucumbers, wheat, pasture land, hay, tomatos and spinach are grown over there and either shipped away on the Mississippi river or brought across the chute and disposed of in McClure.

There are several fully equipped tenant homes on the island, good roads, plenty of large trees and coons, opossums and foxes. Truly it can be said, "Little drops of water, little grains of sand, make a might ocean and a pleasant land."

This explanation seems unlikely, however, as old maps from the 1700s suggest that the island was already well established. The following map from 1770 shows two large islands above "Cap Girardo". The largest appears to be modern-day Devil's Island while the smaller island is probably Windy Bar. 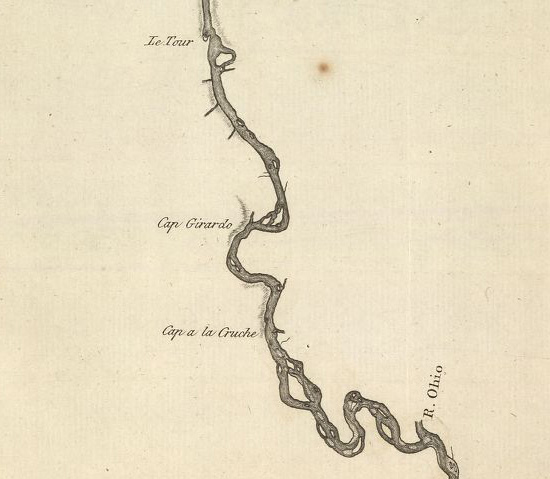 An earlier map from 1702 also show several islands, although it's hard to match these to modern-day locations. It appears that "Cap de roche blanche" is now Gray's Point (Cape La Croix), which would mean that the larger island shown upstream is Devil's Island. 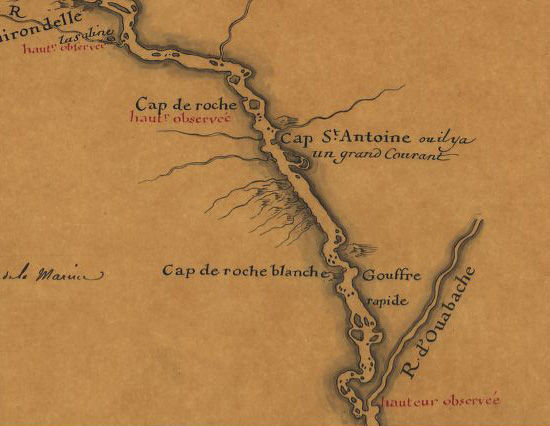 Coincidentally, while searching Google, I found that Devil's Island is mentioned in Mark Twain's Life on the Mississippi. Twain quotes Uncle Mumford, "There at Devil's Island, in the Upper River, they wanted the water to go one way, the water wanted to go another. So they put a stone wall. But what does the river care for a stone wall? When it got ready, it just bulged through it."

I'm assuming this is the same Devil's Island, although there may have been more than one. In those days, Satan was a popular source for placenames.