"How long have you been following it?"

I parked next to the boat ramp at Thebes, Illinois, hoping to catch a glimpse of a train crossing the Thebes Bridge.

Not just any train, but the Union Pacific Railroad's Challenger No. 3985, the world's largest operating steam locomotive. It was Jan. 22, 2004, and I just heard that the locomotive would be passing through Thebes and Scott City on its way to Houston as a promotional gimmick for that year's Super Bowl.

I'm not that big of a rail fan myself, but I thought it would be a good photo opportunity to catch the locomotive as it crossed the mighty Thebes Bridge. I wasn't the only person with the same idea: a group of rail enthusiasts were already waiting at the boat ramp.

One guy asked me, "How long have you been following it?"

I wasn't quite sure what he meant at first, but then it dawned on me. These rail fans had been following the locomotive for several days as it traversed the Midwest, almost like groupies following a rock band on tour.

The guy seemed disappointed when I answered that I was merely taking a lunch break and this would be my first and only glimpse of the Challenger. He had been following it from St. Louis, running ahead to get pictures at various spots.

Somebody else said he had taken a few days off work to follow the locomotive across Missouri, Illinois, and soon Arkansas. Meanwhile, a retired couple also explained they had been trailing the locomotive for quite a long distance in their RV.

The train was running behind schedule, adding to the anticipation, but also making a mockery of my scheduled lunch break. All of a sudden, we heard a rumble in the distance and the rail fans prepared their high-dollar photo equipment. The locomotive arrived, puffed some clouds of steam, quickly crossed the bridge, and was out of sight all too soon. 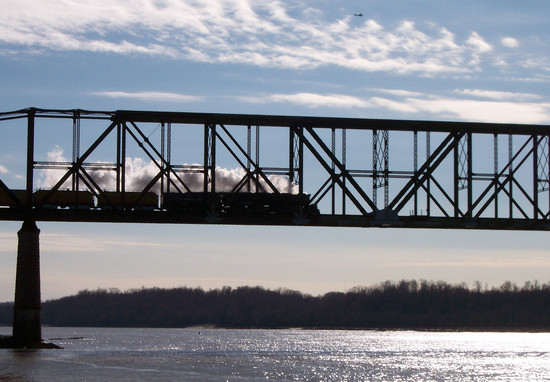 Was it worth the wait? The Challenger is an impressive machine, for sure, and it made the Thebes Bridge shake and rattle like an earthquake. But the real spectacle was the rail enthusiasts after the locomotive disappeared. They dismantled their photo gear in a well-practiced flurry and dashed to their vehicles.

"It's going to stop for a break in Scott City. If we hurry, we can intercept it at Rockview Junction!" somebody announced.

It's amazing how much enthusiasm train buffs have for their hobby. It seems like a fun pursuit, the opportunity to chase a piece of history -- literally. And it's a good excuse for a roadtrip.

Hopefully, though, it won't be necessary to take a long roadtrip to see the steam locomotive again. As part of a clever marketing campaign, Union Pacific has put together four possible routes for an excursion of either their Challenger or No. 844 steam locomotives. The route with the most votes will win, and right now the "Little Rock Express", which would pass through Southeast Missouri, is in second place.

Voting runs through Jan. 17, so vote early -- and vote often!