And now for something completely different from this blog...

This Sunday marks the 14th birthday of this website. It all started on Dec. 19, 1996, when the semissourian.com domain name was registered.

At least, that's how it feels when looking back at the oldest versions of this website. The screenshots seem so primitive, so 1990s.

It's not clear exactly when the website was first posted, but the May 18, 1997, newspaper included a big feature on the newborn website. "Surf's up! Come on in, the water's fine" announced the front page of the paper. The story included a screenshot of the website's home page: 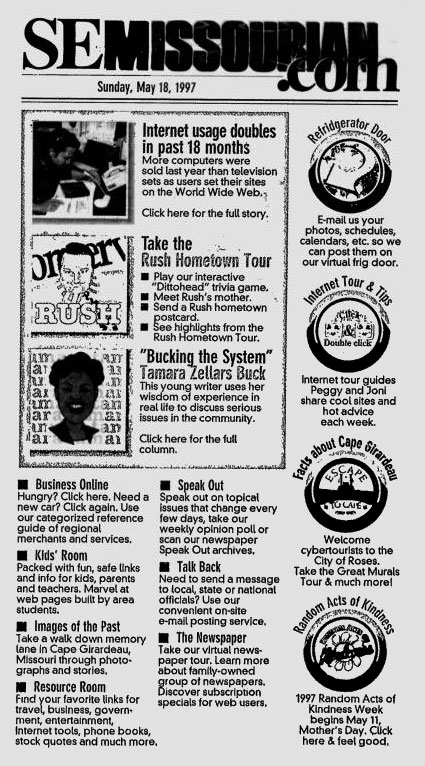 Cape Giradeau has certainly changed since then. The newspaper's lead story was the retirement of Barbara Blanchard as principal of Washington School.

The main attraction on the website was the Rush Limbaugh section, highlighted by the "Rush Limbaugh Hometown Tour" and "Are You a Dittohead? Trivia Quiz."

Most of the original files from the first website have been lost. I did stumble across a faded memo from 1996 or 1997 with the title "Proposed web site for semissourian.com." This document lists several ideas for the website, with the Rush Limbaugh section at the top of the list. Also discussed: Escape to Cape tourism section, Talk Back tool for sending letters to elected officials, and, of course, Online Speak Out page.

Curiously, one very important item is missing from the proposal: actual news stories from the newspaper.

It appears that the website was redesigned by 1998. This version can be seen on the Internet Archive's Wayback Machine. By now, the website proudly announced that it was "optimized for Netscape Communicator 4.0 and Internet Explorer 4.0 and above." Ugh! 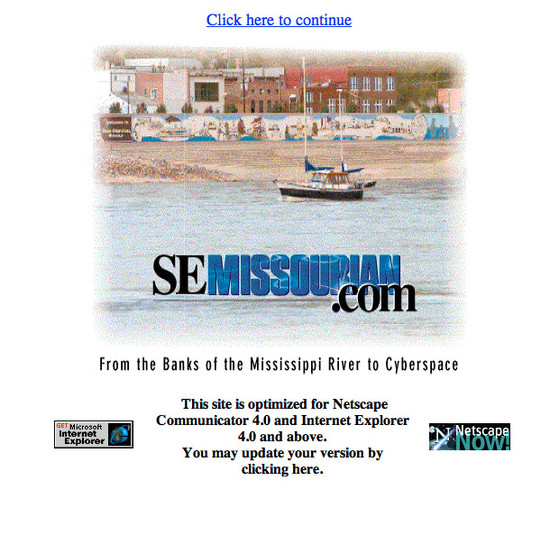 In 1999, the site was redesigned again (remember what I said about "web years"?). Now it featured actual news stories. One thing I can't explain is why "Casinos" was the number one item under Local Hotlinks: 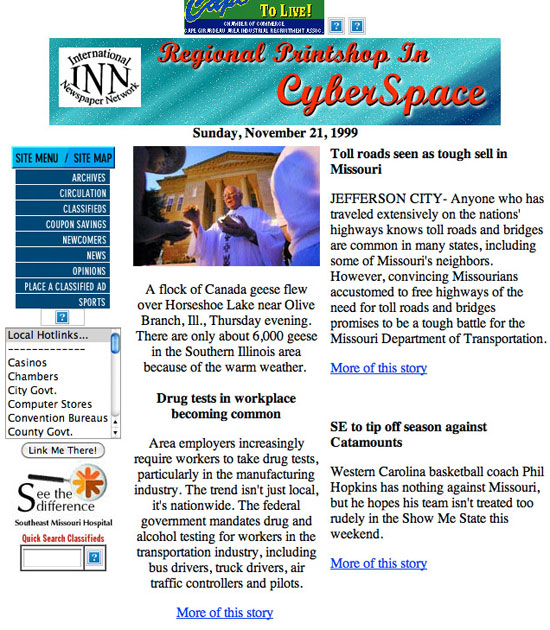 I started working part-time in 2000, taking over as webmaster from Jaysen Buterin. I arrived just in time for yet another site redesign. This was right before the November 2000 Election That Seemed Like It Would Never End Thank You Florida. 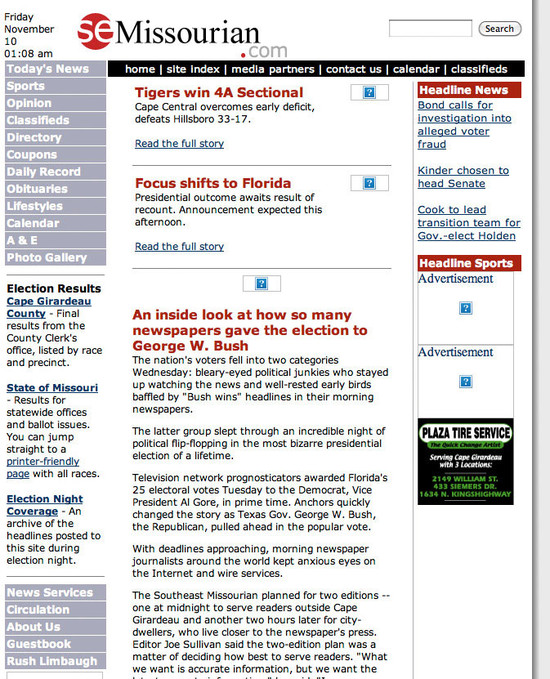 The following year, we posted photo galleries of high school proms. The feature was an instant hit, although the extra traffic kept causing the webserver to crash. That wasn't a fun week.

September 11th wasn't fun either. We saw quite a bit of site traffic as we posted photos of New York City hot off the wire from the Associated Press.

Since then, the website has been redesigned and upgraded numerous times. We've outlived some websites (Pets.com and GeoCities come to mind), while other sites (Twitter and Groupon) have come out of nowhere. With the rate that the Internet continues to change, it's hard telling what will come next -- even next week is a mystery.

However, I can guarantee one thing that will never change at semissourian.com: We'll always have Speak Out.