Well, I've been a fool. For years, I've been driving 35 mph, the posted speed limit on Bloomfield Road, only to learn today that the legal limit is actually 60 mph outside of the city limits.

And what about other county roads in Cape Girardeau County? It seems that many of those "SPEED LIMIT 35" signs throughout the county are bogus and unenforceable. 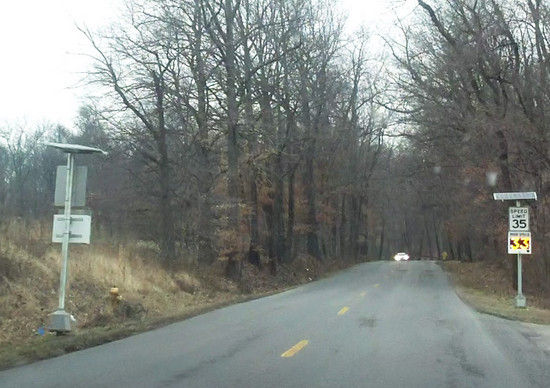 Here I am, foolishly driving 27 mph under the speed limit.

Not so fast, though. Missouri does have this curious law in the books (Section 304.010):

"For the purposes of enforcing the speed limit laws of this state, it is a rebuttable presumption that the posted speed limit is the legal speed limit."

"Whenever official traffic-control devices are placed in position approximately conforming to the requirements of the law, such devices shall be presumed to have been so placed by the official act or direction of lawful authority, unless the contrary shall be established by competent evidence."

So now it seems that the Bloomfield Road speed limit might be enforceable after all. But wait, there's more!

Section 304.321 states, "No person shall place, maintain or display upon or in view of any highway any unauthorized sign, signal, marking or device which purports to be or is an imitation of or resembles an official traffic-control device or railroad sign or signal, or which attempts to direct the movement of traffic, or which hides from view or interferes with the effectiveness of an official traffic-control device or any railroad sign or signal."

The law also includes this clause: "Every such prohibited sign, signal or marking is hereby declared to be a public nuisance."

What a tangled mess. Without a proper county ordinance in place, it could be argued that the existing speed limit signs are a "public nuisance" and must be removed.

Or maybe not. Looking closely at the city limit map of Cape Girardeau, it appears that Bloomfield Road actually enters the city limits at more than one place. The city annexed some of the land along the road during 2002, 2006, and 2007, creating a crazy patchwork quilt of boundaries near Dalhousie Golf Course.

At those places where the road is within the city limits, then the city -- and not the county -- would have authority to impose a speed limit. The city's standard "30 MPH UNLESS OTHERWISE POSTED" rule might apply. 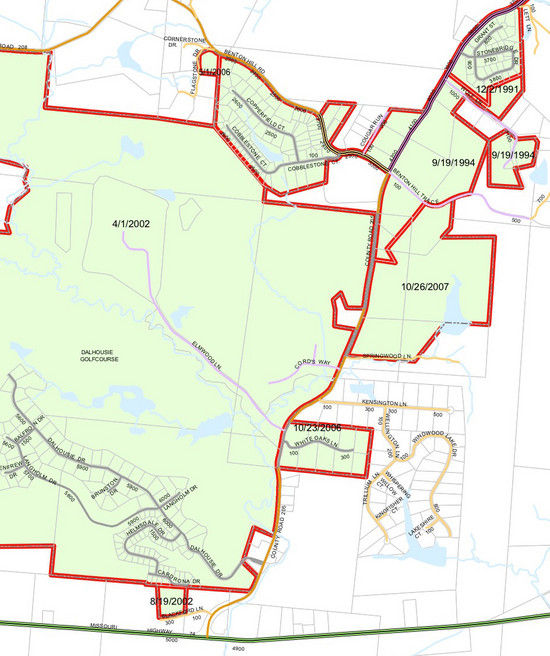 This map shows the recent city annexations along the outer portion of Bloomfield Road. It's a gerrymandered maze.

So what's the actual speed limit along Bloomfield Road? Don't ask me, I'm not a lawyer.

I do know one thing. If you drive the road carefully at 35 mph, some maniac will always appear out of nowhere and start tailgating, soon to be followed by 12 other maniacs.

If you drive 60 mph, you will outrun the tailgaters -- until you crash into a tree.

We could solve this problem by building a new, safer highway to divert the heavy traffic away from historic Bloomfield Road. Hint, hint.

Speaking of historic Bloomfield Road, I'm giving a presentation this Monday to the Stoddard County Historical Society at Bloomfield. Topics will include the history of the Bloomfield and Chalk Bluff roads, as well as the construction of Highway 25 between Advance and Bloomfield.