Everything you wanted to know about New Bourbon, Missouri

Construction has started on a dollar-intensive project to build a "New Bourbon Port" along the Mississippi River in Ste. Genevieve County.

But where exactly is New Bourbon? What's the story behind the strange name?

The original town of New Bourbon was located a few miles south of Ste. Genevieve. Modern maps, if they show it all, place New Bourbon just west of the intersection of Highway 61 and Bourbon Road, near Loida Ag Services. 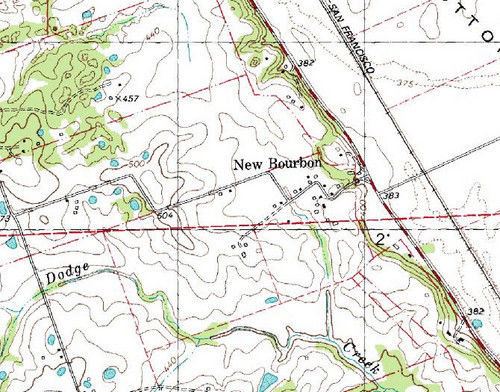 Bourbon Road has the appearance of an ancient road, with a deep cut through the hill plus several sharp curves. 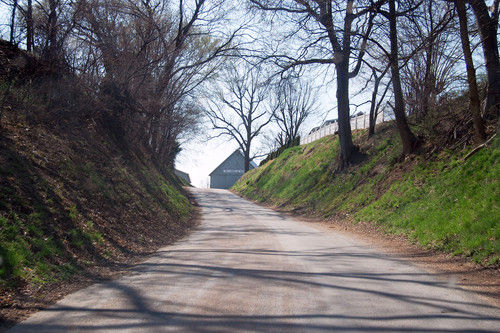 On the opposite side of Highway 61, Cottonwood Road runs to the northeast toward the river and the site of the future port. Lying in a floodplain, the area is mostly empty farmland. 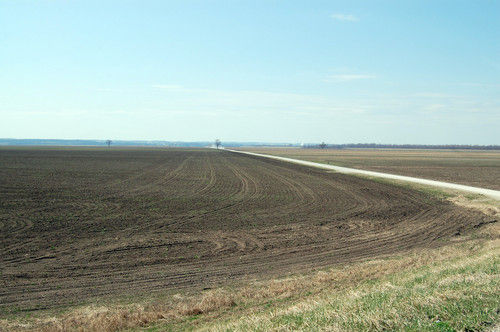 This is Cottonwood Road looking toward New Bourbon in the distance.

It's hard to believe that this was the site of a bustling town. The Census of 1799 reveals that New Bourbon had a population of 560, slightly larger than Cape Girardeau with a population of 521. (These numbers probably include surrounding areas and not just the town proper.)

The story behind New Bourbon starts in France during the French Revolution. Following the storming of the Bastille in 1789, the French aristocracy realized that their days were numbered. Some fled to America, avoiding the guillotine that was soon to be used on King Louis XVI.

Nevertheless, some of the immigrants remained in Ohio and were able to persuade the U.S. government to grant them land. Their settlement was called Gallipolis, a town that still exists on the banks of the Ohio River. Conditions, however, were terrible, with swampy land giving rise to disease.

This is where the story gets complicated. One of the Gallipolis immigrants, Pierre De Hault De Lassus De Luziere, came from a background of European nobility. He had been, according to one account, a member of the council of the King of France, and inherited an estate with an annual income of 30,000 crowns. I don't know what the crown-to-dollar exchange rate would be, but De Lassus was quite wealthy until the French Revolution ruined everything.

De Lassus had been childhood friends with Baron de Carondelet, the Lieutenant Governor of Upper Louisiana in 1793. At this time, Upper Louisiana -- including modern-day Missouri and other states -- was controlled by Spain.

The Spanish were on the lookout for "warm bodies" to settle in the territory and provide a buffer between the Americans on the east and the Osage Indians on the west. Carondelet hoped that De Lassus and other Gallipolis refugees could be some of these "warm bodies" and relocate to Louisiana.

Convincing an unhappy group of French bluebloods and urbanites to move to the edge of civilization wasn't easy. Carondelet set aside a chunk of land as their new home, calling it Nouvelle Bourbon (New Bourbon). This was a clever piece of propaganda, as "Bourbon" referred to the royal dynasty that had controlled both France and Spain. When King Louis XVI of France was beheaded on January 21, 1793, the royal bloodline was still alive in Spain under the crown of King Charles IV. Carondelet figured that the French immigrants would be more at home under the Spanish monarchy rather than American democracy.

De Lassus moved with his family to New Bourbon, arriving in August 1793. However, it appears that none of the other Gallipolis residents made the journey west. Perhaps they were worried about getting swindled again, or maybe they had heard rumors about Missouri's heat and humidity.

The De Lassus family did well in Louisiana. Pierre was immediately appointed as the commandant of the Nouvelle Bourbon district (including the town plus the prosperous lead mines at Mine La Motte). His son, Carlos, would become the Lieutenant-Governor of Upper Louisiana in 1799, a post he would hold until the Americans took over during the Louisiana Purchase.

New Bourbon grew during the 1790s as settlers moved into Upper Louisiana. Francois Valle built a mill near New Bourbon, described by one source as the "first mill west of the Mississippi", on what became Dodge's Creek.

In 1799, the residents of New Bourbon raised money to give to the King of Spain as a "patriotic war contribution." The total amount donated was 565 piastres, although I have no idea how much this would be in dollars. The list of donors is included in Louis Houck's History of Missouri and provides a detailed record of (most) of the people who lived there, featuring an eclectic mix of French, Spanish and American names.

After the Louisiana Purchase, New Bourbon declined as the town's population and importance was absorbed into nearby Ste. Genevieve. With the river port now under construction, the New Bourbon name will live on, even while the town is long gone.