Want to visit a giant hole in the ground?

Wayne County features a massive sinkhole and underground lake known as the Blue Hole. It's also called "The Gulf," an accurate name for the deep void that opens to the surface. 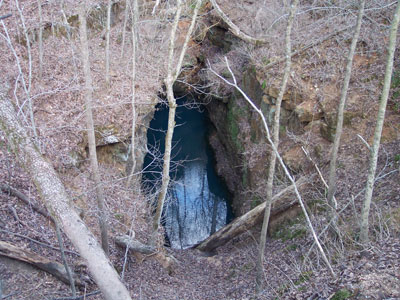 This isn't the kind of destination that you would want to spend all day driving to. However, if you're already heading to Clearwater Lake, Current River, or somewhere else in the Ozarks, then this site south of Piedmont is a nice little diversion.

When you first pull into the parking area, you're greeted by an ominous chain-link fence to prevent people and animals from accidentally wandering into the hole. After entering the gate, it's only a few feet to the rim of the sinkhole. The rim is 40 feet above the surface of the water below. Watch your step!

What you can't see is even larger. According to the book Geologic Wonders and Curiosities of Missouri, the Blue Hole opens into a cave that extends for another 500 feet beneath the hillside. The water is even deeper within the cave, with divers exploring the underground lake to a depth of 200 feet. 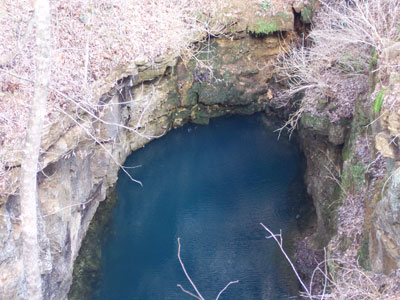 A close-up of the water's surface at the cave entrance

For the adventurous, a difficult path leads down into the sinkhole and the edge of the water. Anything beyond that will require a boat and caving equipment.

1. Take Highway 34 west to Piedmont, a distance of roughly 75 miles from Cape Girardeau.

2. In Piedmont, follow Highway 34/49 south for 7 miles, and then turn left where Highway 49 branches off.

3. Drive 2 miles south to Mill Spring and make a right (following Highway 49) at the stop sign in town.

4. Go another 2 miles and look for the turnoff for Carson Hill Cemetery Road on the right. Follow this gravel road up and over the hill for roughly two miles.

5. Keep your eyes peeled for Blue Hole Road on the right. If you reach a low-water bridge, you've gone too far. Blue Hole Road is a rough gravel road, but it's only a short distance to the parking lot.

What: Sinkhole and underground lake

Topographic map: Mill Spring (where it is marked)