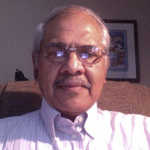 Kamath's Corner
Prabhakar S. Kamath
I am 70 year old, naturalized American originally from India. I am married, father of two grownup boys. I am a retired psychiatrist. I practiced psychiatry for 40 years till my retirement in 2010. My main hobby is writing. I write for various blogs and newspapers. I have written three books, one on stress. I have lived in Cape Girardeau for over 35 years.
Recent posts
Archives

Trump supporters are not known for their brilliance. Therefore, I will try to explain to them what is meant by Quid Pro Quo by means of a story:

Imagine that a Sheriff was elected with the illegal help of a rich divorced man. One day a beautiful woman complains to Sheriff that her ex husband, the rich divorced man, was beating her up and threatening to kill her. She wanted to buy a gun for her own protection and wanted Sheriff to issue her a license.

Now Sheriff wanted to screw this woman in return for any help he could render her for her protection. He starts hitting on her. When the woman balks, he tells her, "I will gladly issue you the license to buy the gun. I want you to do me a favor though." When the woman resists, he tells her, "You don't want anything to happen to your beautiful face, right?" The woman was left wondering who might hurt her -Sheriff or her ex husband.

The woman records this conversation and reports this matter to F.B.I. When F.B.I. interrogates Sheriff, he denies he ever asked her a favor in return for issuing her license. "No Quid Pro Quo!" he says repeatedly, "NO Quid Pro Quo!"

Even a person with intelligence of a mentally retarded person would say, "This is a clear-cut case of Quid Pro Quo. Sheriff withheld issuance of license to the beautiful woman because she refused to submit to his carnal desire. Case closed."

But, tell this to Trump supporters and Trumpian lawmakers, and they would say, "There was no Quid Pro Quo here!"

Well, what does that tell us about these people?