The Irony Of It All
Brad Hollerbach
Brad Hollerbach is the Director of Information Technology for the Southeast Missourian. His opinions are his own and do not reflect those of the newspaper or its editorial board. He writes this blog primarily for his own amusement and to parody the absurdities of the world we live in. He lives with his wife and two cats that don't really care for one another in Cape.
Recent posts
Archives

University To Raze Broadway Buildings.
Gee, I Didn't See That One Coming.

The University sent out a press release Monday night announcing that its Foundation had acquired two buildings on Broadway and Pacific -- the old Howard's property and the gas station across from it.

Gee, I never saw that one coming.

The University didn't beat around the bush about their plans for the properties.

They're going to tear them down for parking. No surprise there.

The press release also says that after razing, the University plans "to incorporate landscape features into the properties to make them aesthetically pleasing to the community."

According to my "Big Book of SEMO U-Speak," that normally means a fountain. Hopefully, they will hold off for a while before they put in any water features. We wouldn't want the University to look like it's being overly-extravagant with the economy so gloomy, now would we?

I do find it refreshing that the University has so quickly let everyone know its plans. Usually, buildings that SEMO is planning on razing just disappear overnight with a fully functional parking lot appearing in their place the next morning.

It's as if the University under the cover of darkness, hustles these properties out of town and moves them elsewhere as a part of some Witness Protection Program For Buildings.

Perhaps, the Howard's property knows some dirty little secret about nearby Houck Stadium that the University doesn't want to get released to the general public. I wonder what that could be?

Maybe, it knows that the University has had a losing football team for 16 of the last 18 years and no matter how much money is thrown at the program it will always be a second-rate Division I punching bag and that the University would be far better off to convert the entire stadium to parking which would benefit a much greater percentage of the student body.

No. No, that can't be it. That's common knowledge. No secrets there.

And besides, where would Cape Central High School play their football games?

Maybe in some alternate universe a Witness Protection Program For Buildings exists, but not in this one. I've seen the truth. The University tends to hire extremely efficient contractors who can take a building that has stood for a hundred years, surviving snowstorms and tornadoes and generations of families, and make it disappear in a day.

Don't get me wrong. I'm not an "old-house-hugger." I believe in appropriate remodeling and restoration, but not remuddling old properties. I would not want to live in a museum. I appreciate good architecture, and being the co-owner of three old houses -- 1908, 1914 and the 1920s -- I respect the quality of the workmanship from times-gone-by.

But as far as these two building are concerned -- 834 and 900 Broadway -- I have no personal attachment to either one of them. I was in Howard's a couple times during college, but have not been in that store in 20 years. And I never used the service station. To be honest I thought it was closed all this time.

Architecturally, I find the Howard's building pretty boring. If the University wants to knock it down for a dozen parking spots, it wouldn't bother me at all. But, I'm not a historian. Maybe they should consult with someone from the History Department's Historic Preservation Program before they raze away.

Now, the gas station is another matter. It is unique. Decrepit and in dire need of some TLC yes, but definitely unique.

I ask you, when have you ever seen a building with a fin?

With the help of the Southeast Missourian's ace librarian Sharon Sanders, I learned a few interesting facts about this piece of property.

That location has been home to automotive-based businesses for a long, long time.

In 1920, a tire store was located at that corner of Pacific and Broadway. In 1925, old city directories indicate that it was the Blattner Service Station. In 1942, it was listed as Schwab's City Service.

I've attached an undated photo of the building that the paper has in its archives. It definitely looked different than it does now. 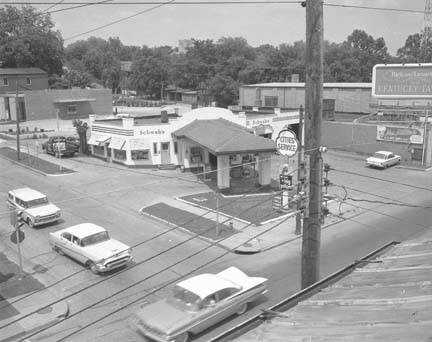 It appears that sometime in the 1960s, the owners became associated with Gulf Oil. I'm guessing that's when the station's distinctive porcelain skin and its giant fin were added. From looking at the pictures, it's hard to tell if the original building was completely razed at that time or if it was just given an extreme makeover.

After the then owner's death in 1974, the business apparently became a Sinclair station. At some point, the station quit selling gas and focused on just repair work. I saw in the paper that the contents of that business were auctioned off a couple weeks ago in anticipation of the property being sold.

My guess is there is little historic merit to the gas station. Unique, yes. Historic, no.

But if there is even a glimmer of merit, then what better way for the University to honor the station's unique local contribution to America's automotive history than by knocking it flat and replacing it with a dozen or so parking spots? That sort of maintains the property's automotive heritage.

I just hope in some alternate universe, the building makes it into a Witness Protection Program. 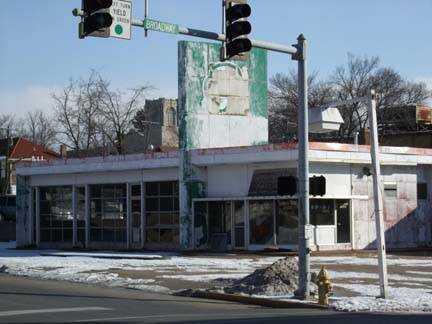 834 Broadway as it looks today.

View 14 comments or respond
Community discussion is important, and we encourage you to participate as a reader and commenter. Click here to see our Guidelines. We also encourage registered users to let us know if they see something inappropriate on our site. You can do that by clicking "Report Comment" below.