Recalling the 1844 flood and the strange occurrences of 1811 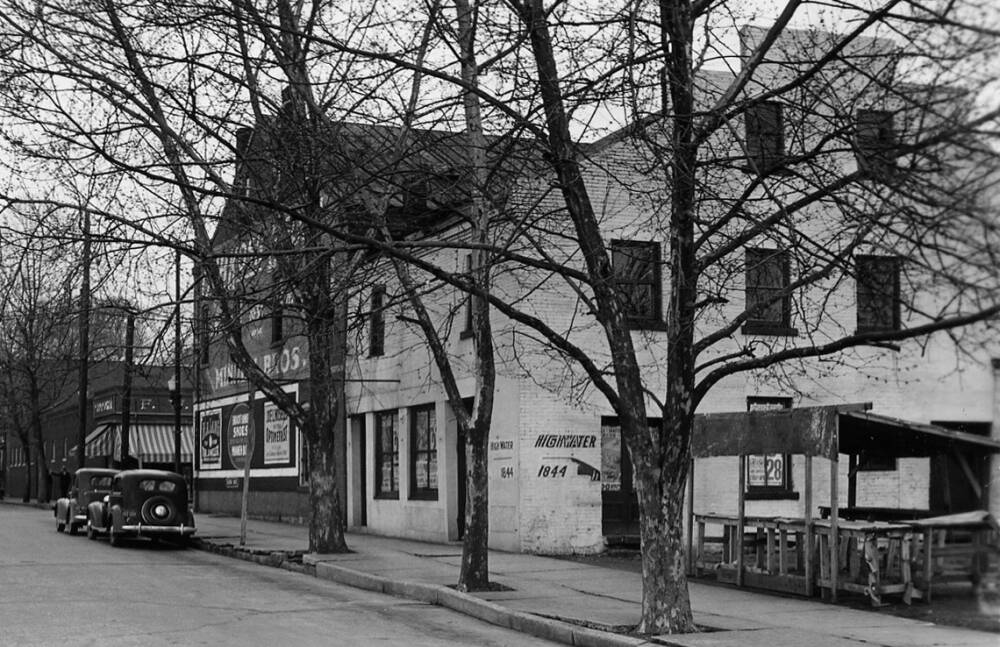 For many years the white building at right on Independence Street was silent witness to a record-setting flood. In 1844 the Mississippi established a modern flood record of 42.53 feet at Cape Girardeau. A river man rowed his skiff alongside this structure, the Albert building, and drove a nail into the wall at water level. Later, at the suggestion of Louis Houck, the nail was replaced by a painted line and the words "High water 1844." (G.D. Fronabarger ~ Southeast Missourian archive)

If you're a faithful reader of the Southeast Missourian's "Out of the Past" column, you are following the progress of river floods in both 1922 and 1947, 100 and 75 years ago, respectively.

In both of those years, Cape Girardeau was unprotected from river flooding. Daily, the Southeast Missourian reported on its front pages the progress of the floodwaters, as they slowly inched north along Water Street, Independence Street and Main Street. The flood of 1922 reached 38 feet at Cape Girardeau, while the 1947 crest was 41.88 feet. (Those crest measurements were from the Army Corps of Engineers.)

The day the river crested in 1922 -- April 22 -- the Southeast Missourian published an article recalling earlier floods in Cape Girardeau.

In endeavoring to find some definite history of the flood of 1844, by which all later floods have been measured, it seems impossible to secure other than vague mentions of it.

Miss (Sadie) Kent, librarian at the State College, found references to the flood in not less than a half dozen volumes, but none gave any measurements that could be used today, and none referred to the effect of the flood upon Cape Girardeau.

Switzler's "History of Missouri," a volume based upon several previous works, has more to say of floods than any of the other books. It says in part:

"A most remarkable and disastrous rise in the Missouri, Mississippi and Illinois rivers occurred in 1844." The rivers commenced rising about the 8th or 10th of June. The levee at St. Louis was soon covered and by the 16th the curbstones of Front Street were under water. Illinoistown and Brooklyn (now known as East St. Louis) were nearly submerged. The American Bottom was a turbid sea. The river reached its highest point in St. Louis on June 24, when it was seven inches above the city directrix.

The water did not reach its abatement there until July 14. The rise of 1844 obtained a greater elevation than any previous similar event. The great flood of 1785, known as L'annee des Grandes Eaux, -- the year of the great flood -- was surpassed, as were the floods of 1811 and 1826.

History records that the town or "post" of Ste. Genevieve was located by its first settlers in the river bottom three miles south or southeast of its present site. It was completely inundated in 1785, l'annee des grandes eaux, when the inhabitants were driven for safety to the elevations, and founded the present town.

"Rozier's History of the Early Settlement of the Mississippi Valley," written by Sen. Firmin Rozier of Ste. Genevieve, in 1890, makes reference to the flood of 1844, saying "it was caused by immense rains that fell for 40 days and nights, also accompanied by the melting snows from the mountains, which gave the river the appearance of an immense sea. Opposite this city (Ste. Genevieve) the waters reached to the bluffs of Illinois, which could be reached by steamboat."

In 1844 there were no levees to hold the water in the channel as there are today and it has been said that the river at Cape Girardeau extended to the hills several miles inland in Illinois. Under such a condition it took a volume of water several times as great as the river carries today to bring it to the marks established by the 1844 flood.

The Rozier history has much to say regarding the flood of 1811, which was only exceeded by the flood of 1844. "The year 1811 was truly a memorable one for the inhabitants of Upper Louisiana," the history relates.

Early that year a comet of "exceeding brilliance and long duration" appeared. "It was one of the remarkable comets of the world and filled the simple people of this region with wonder and awe. It was very large and bright and possessed a tail of wonderful length and brilliancy. An old tradition, prevalent in this colony, predicted astonishing and miraculous heavenly appearances about this time, which this comet seemed to fulfill, hence there was no little alarm felt for the country visited by this blazing precursor of fate. In this belief the superstitious of upper Louisiana...looked upon the phenomenon as presaging some dreadful occurrence."

In the summer of 1812 came a flood second only to the flood of 1844 and then in December of the same year occurred the earthquake of New Madrid that affected this section of the Mississippi Valley.

It is of particular interest to note that the present flood was preceded by earth tremors of more severity than any known since the great disturbance of 1811 and there are many people in this district who are predicting that this is to be a year of "dreadful occurrences."