In December 1971 a tornado touched down in Scott City, killing one man and injuring 24 others. The Missourian newspaper recently published a story about that disaster.

The storms that spawned that twister Dec. 15, 1971, also made it as far north as Perry County, Missouri. By far the greatest damage done there was to Grace Lutheran Church in Uniontown, then 96 years old. The following day, the Missourian ran a front-page article about the church, as well as a page of photos taken by Missourian photographer Stephen Robertson.

A search through the Missourian archives revealed four sleeves of negatives taken by Robertson at Uniontown. They're just too good not to use, so I have assembled them in a photo gallery. 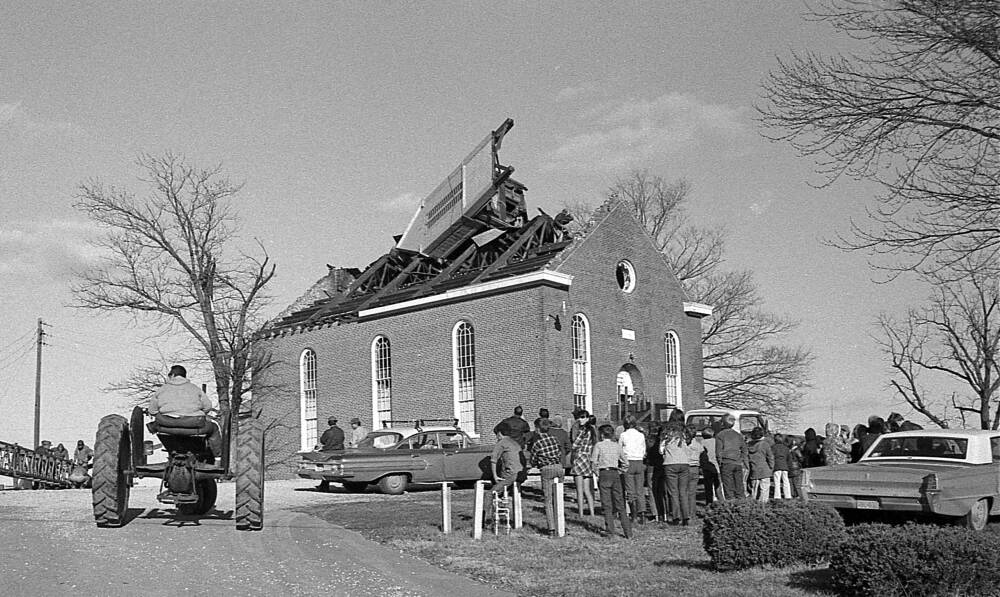 Members of the congregation view storm damage Wednesday to the 96-year-old Grace Lutheran Church in Uniontown. Workmen are clearing away the tower, steeple and bells blown onto the roof. (Stephen Robertson ~ Southeast Missourian archive)

Confusion, a state of shock and crowds of curious onlookers hampered clan-up efforts following tornadoes and severe thunderstorms that battered the area early Wednesday leaving one person dead and 24 injured.

Estimates of damages in many areas were not available this morning as insurance adjusters began their job.

In Scott City, hardest hit by the storms, Mayor Cliff Campbell said "things were in too much of a state of confusion and shock Wednesday." Crowds viewing the destruction hampered clean-up efforts, he added.

A 21-year-old Illmo man, Michael Raines, was killed when the tornado destroyed his home on Illmo Route 2. His wife, Sharon, and their son, Paul Steven, 12 months, were listed in fair condition this morning at Saint Francis Hospital here.

Largest damage estimate thus far has been to the 96-year-old Grace Lutheran Church in Uniontown where repairs are estimated at $20,000 and t0 a barn east of Mesler in Stoddard County which the owner says is at least a $10,000 loss.

At Grace Lutheran Church wind toppled the steeple and tower causing extensive damage to the roof. The pastor, the Rev. Erhard Wolf, said one side of the roof was lifted and the steeple, tower and two bells fell directly onto the roof.

The tower and steeple were removed Wednesday afternoon from the roof by Penzel Construction Co. of Jackson. They were placed on the ground to avoid any further damage from debris falling through the ceiling.

Further clearing of debris from the roof was started this morning by Miners Lumber Co. of Perryville in preparation for reroofing. About a dozen company employees and an equal number of church members were at the site.

"My humble estimation is that roughly $20,000 will be necessary to replace the church the way it was," Pastor Erhard said.

The church is one of the four oldest Lutheran churches in Perry County. The present building was constructed in 1875 from clay bricks made at the site. The bells, made in Germany, date back to 1840 when the congregation was organized.

"If everything works well, the roof will be covered by the end of the week, weather permitting," the pastor said. "As far as the steeple and tower are concerned, it will take much longer. The tower may require a different design and additional time."

He said services have been canceled at the church this Sunday, but hopefully will be resumed the Sunday following Christmas. He said it would depend on how work is progressing and if there is a danger of anything falling inside from the roof.

"We are very fortunate and thankful that no life or limb was lost, and that no one was in the building during the storm," he said. "A structure like this can be replaced with a certain amount of sacrifice, but life and limb can't be."

Mr. Wolf has pastored the church since 1964. His home, which is located abut 50 feet from the church, received only minor damage... 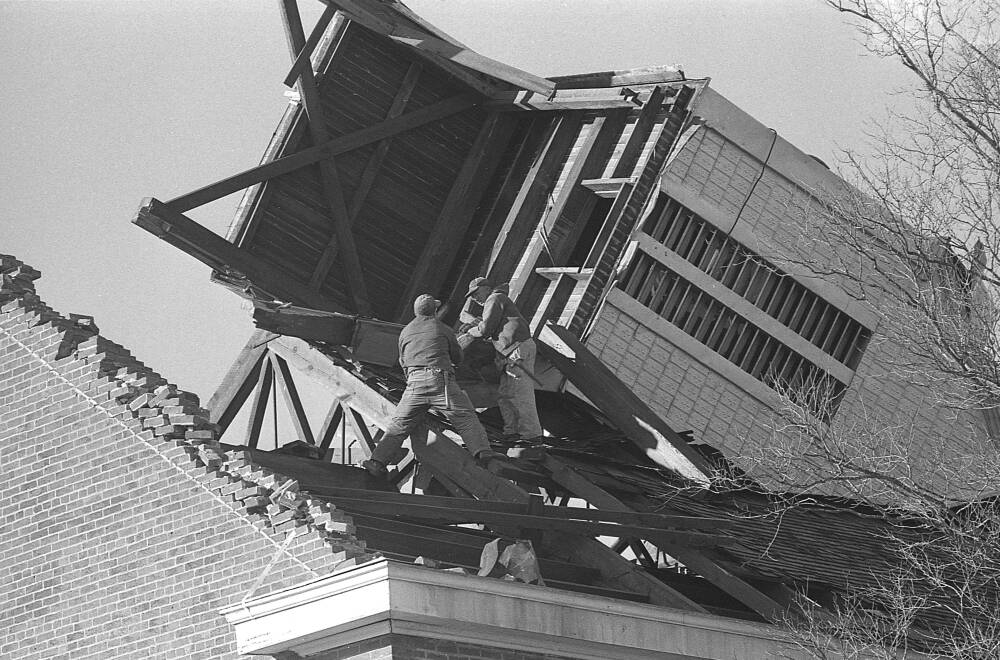 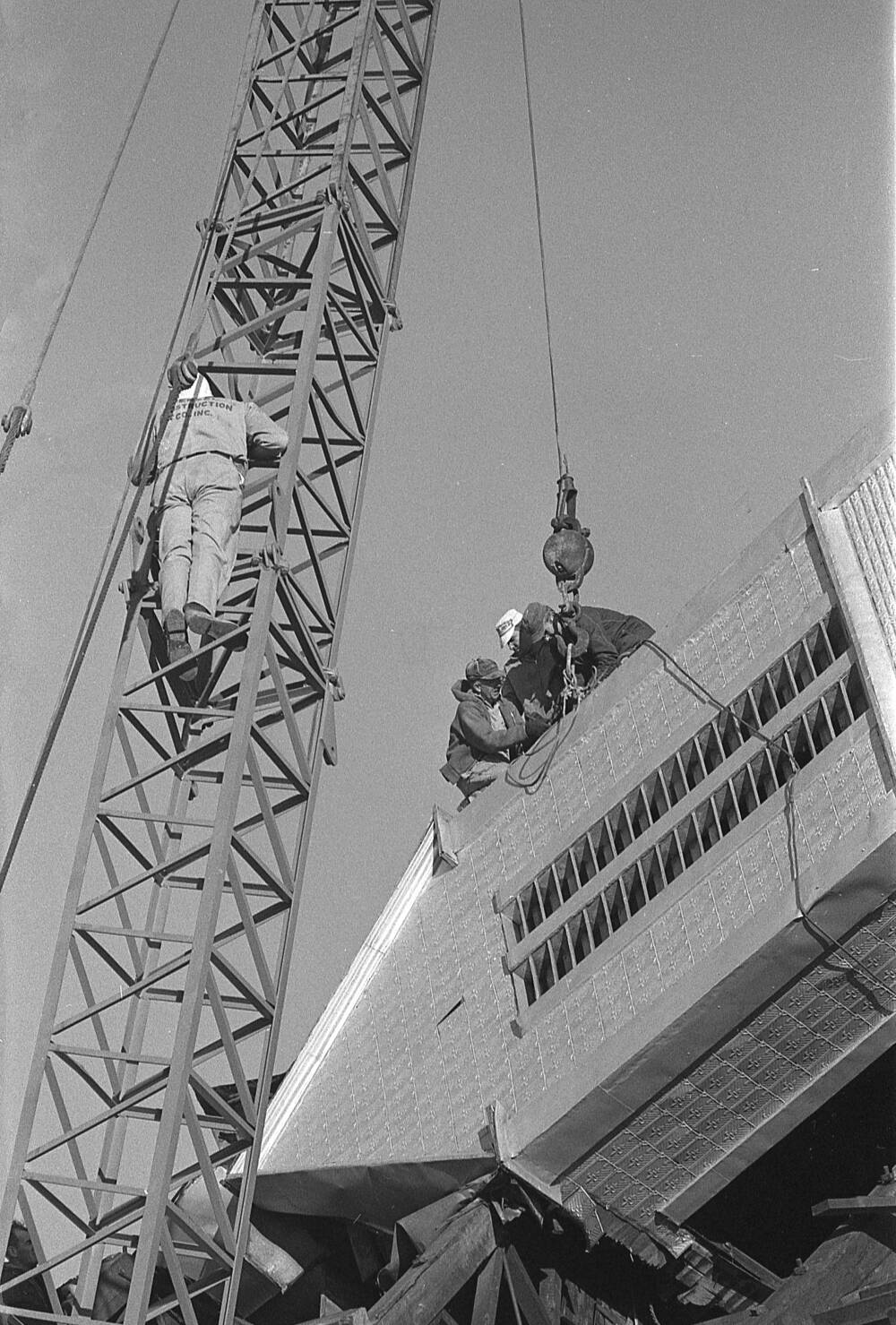 A drama unfolded Wednesday afternoon in Uniontown as workmen from Miners Lumber Co., Perryville, and Penzel Construction Co., Jackson, struggled to remove the steeple of the Grace Lutheran Church, one of the four oldest Lutheran churches in Perry County. The interior was not damaged in the early morning storm, but t was feared the steeple might crash through the ceiling. In top photo, workmen struggle with the wreckage and manage to cradle it with a heavy cable. In next photo, a 25-ton crane is carefully attached. As the men left the building and the crane began to lift the steeple (below), 100 people watched as timbers cracked and groaned. At this point, Gene Penzel, contractor, commented that they had about a 50-50 chance of getting the steeple down safely. Finally, in last photo, the steeple cleared the walls and was lowered to the ground. The crowd gave a sigh of relief. (Stephen Robertson ~ Southeast Missourian archive) 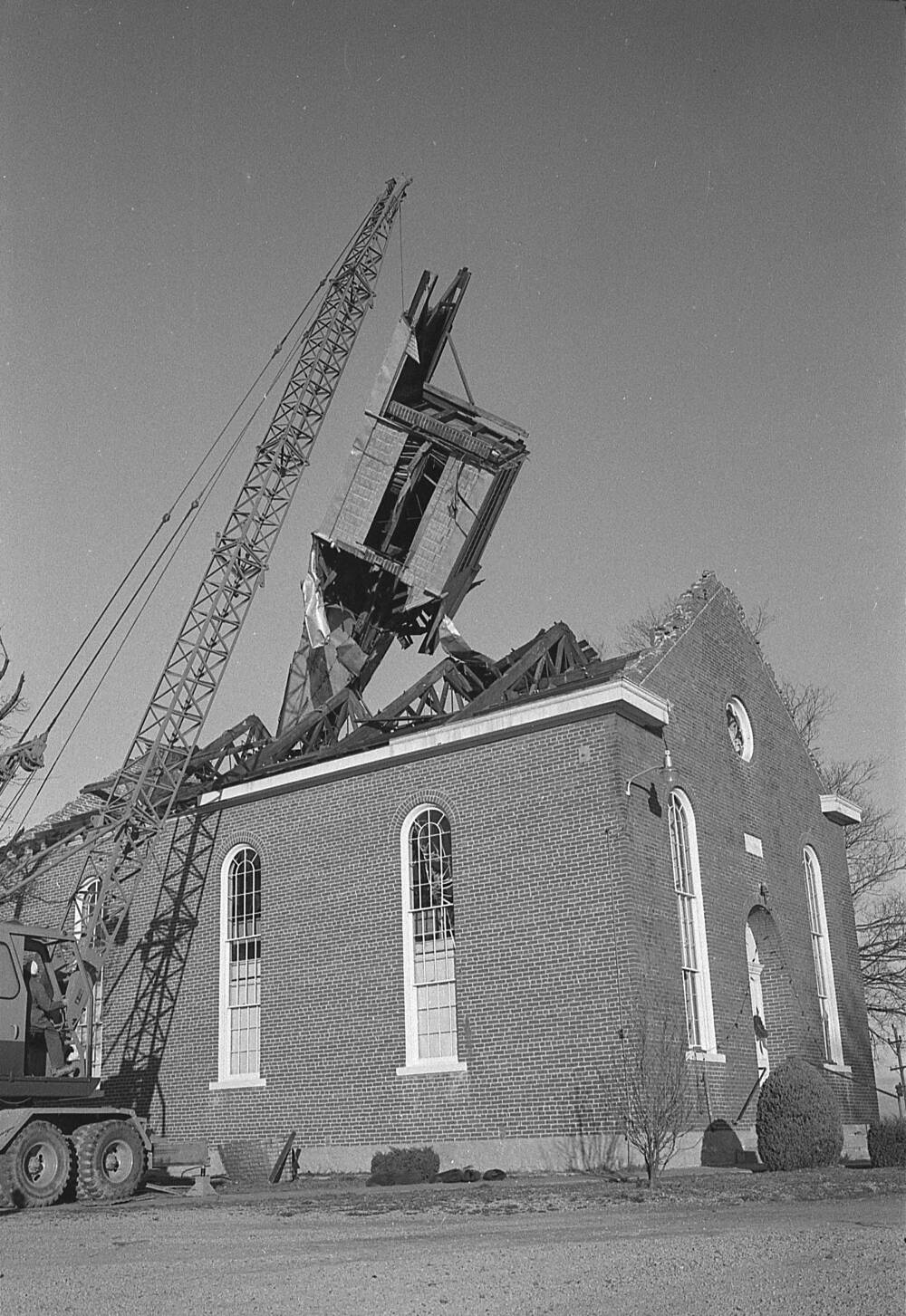 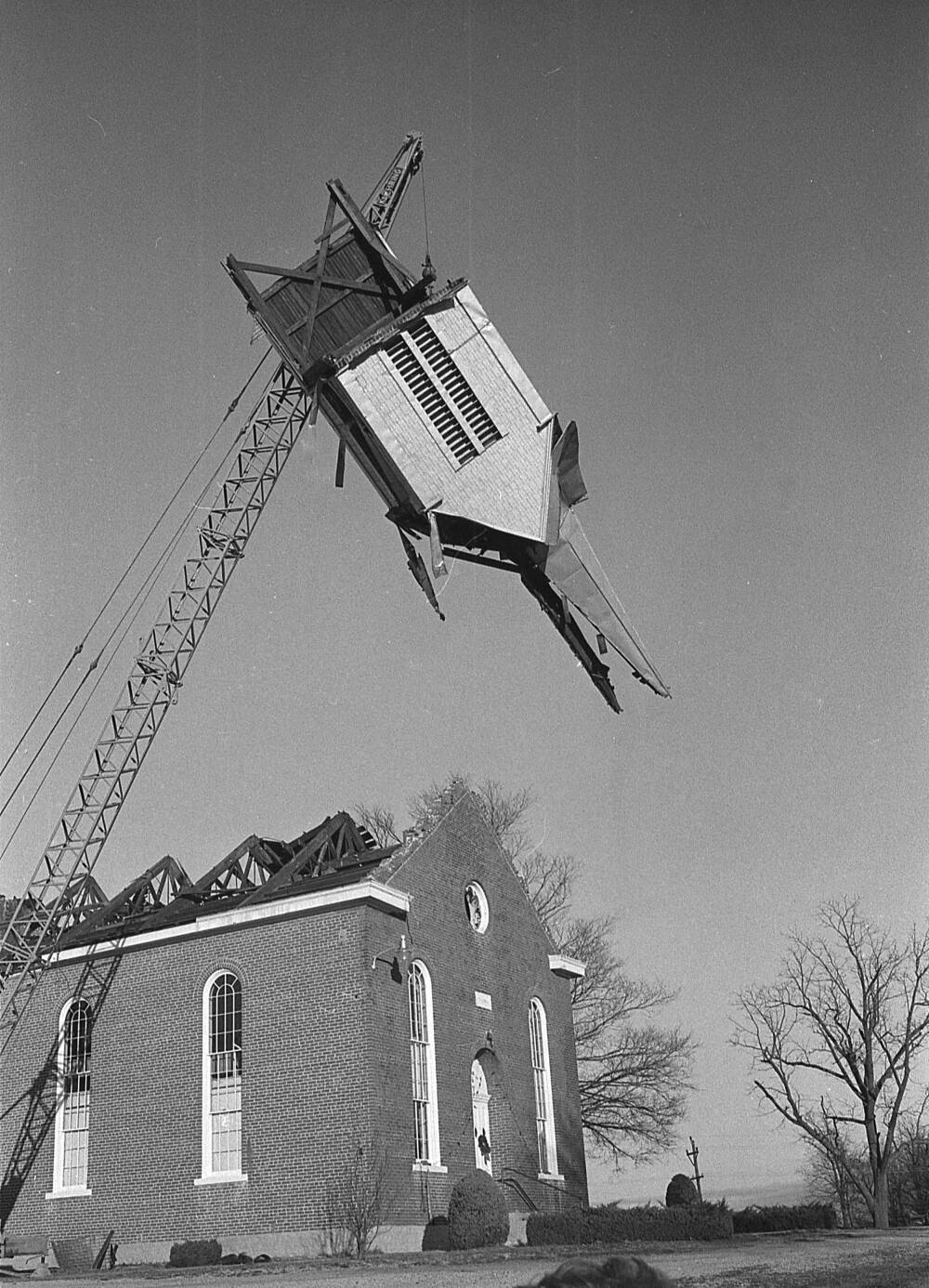 There is little more in the Grace Lutheran file in the Missourian library. However, I did find a story dated April 25, 1975, that noted the congregation was preparing to observe its 135th anniversary of organization. Along with other history of the church, the article says, "The church has required extensive remodeling because of a tornado which struck the building Dec. 15, 1971. It toppled the tower and steeple of the church and ripped off most of the roof. The interior of the old building suffered water damage from the storm.

"Remodeling began to take shape in May of 1972 with the placing of a new Fiberglass steeple atop a bell tower. A special service of thanksgiving and dedication of the spire and cross was held on Pentecost Sunday, May 21, 1972.

"After extensive exterior renovations, members of the church repaired the interior, purchased new pews and remodeled the sanctuary."