In the same edition that contained the article from last week's blog, I found another about a new Cape Girardeau barber who decided to buck the Barbers Union.

Eugene Penny opened a shop on North Sprigg Street, offering haircuts for the rock-bottom price of $1. That soon led to a visit from a union boss and a picket in front of Penny's door. 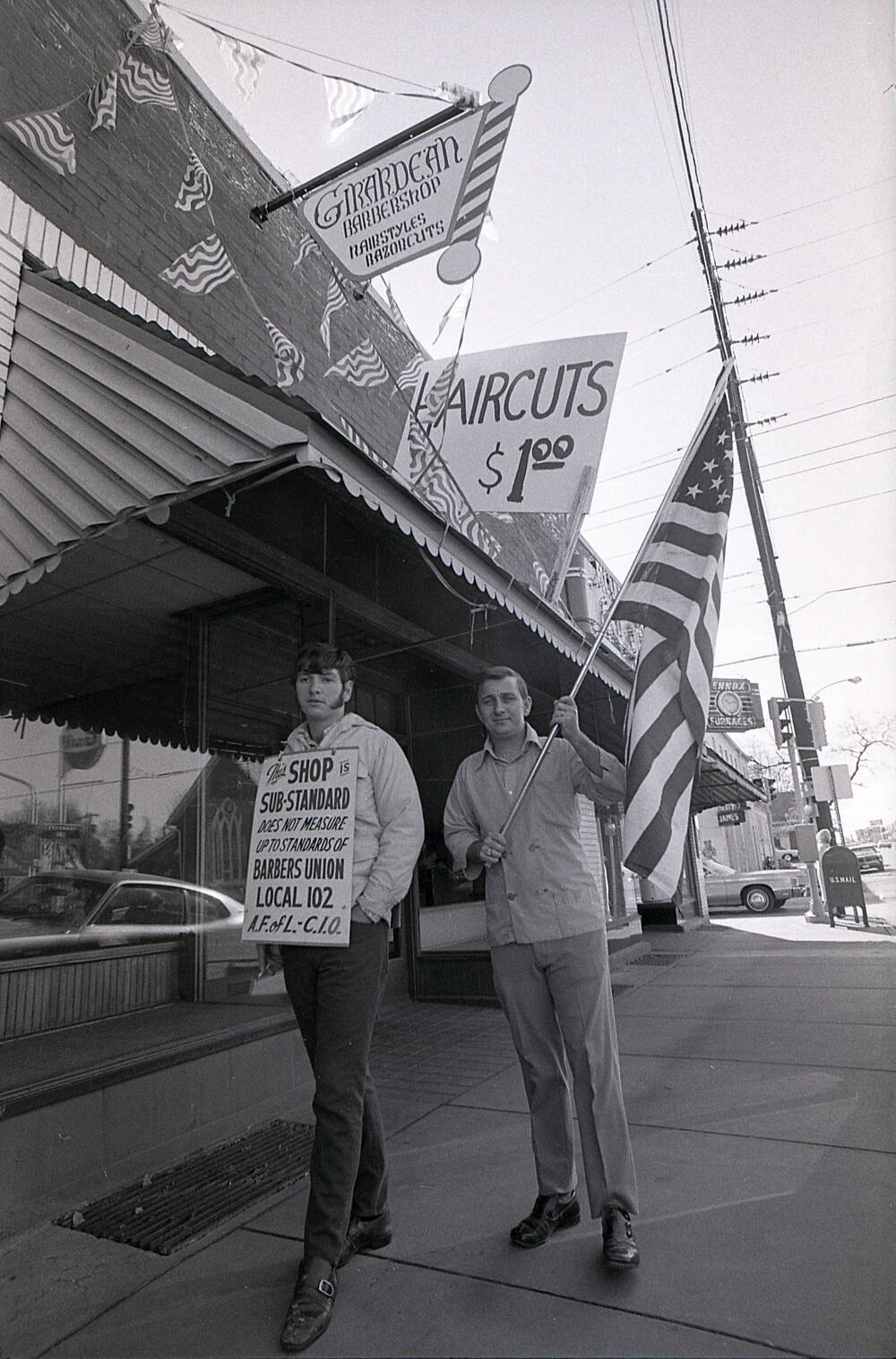 Eugene Penny, who recently opened a $1 barber shop at 8 N. Sprigg St., carries the American Flag as he joins a Barbers Union picket objecting to the shop's nonunion price and hours. The picket identified himself as Don Harper, 1062 Patricia. (Southeast Missourian archive)

Cape Girardeau's newest barber who cuts hair for only $1 is running into trouble with an unhappy Barbers Union.

"I've got the right because this is still America -- it isn't Russia yet," said Eugene Penny as he watched a picket from Local 102 walk back and forth in front of the Penny shop at 8 N. Sprigg St.

"I've had relatives who died on foreign soil to give me this right," he said Friday. Then he grabbed an American Flag and joined the lone picket on the line.

Mr. Penny said he didn't hold bad feelings for the picket, but emphatically defended his right of free enterprise.

"As a small businessman in America I still have the right to run my shop anyway I want," he declared.

Since opening his barber shop several weeks ago, the native Cape Girardean said he has had a number of "grumbles" from the union because he charges the almost unheard-of price of $1 for a haircut and is open for business longer than union shops.

The picket on duty Friday -- Don Harper of 1062 Patricia -- said the union considers the nonunion price and hours unfair and unethical.

The price per haircut in Cape Girardeau's union barber shops is $2.25.

The picket arrived Friday morning after Mr. Penny was visited Thursday by a Barbers Union official from St. Louis.

"The fellow wore a $300 suit, had diamond rings on each hand and a big cigar in his mouth," Mr. Penny recalled. "He came in here and told me that I would have to come up to his prices and stay open his hours or he would put a picket in front of my place."

Mr. Penny said he would run his shop "my way."

How can he afford to cut hair so cheaply? "I do a volume business and I don't have a lot of fancy furnishings that aren't necessary. I just cut hair -- and I'm good at it."

He said he doesn't expect too much trouble from the union "because I'm almost across the street from the police station."

Mr. Penny was a barber in Arizona and then operated a shop in St. Louis for about 10 years before returning to Cape Girardeau. "We like it here a lot," he said of his wife and two children.