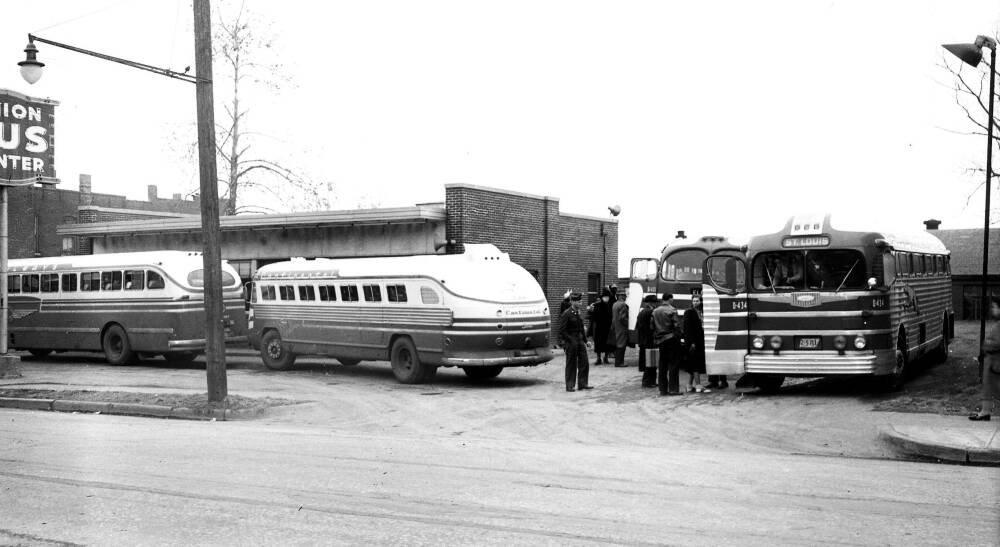 Passengers board a Greyhound bus at the Union Bus Center on South Spanish Street in Cape Girardeau in this undated photograph. (G.D. Fronabarger ~ Southeast Missourian archive)

Last week's blog featured a 1946 article published in the Southeast Missourian outlining the bus service available to Cape Girardeau and the area in the post World War II years. It mentioned there were eight bus lines operating in and out of this city

That made me curious as to where the terminals were for these bus lines. The 1945 City Directory supplies some answers:

Union Bus Depot opened at 16 N. Frederick St. in 1947 and closed its doors in March 1990, the victim of a Greyhound bus strike. Missourian reporter David Hente's article about the closing provides a lot of history on bus operations here.

Published March 22, 1990, in the Southeast Missourian:

BUS STATION A VICTIM OF STRIKE

The Union Bus Depot at 16 N. Frederick St. has become a victim of the 21-day Greyhound bus strike.

The depot, which opened in 1947, closed its doors March 15, said Bob Hemperly, owner of the building. It was the last bus depot in operation in Cape Girardeau.

The closing means Cape Girardeau is without scheduled trans-continental bus service for the first time since the mid 1920s.

Hemperly said the building has been leased to another business that will open there next month. It is uncertain whether Greyhound will open a depot here at another place.

Marge Risha, who had been operating the depot as an independent operator for Greyhound, said she decided to close the depot because loaded Greyhound buses traveling between St. Louis and Memphis no longer were stopping in Cape Girardeau. When the depot closed, Greyhound was operating one bus each way between Memphis and St. Louis.

Great Southern Coaches had operated one scheduled bus through Cape Girardeau on Wednesdays and Thursdays en route to St. Louis and a return trip to Jonesboro, Arkansas.

Still operating into Cape Girardeau is an Ozark Limousine shuttle van from Farmington.

Shuttle owner Eddy Shumake said Wednesday the shuttle will continue to arrive and depart from the former Union Bus Depot. "I have been given permission for our vans to load and unload in front of the old bus depot until next month," said Shumake.

The van from Farmington arrives in Cape Girardeau daily at 9:50 a.m. and departs here for St. Louis via Perryville and Farmington at 12:05 p.m. The shuttle arrives at the St. Louis Greyhound Bus station on Delmar Street at 3:35 p.m

If there are passengers, Ozark operates a van that departs the St. Louis bus station at 3:34 p.m. for Cape Girardeau, and stops at Festus and Perryville. It arrives here at 6:15 p.m. daily.

As a result of the Greyhound strike, Shumake said he has had to add extra shuttles on Fridays to transport homeward-bound Southeast Missouri State University students. The students used to ride the afternoon Greyhound bus from here to St. Louis.

Shumake is also operating a shuttle service from Farmington to Poplar Bluff, which returns northbound to St. Louis with a stop in Farmington,

"We also provide on-call service to Sikeston," he said.

Shumake said he has been able to take over some of the freight service provided by Greyhound, but there are size limitations.

The first bus lines to operate out of the depot were the Hemperly-owned St. Louis-Cape Bus Line and Great Southern Coaches of Jonesboro.

Hemperly, who still owns and operates a charter bus service in Cape Girardeau, said during World War II all f the major interstate bus lines operated from bus depots in the 600 and 700 blocks of Broadway. Following the war, the depots were relocated to relieve traffic congestion on Broadway.

Greyhound and Continental Trailways moved to a depot in the first block of South Spanish. That building is now a restaurant.

The Hemperlys moved their St. Louis-Cape Bus Line offices to the depot on South Frederick.

Hemperly said in 1960 Greyhound moved its depot to the former Alvarado building at Broadway and North Kingshighway and Trailways moved (to) the South Frederick building.

In 1973, Hemperly sold his bus line to a St. Louis firm that operated it four years.

By 1979, only Trailways and Greyhound were operating from the Union Bus Depot.

Hemperly said in the 1960s there were at least 28 buses arriving and departing every 24 hours from the North Frederick depot.

"St. Louis-Cape had five round trips, Greyhound had six, and Trailways had four per day," he recalled. "It was really a bustling place."

Hemperly said on weekends and holidays he frequently ran as many as eight relief buses on a single schedule because of the passenger loads.

It was not uncommon to see Greyhound operate a relief bus behind its regularly scheduled buses in and out of Cape Girardeau because of many passengers.

Hemperly said the completion of Interstate 55 was the "handwriting on the wall" for St. Louis-Cape bus line, and to some extent, the other major bus companies.

"The interstate really made a difference," he said. "So did deregulation."

Until the strike began on March 2, Greyhound had been operating three round-trip schedules through Cape Girardeau each day.

Hemperly said he regrets the demise of bus service to Cape Girardeau. "It's the end of an era," he said.

Hemperly said he is not sure whether Greyhound will return to Cape Girardeau after the strike.

"Bus service today is no what it was like when I operated St. Louis-Cape," he said. "We emphasized service to our customers and riders. Today, it seems the only thing they are interested in is making a fast buck."

A spokesman for the Greyhound depot in Sikeston said the depot there is still open with buses arriving each day from St. Louis and Chicago, and returning...