Last week's blog focused on a 1914 "Baby Show" held in Cape Girardeau to place orphans from the Missouri Home Finding Society in St. Louis with local families. From the articles published at the time, the show was a great success.

Another scheme to find homes for the homeless children of big cities in the East was the orphan train. Southeast Missourian reporter Sam Blackwell wrote about this home-finding effort in 1996.

Published June 2, 1996, in the Southeast Missourian: 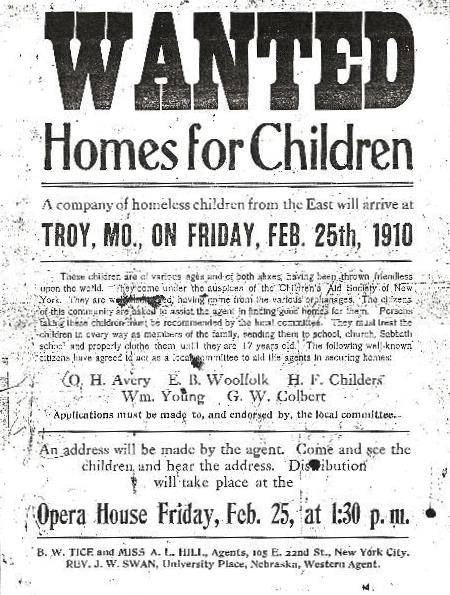 From 1854 until 1929, an estimated 150,000 orphaned and half-orphaned children were shipped by train from Eastern metropolises to farm communities in the Midwest. Some 6,000 of the so-called Orphan Train Riders wound up in Missouri, where they were taken in by childless families or those just looking for help on the farm.

Many of the now-few surviving riders describe traumatic separations from brothers and sisters and scenes in which they were lined up like cattle to be picked or rejected by the local citizenry. But generally their lives seem to have been improved by moving away from New York's horrors.

The arrival of orphan trains was a big event in small Midwestern communities. The townsfolk turned out at a church or meeting hall where the boys' muscles and the girls' looks were evaluated before the selections were made. In some cases, the children were simply adopted and became part of the family. In others they because informally indentured servants.

Not much effort was made to keep brothers and sisters together, although sometimes they were placed in neighboring communities.

There, two brothers named Pollock each took one of them. "He was raised as a son," Syler said of his grandfather, but was allowed to keep the Syler family name.

Syler was not yet born when his grandfather died, and said the story of how he came to Missouri "wasn't a big thing" in the family.

But he has collected orphan-train articles that appeared in the New York Times and Smithsonian Magazine, and videotaped an A&E documentary about the trains.

The last provided him with "one of those spooky moments" when it displayed a photograph of a group of boys. "The camera panned right to left and when it hit one particular kid it reminded me of pictures I'd seen of my grandfather," he said.

His grandfather eventually married a local doctor's daughter. Syler himself grew up in St. Louis and came to Cape Girardeau to attend Southeast Missouri State University.

For many years, the Sylers attended Pollock family reunions, held in alternate years in Norman, Oklahoma, and Columbia, Missouri, on the occasion of the Oklahoma-Missouri football game.

A reunion of Missouri's surviving orphan-train riders, friends and descendants (was held in June 1996) in Trenton, located in the north central region of the state... (Organizer was) Evelyn Trickel...

Trickel helped organize the first reunion of Missouri orphan-train riders in 1985. She said many descendants are trying to trace their family origins, which can be difficult. "Sometimes names have been changed, sometimes records have been destroyed," she said.

Mary Ellen Johnson, an Arkansas woman who founded the Orphan Train Heritage Society of America Inc., has set up a database tracking more than 4,000 of the orphan-train riders. She has no record of an orphan train coming to Southeast Missouri. Two brothers, Fred and Ray Shoas, did arrive in Farmington in 1911.

She said many siblings who were separated were never reunited. For some, being an orphan carried a stigma -- some were shunned and called bastards -- that learning about the orphan trains has helped erase.

One woman told Johnson she'd always felt bad about being an orphan until she learned about the orphan trains and realized her experience made her special.

Johnson's organization hosts national reunions for orphan train riders every October in Arkansas. Usually about 150 people come, most of them descendants.

The second story she received was about a girl who came on an orphan train with her two brothers. "Later on they got separated, and she told about the trauma of her holding onto her brother's leg," Johnson said.

"...Only an orphan train rider knows what it felt like."

To begin her own research, she interviewed four of the riders. "They were the most wonderful people I believe I'd ever met," she said. "They had a great spirit that they could overcome anything..."

Published June 2, 1996, in the Southeast Missourian:

TRAINS AN ANSWER TO SOCIAL PROBLEM

New York was awash with immigrants from Europe during the last half of the 19th century. They came at the rate of 1,000 per day, many large families from Ireland and Germany with promises of free land in their ears. Those who had money could pursue their dreams, those who had none remained in a city where typhus, tuberculosis, yellow fever and other diseases killed and jobs were scarce.

Whole families died in some cases, but those left behind often had no means of making a living. Sometimes children were put in orphanages by fathers who went to sea and never could reclaim them. Sometimes mothers gave up their children rather than watch them starve.

At a time when the city's population was 500,000, an estimated 10,000 boys and girls were living on New York's increasingly mean streets. Gangs were rampant and 12-year-old prostitutes common. In the city's foundling hospital, 9 of 10 infants died.

The Rev. Charles Loring Brace was a 25-year-old Methodist minister who envisioned that America's vast midland could provide an answer to the city's problems. And Brace believed that a family environment, even one so far from the only home they knew, would be better for children than growing up in institutions or in slums.

He organized the Children's Aid Society and in the first year began finding homes for orphans in New England. Success there was followed in 1854 by the first of the orphan trains to the Midwest farm belt.

The Orphan Train Movement was criticized by some at the time as a social experiment that was no better than indentured servitude. Some in the Midwest complained that New York City simply was shipping its problems west. But for the most part, the children whose lives were altered by the train ride say it was for the better.

Two of the orphans eventually became governors, one of North Dakota and the other of Alaska Territory. Another became a Supreme Court justice. Orphan-train rider Henry Jost became mayor of Kansas City.

Their stories have been chronicled in a number of books and magazine articles and a documentary produced by A&E.

The trains ceased in 1929 for a variety of reasons. States were passing laws that helped mothers and children, and the issue of child labor had come to prominence. Thus children became less attractive as laborers.

When they stopped running, the orphan trains were all but forgotten until the aging riders and their descendants began looking for their roots.