In what may have been the first instance of jet planes landing at what is now Cape Girardeau Regional Airport, two P-80 jet-propelled Army aircraft landed at former Harris Field on May 24, 1946.

The field at the time was being used by the government to sell off retired military airplanes. But the P-80s weren't war surplus. Running low on fuel, the pilots landed here just ahead of a rainstorm, and one plane was damaged as a result. While the damaged craft was dismantled and shipped to Scott Field, Illinois, the other jet was flown out, the pilot using U.S. 61 as his runway.

Here are two stories about the incident. My apologizes that the photograph, copied from microfilm, isn't of better quality.

Published Saturday, May 25, 1946, in the Southeast Missourian:

One of the two jet-propelled Army planes which landed at Harris Field late Friday in advance of a storm was damaged when the fast-moving ship left the runway and rolled 150 feet over the soft earth of the field. Landing gear pierced one wing, but the pilot escaped injury. The other plane also rolled off the end of the runway, but was not damaged.

It was reported the planes would be dismantled by an Army crew and would not attempt a takeoff at the field.

Published Tuesday May 28, 1946, in the Southeast Missourian: 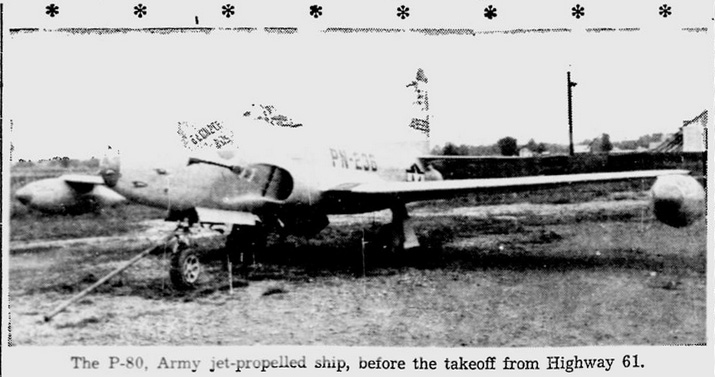 Hundreds of spectators got one of those aerial super-thrills at 10:37 a.m. today when Lt. H.E. King of March Field, California, took off (in) his P-80 jet-propelled fighter plane, the fastest thing on wings, from Highway 61 along Harris Field. The plane landed here last Friday afternoon along with a similar ship, piloted by Maj. M.L. Sears, also of March Field. The latter ship was damaged when it ran off a Harris Field runway.

Long before the ship was scheduled to take off a large crowd had gathered at the field, taking up all of the parking space and the highway either side the barricaded points was jammed with traffic.

The field's police barricaded the pavement to halt traffic between the north end of the airport and Ancell. The plane had been previously gone over by a special crew from the Army air field at Oklahoma City, which came here in a huge C-47 transport ship Saturday to change the ship's tires and give it a final check. There were six men in the crew, they, accompanied by Maj. Sears, leaving Monday afternoon.

The plane, which bears the name Blunder Bus viewed by hundreds of persons the past few days, was taken out to the parking area in front of the field entrance Monday afternoon. After being under special guard during the night, the $120,000 fighter was rolled to the highway and to the north end of the barricade just a few minutes before the take-off. Lt. King started the powerful 4,000-horsepower rocket motor, which uses a high type kerosene as fuel. The propeller-less plane sped down the pavement two minutes after the motor was started, was held to the pavement for 4,000 feet, then climbed almost vertically to 10,000 feet.

While observers gaped skyward, the plane nosed over into a dive, Lt. King pulling the ship out over the field and then giving the crowd another thrill as he climbed skyward again, wagging his wings as he streaked toward Scott Field, Illinois, a bare 10 minutes away.

So fast was the fighter traveling that observers said they didn't hear the sound of the big jet motor at a given point until after the plane passed.

Lt. King planned to leave Scott Field this afternoon and three hours later to be in Riverside, California. The other plane is being dismantled by a special crew from Scott Field and it will be taken there for repairs.

The planes here were ones of a group of 29 being taken to various Army air bases for special schools of instruction in their construction and maintenance, and were en route from Oklahoma City to Scott Field when shortage of fuel forced them to land at Harris Field just before a rainstorm last Friday.