From the archive: Kathryn Newman honored

For many years, the Exchange Club of Cape Girardeau annually honored men and women active in community service. Beginning in 1958, the Book of Golden Deeds Award was given to some of the most notable civic leaders in Cape Girardeau's history, starting with Dr. A.H. Rasche. Missourian files list recipients through 1990, including Rush Limbaugh Sr., M. Luther Hahs and, my mentor, Judith Ann Crow.

Following Judy was another woman: Kathryn Newman, who received her award in 1987. 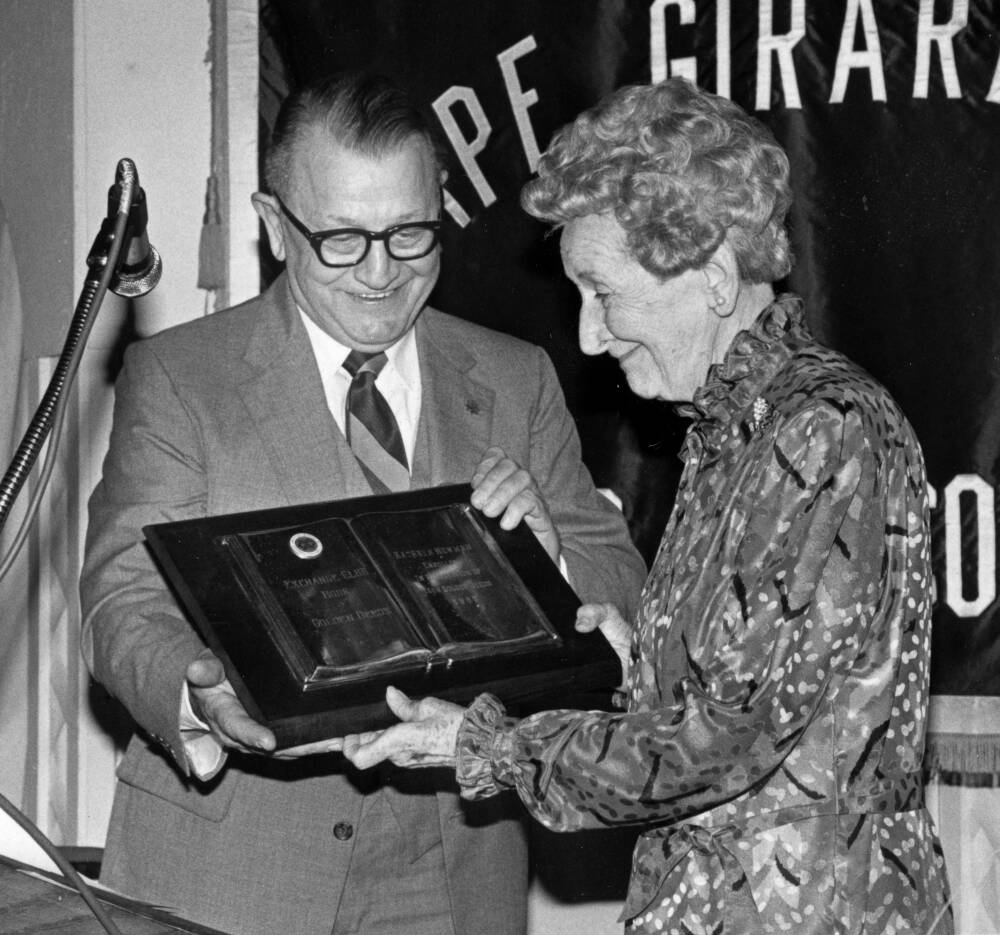 Kathryn Newman was honored Friday night as the recipient of the 1987 Golden Deeds Award. Vernon Auer presents the award from the Exchange Club of Cape Girardeau. It was given at the annual Cape Girardeau Chamber of Commerce banquet. (Mark Sterkel ~ Southeast Missourian archive)

A woman who for almost 50 years has been contributing to and enriching Cape Girardeau was awarded the Exchange Club of Cape Girardeau's Golden Deeds Award at the annual Chamber of Commerce banquet Friday night.

Winner of this year's award was Kathryn Newman, who has been active in community activities since her arrival here in 1928.

"It was certainly a big surprise to me" commented Newman. "There are so many deserving people in Cape Girardeau. I never even considered that I would be eligible for something like this."

Newman is only the third woman to have received the award, which has been presented by the Exchange Club of Cape Girardeau since 1958. "I guess that just shows that the grass is greener for women here now than it was in 1928, when I first came to Cape Girardeau," laughed Newman.

Newman came to Cape Girardeau at the request of Missouri Utilities. In those days, area residents were just getting used to electricity, and the utility company wanted someone to come to the community to show women how to use the new electric and gas appliances that were beginning to arrive in the area.

Newman was born Sept. 10, 1904, in Des Moines, Iowa. She received her bachelor of science degree in home economics at Iowa State University at Ames.

Before coming to Cape Girardeau, she worked as a dietitian at Lakeland Hospital in Cleveland, Ohio, and at the Lutheran Hospital in Des Moines.

She remembers her excitement in coming to Cape Girardeau.

"I was only gong to get to work with healthy people for a change," she remembered. "As a young woman, I liked the change from working in hospitals."

After arriving in Cape Girardeau, she set up a home demonstration department at Missouri Utilities.

"I had a model kitchen at the utilities building to do once-a-month demonstrations, and we also visited communities all over Southeast Missouri sponsoring schools on use of home appliances and cooking," recalled Newman. She also began writing a newspaper column on that subject for the Southeast Missourian and hosted a half-hour radio show.

She quickly became involved in other community activities, and was instrumental in the formation of the American Association of University Women chapter in Cape Girardeau.

"I got to know a lot of people," said Newman.

She served on the Southeast Missouri Hospital Foundation Board and has been a member of its Million Dollar Club. Newman also helped with the hospital's RN training program in the early 1930s, and helped develop a program for practical nurses at Saint Francis Hospital.

She is a charter member and first recording secretary of the PEO Chapter FY club, and has been a member and officeholder of the Daughters f the American Revolution-Nancy Hunter Chapter, and the Wednesday Club. She served as PTA president in 1947, and was a den mother in local Boy Scouts for five years. She served on the Cape Girardeau School Board from 1951-1962.

Newman served as vice president of the Missouri State School Board Association for several years, and was named an Outstanding Woman in Cape Girardeau in 1951.

Church activities have included serving as president of the Diocesan Board of Episcopal Churchwomen at the Christ Episcopal Church of Cape Girardeau, and being the first woman elected to the Vestry of the church.

She has also served on the United Council of Churchwomen of Cape Girardeau and FISH, where she continues to serve as a telephone volunteer.

"I am just very appreciative of all the opportunities that the Cape Girardeau community has given me," commented Newman.

The Golden Deeds Award is given annually to an individual who has made a lengthy and significant contribution to the community. Nominations and voting for the award is by delegates from various civic clubs in the city.

"Everyone seemed to think she was a wonderful choice. There were many names submitted from the various civic clubs and at least three of them had nominated Mrs. Newman, which I would say is quite an honor for her," concluded Auer.

Kathryn McCarney Newman passed away Dec. 26, 1991, at Carrollton, Texas, where she had been visiting during the Christmas holiday.

She was born Sept. 19, 1904, in Des Moines, Iowa, the daughter of William C. and Frances M. Spaulding McCarney. She married Harry B. Newman in July 1933 in Des Moines.

She was survived by sons, Warren and David Newman, and two grandchildren.

This blog caused several points of confusion as to when the Golden Deeds Award was initiated and when it ended. 1958 appears to be the correct date of the award's inception, but the exact order of the recipients is debatable. But as best as I can piece things together, this is the list of award winners as preserved in the clipping files of the Southeast Missourian.

I find no record of the award being presented after 1990.