From the archive: Jones Refreshment Stand a community gathering spot

As a kid, I remember Mom mentioning a gathering spot on Broadway with peanut shells covering the floor. Jones Refreshment Stand was located in the 700 block of Broadway.

"Joseph L. Jones has purchased the old Fred Harvey News Stand at the old Frisco passenger station (on Water Street) and has moved it to a vacant lot on Broadway, adjoining the Pure Food Grocery, where he is to install a soft drink stand; he will dispense soda waters, ice cream cones, peanuts, popcorn, candies and other things that go with such a stand; Jones was formerly a lineman on the Frisco railroad, but has been unable to do that work for the past two years because of injuries he sustained when he was knocked off a telegraph pole north of here by coming in contact with high tension wires."

Here's a story published Jan. 26, 1987, that gives a bit more history of the Cape Girardeau institution. 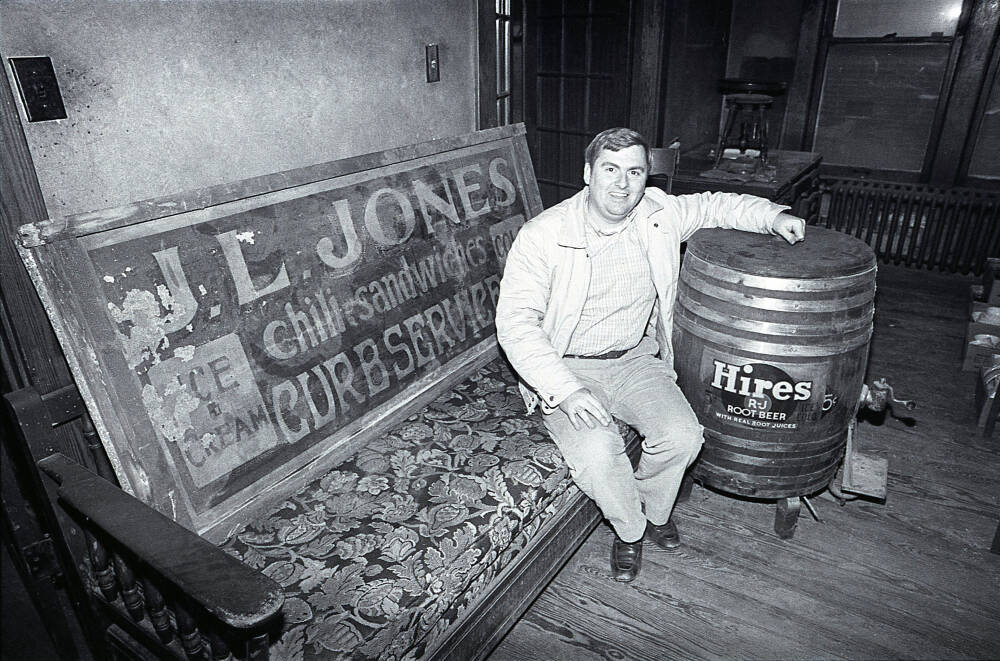 JONES REFRESHMENT STAND: MANY MEMORIES TO GO ON AUCTION BLOCK

More than 50 years ago, Jones' Refreshment Stand, well known for its root beer, roasted peanuts and "Jones' Wonder popcorn," was a meeting place for young and old Cape Girardeau residents.

While the Joneses are now gone, the memory of the root beer stand remains with members of the community who spent hours at the refreshment stand.

The last of the Jones family here, Oda Jones, died Oct. 3, 1986, following a bicycle accident. Jones never owned a car, preferring to travel around town on his bicycle.

An auction will be held Saturday at 32 S. Spanish to sell what is left of the Jones' estate, including many items from the store.

The auction is being coordinated by local antique dealer Harlan Smothers. Smothers said the old peanut roaster, a popcorn machine and several Hires Root Beer barrels from the store are among the items to be auctioned.

"A lot of people my age will remember," he said. "Mr. Jones, who was crippled, would sit in his wheelchair on the sidewalk outside the restaurant."

But older members of the community will remember the Jones' Refreshment Stand as a meeting place for the community.

The building which housed the Jones' establishment was originally Fred Harvey's newspaper stand at the old Frisco Station at the end of Broadway in downtown Cape.

When the station was being razed in 1921, Joe Jones, Oda's father, bought the news stand and moved it to the 7-- block of Broadway just west of the then Hammond's Grocery (now Finney's Drug Store). Jones also built a two-story building at 715 Broadway, just west of the refreshment stand, where the family lived. 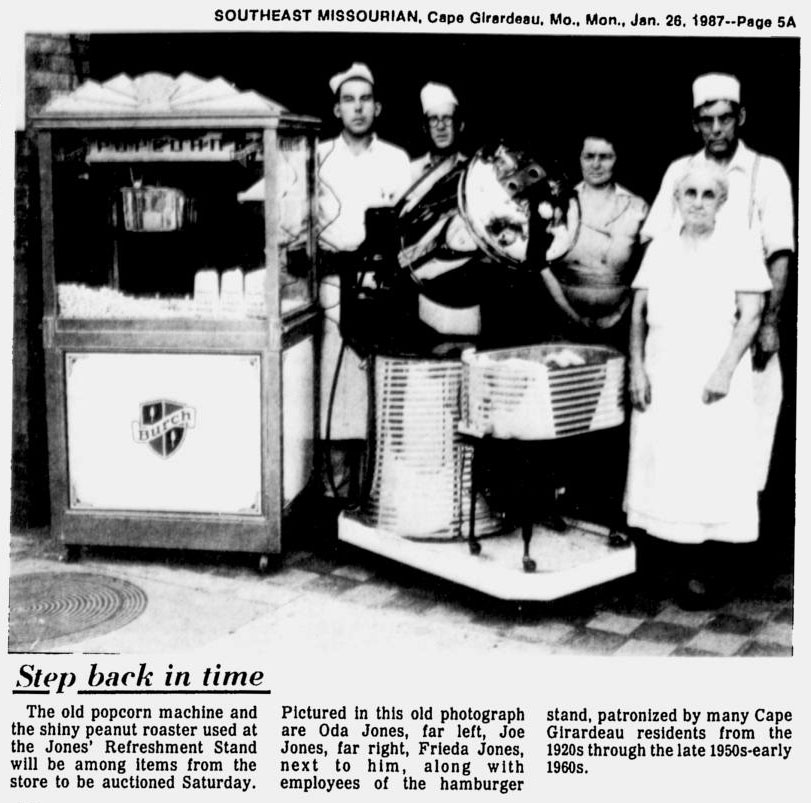 The Jones family -- Joe, Frieda and their son, Oda -- operated the little restaurant each summer selling root beer, popcorn and peanuts along with hamburgers, homemade stew and chili to customers of all ages.

As business improved, Jones enclosed the news stand, adding booths and glass doors across the front of the building.

"I remember my older brother remarking about the accessibility of the business to customers," Vogelsang said. "One could walk in directly from the street. No steps to mount, no definite entrance to make. It was open across the front during the summer months."

As the weather turned cold, the Joneses packed up and headed to Florida for the winter.

The Jones' Refreshment Stand was the only establishment which closed each winter marking the end of the summer socializing season.

While Jones' Restaurant was well known for hamburgers, chili and fresh roasted peanuts, it was Jones' Wonder Popcorn that made the establishment unique.

"Mr. Jones would stand out there and sell popcorn to anybody that would come by," said Dorothy Pott Goodwin, a local resident, who recalls the stand.

Goodwin said she walked along the 700 block of Broadway past the refreshment stand often while growing up, but her fondest memories are those of dates at Jones'.

"It wasn't what you would call a hangout," she said. "But everybody went there after the show to get a hamburger."

She and her husband, Van Goodwin, stopped there many times during the five years they dated.

"We'd go to the show, to the Broadway, and that was within walking distance. It was a good place to get a hamburger."

But she said part of the attraction of the restaurant was that many people went there.

"It was a congregating place for the town's people," Goodwin said. "It was just like Wimpy's was later."

Jones' place is gone, and local residents have found other places to congregate, but the memories of hours spent at the little restaurant still live.

"I guess it's just kind of a thing from the past," Goodwin said.