From the archive: The men in the old photo...

Old photographs fascinate me, especially if they are from the local area. It's always a bit disappointing, however, to find such a photo but not know who the people pictured are.

That's not the case with the photo I'm using with this blog. Every face is identified, and all were prominent men of the area in the late 1800s and early 1900s.

I used this photo last year, when I blogged about the burning of the railroad bonds in 1919. I thought at the time, it would be neat to go back and do a blog giving the bios of each of the men in the picture. But it seems someone in 1920 had the same idea. 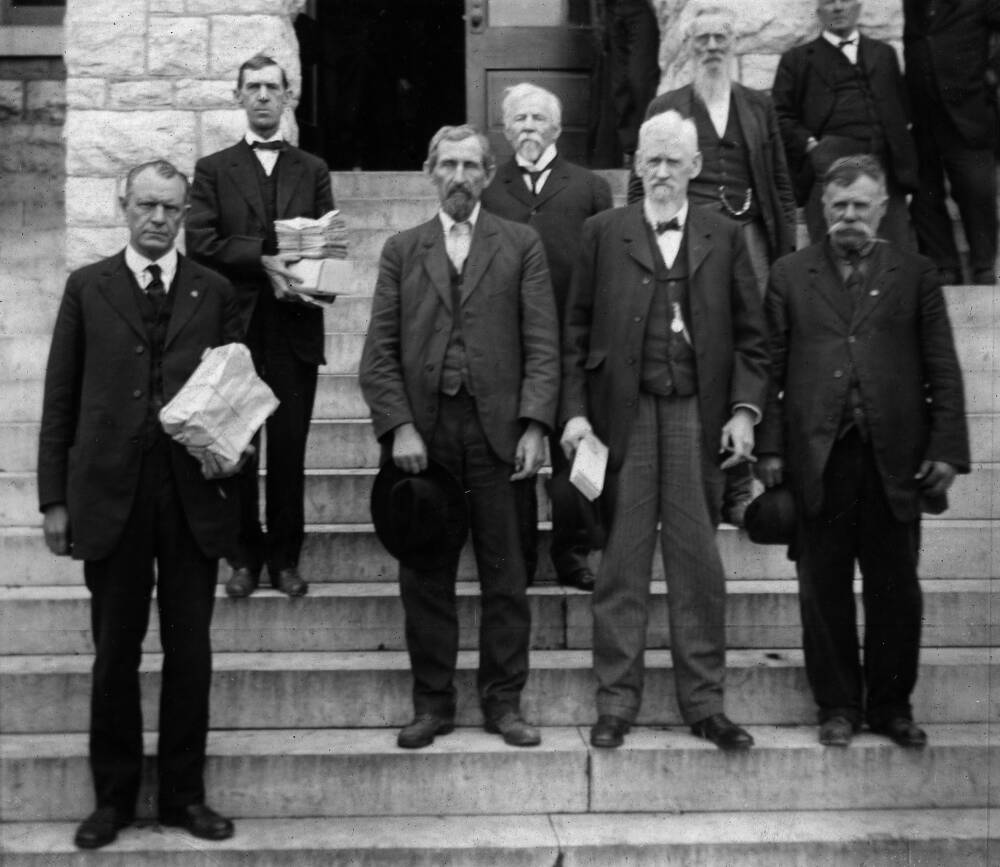 A RARE PHOTOGRAPH, TAKEN ON A MEMORABLE DAY -- AND THE MEN WHO APPEAR IN IT

Accompanying this article is a picture that is unusual in many ways. It was taken on the day when the county court officially destroyed the Cape Township railroad bonds (May 4, 1919), after the last one of them had been paid off.. These bonds had been a burden on the city and township of Cape Girardeau for a generation, and had hindered the growth of the city for years

Judge (William) Paar, who departed this life on last Sunday night (Dec. 26, 1920), and who was presiding judge of the county court when the bonds were destroyed, was one of the most prominent figures in public life in this county, having served as city assessor and city clerk in Cape Girardeau during the time when conditions were somewhat chaotic and establishing order in the system of taxation in that city. Later, being elected to the office of county clerk, which office he held with distinction for 16 years, and then again being called to public service as judge, he had been identified with the with the affairs of the county, and knew the history of the financial transactions as no other man could know them. Endowed with a wonderful memory, which was his even in advanced years, he could recall dates and events with marvelous ease and without apparent effort. In fact, it was he on whom many relied when certain dates were in dispute.

Judge Paar was known as the "walking encyclopedia" to all who knew him. On the bench of the county court he was a man of rare good judgment, always progressive and favoring every forward movement, if the finances of the county warranted and could afford the expenditure, and at the same time conservative and careful in all transactions concerning the county's finances. Never did he become authoritative or arbitrary, and even the humblest could find in him a willing auditor; in fact, it was the humblest class which enjoyed his advice and protection most. Many who looked upon him as their adviser in legal and financial matters, and to whom his advice was given freely and without cost, will feel their loss keenly.

Among the public figures in Cape Girardeau County is Col. L.M. Bean, also shown in the group above. Seventy-seven years ago he was born in this county, and while a young man took up teaching as a profession. At the outbreak of the Civil War he enlisted in Company G, 39th Missouri Militia, and was later commissioned as lieutenant colonel to organize the 40th Regiment, but the war had ceased before that could be accomplished. Since that time Col. Bean has been in public life continually, serving as deputy coroner, deputy sheriff (under Carroll, Seibert and Kage), deputy surveyor under Wash Snider four years, county assessor four years and county surveyor 12 years. In land matters he has long been considered an authority, and he is perfectly at home in the land records of the county, many of which he helped make.

The accompanying picture shows Hon. Louis Houck for the first time in any newspaper, so far as The Missourian knows. Mr. Houck engineered the refunding of the railroad bonds and therefore took part in burning them.

The other four men four men in the group are not so old in public service, but are nevertheless widely and favorably known to most of the citizens in the county and beyond. County Clerk Blucher Sperling served as deputy circuit clerk and ex-officio recorder under Christ Betten for several years, later was deputy collector of internal revenue and in that capacity traveled extensively in Southeast Missouri and made an enviable record. Six years ago he was elected clerk of the county court, and reelected two years ago for a second term. He also served as city official in several capacities and is now alderman from the Third Ward. He also is one of the directors of the Jackson Exchange Bank.

Judges P.C. Kasten and G. Jacob Keller each have served as county judges from the first and second districts respectively for four years. Judge Kasten retires on the 31st day of this month, but Judge Keller was recently re-elected for another term of two years. Both men, during their tenure in office, gave Presiding Judge paar, whom they respected and loved, their unqualified support in all matters pertaining to the welfare of the county and its people. It is said that a more harmonious court had never occupied the county bench than were Judges Paar, Kasten and Keller, and the county was benefited thereby.

Sheriff (N.J. "Jeff") Hutson, whose term expires at the end of the present year, has made a reputation as executive officer such as many men would be proud to possess. Not only was he popular enough to overcome a majority of about 600 votes against him, but was elected, the only Democrat in the county, to the responsible position with a handsome majority in his favor. Before making the race for the office of sheriff, he had been instrumental, as police officer, in taming a part of the city of Cape Girardeau, which had acquired a somewhat undesirable reputation. His record as patrolman earned him the position of chief of police of the city of Cape Girardeau, and it is agreed that he had made one of the best chiefs the city has ever had. had he not been barred by the statutes from succeeding himself, he might have been re-elected to the office of sheriff.

The picture that inspired this article is one that deserves a prominent place in the historical archives of Cape Girardeau. It is doubtful if any other photograph ever taken in this county showed a group of stalwart citizens who served their community better and who were held in higher esteem.

Judge William Paar was born Dec. 28, 1848, on a farm near Cape Girardeau, the son of German immigrant Andrew Paar. He died of pneumonia Dec. 26, 1920, having been ill only a few days. Burial was Dec. 29 at the Jackson City Cemetery.

He was survived by his wife; three sons, William Paar of St. Louis, Adolph and Frank Paar of Jackson, and a daughter, Emilie Paar of Jackson; a sister, Rachel Schlindwein of Cape Girardeau, and a brother, Adolph Paar of Cabot, Pennsylvania.

Col. Lewis Martin Bean was born Sept. 20, 1843, on his father's farm 1 1/2 miles west of Gordonville, the son of Robert and Mary McFarland Bean. He died Aug. 14, 1933, his death "attributed to a fractured right hip, sustained in a fall at his home on First North Street in Jackson," according to his obituary published in the Southeast Missourian the day of his death. He was buried at Jackson City Cemetery Aug. 16, 1920.

He was first married to Elizabeth Miller of Cape Girardeau, and their son, Robert Bean of Austin, Texas, survived him. After the death of his first wife, L.M. Bean married Sarah A. Priest, also of this county. Their three children survived him: Mary Bean and W.W. Bean of Cape County, and Capt. Wilson Bean of Wichita Falls, Texas. After the death of Sarah, he married Fannie Marklye of Oregon, who died in 1920. In 1925 he married Mrs. Emma Lewis, and she survived him.

Louis Houck was born April 1, 1840, in Illinois, and died Feb. 17, 1925, in Cape Girardeau, the son of Bartholomew and Houck, both natives of Bavaria. In reviewing his death certificate, his occupation was given as "Affairs." In a way that's an apt description of a man who helped build Southeast Missouri. The hats he wore were varied: railroad builder, attorney, author, historian, Cape Girardeau Teachers College regent.

His life has been examined in a number of previous blogs. Here are a couple:

Houck was survived by his wife, Mary Hunter Giboney; a son, Giboney Houck; a daughter, Rebecca Frissell; and four grandchildren.

He was laid to rest in Old Lorimier Cemetery in Cape Girardeau.

Phillip Charles Kasten was the son of Christian and Mary Schreiner Kasten. He was born March 2, 1862, in Old Appleton and died Dec. 22, 1952, at the family home in Jackson. He married Catherine E. Richter in 1884, and she succumbed in 1939. Kasten was a livestock and grain farmer.

He was survived by four daughters: Rose Kasten of the home, Mrs. Maude Friedrich, Mrs. Ester Borgfield and Mrs. Edna Penzel of Jackson; two sons, Charles P. and George H. Kasten of Old Appleton; a sister and a brother; 11 grandchildren and 10 great-grandchildren.

He was buried at Russell Heights Cemetery in Jackson.

George Jacob Keller was 72 years old, when he died Nov. 11, 1929, "dropping dead from heart disease at 6:30 a.m.... at his home on Koch Avenue in the Koch Suburb," according to his obituary published the day of his death in the Southeast Missourian. Keller, the son of George and Augusta Keller, was born Jan. 27, 1857, west of Cape Girardeau. Like Kasten, he, too, was a farmer.

His wife, the former Minnie Schwab, died in 1921 after they had been married 48 years.

He was buried in Fairmount Cemetery.

Like Louis Houck, Nathaniel Jefferson "Jeff" Hutson has been the subject of a couple of History Page articles:

Cape Girardeau Police Chief Hutson was born near Millersville Nov. 4, 1872, the son of Pinkston Hutson. He died Oct. 7, 1922, shot by Willie Willeford, who had escaped from Sheriff William Browning as he was being taken to prison.

Hutson was survived by his widow, Amanda; and six children: Mrs. Bessie Wilson of Jackson, Jessie Hutson of Bridges, Montana, Mrs. Linus Mouser of Oran, and Nita, Glenn and Lynn Hutson of the home.