From the archive: A school with an identity crisis

For roughly 44 years, the original Franklin Elementary School in Cape Girardeau suffered from an identity crisis.

While the pupils who attended the school and the teachers who taught them knew the name of the facility, no where on the outside of the building was it emblazoned for the rest of the world to see.

Franklin, built at a cost of $175,000 in 1926-28, received its moniker in March 1927, after months of discussion by the school board and suggestions by PTA members. But when the school opened for classes Sept. 6, 1927, the concrete spot above the front doors was blank. It remained that way until 1971, when the pupils, led by the student council, decided it was time to fix the problem. 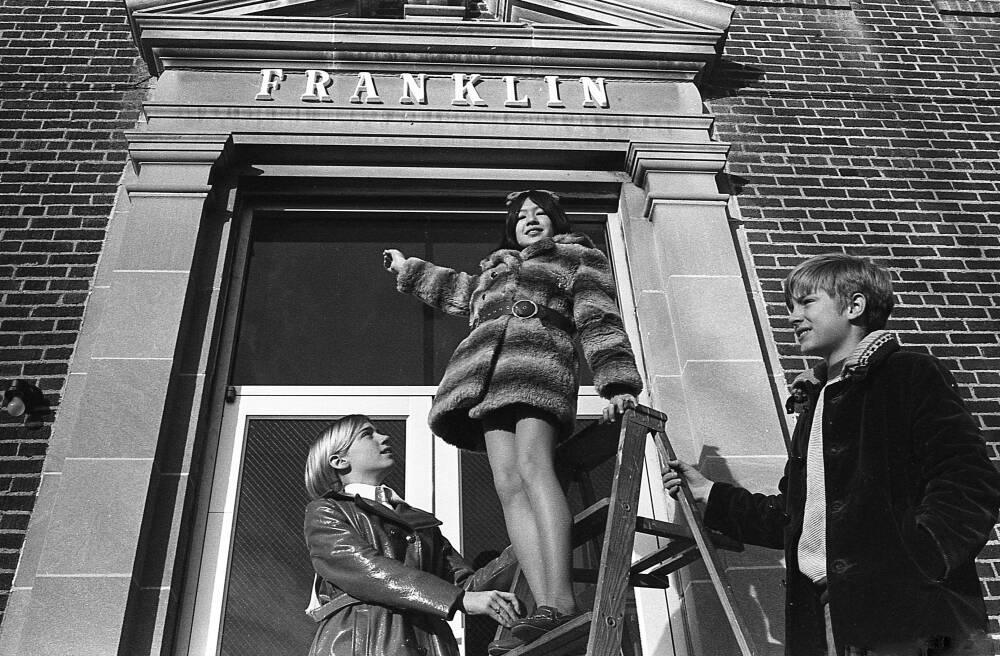 Barbara, president of the student council and daughter of Mr. and Mrs. George Brown, 1735 Oak Lei Drive, admires the new nameplate for Franklin School, while Kirstie, left, daughter of Mr. and Mrs. Ronald LaLumendiere, 1454 Whitener, and Tom, son of Mr. and Mrs. Jim Sawyer, 1431 Rose, steady the ladder. Franklin, previously the only public school with no such outside identification, solved its identity crisis through the efforts of a student council project and the student body. (Southeast Missourian archive)

It took nearly five decades, but at last Franklin school has a "name." In eight-inch high white plastic letters the name FRANKLIN is now emblazoned over the main entrance...and student council members are walking a little taller because they helped put it there.

In 1969 Paul Nunnelly, sixth grade representative, pointed out that Franklin, built in 1926-1928, was the only school in the Cape Girardeau system that did not have its name on the building.

Eagerly, the student council (made up of elected representatives from each of the six grades) took up young Nunnelly's proposal to get a nameplate for the building, and set about making plans for raising the needed money.

(One of the aims of the Franklin Student Council since its establishment 10 years ago has been the betterment of the school plant, along with learning democratic processes.)

Selling school supplies such as pencils, tablets and other necessities of the academic life, a miniature store operated by the pupils themselves provides the main source of student council funds. Other money for the name was obtained by a used book sale on Playday. 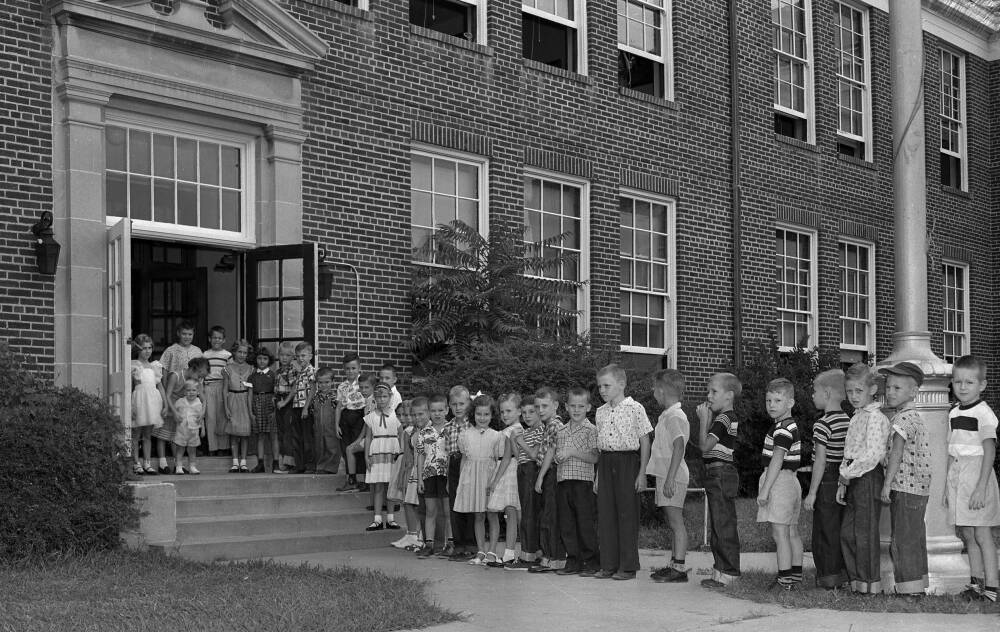 Up until 1971, Franklin School had no nameplate above its doors, as is seen in this photograph taken Sept. 5, 1954, the first day classes were integrated in Cape Girardeau's public schools. (G.D. Fronabarger ~ Southeast Missourian archive)

"I like the sign very much because the letters are large enough to be seen from the street. It will also be very helpful as a directional aid for strangers using our city map and I think it gives us, the pupils, more pride," observes sixth grader Barbara Brown.

Jerry Roloff, fourth grade, comments, "I like the idea of them writing Franklin instead of Franklin School. It looks right above the door."

There was considerable study to be done before the plastic signs were chosen. Sign companies and others were contacted, and the children learned that because of the age of the school, it would be impossible to chisel the name into the concrete above the door, as they had thought they wanted.

Rejecting the idea of a concrete name slab set on the terraces of the school ground, the council decided upon the white plastic letters, to be attached to the concrete. 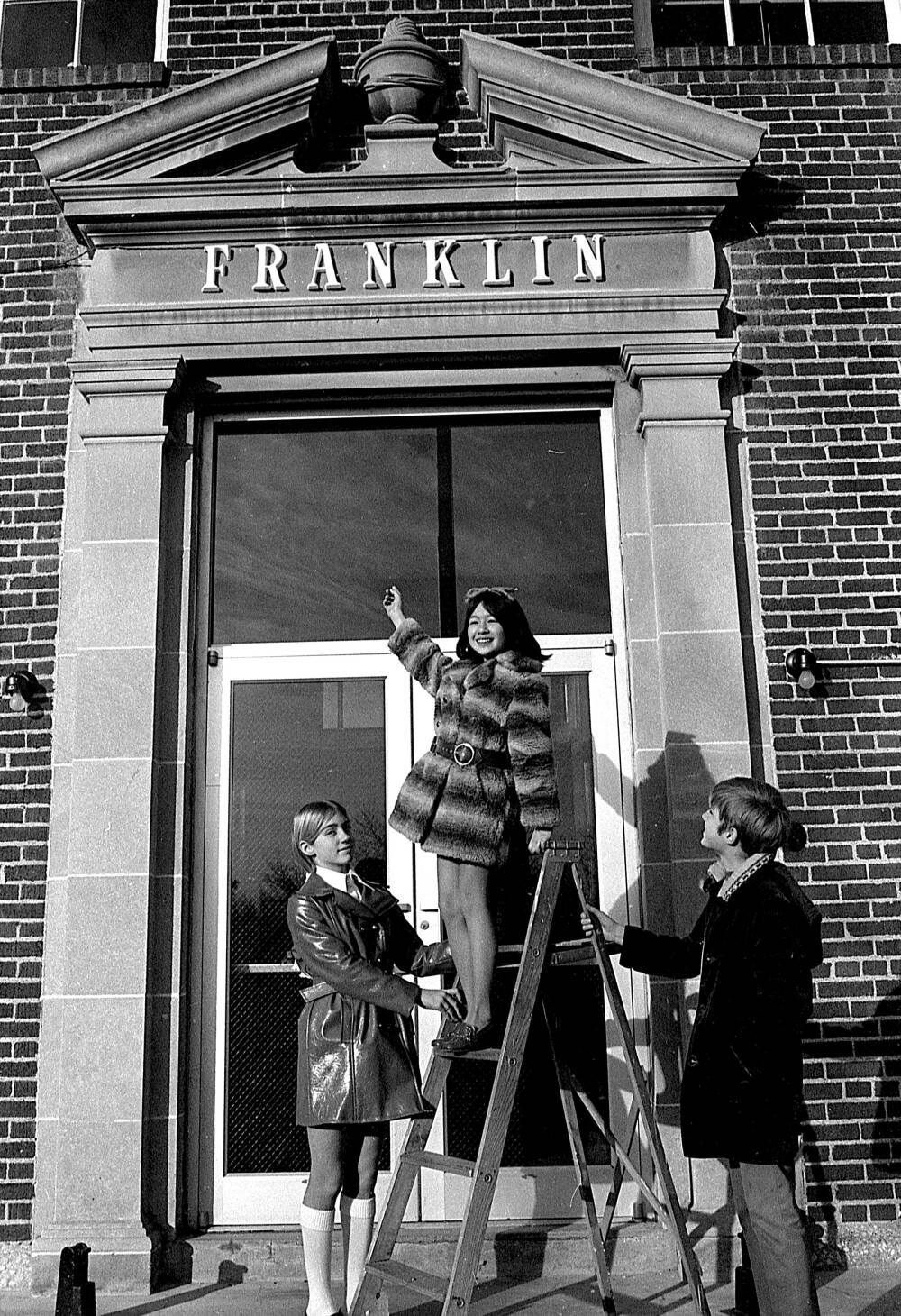 "I like the lettering because nearly everyone knows our school is old and the white lettering above our new door looks like our school is fairly new. Also, when I get older and drive by with MY children I'll be proud to say, 'I voted and was all for that name to be put there,'" says Kirstie LaLumendiere, sixth grade.

Tom Sawyer, sixth grade, adds, "I like the sign because it stands out. Also, I helped work for it."

Naturally, not everyone is pleased. Bart Abernathy says, "I think the background should be painted black." "It's too bright and plain," states Will Mellone. "The white doesn't look good against the concrete," complains Carol Light. "...There should be a plaque with history in front of it," says Jimmy Morrison. All are sixth graders.

But most of the youngsters approve. "It tickles me to think that I was on the student council that put it up," chortles Mark Blaylock, sixth grade. "It's pretty good," admits Mark Shepard, fifth grade. "The letters are spaced perfect," asserts David Grimm, fourth grade.

Kevin Dickmann, sixth grade, adds another dimension: "I like the way the letters are on it. But most of all people will know our student council is working hard."

Another sixth grader, Margaret Hulcy, points out, "I like it because when I'm on patrol duty, people walk by and ask me if this is Franklin School."

Fifth grader Annette LaLumendiere agrees: "Before, people looked at our school and didn't have any idea what the name was. Now they'll know. That's why I like it."

"It shows people like their school," comments Cindy Sander, sixth grade, and classmate Shawn Neal says, "I think it improves the looks of the school."

Stacy Hails, sixth grade, comments, "I like it because it's big and the color is bright enough to tell what it says." Another classmate, Kim Barks, declares, "I think it looks better and it is easier to read than an engraved concrete stone."

And first grader Eileen Kogge has the last work, piping, "It's beautiful."

The original Franklin School was built in the late 1920s in what was then considered the west end of Cape Girardeau. It was demolished in 2012 to make way for a new Franklin School. (Southeast Missourian archive)