What could be more fun than a harvest festival set in the hills of Perry County?

T.J. Ernst explored just that question in the Nov. 10, 1994, article published in the Southeast Missourian. 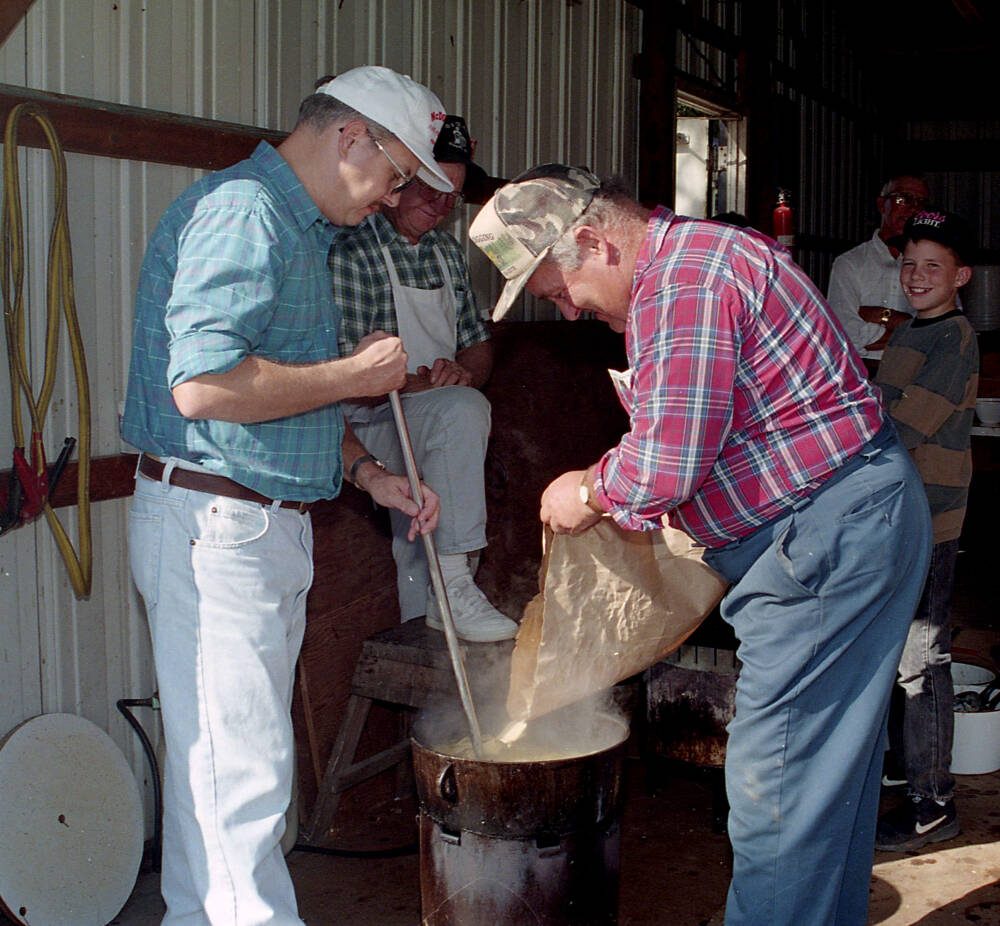 APPLE CREEK -- It was an old-fashioned German meal of hog backbones and sauerkraut, pork sausage, and chicken and dumplings that attracted a record crowd to the annual fall festival here.

Sunday also saw a community working together to raise money for a common cause -- their church and school -- as 950 adults enjoyed the unusual meal on a beautiful fall afternoon.

"Everyone is working together," said Norma Buerck, a member of the fund-raising committee for St. Joseph Catholic Church. Local youngsters 10 and up were among the many helpers.

"The older folks work until they can't anymore," Buerck said. "We'd hurt their feelings if we didn't ask them to help."

The oldest helper was Gertrude Balsman, 89, of Uniontown. She said she still likes to work. "I want to be helpful," Balsman said. "Sitting at home won't get you any points."

She was working beside her daughter, Jean Ann Buerck, helping to fill bowl after bowl of backbones and sauerkraut for the annual dinner, held on the first Sunday in November every year.

The popularity of the fall dinner relates to the food, Norma Buerck said. The turnout grows every year.

"Not everyone cooks backbones and sauerkraut at home anymore," Buerck said. "So they come out and have a chance to enjoy that good-old German food. People don't get backbone cooked like this in a kettle anywhere else."

Some of the parish men started cooking chicken and backbones in an outside shed about 6 a.m. By 10 a.m. the chicken was picked from the bones and ready to add to the dumplings.

The men also cook the dumplings outside in smaller kettles, making about five pounds per batch, which feeds 30 to 35 people. Chicken broth and water is brought to a boil in a kettle after homemade seasonings are added. Bought dumplings are then dumped into the water and cooked about 20 minutes.

Shirley Buchheit was working in the kitchen where the pork sausage patties were being baked and the sauerkraut, corn and green beans cooked.

"Everything's going real fine," Buchheit said. "The good weather has brought out quite a few folks.

"This is one of our more successful dinners," Buchheit said. "This food is what most folks grew up on."

Some of the visitors to the dinner included Vernon Auer of Cape Girardeau, a former police judge and retired lieutenant colonel from the military, and his wife, Charlotte.

Auer said he tries to attend the dinner every year. He has a cabin on nearby Apple Creek at Uniontown and attends church here at least once a month.

"I enjoyed standing in line and visiting with the people I haven't seen in a while," Auer said. "The food was excellent."

He said his wife usually buys some kind of craft item for the Christmas season at the country store. While standing in line for the meal, visitors have to go past several tables with homemade items and other treats, including fresh vegetables, ice cream and beer. 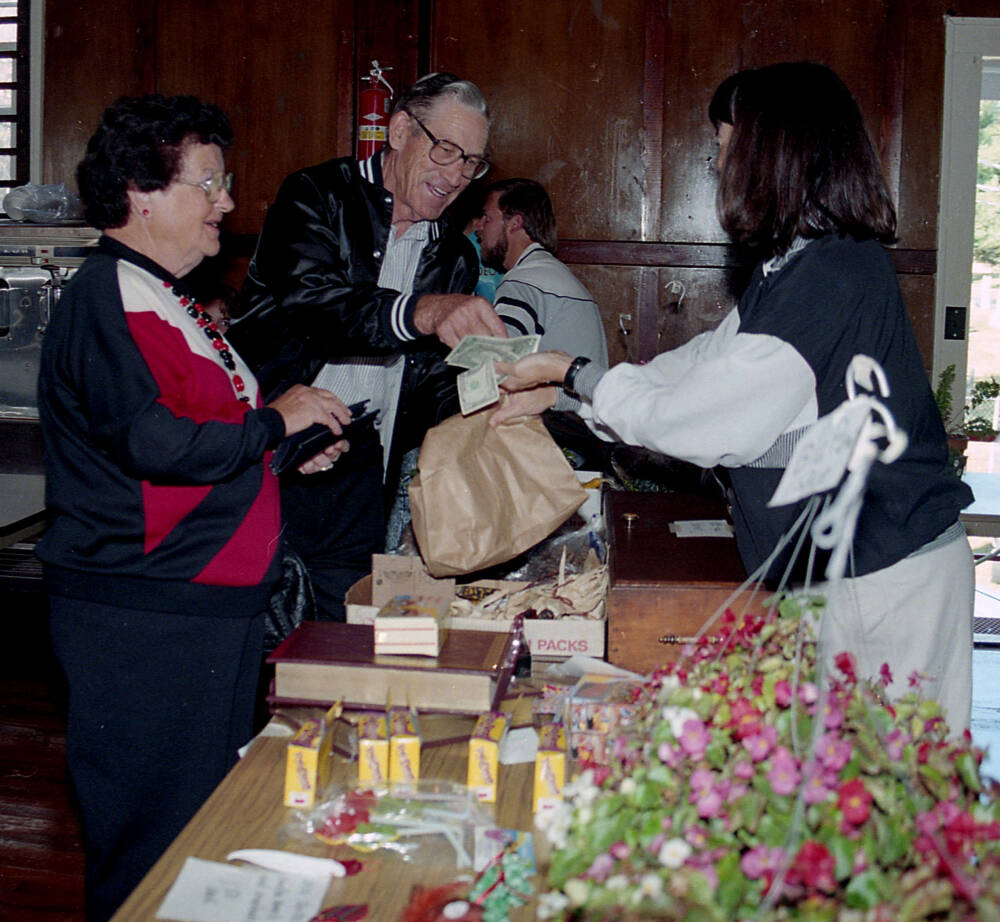 Jill Hoehne, right, helped a Scott City couple with their purchases from the country store at the Apple Creek fall festival Sunday. Elmer and Vera Lohmann said it was their first visit to the event. (T.J. Ernst ~ Southeast Missourian archive)

"This is Perry County, you know," Auer said about the beer stand, drawing a chuckle of understanding from those nearby.

Auer called the grotto near the church "the showplace of the county." He said people come by the busloads to see the beauty of the grotto, which has an outdoor altar, encircling seats and a statue of Mary on a hill above an underground stream that pours from one cave and flows into another.

Accompanying Auer and his wife were Bill and Evelyn English, also of Cape Girardeau. Auer and English play basketball weekly with a group of retired men called the "Golden Boys" at the First Christian Church in Cape Girardeau. Auer usually invites the Golden Boys to his cabin for a weekend every summer, so they also know some people in the community.

Another couple at the dinner were Ben and Luvina Hennemann of Benton. Apple Creek natives, they were married here on Nov. 24, 1936. They were accompanied by their daughters, Jo Ann Schott of Oran and Jeannie Fodge of Benton.

Mr. and Mrs. Hennemann, whose maiden name is Winkler, enjoyed the backbones and sauerkraut at the dinner, but the daughters said they preferred the chicken and dumplings.

Allen Baer, another member of the church's fund-raising committee, was selling dinner tickets. He said they served about 100 more adults this year than last.

"We had lots of folks from St. Louis," Baer said. He said rain on Friday and Saturday, followed by a sunny Sunday, gave everyone a reason to get out.

The visitors who came the longest distance were from Hannibal. The couple bought four extra meals to take home with them.

Theresa Seyer, who made a lot of the homemade sewing goods herself, was busy helping customers find those special items.

After the cleanup had begun, co-chairman Buerck said with relief, "We made it. We had enough food; we're selling leftovers now.

"We had an excellent turnout. It grows every year," she said. 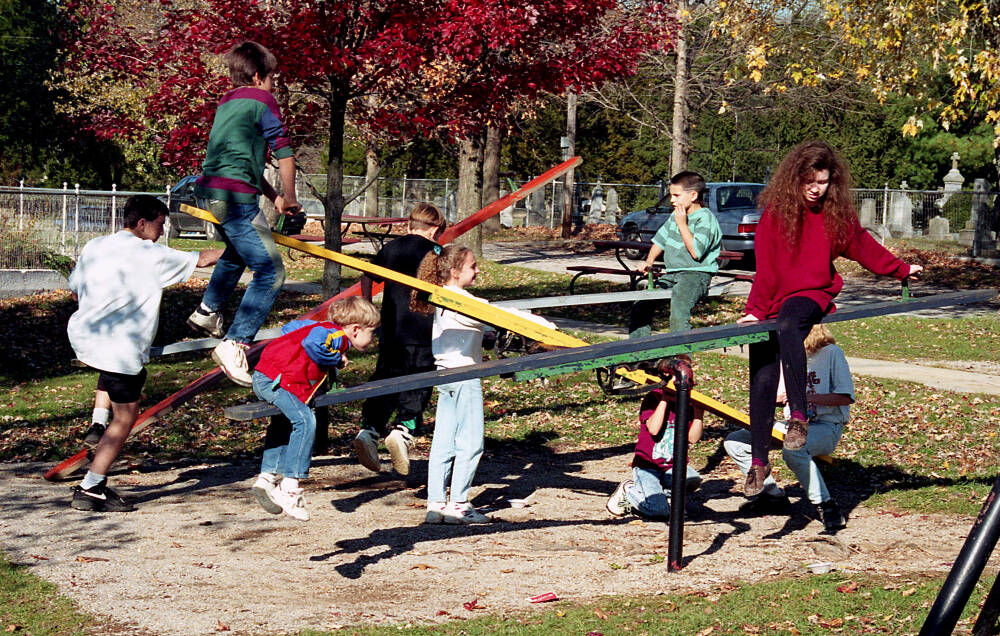