From the archive: Meet a lucky man -- Harold Kuehle 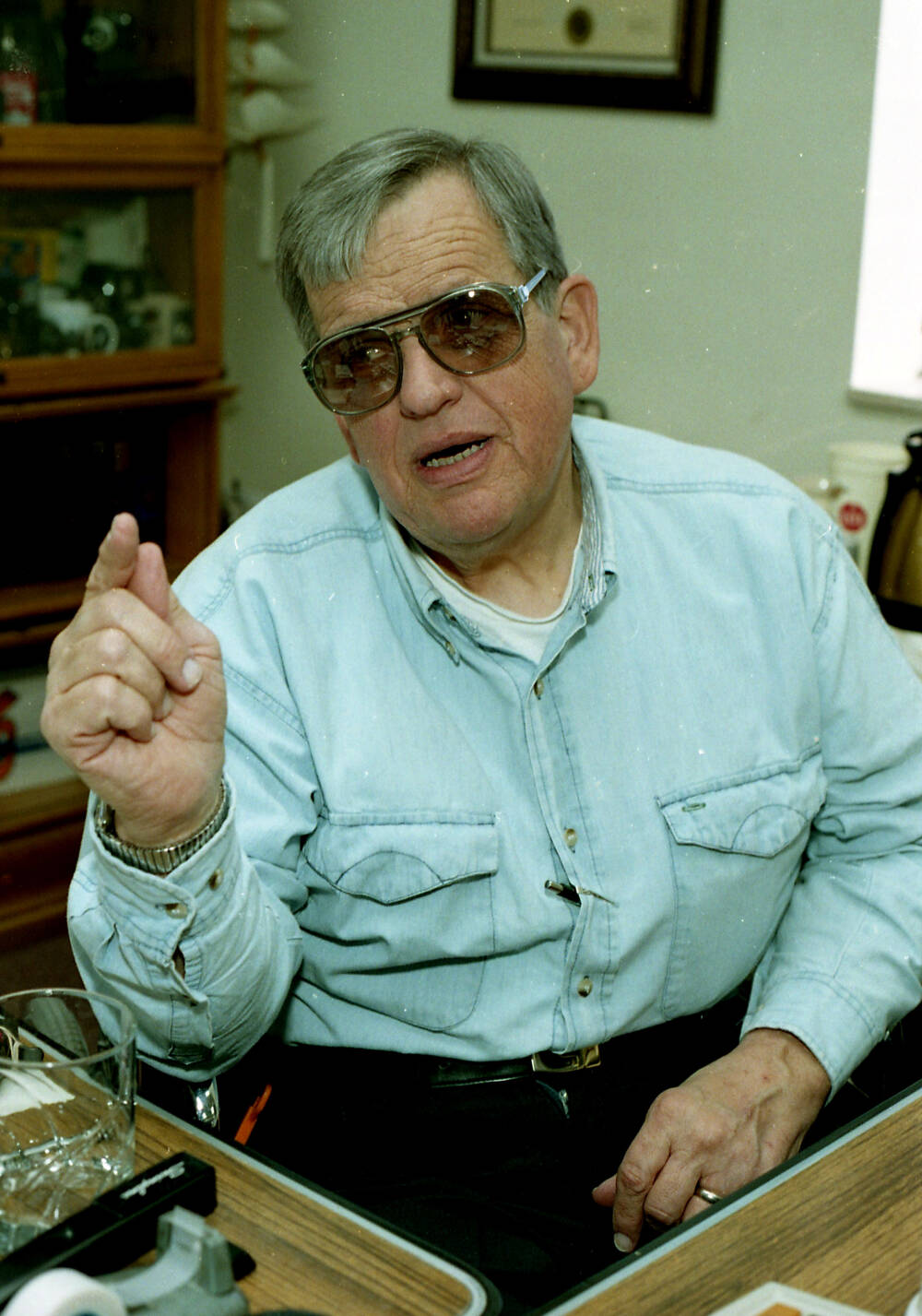 Harold Kuehle has served Cape Girardeau County for some 30 years, first as public administrator and then as county collector. His name is on the ballot next Tuesday, unopposed. (Fred Lynch ~ Southeast Missourian archive)

UP ON HIS LUCK

At 59, he has a loving family, good friends and enjoys his service to Cape Girardeau County as its<

A year of heartbreak

But in a period of 11 months, everything changed.

When Kuehle was 16, his father was killed in a car wreck in 1951 on old KVFS Hill. The tractor-trailer rig at the truck stop had broken down on Highway 25. His dad and a worker made the repairs and were on the way back.

A young man in a hurry passed in a no-passing zone -- striking his father's vehicle head-on, killing him. Ironically, the truck the young man passed was driven by Kuehle's brother.

"My brother knew there was a collision, but he didn't know who was involved until later," he says.

More trauma came on Oct. 10 of his senior year at a football game. Cape Central High was playing Charleston.

"It was a rough game. There was a lot of knocking around that night."

By halftime, he was hurting, and experienced two severe Charlie horses in his legs.

Ironically, it was one of the best games he ever played. The Tigers won the game, and Kuehle blocked a punt.

"The harder I played and the faster I ran, the better my legs felt."

But by game's end, he could barely walk. He bent over to pick up a shoe and had trouble getting back up.

Kuehle can't remember the particular hit or tackle that caused his injuries. But within 24 hours, he was paralyzed.

The morning after the game, he went to the doctor and then was hospitalized locally. A few days later, he was rushed to Barnes Hospital in St. Louis for surgery. His spine was swelling so the doctors made an incision to relieve the pressure. Without the surgery, the doctors said he would have died.

He remained in intensive care for three weeks.

"I got a shot in the hospital, I woke up and I couldn't move. That was it. I was just a kid. I thought I had a broken leg. I figured in a few months I'd get better."

But the paralysis was permanent.

He went through all the normal stages of grief -- denial, anger, depression. His friends and family really pulled him through -- helping him from staying in one stage too long.

The St. Louis hospital sent him home around Thanksgiving without much hope for his prognosis.

But he survived, and the slow road to rehabilitation began. He spent more than two years in the hospital -- 16 months at one stretch. At one point, doctors were forced to remove a kidney to quell constant infections.

"I just didn't give up. It wasn't a conscious thing. I don't know where it came from."

He finished his high school studies from his hospital bed -- thanks to a phone hookup to the Cape Central High School.

After high school graduation, Kuehle wasn't sure what the future held.

His family was understandably protective, but to the point of trying to do everything for him. A rehabilitation counselor, Linus Bartels, persuaded both Kuehle and his family the best thing for the young man would be college. The University of Illinois at Urbana had a handicapped-accessible campus, the brainchild of a man trying to recruit disabled veterans.

"It was the best 18 months of my life as far as rehabilitation," he says. Kuehle played wheelchair basketball and football, traveled the country and flunked out.

"I had no study habits when I went to school, and they enrolled me in engineering courses. I didn't have a chance. But when I got to school I didn't know how to use a wheelchair. The day I came back I wasn't afraid to do anything."

He learned basic wheelchair survival skills such as how to do wheelies to jump the curb or travel downhill. He learned to fall out of his chair and get back up on his own. He learned the confidence to deal with each new situation.

When it comes to a disability, some people learn from it and some people never get over it.

"Those people are absolutely miserable and the people around them are miserable. You have the same emotions, the same ups and downs as 'normal folks' do. That doesn't change. But you have to make up your mind to succeed."

He quoted a Christian writer who suggests that everyone begin the day by looking in the mirror and saying:You are now looking at the person responsible for your happiness this day.

After the University of Illinois, Kuehle went to work at Davis Electric in quality control.

Some of his friends, who were members of the Sigma Phi Epsilon fraternity at Southeast Missouri State University, coaxed him back into school. They volunteered to help him to all his classes.

"Guys that never made it to their 8 o'clock class in their life, got up to help me up those steps," he said.

As a business major, nearly all his classes were in the basement or third floor of Academic Hall. Other students pitched in as well.

His fraternity name of "Wheels" caught on. His four-year degree took 5 1/2 years and three summer schools to achieve. It wasn't until his junior year Kuehle began to apply himself.

But by the time his senior year rolled around, he was ready to put his business principles to use and opened a campus bookstore on Broadway. He competed against the university bookstore, and suffered from undercapitalization.

He next worked as a sales manager at a local radio station.

He became involved with the Barry Goldwater presidential campaign in Missouri, and friends suggested he try his luck at county public administrator. He ran against Stan Grimm, a local attorney and now appeals court judge. They both spent $50.

The race was so close, Kuehle didn't discover he had won until all the absentee ballots had been counted the Friday after the Tuesday election.

"When I ran in 1964, the county Republicans could have held our Lincoln Day banquet in a phone booth at the Arena Building," he jokes.

"He had been in a long time, and was considered 'Mr. Democrat.' Nobody gave us a chance."

Kuehle was active with the Cape Girardeau Jaycees by that time, and they lent their support as did his fraternity brothers. Over the years, Kuehle has also been active with the Kiwanis and the Grace United Methodist Church.

The victory stunned Kuehle and nearly everyone else. "I won by a big margin -- 3,000 votes."

His first year in office was a stormy one. Kuehle decided to mail delinquent tax notices going back five years as a way to clean up the books.

The office was deluged with phone calls by people who not only had a delinquent notice, but had a paid tax bill.

A scandal ensued. About $9,000 of county money was missing. The case was eventually settled out of court with a former worker, and the money was repaid.

He has been re-elected each time since, every time but once without opposition.

Kuehle feels there's too much duplication of services in state government. He would like to see property taxes be paid when car licenses are renewed. He praises a new data base that will allow license-fee offices to confirm property tax payments if receipts are misplaced.

"Even I misplaced mine once, and had to pay my dollar for another copy," he says. "My staff got a big kick out of it."

He met his wife of nearly 25 years, Peggy, in the collector's office. She was his chief deputy in the office.

After three years, they became engaged and she transferred to the county auditor's office. She has worked there ever since.

"One day I was a footloose and fancy free bachelor and the next day I was married with four boys, ages 12 to 4. It's worked out well."

The year they married was a busy one as Kuehle was president of the state Jaycees at the time. A few days after the honeymoon, he packed his bags and left -- to attend a Jaycee meeting in Jefferson City.

"No doubt that made the neighbors talk," he laughs.

His travels continued when he served as a national Jaycee director.

A race for statewide office

His local election successes didn't transcend his one statewide race. John Danforth, then attorney general, approached Kuehle about running as secretary of state in 1972. The state party wanted geographic balance. The ticket included Christopher Bond for governor, Bill Phelps as lieutenant governor, Danforth for attorney general, Kuehle for secretary of state and George Parker for treasurer.

Kuehle announced his intentions to the Cape Girardeau County Lincoln Day dinner in February of that year. It brought the crowd to its feet.

"It was an emotional night," recalls Kuehle. "Not that many people in Cape Girardeau run for state office."

Campaigning across the entire state turned out to be a hard grind. His opponent was the popular James Kirkpatrick, a veteran of state politics.

He visited some 80 counties and found fund raising a tough task because a statewide campaign required so much more money.

"I knew I'd get gunned down, but I came closer than anyone else ever came."

Despite the odds, the defeat was still rough. "It was a humbling experience."

But Kuehle said he realized that well-qualified local governments were essential for state government to really work. He returned to Cape Girardeau County to become the best collector he could.

His name will appear on the ballot unopposed next Tuesday. Kuehle says this four-year term will be his last run for public office.

"Unless there's an opening for king," he quips.

And he loves to collect -- whether it be county taxes, old-time cameras or junk.

A few of his 120 cameras can be found in a bookcase behind his office desk. One bears the name of Donald Duck, another slender version is a vest pocket version.

Perhaps his favorite is a 1894 panoramic camera with a swing lens. He loves to take photographs with the old cameras, cutting his own film when necessary.

No doubt his zest for life, and living, helps him to capture the world in his own unique perspective.

BIOGRAPHY
Name:Harold Kuehle
Age:56
Occupation:Cape Girardeau County Collector
Political experience: First elected as Cape County public administrator in 1964. In 1968, he was elected as county collector and has been re-elected each year since. In 1972, he ran for Missouri Secretary of State.