From the archive: I. Ben Miller's 'big cow palace'

I. Ben Miller was a man of ambition. In the mid 1880s, having passed the examination to become a pharmacist and having worked three years as a drug clerk and assistant postmaster in Minden, Louisiana, he returned to Cape Girardeau, becoming associated with J. Maple Wilson in a drug store on Main Street. A short while later, Miller branched out on his own, opening a store on Main Street.

As the popularity of Miller's ice cream grew, he was forced to buy more and more sweet cream from as far away as Marissa and Chicago, Illinois. He finally made the decision to start his own dairy operation, importing purebred animals from Guernsey Island, according to his obituary. Naming his farm after his daughters — Lila and Clara Drew Miller — Miller established Lila Drew Farm on North Sprigg Street Road in the summer of 1920 and erected a fine, "big cow palace" for his bovine ladies. In October of that year, Miller opened his operation to the public. The diamond of the operation was the large dairy barn, built by contractor Sam Boutin.

Here's the article published in the Oct. 21, 1920, Southeast Missourian describing the opening and the "cow palace." 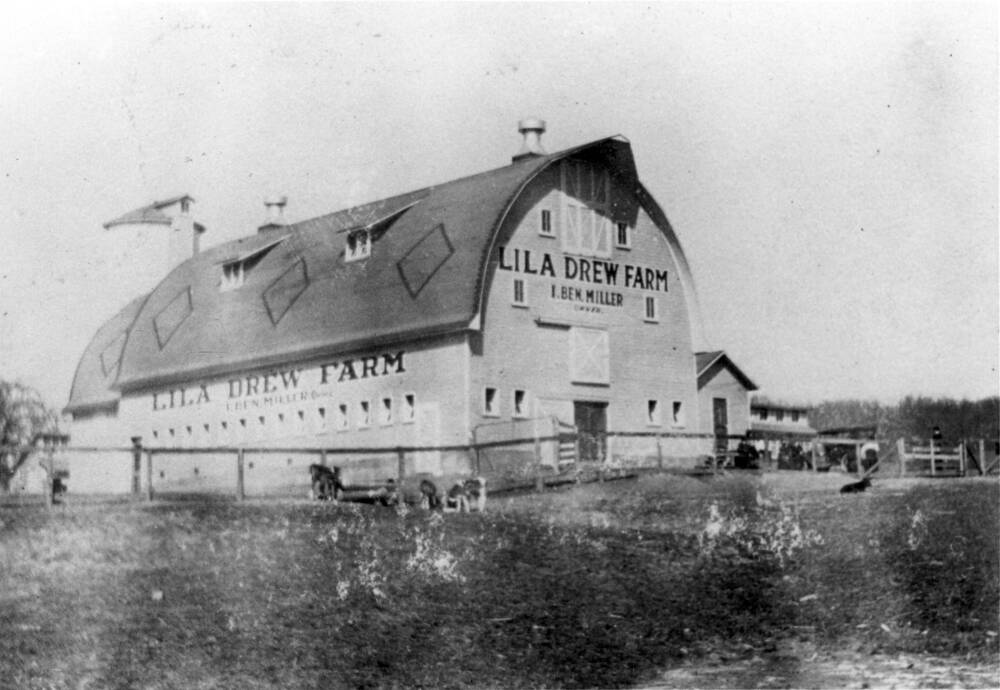 The Lila Drew Farm on North Sprigg Street was owned by I. Ben Miller and supplied cream for his ice cream factory in Cape Girardeau. It was named for his daughters, Clara Drew and Lila Miller. (Michael Hahn photo ~ Southeast Missourian archive)

I. Ben Miller celebrated the formal opening of his great new dairy barn Wednesday evening in the presence of a few guests who saw superintendent Charles Willer lead into the palace 22 heifers and assign them to their stanchions.

It had been expected that some of the Guernseys might "act up" a bit but, without exception, every one walked in and put her head through the modern "halter" just as though she had been accustomed to such treatment.

Then the first meal in the new barn was served and some one remarked that the blooded animals had better manners and made less disturbance than is some times heard at a boarding house.

The opening of the new barn does not mean that it is complete in all details. The water system, which will constantly supply fresh water to the animals, is not working. A deep well was sunk near the barn and the water will be pumped by electricity to a large steel tank, which will also be charged with compressed air. This pressure will force the water through the pipes to the individual drinking cups for the animals, as well as to water troughs in the several lots.

To build up herd

In the large barn are stanchions for 20 cows, with a large pen for calves and two large box stalls for special uses. Mr. Miller expects to keep on hand all the time 20 milk cows and perhaps a herd male. He will also have several calves on hand most of the time. At present he has 22 heifers and one calf. Only one of the heifers is fresh. Within the next four or five months all the heifers should be fresh. As soon as the heifers come fresh a special test will be made of each. Those that do not measure up to a high standard will be weeded out and through this careful process a herd of extra fine animals will be built up within a few years. All of the animals, with one exception, are imported stock.

It is nearly impossible to describe the dairy plant erected to serve as a model for Southeast Missouri. The barn is the main feature and it us a building that is as modern and perfect as money will provide. It has a great concrete silo at the north end that is filled. The tremendous loft is filled with pea hay that was raised on the farm and the special bins for grain feed are filled so there is feed enough on hand to carry the herd through the winter.

The barn has a concrete floor and is especially arranged for sanitary purposes. A track circles the ceiling which carries a large metal container. When this is filled with refuse, its weight carries it to a concrete dumping bin out in the lot away from the barn and when it stops suddenly, it is dumped and forced back into the barn through its own power.

The feed is delivered to the cows in trucks which get the grain through troughs leading from the loft. The windows let down from the top so the wind does not blow directly over the animals and are screened. In each corner of the barn is a vent to carry away the foul air.

To care for milk

Between the barn and the beautiful modern bungalow in which Mr. Willer and his family life, is a milk house. This is a frame building set on a concrete foundation. The basement of the building is over the deep well and will contain the water tank. An electric pump will automatically keep the tank filled with water and compressed air. This milk house will have all facilities for properly caring for the products.

To make the plant more complete a machinery house is provided for the Fordson tractor and other implements, a chicken house with every modern convenience, a hog house of the same character and then a small hospital building set away from the other buildings completes the outfit. It was necessary to have a special electric line built from the city limits to the barn.

As much attention has been given to the farm as to the buildings, and before spring arrives every fence, walk, etc., will be perfect. Mr. Miller has not wasted any money on ornaments or "gingerbread" work but has tried to make his place a model for practical work.

Just as soon as the water system is installed, which probably be within the next two weeks, the place will be complete and then will be ready for inspection.

On April 28, 1928, Miller, who was getting along in years, sold his ice cream plant to Midwest Dairy, and in 1935 he disposed of his Guernsey herd. At the time it was said he was being forced out of business because of high operating costs. But he retained ownership of the farm.

Isaiah Ben Miller passed away Feb. 19, 1938, having been critically ill only a few hours.

The farm went through several hands after his death. Finally, in the mid-1960s it was purchased by Loy Crites and Charles N. Harris for development. In 1967 the "cow palace" and the other farm buildings were razed to make way for an apartment complex. 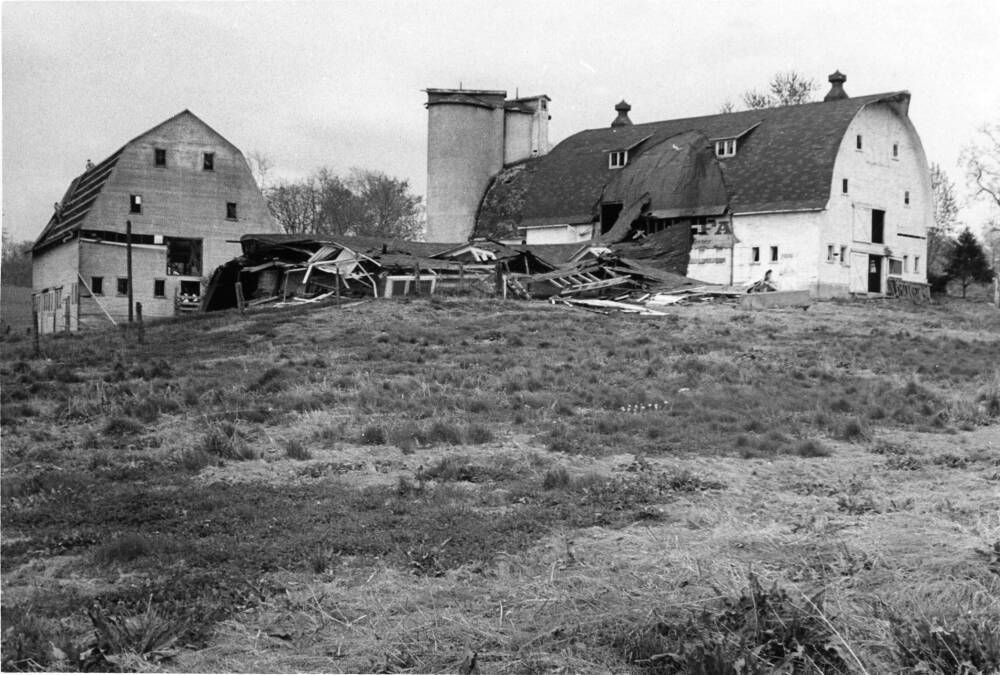 Published April 28, 1966: These buildings on the old I. Ben Miller farm, North Sprigg and Bertling streets, are being razed to make way for a new residential area of the city's north side. The farm was most recently used as a dairy farm by the Schonhoff family and has been purchased by Loy Crites and Charles N. Harris for development. Streets will be constructed through the 45-acre tract, it was reported. (Southeast Missourian archive)