From the archive: Harris Field and its Warbirds helped win WWII

In honor of the holiday tomorrow: Thank you, veterans of all wars! 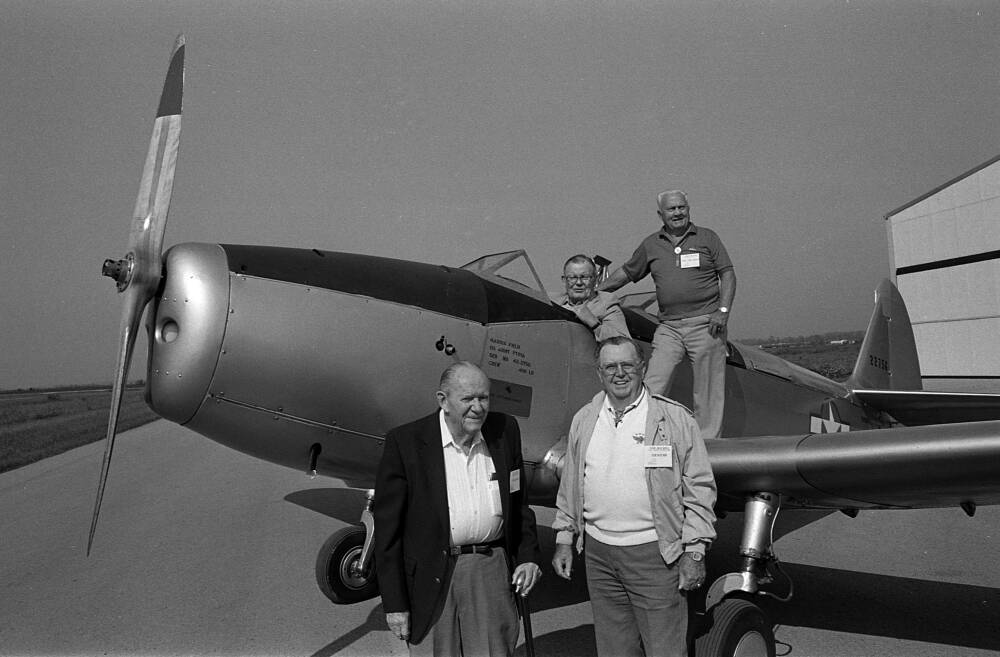 Members of the Harris Field "Warbirds" held their 1992 reunion in October in Cape Girardeau. Among those attending were, standing from left, Alden D. "Woody" Woodbury and Fulton "Skeeter" Moore. In the cockpit of a restored PT-19 aircraft is Art Edwards. Beside him is Carl "Chub" Wheeler. (David Hente ~ Southeast Missourian archive)

From across the United States they came to Harris Field at Cape Girardeau during the darkest days of World War II. They were young men in their late teens and early twenties, many of them fresh from the Army Air Force's civilian instructor pilot training school at Randolph Field, Texas.

Their mission: to teach – in a nine-week period – elementary principles of flight to aviation cadets, most of whom were about the same age as their instructors, some even a little older. If they didn't wash out, the cadets would leave Cape Girardeau to go on to advanced pilot training. Many of them went to England, where they piloted Army Air Force B-17 bombers and fighter planes that dueled at 40,000 feet over Europe with the German Luftwaffe.

Over the weekend, 34 of the remaining Harris Field pilot instructors returned to Cape Girardeau to share their wartime memories.

The occasion for this year's reunion of the Harris Field Warbirds was the 50th anniversary of the founding of the 73rd Army Air Forces Training Detachment (AAFTD)/Cape Institute of Aeronautics, Inc., Primary Flight Training School.

During its 1 1/2-year operation, the Cape flight school provided primary pilot training to thousands of Army Air Force cadets. It closed in March 1944.

Among the 34 Harris Field "Warbirds" who were in Cape Girardeau were Fulton "Skeeter" Moore, 76, vice president of the Cape Institute of Aeronautics; Alden D. "Woody" Woodbury, 79, who was responsible for the construction of the flight training school at Cape Girardeau, and similar schools in Sikeston and Jackson, Mississippi; Art Edwards, 78, chief instructor pilot at Harris Field; and Carl "Chub" Wheeler, a pilot instructor. Wheeler continued to operate Harris Field after it was closed, and eventually it was sold to J.T. Seesing, John Godwin and associates, who formed Cape Central Airways, which continues at the airport today.

The "Warbirds" visited the airport to have their pictures taken beside a restored PT-19 aircraft, similar to those used to train Harris Field cadets during the war. 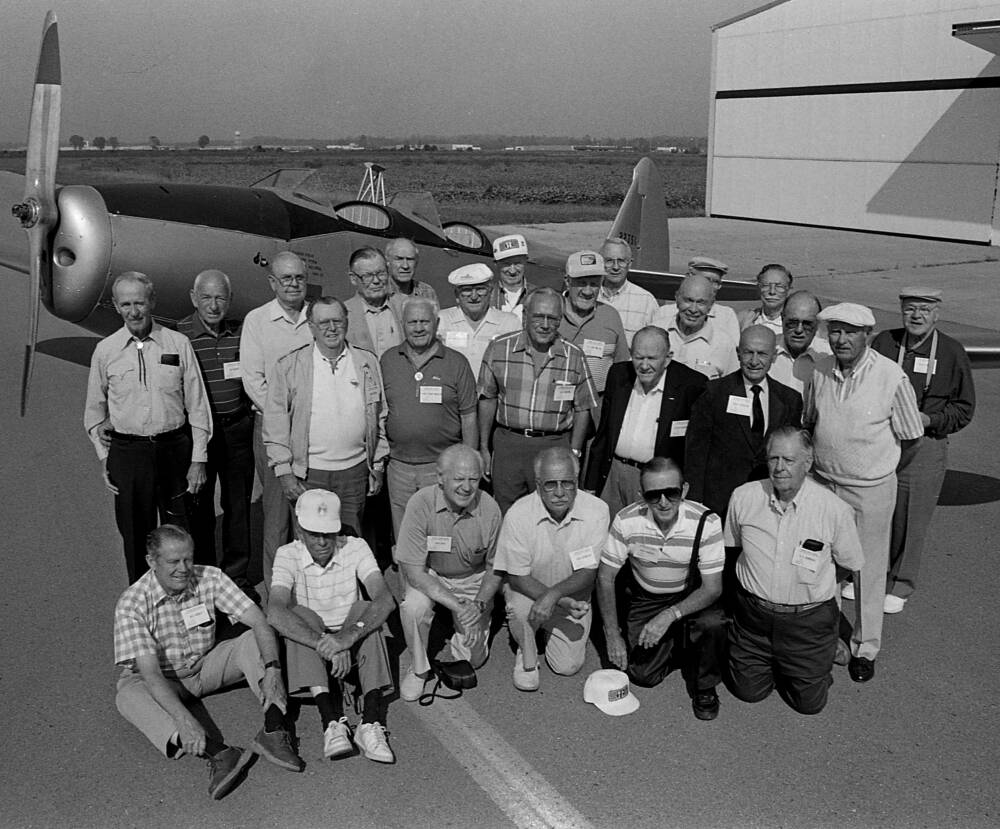 A portion of the 34 men attending the 1992 reunion of the Harris Field "Warbirds" posed for a photograph in front of a restored PT-19 aircraft at the Cape Girardeau airport. Their names were not recorded. (David Hente ~ Southeast Missourian archive)

The Cape school was one of more than 60 flight schools created by Gen. H.H. "Hap" Arnold, commander of the Army Air Forces. "When Hap took over command of the Army Air Forces in 1938, he knew the war was coming," Moore recalled. "He also knew we didn't have an Air Force. When he took command, there were 1,500 pilots and a handful of combat-ready aircraft. Ours was a 'paper' air force. By 1944, Gen. Arnold commanded an air force of 2,400,00 men and women and 80,000 aircraft."

Moore said in the fall of 1938, 10 months before Germany invaded Poland and ignited World War II, Arnold called the owners and representatives of civilian pilot training schools around the country to Washington. One of them was Moore.

"General Arnold told us we were going to be in war very soon and that he had to build an air force almost overnight," Moore said. "He told us the day was near when he would need 100,000 pilots. At that time, the Army Air Force could only train 750 pilots per year, and even if all of these became instructors, there would not be enough of them to train 100,000 pilots in the short time he had before the war. Gen. Arnold had to find instructors elsewhere. He decided to use civilian flying schools for at least a part of the pilot training program."

After the decision was made to use civilian-operated Army Air Force flight training schools, Moore said money had to be found to build the schools.

"Gen. Arnold knew that, and he also knew that he had no authorization to provide the money for the schools," said Moore. "We took our Army Air Force contracts to local bankers and told them we needed at least $200,000 to build each school. The contracts weren't worth the paper they were printed on, but the banks went ahead and lent us the money anyway. The money was eventually appropriated by Congress after the war started, and all the loans were paid off. Looking back on it, Gen. Arnold could have been court-martialed and gone to prison, and we would have been right in there with him for what we did."

Woodbury said the Cape Girardeau school was completed in about three months, after problems with land acquisition were resolved by a Catholic priest from Kelso, who met with the German-American farmers that owned the land.

"It had been in their families for generations, and they just didn't want to part with it," Woodbury said. "But after the priest spoke with them, they agreed to sell."

The first cadets arrived by train in Cape Girardeau in December 1942. At the height of its operation, the 73rd AAFTD at Harris Field had a cadet corps of about 500 in each of its nine-week classes. During the morning, half the of cadet corps was in ground school classrooms while the other half were in the air training. In the afternoon, it was reversed, said Wheeler.

Although there were civilian flight instructors and other civilian employees working at the school, it was still under the command of an Army Air Force captain, who was assisted by staff officers.

Harris Field had a sod runway, but Moore said it couldn't be used in wet weather. The cadets and their instructors would take off on the asphalt taxi strip in front of base operations then do their landings and takeoffs at auxiliary sod runways located around the airport, including one north of Chaffee and another near Commerce.

When not in training, Moore said the cadets enjoyed the hospitality extended to them by the citizens of Cape Girardeau.

"As the manager of the flight school, I received baskets of mail from the parents of these cadets who had told their parents how much they liked Cape," said Moore.

"As for us, we spent a lot of time at the Colony Club, solving a lot of problems and entertaining visiting brass."

Moore said the Cape school was the largest of the five Parks schools. It was also the only Parks school that published a "yearbook" for each class during its brief existence.

"As for the cadets, they came from all over the United States," Moore said. "After they were sworn in and completed their Army basic training, they were shipped to primary flight schools, such as the one at Cape. At the end of the nine weeks, the cadets were supposed to know how to fly and maneuver the PT-24 training aircraft. The washout cadets went on to become navigators or bombardiers.

Moore said time was critical. What should have been a full year of pilot instruction had to be compressed into 27-30 weeks worth of intensive training.

"But we had no choice. The war was on. We needed pilots, and we needed them now," he said.

As to which cadet went on to become a bomber or fighter pilot, Edwards quipped, "Most of the pilots that were weren't too stable, and were a little bit flaky and nutty ... they sent them to fighter pilot school."

Moore said the 1992 Harris "Warbirds" reunion at Cape Girardeau will probably be the last for the group because of the advanced age of its members. 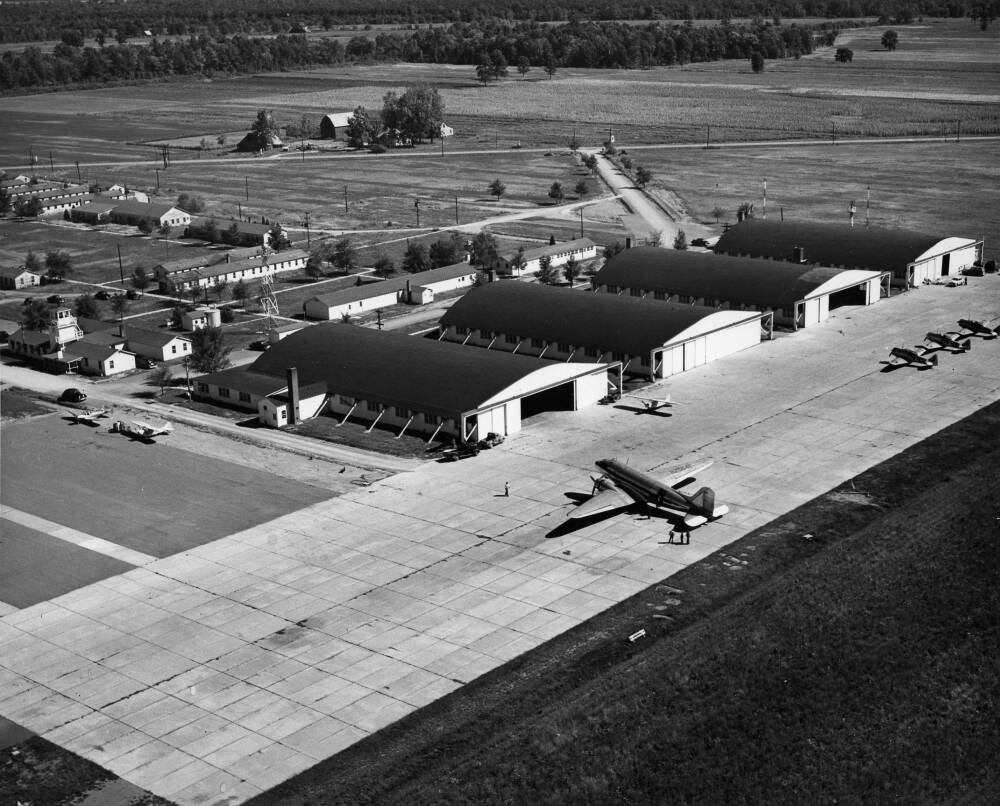