It's always nice to see old buildings re-purposed and given new life.

Much like Cape Girardeau's old police and fire station on Independence Street which houses the Cape River Heritage Museum, Cairo's old Custom House also continues to serve the community as a museum. 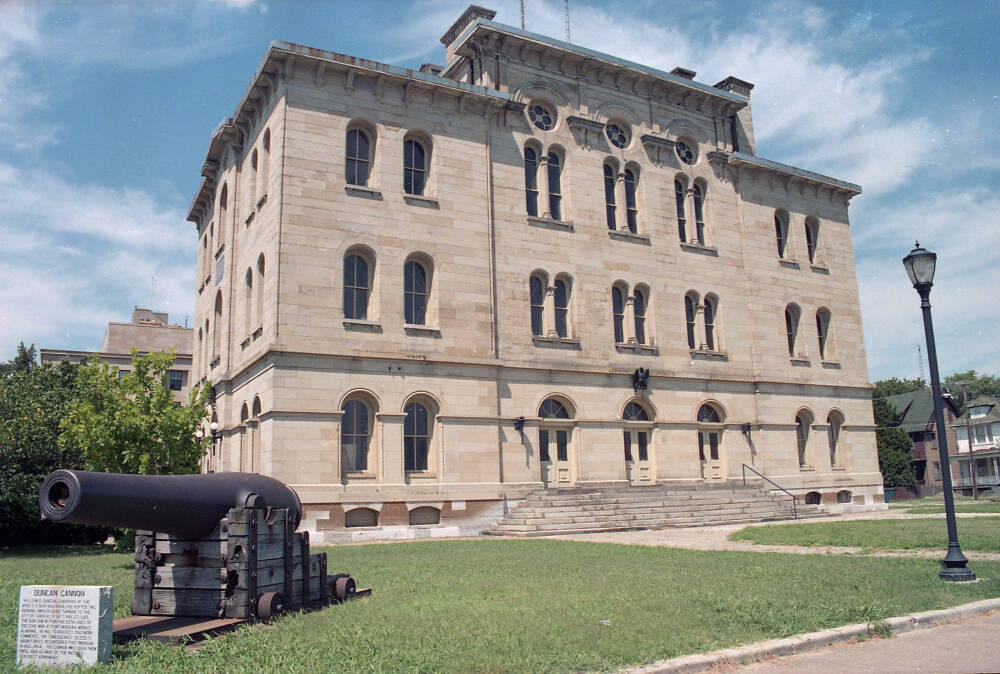 Cairo's Custom House at 1400 Washington, which is being refurbished into a museum. (Chris Stanfield ~ Southeast Missourian archive)

CAIRO, Ill -- About 12 years ago Cairo city officials began pondering the fate of a historic building known as the Custom House along the main street through town.

Built during the Civil War and first used in 1872, the three-story structure had stood empty since 1975, when the police department moved from it to a building of its own across the street.

The interior of the building was deteriorating, and it was an easy target for vandals. As city leaders contemplated the building's future, they knew that without immediate attention demolition was its certain fate.

"The city owned the building and it was becoming quite a drag on them," recalled Louise Ogg, the city librarian at the time. "There was talk about tearing it down."

Ogg, her husband, Russell, and others in the community got together to discuss a way to save the historic structure.

The mayor appointed a six-member commission that included Ogg to oversee a project aimed at saving the building. The group's first priority was to stabilize it from further deterioration.

A state grant from Build Illinois enabled them to take care of the outside. With the help of countless volunteer hours and a little money the first floor was restored.

In September 1992, it was opened as a museum. Eventually, said Ogg, all three floors should be open for public viewing.

"There was a lot of work, not much money, and we've had an awful lot of volunteer labor," said Ogg, who apologized for having lost track of the many hours donated toward the building.

The commission was given items to display. Some are stored for future display.

"Once we got it started we have received all kinds of gifts, loans and things from people in the community to put on display," said Ogg.

The third floor, which was a federal courtroom, eventually will be restored. "When the courtroom is finished it will be magnificent," said Ogg. "It is probably the last thing that will be done." 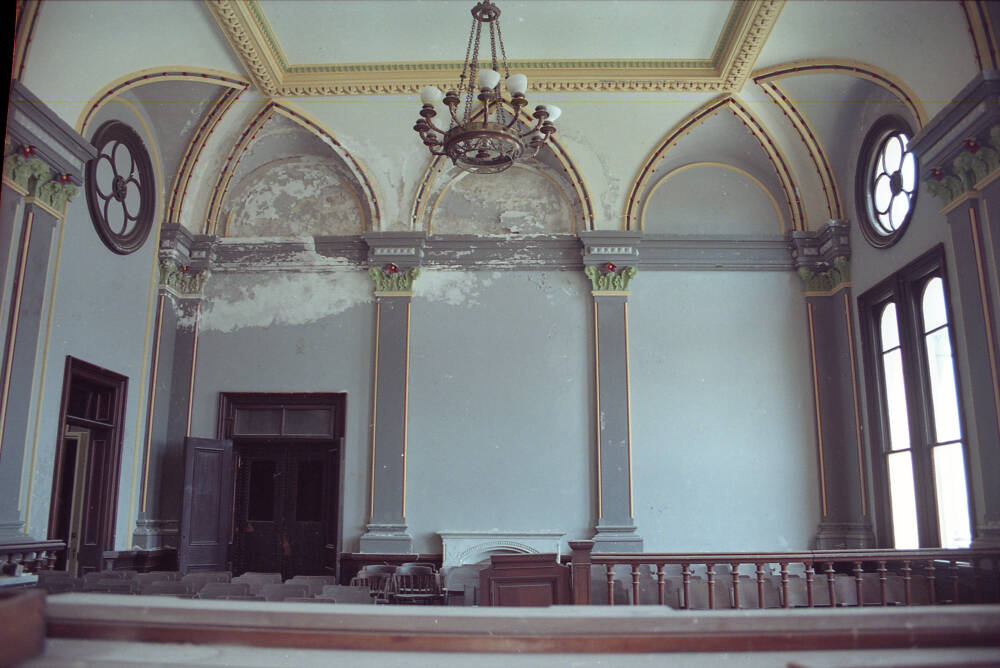 The high ceiling in this third-floor room of the Custom House is typical of ceilings throughout the building. The floor, once a federal courtroom, is still being restored. (Chris Stanfield ~ Southeast Missourian archive)

The city this year received a $190,000 grant through the Illinois Department of Transportation and the federal highway bill to help restore the Custom House.

Ogg said the museum will be easy to convert for handicapped accessibility since it already has an elevator. Installed during the 1890s, the Otis elevator was originally steam driven; it since has been converted to run on electricity.

Ogg said the building, which is on the National Historic Register, should be saved for its unique architecture alone. It was designed by Alfred B. Mullett, one of the foremost architects of his day, who also designed the old post office in St. Louis, part of the U.S. treasury building in Washington, and the San Francisco mint.

The foundation is made of Cave-In-Rock sandstone. Indiana stone is used for the outside superstructure. An unusual architectural feature is arched ceilings in all of the rooms, said Ogg.

"I think, if for nothing else, the building should have been saved for the architecture," said Ogg. "But our first thoughts were that we did not want to lose the building and needed to restore it. When we started looking at what to do with the building, we decided a museum would be good since there is no place to preserve the history of Cairo."

Jean Swoboda, one of the museum volunteers, said many people stop by and are impressed by the building and its contents. One of the main attractions is a desk used by Gen. U.S. Grant for his command at Cairo during the first six months of the Civil War.

There is also a scale model of the Civil War gunboat Cairo, which was built at Mound City and put into service in 1862. It sank on the Yazoo River during a battle months later, but the actual gunboat has been restored and is displayed in Vicksburg, Mississippi.

"We get an awfully nice response from people," said Swoboda. "Everybody has done a nice job getting this building restored, and people can see that and appreciate it." 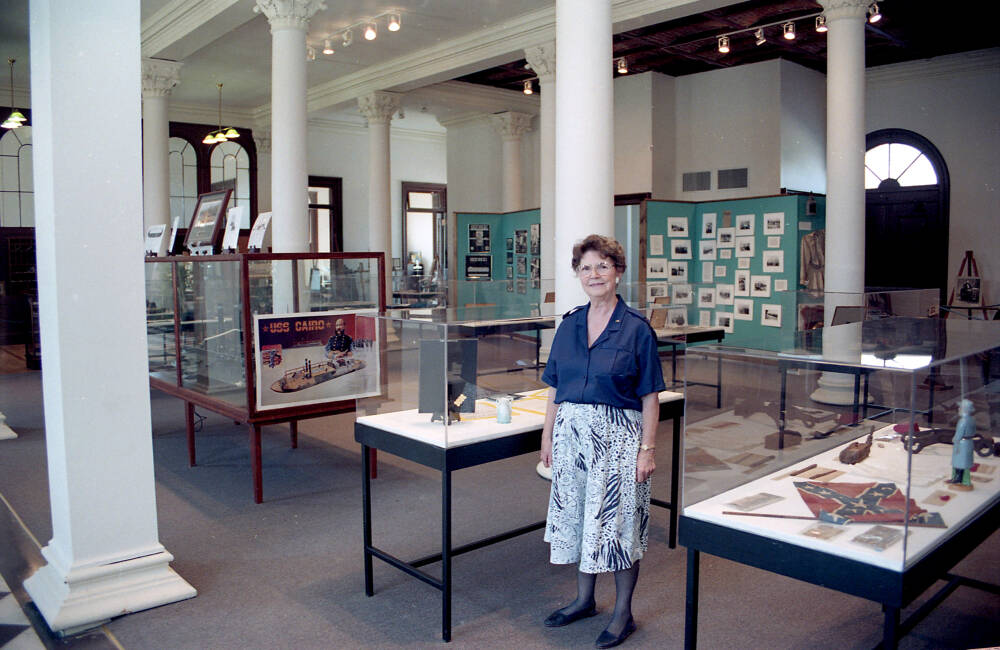 Jean Swoboda, a Custom House tour guide, in a portion of the building that has been refurbished. Renovation of the historic building continues. (Chris Stanfield ~ Southeast Missourian archive)

Some of the other displays include exhibits on river and bridge history, the National Associated for the Advancement of Colored People, information on when the baseball Cardinals trained in the city during World War II, flood history, and an 1865 pumper fire truck. Outside the Custom House are cannons, a gunboat anchor, and a railroad caboose.

Visitors come from all over the country...

Situated at 1400 Washington... There is no admission charge, although donations are accepted. Special tours can be arranged.

Ogg said the museum has a bright future and displays will be added.

"We have had an exceptionally large number of tourists this year. We've been real pleased with the reception we've received," said Ogg.

One sign that the museum volunteers are doing a good job, Ogg said, is the fact she was recently notified by the Smithsonian that it will stop at the Custom House on its Civil War tour in October. This is the second year for its visit.

"That means we must be doing something right," said Ogg.