From the archive: Cape's wall a thing of beauty during times of flood

Not every new idea or concept gains immediate acceptance. This was certainly true of Cape Girardeau's floodwall.

On the heels of the crest of the Great Flood of '93, staff writer Sam Blackwell took a look at the controversies that greeted the downtown flood-control plan. 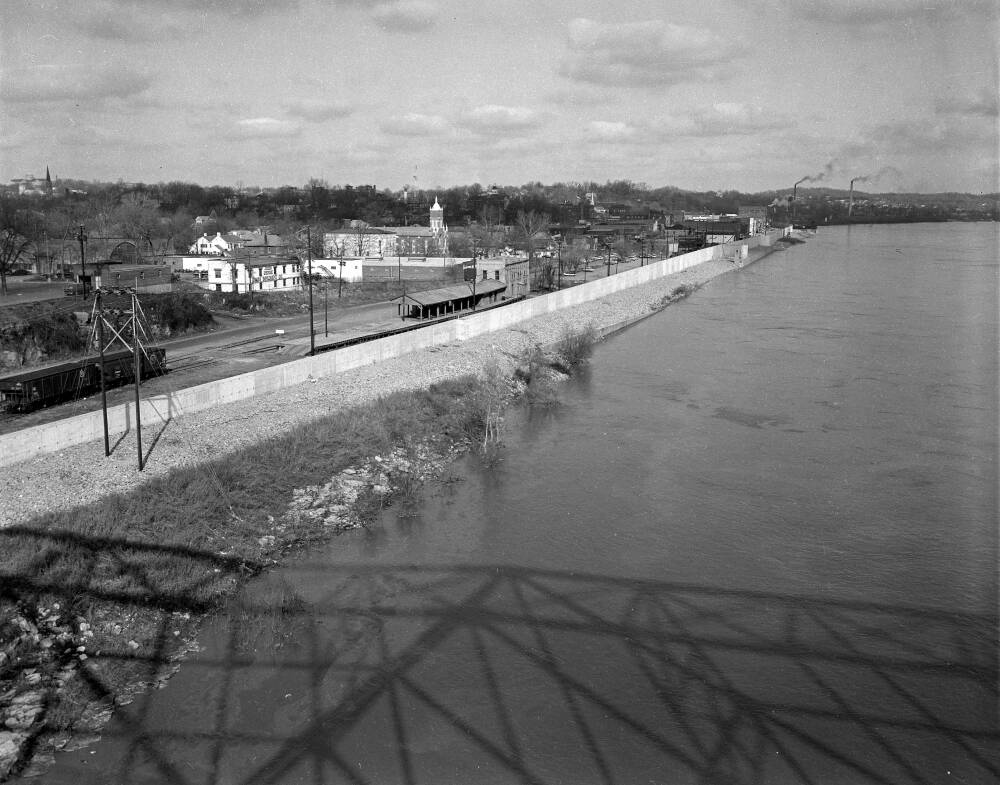 FLOODWALL WASN'T POPULAR AT ITS START

When Col. James Meanor, then district engineer for the U.S. Army Corps of Engineers St. Louis office, dedicated the floodwall in October 1964, a controversy that had dogged Cape Girardeau for 20 years finally was settled.

In question was the best way to protect downtown Cape Girardeau from the increasingly frequent Mississippi River floods. Everybody seemed to have an opinion and a plan. One, never formally proposed or seriously considered, called for building a folding floodwall that could be laid down during non-flood years.

Three plans were proposed and debated until the Corps finally finished specifications on the floodwall in 1955. It may have held back the mightiest flood in the river's recorded history this year, but back then support for building the wall was leaky indeed.

Some merchants were happy just to be above water, said former Southeast Missourian editor John Blue. Others weren't. "They thought it would be detrimental to the business life of the community."

Some citizens feared that the most important part of the city's identity was about to be hidden permanently.

Blue recalls that the newspaper did not endorse the plan to build the floodwall.

"The coming of the floodwall was not welcomed by a lot of people at Cape Girardeau," said Meanor, now retired from the Corps and living in St. Louis.

Meanor, who supervised only the final stage of the eight-year floodwall project, said a few other problems arose, primarily with trying to acquire property in the northern section.

With the first planning for a flood control project dating all the way back to 1927, three schemes eventually emerged in the early 1940s.

The Erlbacher Plan was favored by most downtown merchants and property owners. It called for building a concrete seawall from Cape Rock to the railroad freight depot formerly located on Main Street near Merriwether, and filling the adjacent property with sand up to the levee level. 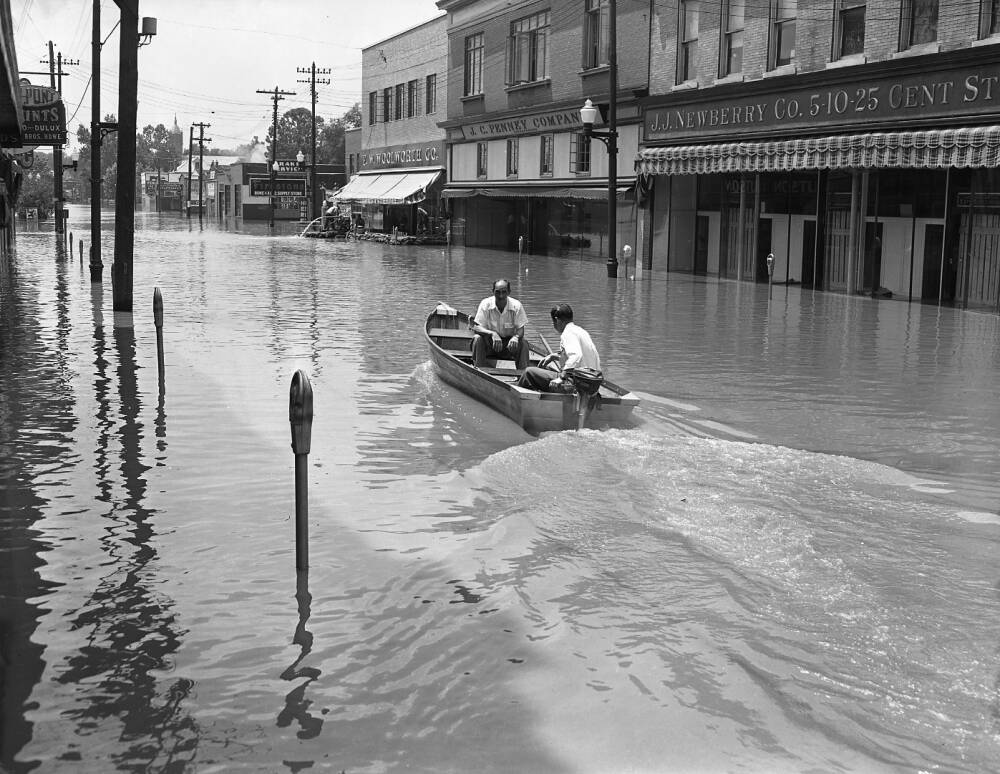 Two men use a motorboat to navigate a flooded Main Street in Cape Girardeau in 1951. (G.D. Fronabarger ~ Southeast Missourian archive)

"Buildings on Water Street to Independence would have to be filled with sand up to the second floor," according to an August 1951 edition of the Southeast Missourian.

"The second floors would then become the ground floors."

"...The concrete wall would be built high enough to cope with the highest possible flood and through the fill-in process it would not appear as a sore thumb from the city side."

The railroad tracks would have been elevated as well, and the building of a riverfront boulevard was envisioned.

There would have been no pumping system and thus no enduring flood protection tax for downtown property owners. The plan also would have avoided hiding the downtown business district behind a tall levee or wall.

That was a goal of the Civic Plan as well, but its sweep was much more dramatic. The government would have bought for right of way all the property from Old St. Vincent's Church on the south to the former Florsheim Shoe factory site on the north (approximately the intersection of North Main Street and Mill Street, and from the river to west to Spanish street.

The plan called for clearing the property, and turning the area into parkland.

The idea was to give the river no more shots at the town's business center. Again, the railroad tracks were to be elevated above flood stage.

The backers of the Civic Plan, which dates to the early 1940s, envisioned moving the Main Street business district into a modern shopping center with plenty of parking and a large bus station.

This was to be located in the Good Hope area.

They expected the result to be "the greatest shopping headquarters anywhere."

The third plan was named for downtown property owner Andy Juden, who proposed protecting only certain pieces of valuable Main Street property, with the cost to be borne by the property owners.

His plan was closest to what came about.

Juden, who died in 1987, was among the community leaders who were instrumental in gathering the necessary political support and money for the flood control project.

Of course, none of the plans was the exact one the Corps finally settled on, and that meant few were entirely happy. 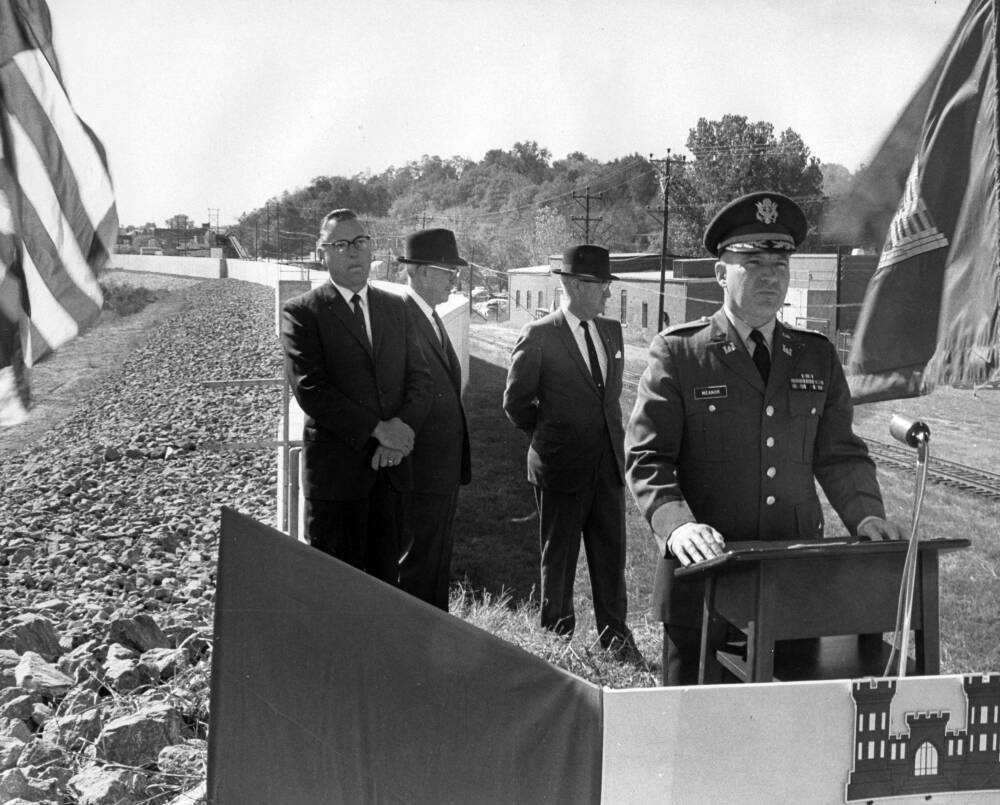 Col. Meanor recalls that the floodwall dedication ceremony was very low-key. "Usually you find a dedication is a day of celebration with the high school band, the mayor, the congressman, the governor maybe," Meanor said.

"We collectively decided that there had been such acrimony that had ridden along with it that having such a show of celebration was not an appropriate thing to do."

Meanor, who also supervised construction of about half the 11-mile floodwall that protects St. Louis, recently saw a photograph of the sign Cape's downtown merchants erected that read:"We love our floodwall."

"I said to my wife, 'That wasn't always true,'" he recalled.

Because of the record flooding this year, the Corps' entire plan for controlling floods along the Mississippi has been called into question. Citing the near 100 percent success rate of Corps levees, Meanor says the program has worked.

"Here we've had a new event which never occurred before," he said. "There are certain improvements that can be made. But I don't think that means the general idea of trying to protect and control is wrong."

Meanor, whose name is one of those on the wall's dedication plaque, says the Corps' work in Cape Girardeau has proven itself as well.

"I'm very proud to have my name up there on the wall." 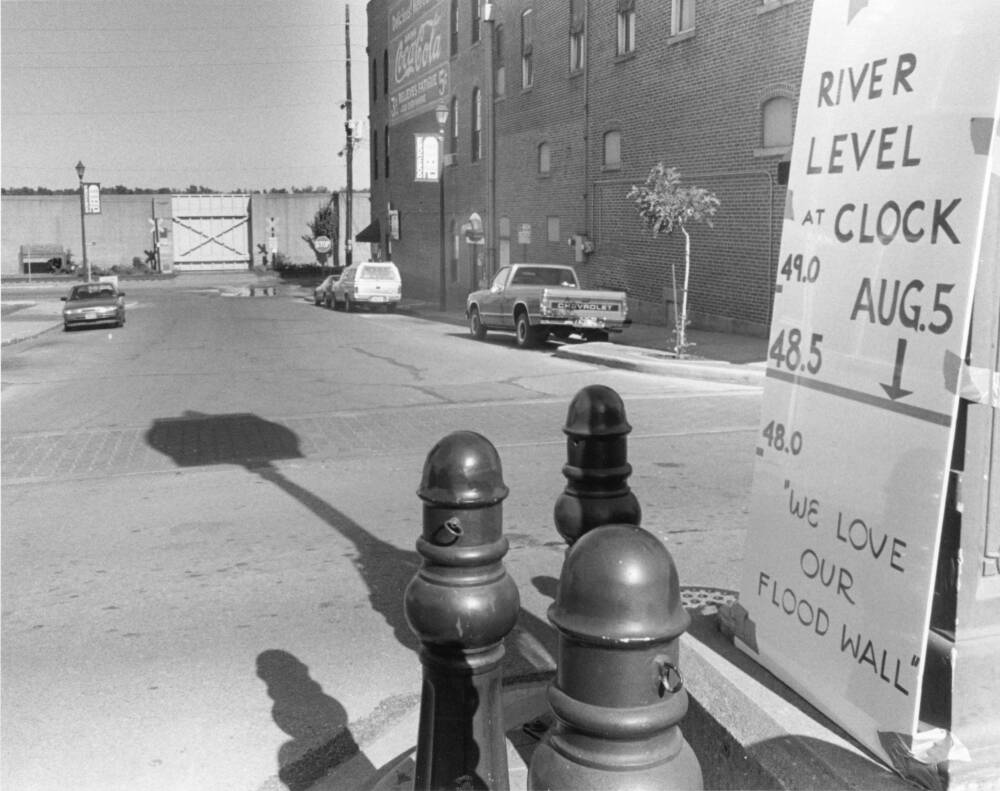 Taken in early August 1993, this photo shows the sign posted at the clock in the center of Main and Themis streets, which declared "We love our floodwall." (Don Shrubshell ~ Southeast Missourian archive)