From the archive: '49 Central High hoopsters reminisce about glory days

In the summer of 1991, players from Cape Girardeau Central High School's 1949 basketball team gathered here for a reunion. Among those to return to his alma mater was former Clemson University president Bill Atchley. Four years later, he would come back to Cape Girardeau to serve as interim president of Southeast Missouri State University, as the Board of Regents searched for Dr. Kala Stroup's successor.

This story about the 1949 teammates was published in the Southeast Missourian July 28, 1991. 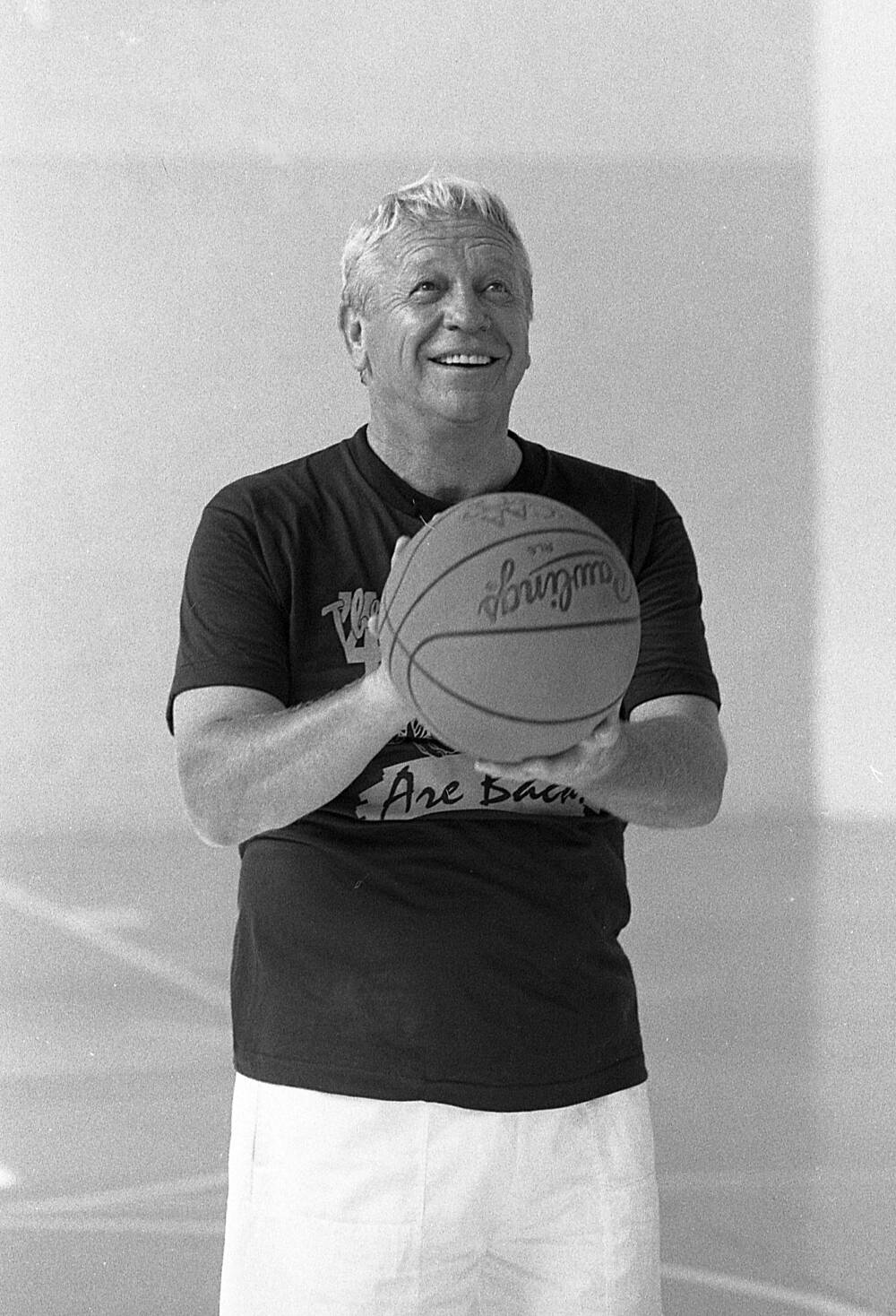 Bill Atchley, former president of Clemson University who is now at the University of Pacific, gets set to shoot a free throw during a reunion of Cape Girardeau Central High's 1949 basketball team. (Fred Lynch ~ Southeast Missourian archive)

FORMER PLAYERS GET TOGETHER FOR THREE DAYS OF FUN, GAMES

The atmosphere was more like the first day of freshman basketball practice than that of a 42-year reunion.

Basketballs flying through the air as everyone worked on their jump shot. Taunting and kidding. Just the general chatter and fun one might expect to see out of high-schoolers.

But for those players who were a part of the 1949 Cape Girardeau Central High basketball team which went to state and finished 17-4, in a way, the hands of time were turned back to their high school days.

The team had its first-ever reunion this weekend with everything from poker and pool, to basketball to golf on tap for the crew.

Of the group, only Porter was unable to attend.

"We've been having a really good time," said Ryan, who put the reunion together. "For guys that are 60 years old, we're all in really pretty good shape. You don't see any big, overweight guys or anyone that's disabled."

As he and rest of his former teammates prepared for a free-throw shooting contest before their old-timers game, Ryan reminisced about the times the team shared together.

"We've been living a few memories," he said. "The lies get a little biggeras we go along. I've got a poem that I wrote that includes a little bit about each of the guys on the team. Some of them may not like it," he said with a chuckle, "but they'll get over it."

The reunion started out Friday morning with the team shooting a round of golf before getting together at the Schultz School Gym, where they practiced in high school, for a little hoop.

Friday night the team had dinner at Broussard's before playing pool and poker at Blattner's home. The team had a three-team scramble golf tournament Saturday, with the losing team footing the bill for dinner at the New Orleans later that night.

The reunion concludes today with a breakfast at Ryan's home, followed by the scheduling of the next reunion.

"I think we're going to try t do it every year from now on," Ryan said.

While on the court Friday, the former Tigers displayed they still have some of the fine form that led them to state in '49.

"I haven't missed a shot from this spot all day," said Ryan as he took a baseline-j from the left side.

"It's been a while since I've gotten on the court," he conceded. "I play a lot of tennis and golf, but I don't play basketball much anymore. A lot of these guys say they haven't played since they got out of college."

All of the players have gone on to lead highly respectable lives. 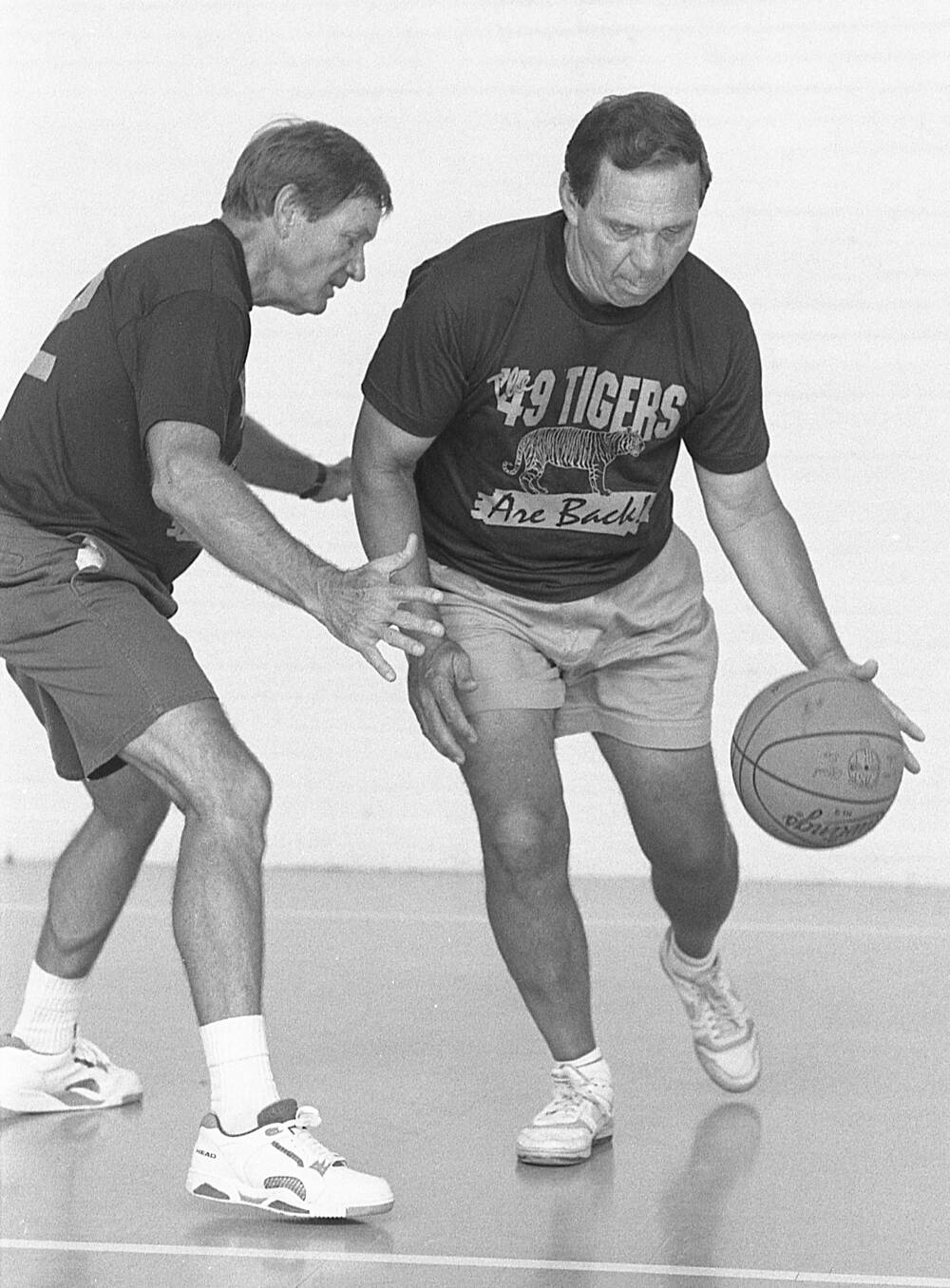 Richard Ryan, left, puts some heavy defensive pressure on Marvin Proffer during the reunion. Both players were part of Central's '49 team that competed in the state tournament. (Fred Lynch ~ Southeast Missourian archive)

From locally successful professionals, as Blattner and Proffer both had, to making an impact outside of Cape Girardeau, as Atchley has done, the players all have become as successful off the court as they were as a team on the hardwood.

Blattner is a prominent local businessman while Proffer was into local politics and now is a fund raiser for Southeast Missouri State University.

Wallace was a superintendent of a school in Hong Kong while Atchley went on to become president of Clemson University and now is at the Pacific College in California.

"We all went on to lead pretty good lives," Ryan said. "We all were pretty good guys in high school. We didn't get in much trouble. We didn't drink or smoke and we didn't even know what drugs were."

A big impact on each of the players was their former coach, Lou Muegge.

Atchley said Muegge was one of the few people outside of his family that left a lasting impression on him.

"I've always said that Coach Muegge played an important role in all of our lives," Atchley said. "He instilled that we would do whatever we wanted in life if we just worked hard enough at it. He set a pattern that I think all of us think about every day. He helped mold me into what I am."

Atchley, who served as student body president during high school and later played professional baseball in the New York Giants organization, said the get-together brings back some good memories.

"I always had a lot of fun with these guys," he said. It's great getting after these guys. It's been just a great experience for all of us to get back here."

"I'm not real sure what our record was back then," he said, "but we won't have any defeats from this get-together."