From the archive: Area ties to the Jesse James legend

I’ve always had an interest in the stories of Missouri’s Civil War guerrillas, including Jesse and Frank James. This article takes the James story a step further with a discussion of Jesse’s killer, Bob Ford. 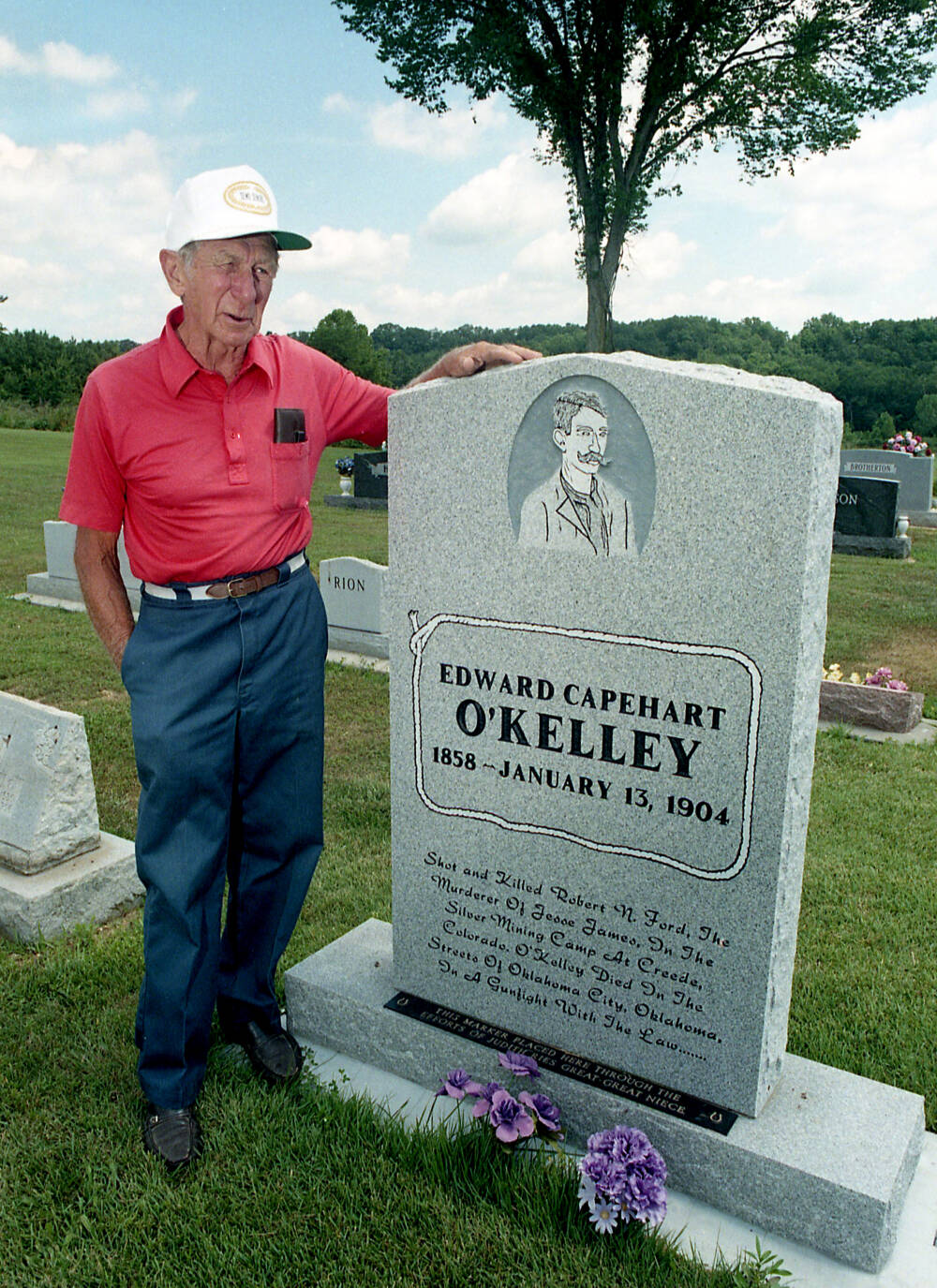 John Knowles stands by the historical marker in the Patton Cemetery that acknowledges his great-uncle, Ed O'Kelley, as the man who killed Bob Ford, the murderer of outlaw Jesse James, in a Colorado mining town in 1892. (FRED LYNCH ~ Southeast Missourian archive)

PATTON -- Scientists can study whether the man in a Kearney, Mo., grave was really Jesse James if they want, but John Knowles of Patton believes he already knows the answer.

"It's Jesse. At least I believe it is," said Knowles, whose great-uncle, Ed O'Kelley, murdered the man who 10 years earlier had murdered Jesse James.

His name was Bob Ford.

The Jesse James legacy is part of Patton's history, largely due to the O'Kelley connection.

Knowles' daughter, Judy Ries, recently published a book about Ed O'Kelley. She will be speaking at the James-Younger Gang Conference in Kentucky this September. Sharing the bill with Ries is James E. Starrs, the lead scientist in the exhumation at Kearney.

Starrs and a team of researchers spent 2Ø days in Kearney earlier this week digging up the bones of the man believed to be Jesse James. Scientists now face the painstaking laboratory analysis of the bones.

They hope to compare DNA from the bones to DNA from James' known living descendants, settling the question of whether the bank and train robber really was killed in 1882 and buried in northwest Missouri.

Some people claim James faked his death, and fathered more children before dying at the age of 107. James was 35 years old when Bob Ford reportedly shot him.

As the story goes, Jesse James, an outlaw on the run calling himself Thomas Howard, was standing on a chair while hanging a picture in his home in St. Joseph.

Bob Ford, who rode with the James Gang, was visiting Jesse that day in April 1882. There was a reward for Jesse and Ford needed money. He drew his six-shooter and shot Jesse dead.

A song based on Jesse James folklore refers to Ford as "The dirty little coward that shot Mr. Howard and laid poor Jesse in his grave."

O'Kelley was buried in a pauper's grave near Oklahoma City following his death in a shoot-out with police 90 years ago. But his family in Patton hasn't forgotten him. In September, a large historical marker was placed in the Patton Cemetery.

The marker doesn't extol O'Kelley's virtues -- apparently there were none. For the most part he was a drifter, a drunkard and a murderer. The marker notes the dastardly deed he is most famous for.

Since then, O'Kelley has been a respected name in Patton, and Knowles said his cousins weren't pleased at the notion of reminding folks about Ed O'Kelley with a cemetery marker.

But Knowles and his daughter said history is history, and they aren't ashamed of their notorious relative.

"People lived rough back then," Knowles said. "If you weren't rough, you didn't survive."

Knowles said his grandfather and father often talked about Jesse James and his visits to Patton.

Ed O'Kelley was raised in Patton. Family lore says he rode with the James Gang and the gang occasionally traveled through the Patton area and even camped "over there in the valley," Knowles said.

"My dad says my grandfather saw the gang ride right down the street in Patton," Knowles said. Patton has just one street.

Ries said her research reflects that the Patton visits are possible. The gang was committing robberies in Ste. Genevieve and Gads Hill at the time.

That is not the end of the Bollinger County connection to the James Gang. In Lower Grassy Cemetery lie the bones of 19-year-old Franklin James, the victim of his parents' unfortunate choice of names.

He was shot to death by Pinkerton detectives who mistook him for Frank James, outlaw brother of Jesse James.

Pinkerton detectives stood guard at the Kearney cemetery as the body was exhumed this week.