From the archive: A look at Smelterville, Part 1

I grew up on South Sprigg Street in Cape Girardeau, on the top of Tollgate Hill. Our house was about two blocks north of Smelterville.

In a two-part series published in 1993, Sam Blackwell explained the Smelterville community and examined it's history.

Published July 8, 1993, in the Southeast Missourian 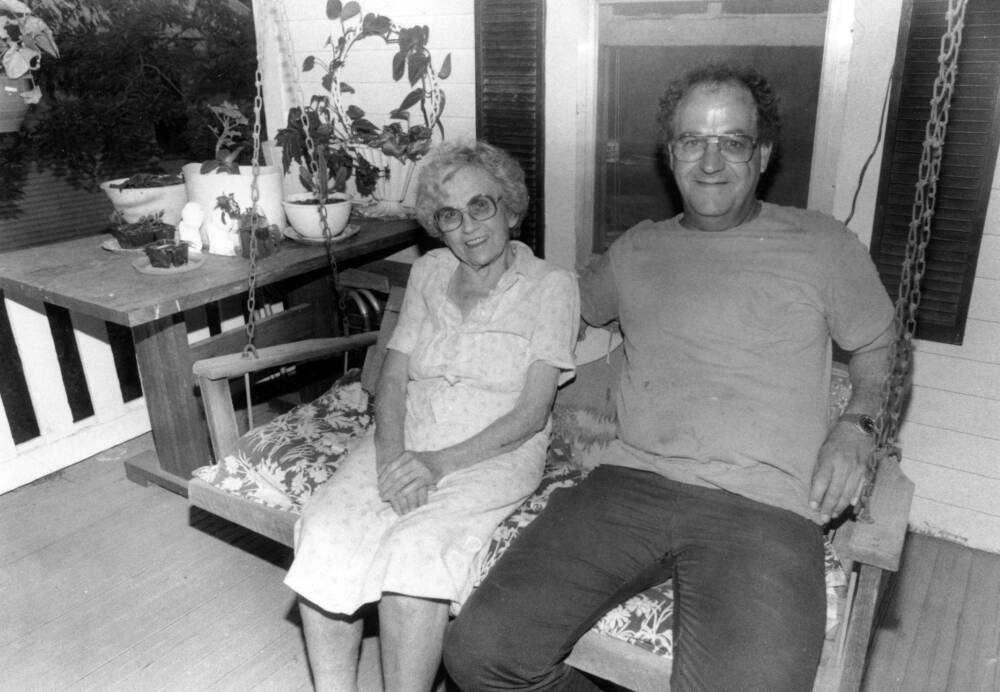 Ethel May, who now lives on Giboney Street, raised 14 children -- not all of them her own-- mostly by herself in Smelterville. With her is a son, Charles Howard. (MELINA A. MARA ~ Southeast Missourian archive)

Welcome to Smelterville, former home of industries, mom and pop grocery stores, a tavern, churches, a bait shop, a popular barbecue restaurant, a brothel and many of Cape Girardeau's poorest people.

Today, most people know this small strip of land east of South Sprigg Street simply as South Cape. The stores and most of the industries are gone, and the population might be less than 50 people.

But in 1950, an estimated 700 people (the total population of Cape Girardeau was 21,000) were defiantly proud to call Smelterville home.

Along South Sprigg Street, the ting, ting of soda-cap ballgames could be heard all summer long behind Dietiker's Store. And the carhop at the Blue Hole restaurant took orders for barbecue sandwiches and chocolate milk without writing them down. Across the railroad tracks to the east lived independent-minded people who might have paid $400 for their wood, tarpaper and cardboard piece of the American dream set on a road that would never be paved. They knew their neighbors well -- everybody eventually met everybody else at the town pump, the community's single source of water.

By that time, everything east of South Sprigg between Highway 74 and Cape LaCroix Creek was known to most as Smelterville. In earlier years the land east of the Frisco Railroad tracks was called Leadville. The area between LaCruz and Boundary streets was known as the Village of Girardeau, which was owned by the Houck family, and the only one of the three communities properly laid out.

Through the years these distinctions faded, especially after all three communities were annexed by the city in 1925.

Charles Howard, a former resident of the area east of the railroad tracks, says of the land west of the tracks: "We didn't consider this Smelterville. We considered these people influential. They had inside bathrooms."

Now, Smelterville itself is just a memory to most. 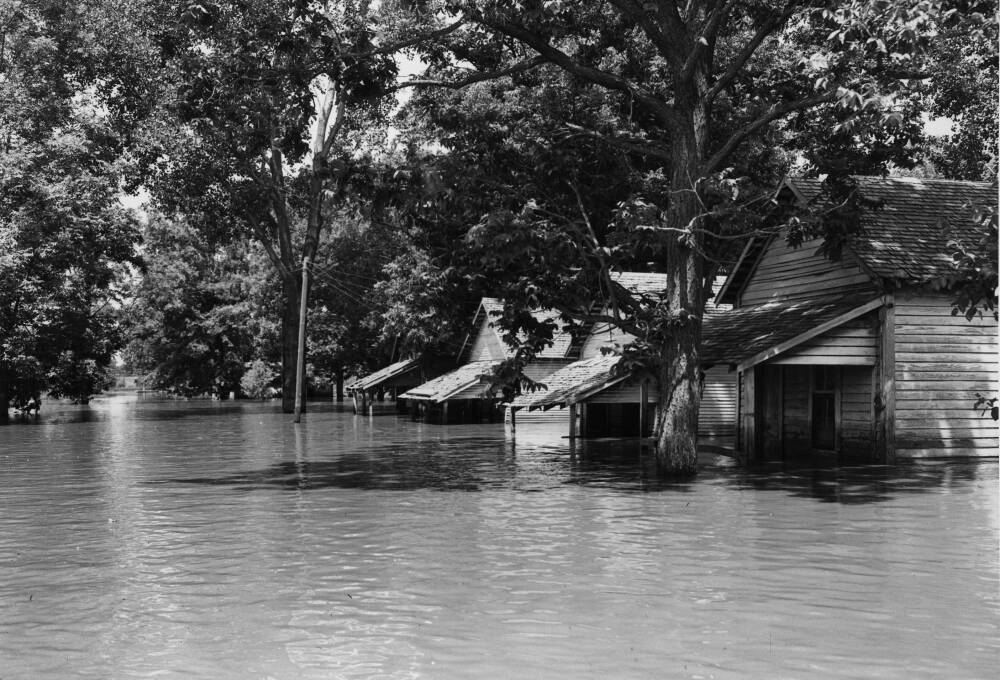 This is a view of a row of houses on Pecan Street between the railroad tracks and river, taken during the flood of 1951. Water nearly touched the roofs of the porches. (G.D. Fronabarger ~ Southeast Missourian archive)

How long Smelterville existed is difficult to say, but it certainly dates to the beginning of the century. Its name, and that of Leadville, derives from the smeltering plant -- meant to service the lead mines to the north -- that was at least partially built by 1908 but might never have operated. By 1919, the company was dissolved.

Since then, cheap land and cheaper rents -- 99-year leases at $5 per year were common in the former Village of Girardeau -- kept people in Smelterville despite the lack of water and toilets, the generally poor construction of the houses (many had dirt floors and a single heat source), and the chance every spring that it all could wash away in a Mississippi River flood.

The community of black and white people lived peaceably here side by side, their survival linked to each other and the whims of the river. They shared a water supply, sometimes outdoor privies, and often food.

"Nobody ever stole anything from anybody." Except maybe a kid-size tidbit from the gardens everybody raised. "But nobody minded," he said.

Howard's mother, Ethel May, moved to Smelterville in 1930 and raised 14 children -- six of them belonged to sisters and three were stepchildren -- here, most of them by herself after her first husband died in 1947. To make money, she killed chickens, picked cotton and cleaned houses.

"I would bring home four of the biggest fryers, I'd cook them and there wouldn't be a bone left," she said.

May, who now lives on Giboney Street north of the old Smelterville area, took in one neighbor child whose mother said she couldn't care for him any more. The woman returned three years later to reclaim him.

"Some of them I fed were neighbors' kids. They didn't have nothing," May said. "I would make sure their hands were clean. Sometimes there wasn't much food left."

The family didn't have running water or indoor toilets, sometimes the gravy was thin, and sometimes they'd awake to find snow on their blankets. But they didn't think twice about it.

"We were happy and we had love," May says.

Her kids grew up patched and clean, and able to take care of themselves.

"We were meaner than junk yard dogs," Howard said. "I would get a whipping at school from Miss Alma Schrader and another one when I got home."

"I'm proud I raised my children down there," his mother said. "Every one of them had good jobs."

When the house flooded, as it did about every other year, they'd move into a tent in the Giboney Woods until the waters began to drop. "We'd try to get in there just as the river was receding so we could use the river water to wash it," Howard said.

They moved away in 1962, the river wearing away their resolve to stay. "The house was getting so bad ... we had poles sticking on one end to keep it from falling over," he said.

Others, including most of the businesses, eventually began leaving as well. Kasten Concrete Products and Consolidated Grain and Barge still are here next to the river.

Most of the stores extended credit to their customers, and many saved their soda caps for the ballgames that inevitably developed behind the stores.

Former residents say the late Jake Kitchen, an uncle of current Central High Athletic Director Terry Kitchen, was one of the best soda-cap ballplayers around.

On the east side of the tracks, a madam operated a house of prostitution that reportedly thrived for decades during the middle part of the century.

Said Howard: "She had a bunch of girls working for her. Guys used to come from town in big fancy cars."

He's sure the police were aware of the activity. "Everybody down here knew about it." 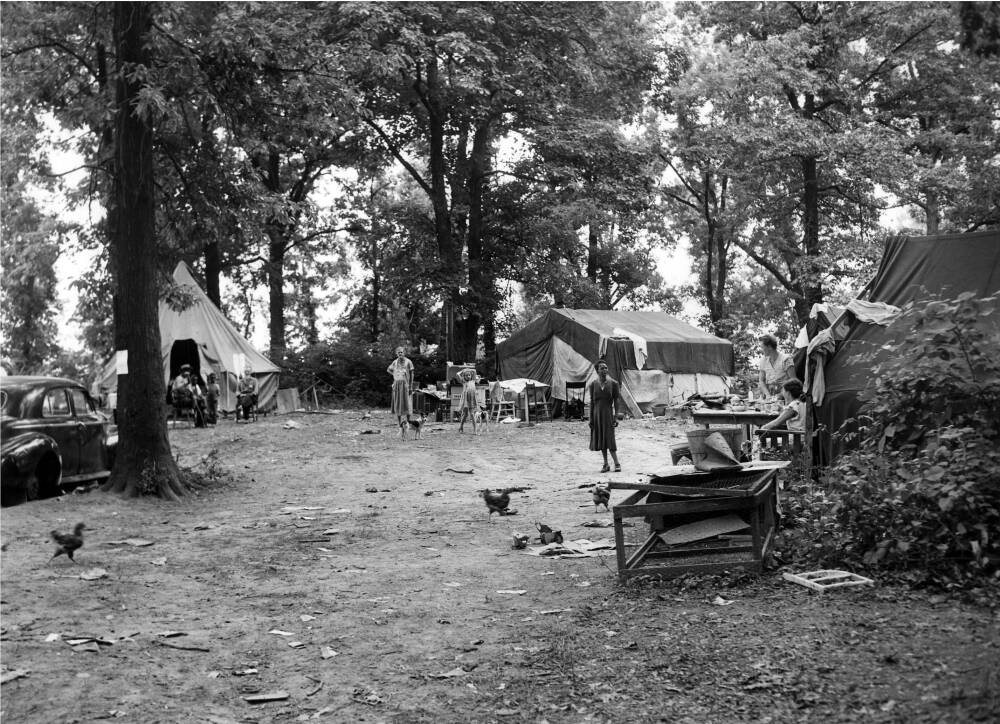 When high waters flooded the Smelterville area in the summer of 1951, more than half a dozen families moved into a tent city in Houck Woods (also known as Giboney Woods), above. Flies and mosquitoes from the dense woods made living conditions unbearable for those fleeing the flood waters. The rising waters drove out some 150 families during July of 1951. (G.D. Fronabarger ~ Southeast Missourian archive)

During the frequent floods, which have become more severe as the century has progressed, the residents found various places to stay. Many put up tents in the area known as Giboney Woods above the Highway 74 and Sprigg Street intersection.

Sometimes the city housed them at Ford D, the former Civil War battlement, or at the Arena Building. But people who lived in Smelterville say they received and expected little from the city through the years.

"The city never came over there," Howard said. "You just fended for yourself. I think it was because the people over there were so damn independent."

Next: Amid days of debate over substandard housing, the city moves to tear down many of the deteriorating houses in Smelterville, and the river takes care of the rest.