From the archive: Artist Mark Farmer is a master builder

The artwork on the walls of my home reflect my personal tastes: Local artists and history. Along with paintings I treasure by Marjorie Suedekum and the late Joey Sebek, are several drawings by Mark Farmer.

Here's a story the Southeast Missourian published about Mark on June 6, 1993. 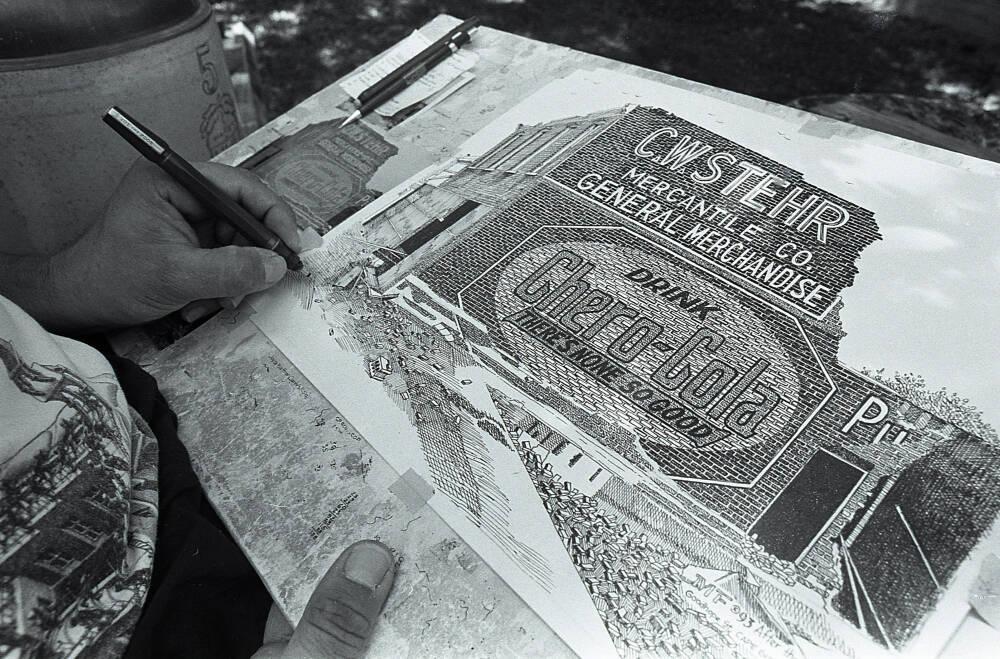 Mark Farmer captures a large advertisement for the C.W. Stehr Mercantile Co., and Chero-Cola during the demolition of the former Orpheum Theater in the 600 block of Good Hope Street in May 1993. (Fred Lynch ~ Southeast Missourian archive)

In many ways, the Cape Girardeau artist is a master builder - constructing visual images of the city's architectural heritage.

Over the years, he has done hundreds of drawings - mostly of Cape Girardeau's venerable buildings, primarily homes such as the Victorian-era Glenn House and the Harrison house with its wrap-around white porch.

Farmer has a love for old buildings and their history. "I am an artist but I also am kind of an amateur historian," he says.

Through his artwork, Farmer hopes he has prompted people to take a second look at Cape Girardeau's historic buildings. "I really probably made converts of some people who weren't really predisposed to local history," he says.

Farmer's drawings also have served as visual reminders of buildings that have been torn down. "I've drawn some buildings that are no longer there. It's sad that they're gone, but at least there's some record of them being there."

The 42-year-old Farmer, who grew up in Kennett, says he has always had a desire to draw.

As a child he remembers sitting down and sketching. In those days, the images he put on paper were "streamlined vehicles like jets, ski boats and race cars."

His parents encouraged him, perhaps at least partly because it wasn't a noisy pastime. "Drawing is sort of a quiet thing to do. I would just sit down and sketch."

Farmer says his drawing took a back seat to other activities in junior-high and high school. But he returned to drawing when he attended Southeast Missouri State University and majored in both art and drafting. He graduated in spring 1974. 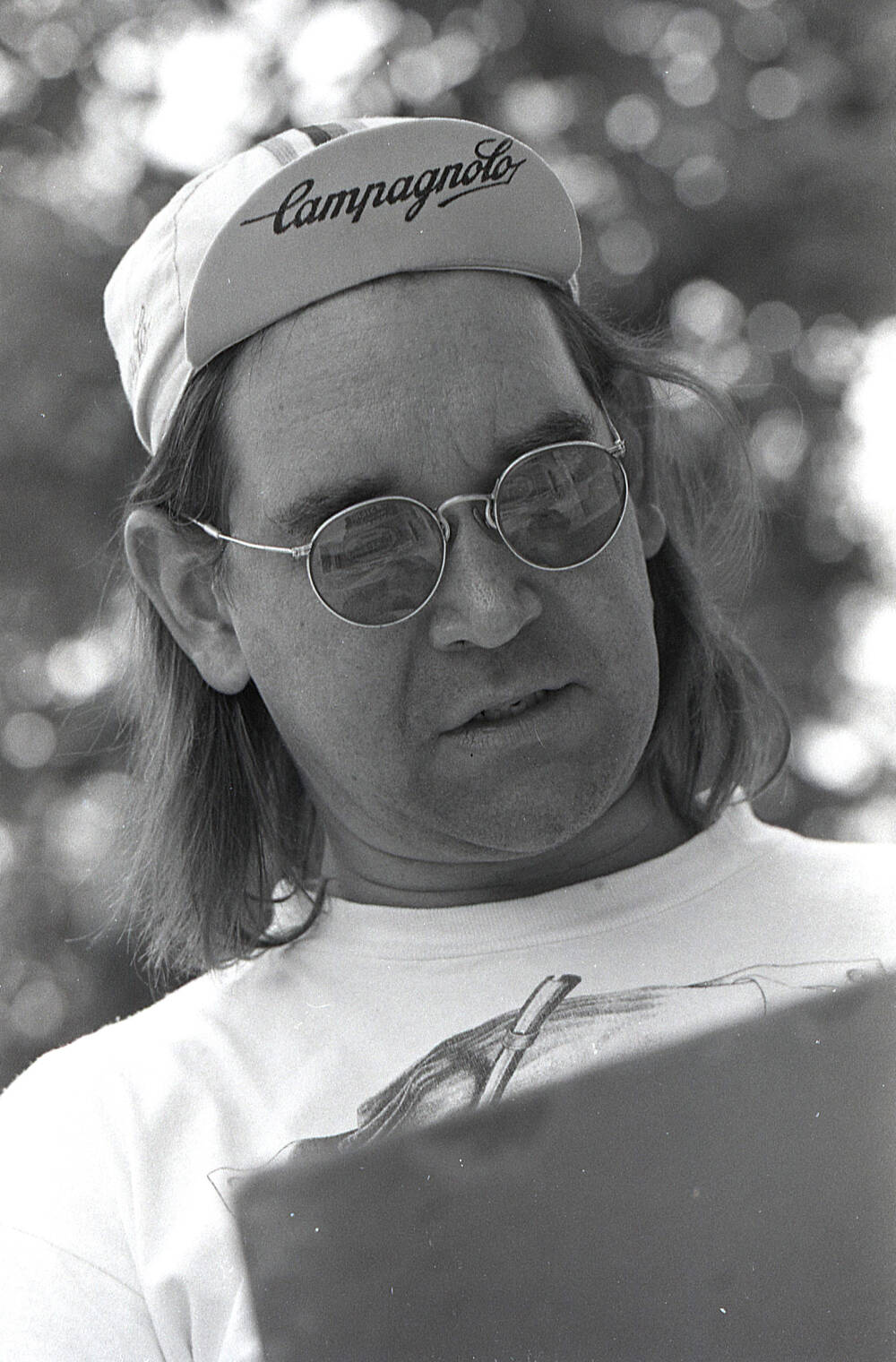 Farmer believes that drafting experience has aided him in what he calls the "calculated realism" of his artwork.

In college art classes, he often made drawings of the houses in the neighborhoods surrounding the campus, instilling a love for the majesty of buildings that has blossomed into a career.

After college he held a succession of drawing-related jobs both in Jonesboro, Arkansas, and Cape Girardeau. He returned to Cape Girardeau in 1976, and he continued to draw as a hobby. But as his reputation grew, so did his drawing business: he has been a full-time artist since 1980.

"It wasn't a master plan for myself; it was a hobby that just got out of hand," he says.

A bachelor, Farmer doubts he could remain a full-time artist if he were married. "I'm virtually married to my profession," he observes.

"The first prints I made, I sold for $2 to my friends," he recalls.

Prints, he says, make his work more affordable. "My work is sort of artwork for the common people," he says.

For the past 10 or 11 years, Farmer has lived in a small house at 603 S. Benton. But this summer he expects to move to new quarters. His Benton Street home and others around it are in the path of the new Mississippi River bridge route.

Already, many of the surrounding homes are boarded up, wrapped up in yellow tape with the message "Do Not Enter" repeated along its length.

Farmer says he'd like to live in an old house someday, which could also double as a studio and gallery.

He admires those who spend the time and effort to restore old homes. But he says, "I'd rather restore them on paper."

A number of his drawings adorn the walls of his home. In one crowded corner sits a drawing board, which he uses for large drawings.

But most of the time he prefers to work on a lap board while sitting in a padded rocking chair. He normally draws on 11 1/2-by-14 1/2-inch white paper, using photographs of his subjects as guides.

"I use photographs because I can freeze time, shadows and composition," explains Farmer.

He often does preliminary sketches on site. His sketches begin with pencil lines. "Because ink is so unforgiving, I really do a lot of pencil preliminary lines," he says.

One drawing can take 25 hours of work on average. Rarely a day goes by that Farmer doesn't spend some time drawing.

"When I'm not doing drawings for people, I draw things I want to have in my portfolio," he said, continuing to work on an illustration of the C.W. Stehr Mercantile Co. building. The drawing depicts the aging, brick building on Good Hope as it appeared shortly before being torn down this spring.

The old Orpheum Theater - which was adjacent to the Stehr structure - had been torn down, exposing an advertisement for "Chero-Cola" painted on the exterior wall of the mercantile building.

Such advertising on commercial buildings interests Farmer. An old (Chero)-Cola sign on an exterior wall of the Port Cape Girardeau Restaurant - a former riverfront warehouse - attracted Farmer's attention. He ended up drawing the building.

"If the sign hadn't been there, I probably wouldn't have been as interested in doing it," he says.

Farmer says his most unusual subject was a Jackson used-car lot. The drawing was commissioned as a gift to the retiring partner in the car dealership.

Some of his most popular drawings are those of the Delta Queen steamboat and the historic Burfordville Mill.

"I've done some water colors. I really started out drawing with pencil and paper," he says. But he soon switched to pen and ink. "It's just a more finished and permanent form of drawing," he explains.

Farmer's drawings are images in black and white, which bring the architectural details into sharp focus.

"It forces the viewer to concentrate on the contrast, the composition," says Farmer. "It allows you to focus on the details."

When he's not drawing, Farmer can often be found bicycling. He's a member of the Velo Girardeau Bicycle Club. "I ride as much as I possibly can," he says.

Last year he rode on average 160 miles a week, often traveling through the countryside. Barns and farmhouses have become subjects of drawings because of such bike trips, he says.

Bike riding allows one time to view the scenery. "You get more time to absorb things," says Farmer.

His interest in bicycles - he has three including one used for spare parts - has spilled over into his artwork. "I've drawn all of my bicycles at least once," says Farmer.

For now, Farmer keeps pedaling along. Line by black line, his detailed images of the city continue to take shape.