From the archive: Pocahontas, the town, not the movie

Its popularity prompted two articles in the Southeast Missourian on Sunday, June 18, 1995, about the real life community of Pocahontas, Missouri. 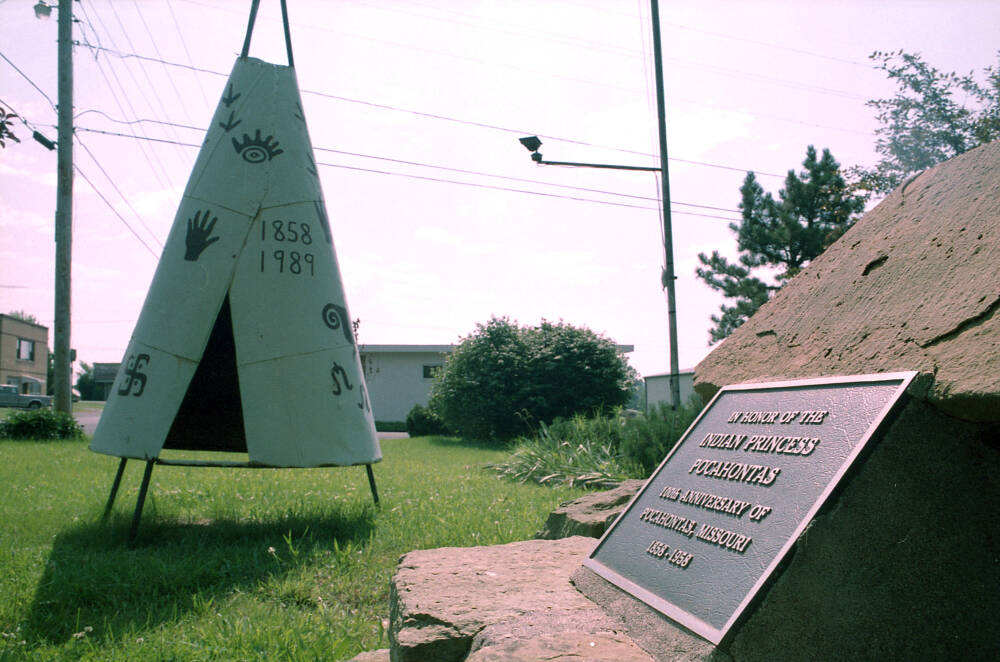 Pocahontas, Mo., a small town in northern Cape Girardeau county, is named after the Indian princess. A tepee and plaque sit in the center of the town, commemorating its 100th anniversary in 1958. (LOU PEUKERT ~ Southeast Missourian archive)

But the Disney movie, with its cast of characters from Indian heroine Pocahontas to Jamestown, Va., settler John Smith, will be seen almost everywhere else. The movie opened in six cities, including St. Louis this weekend and will be in movie theaters nationwide in the coming week.

The film is already being marketed to the hilt with a record amount of tie-in merchandise. In all, major corporations will spend $125 million on everything from books to moccasins, and sheets to toothbrushes.

But if you visit the town of Pocahontas, situated nine miles north of Jackson on Highway C, you won't find "Pocahontas" merchandise in shop windows.

In part, that's because there are only a handful of businesses: an insurance office, feed mill, tool and bait shop, restaurant and a meat processing plant.

But at one time it boasted a number of businesses, including three grocery stores, a lumber yard, a doctor's office, a harness shop and shoe repair, two blacksmith shops, two creameries, a car dealership, a funeral service, telephone switchboard, a band and a barbershop.

"I don't think we have ever had a movie theater here," said Marjorie Swan, a longtime resident and the town's unofficial historian.

Swan doesn't have any young grandchildren. But that doesn't matter when it comes to the movie "Pocahontas."

"I will probably go see it," Swan said, although she conceded the town has little to do with the 17th century Indian princess.

The town was named for the famed Indian princess, but only because it was an Indian name townspeople could spell and pronounce, Swan said.

Samuel Green established a trading post in the area in the early 1850s. It was called "Green's Station."

The Shawnee Indians had a large encampment two miles to the north of the current townsite.

Green fell in love with a beautiful, dark-eyed Shawnee Indian princess. But she and her tribe moved away.

Green wanted to name the town after her, but the pronunciation and spelling proved too difficult.

"He could hardly say it, much less spell it," Swan said.

So around 1858, he named the town after Pocahontas, an Indian name that was familiar to the settlers, most of whom had come from Virginia and North Carolina.

These days, the only visible symbol of Pocahontas is in the postage-stamp size city park, which stands virtually in the shadows of the large mill.

A metal tepee, painted white with Indian markings and a plaque mounted on a stone base pay tribute to Pocahontas. They were erected in 1958 during the town's centennial.

Across the street is a tiny post office. Red, white, yellow and purple butterfly decals decorate the large window that lets light into the closet-size lobby and the small office situated behind the counter.

Verna Kieninger has been a part-time clerk at the post office for 20 years.

She delivers a broad smile when asked about the highly publicized Disney movie.

"I promised my grandkids we would get the tape as soon as possible," she said.

The Cape Girardeau County town isn't the only community to be named after the Indian princess. Kieninger said she knows of at least three others in Illinois, Arkansas and Iowa.

Mail for those communities sometimes ends up in Pocahontas, Kieninger said.

Pocahontas Lumber still uses an Indian maiden logo, but the lumber and hardware store moved to Jackson in 1965.

The logo actually was sort of an afterthought. Pocahontas Lumber manager Earl Saupe said the Indian maiden was created by Southwestern Bell for the hardware store's Yellow Pages ad.

All the Disney hype means little to Jeannie Hanners, who sells tools and bait at Hanners Handy Tools store. The business is in a white-painted concrete block building, just down the street from the tepee.

Hanners said she is too busy to drive to Cape Girardeau to see a movie, even one named "Pocahontas."

Still, townsfolk here have a lot of pride. They like their quiet town just the way it is, even if it doesn't sell "Pocahontas" movie merchandise.

"Disney plays fast and loose with history to weave a good story," B. Gene Ramsey said.

The animated movie deals with the Indian princess, who allegedly saved the life of Jamestown settler John Smith in 1607.

Pocahontas, which means "playful one," was the daughter of Chief Powhatan. He reportedly was about to kill Smith with a stone war club when Pocahontas intervened.

In his writings, Smith recounted that Pocahontas placed her head upon his and begged her father to spare him.

Fortunately, for legend and Disney, Powhatan gave in.

Whether Smith and Pocahontas ever met, is a subject of debate among historians.

But Ramsey said killing an enemy with a war club was a common practice among Indians.

Smith's account of the incident could be true, although even some of Smith's contemporaries questioned the story, Ramsey said.

But the Disney movie takes the story a step further, turning it into a colonial Romeo and Juliet.

Ramsey said there is no evidence Pocahontas and John Smith were ever in love. "Romeo and Juliet, that sounds like pure Disney."

By most accounts, Smith was 27 and Pocahontas, 12, when the two reportedly met. In the movie, both look about 17.

In fact, Smith may have kidnapped Pocahontas and kept her prisoner to keep Chief Powhatan in line, Ramsey said.

The settlers would have had no trouble noticing her. "She did cartwheels naked down the middle of the street. She really entertained the early settlers," Ramsey said.

Around 1613, she fell in love with settler John Rolfe, who helped develop the tobacco industry in America. She became a Christian and was baptized as Rebecca.

In 1614, Pocahontas married Rolfe and traveled with him to London in 1616 to raise funds for the struggling Virginia colonists.

While there, she died of smallpox.

While the movie may be more a fairy tale than history, Ramsey said "Pocahontas" probably will encourage more Americans to take an interest in Indian history.
It also should be entertaining.

"I hope it is a good romance," Ramsey said.