From the archive: Cape doctor challenged the Mississippi

Beginning in 1954, Cape Girardeau physician Fred Rawlins swam the Mississippi River, from the Illinois side to Cape Girardeau, at least once a year. That tradition continued until 1999, the year before he died. 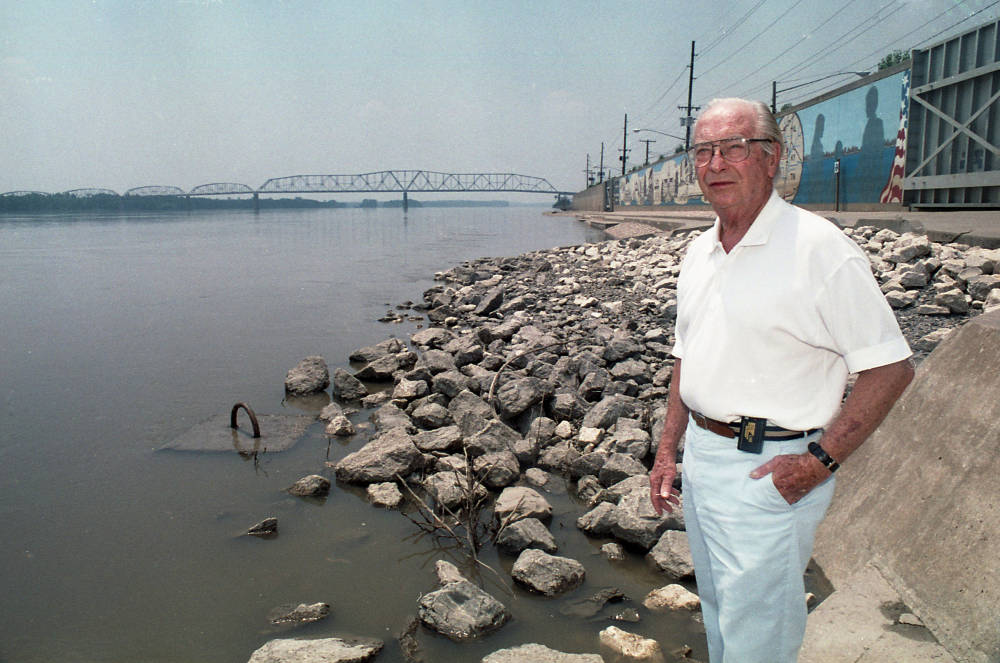 THE MIGHTY MISSISSIPPI NO PROBLEM FOR RAWLINS

When the flood waters rise, you see a lot of unusual objects scurrying down the Mississippi River as anything not tied down goes downstream.

Appliances, tires, a 79-year-old man, cars and entire trees are just a few objects which can sometimes be seen.

If anyone viewed the Mississippi River the evening of June 17, they would have done a double take as a swimmer, accompanied by a boat, made his way from the Illinois side to Cape Girardeau, south f the bridge.

No this was no Evil Knievel in Speedos. This was even more daring. This was 79-year-old Dr. Fred Rawlins, who was performing his annual swim which he started in 1954.

Rawlins was less concerned with the 38.3-foot flood level stage as other obstacles.

"You had to watch for barges," said Rawlins, who noted that barge traffic had once again been allowed to flow.

He did admit the task did entail a little more danger than normal.

"It was a little bit (dangerous) this time," said Rawlins. "The current was so swift. If you have a boat with you, there's not too much to worry about."

Friend Carolyn Miller manned the vessel as Rawlins made his way across, finishing farther south than his intended target, Cape's seawall.

Touching bottom on the Illinois side, he started at 6:58 p.m. and reached the Missouri side at 7:24 p.m. a quarter mile south of the bridge.

He performs all his extensive river swimming without a life preserver, and for good reason.

When he started his ritual in 1954, he performed the feat without swim vest or boat.

There have been occasions when he hasn't swum across, but found a challenging substitute. Rawlins said that because of the Flood of '93, he swam down to Thebes, about 12 miles down river.

He has no special date when he performs the Mississippi crossing, but usually tries to stay away from mid to late summer when the water level is lower. He doesn't want to be accused of wading across.

"If you're going to do it, do it right," said Rawlins.

Rawlins, an obstetrician/gynecologist, and his late wife Lillian Catheryn had four children -- two daughters and two sons. Three of the children have also accomplished the river-crossing feat.

Rawlins is a 1934 graduate of Cape Girardeau Central High School and has always been an avid swimmer. Central had no swim team when Rawlins attended, but Rawlins has been able to find other worthy opponents other than "Old Man River" later in life.

He recently competed in the Senior Olympics in San Antonio, Texas, in four events. It marked his fourth trip to the nationals.

Having to race against some spry 75-yhear-old rookies in his 75-79 class, Rawlins' top finish at nationals was a seventh in the 400 meters.

"Not too many can last a quarter mile," noted Rawlins of his best event.

He placed first in all his events in the regional qualifying meet in Poplar Bluff.

Rawlins is not only active athletically, he still continues to work 40 hours a week. While he no longer delivers babies -- he stopped in 1994 -- he claims to have delivered 8,000-10,000 newborns into the world.

As for his swimming, there appears to be no plans for slowing down. He swims three mornings a week at the Cape Central pool.

"I plan to keep plugging along at least to the end of the century, hopefully," said Rawlins.