From the archive: Museum honored the Golden Troopers

In June 1993 the River Heritage Museum opened a new display honoring the Golden Troopers, the drum and bugle corps of the Louis K. Juden Post of the American Legion in Cape Girardeau. The museum at Independence and Frederick streets kicked things off with a reception for the remaining Troopers and their families.

In announcing the festivities, the Southeast Missourian's Sam Blackwell wrote an article outlining some of the musical outfit's illustrious history. 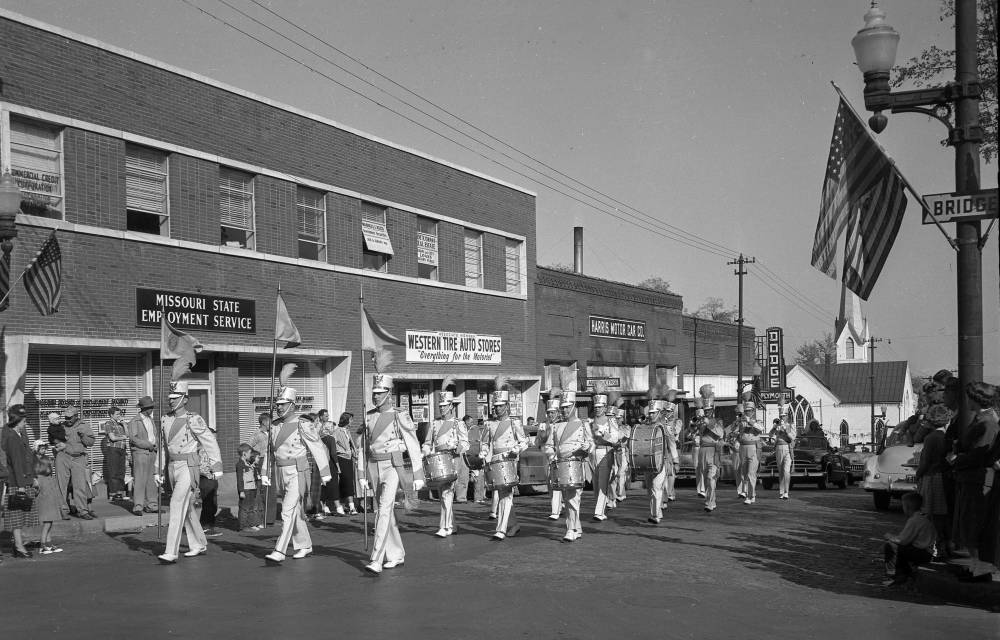 From the end of the 1920s until they disbanded in the mid-'50s (with a few years off for World War II), the Golden Troopers of Cape Girardeau ranked among the nation's finest drum and bugle corps.

Named for their gold-colored uniforms, they won the Missouri American Legion drum and bugle corps championship eight times, and often placed high in national contests, with a best finish of fifth in Los Angeles in 1950.

Returning by train from state and national competitions, they were greeted by throngs of proud citizens, many of whom had donated money to help send the men to Miami, New York, Los Angeles, Cleveland and elsewhere for contests. These same people often flocked to Houck Stadium just to watch the Golden Troopers practice.

A display of Golden Troopers memorabilia - including photographs, drums and uniforms - will be exhibited beginning Sunday at the River Heritage Museum, Frederick and Independence streets. A reception for the remaining members and their families will be held from 2-4 p.m. Sunday at the museum.

Though there were a few holdovers, the Golden Troopers, sponsored by the Louis K. Juden American Legion post, generally were divided into pre-World War II and post-World War II groups. The former were driven through their paces by Dr. J.H. Ruff. After the Golden Troopers finished 19th among 87 corps at the New York Legion convention in 1937, the organization's longtime drum major remarked, "We are tired, but we did our very best, as we always have done."

"I enjoyed every bit of it," he said. "I liked being able to perform for the public."

Creighton, who was in the Signal Corps during World War II, played a bugle in the Golden Troopers. "I enjoyed every bit of it," he said. "I liked being able to perform for the public.

For many, the Golden Troopers was a carryover from their war experience.

"The whole rhythm of it was the big element," Creighton said. "When you do military marching you get used to that marching."

They say participation in the Golden Troopers demanded some musical training and lots of dedication. The Aug. 2, 1949, issue of the Southeast Missourian carried a photo of the corps practicing at Houck Stadium at 7 a.m. on a Sunday morning.

Hal Lehman, who retired as business manager of the Cape Girardeau public schools in 1980, played a tenor drum in the Golden Troopers and later became a "guide-on," a non-playing member.

The judging at the state and national level was very demanding. If a five-minute drill was finished in four minutes, 44 seconds, that meant the corps' cadence was off and cost them points. Uniforms also were scrutinized for the slightest aberration. The wisp of a feather blown from a plume onto a sleeve was worth a penalty.

"They inspected you a lot worse than they ever inspected you in the Army," he said. "They really went over you with a fine-toothed comb."

One year the Golden Troopers lost the state contest when one of the members stepped out of bounds.

Like Creighton, Lehman said his Golden Trooper days were good ones. "It was worth a million dollars. I wouldn't have given anything for it."

He remembers walking down the centerline during a parade in New York City. He also recalls the year - it was 1953 - that the Golden Warriors invited some of the best corps around to Houck Stadium for a "dream contest."

The stadium was almost sold out. "It was a beautiful evening," Lehman said. "They were perfection."

The Golden Troopers did not compete themselves. "The object was to show the people of Cape Girardeau what we were up against," said Lehman. He recounted that many of these drum and bugle corps were filled with top musicians paid by company sponsors.

The all-volunteer Golden Troopers "never were able to reach the point of perfection they did," Lehman said.

The Golden Troopers finally disbanded in 1954 or 1955, no one seems sure. "We just ran out of steam," Lehman said. "We had marched thousands of miles.... We had other things to do."

Paul Anderson, a retired mail carrier, remembers that he didn't get to go to the national contests with the corps in 1952 and 1953 because he was called to the Korean Conflict.

Some of the Golden Troopers were good musicians and some had to learn their instruments, Anderson said. He remembers Elmore Kassel trying to instruct a number of men in how to play the single-valve bugle.

Anderson, who had played trombone in high school, says, "The one-valve bugle is quite different from a trombone."

The Golden Troopers were all about camaraderie anyway, Anderson said.

"Regretfully, a lot of those guys are gone."

Other known members of the Golden Troopers who are still in the Cape Girardeau area include Freck Shivelbine, Frank Stuart, Tom Sawyer and Bob Harper.