From the archive: A Father's Day memory

This Father's Day feature was published in the Southeast Missourian on June 18, 1995. 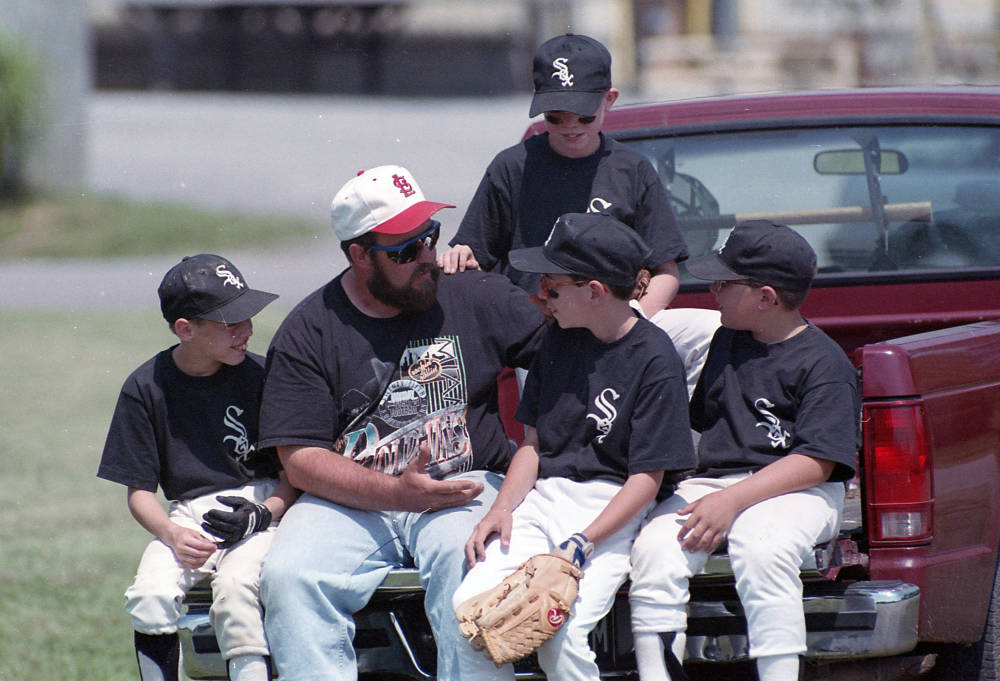 Clark Daniels, second from left, spent time before his sons' ball game to offer a little pre-game pep talk to the four at Arena Park Saturday. Daniels, like many fathers across the country , will be celebrating Father's Day today, relaxing with families. Daniels' sons are, from left, Darin, Derick (behind), Jeff and Matt. (Chris Stanfield ~ Southeast Missourian archive)

Clark Daniels is doing his best to make sure his sons and stepsons never know the void he experienced while playing sports as a child in Scott City.

"My dad was a good father, but he never really got that excited about sports, so we didn't have that kind of connection," Daniels said after his son, Matt, and stepson, Darrin Teague, helped the White Sox post a 14-9 Little League victory over the Orioles at Capaha Park Saturday afternoon.

"I guess you always look for something to give your kids that you didn't have when you were growing up," said Daniels, 35, who works at the Cape Memorial Cemetery.

Daniels played Little League baseball and later competed on the gridiron for Scott City High School. However, the sports bond his friends enjoyed with their fathers never was part of his rite of passage to manhood.

"I pretty much played sports because I liked it so much, but I get a bigger kick out of it when I see my kids go out there and play," he said. "I didn't really push them into it, but when I saw that they liked it I wanted to support them as much as I could."

He tells his children what a great deal they're getting, "but I don't know if they believe me or not."

In just a few hours Daniels would be heading to Arena Park with his 12-year-old son, Jeffrey, and other stepson, Derick, 12, for another Little League game.

"This will be our eighth game in six days if you count my softball schedule with the Little League," Daniels of Cape Girardeau said. "But I don't mind the hectic schedule because it's so much fun."

When he isn't at games, he is int the back yard playing catch or batting at the batting cage working on their hitting.

Both Matt and Darrin said the extra work they have put in with their dad has paid off during the early portion of the season.

"I think it's made me a better pitcher," Darrin said. "It's helped me a lot when I play in the outfield," Matt said.

The boys get their share of hits, Clark said.

Matt's favorite major league player is Frank Thomas of the Chicago White Sox. "He wears the Big Hurt's number," Clark said, pointing to his son's back and number 35.

"I don't know what it is about the White Sox, but we seem to like to watch them on television more than any other team," Clark said.

Although they are avid Cowboys and 49ers football fans, Clark said he anticipates a few treks to St. Louis to see the Rams play.

"Yeah, Jerome Bettis is one of my favorite backs," he said.

They collect baseball and football cards and attend an occasional St. Louis Cardinals' games when their schedule allows.

So what do his children plan for Father's Day? "I guess we'll let him sleep in and then make his breakfast," Derick said. And then they'll pound their fists into their gloves until dad gets the hint that it's time to play some catch in the back yard.