From the archive: The thrill of tandem skydiving

I've always thought I'd like to try skydiving. But, alas, I'm too old and too much of a chicken to take up the sport...

Published April 22, 1991, in the Southeast Missourian: 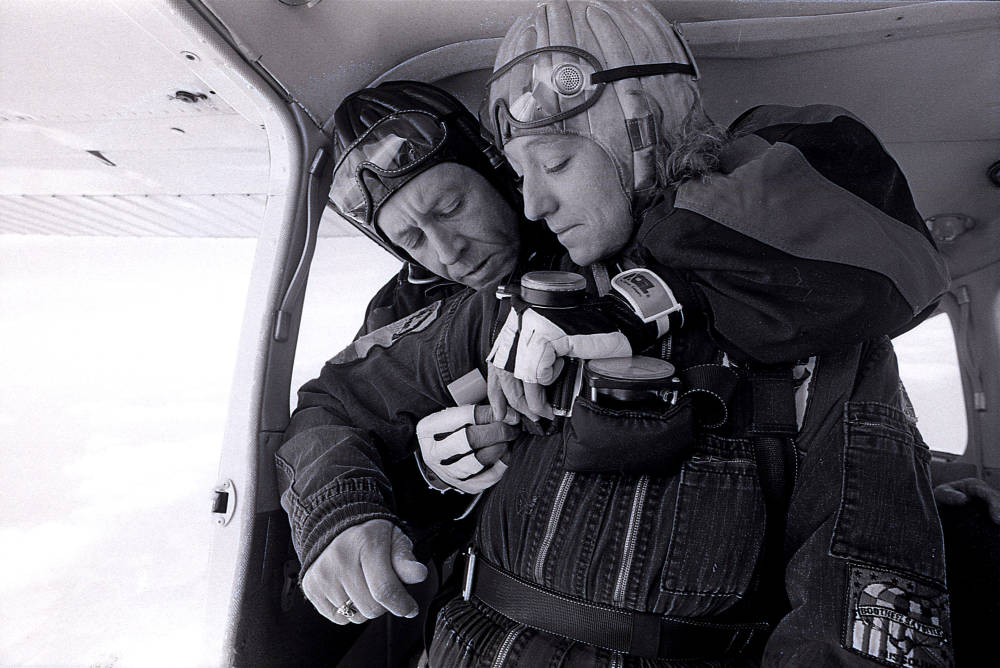 Dwight Gates of Cape Girardeau secures the harness on Cindy Propst of Sikeston prior to their tandem free-fall jump from an airplane over Sikeston Airport Sunday. Gates' business, Skysports Inc., offers the tandem free fall for those who want to experience the thrill of skydiving without the extensive training required. (Southeast Missourian archive)

IN JUMP, INSTRUCTOR AND CUSTOMERS SHARE A SINGLE PARACHUTE

Dwight Gates said there is a surprising number of people wanting to dive from an airplane two miles high and fall 120 miles an hour halfway back to terra firma until, it is hoped, a parachute slows the drop.

Gates has begun a service that allows people to skydive without undergoing hours of training required for solo parachuting. Using a special parachute rig, he jumps with the customer, with both of them strapped together for the two-mile descent.

Gates said the sport appeals to a variety of people.

Although much interest exists among university students, it appeals to both genders and all ages, he said.

One of this customers is a 60-year-old grandfather looking forward to his first jump. News commentator Paul Harvey, who is a pilot, made his first tandem jump recently. He is 72.

Gates has been instructing students in static-line and free-fall jumps for 12 years. He has experienced 1,250 descents, mostly free fall.

People have different reasons for wanting to step off an airplane and plunge to earth, trusting their lives to a piece of multi-colored nylon.

"Usually, it's thrill seekers out to get a rush," Gates commented. "They want to feel they are risking their lives. Actually, there are many other sports in which they'd be risking more. Many people just want to say they have jumped from an airplane. But one in five come back for more, and half of those go on to become experienced skydivers."

"Skydiving is where the fun is. Divers consider the jump to be over when they pull the ripcord," he said. The average free-fall time lasts about 40 seconds, and the maximum about 60 seconds under normal circumstances. The world record was set at 100,000 feet. It involved a U.S. military experimental jump from a high-altitude balloon.

"I would recommend it as a stress reliever, in a way," Gates said. "When you are jumping, the last thing you are thinking about are the problems you had the past week."

Gates talks with potential customers about their reasons behind wanting to jump, ascertaining they definitely want to take the plunge. Some people, he said, may have the wrong motive, such as wanting to keep up with somebody they know who has experienced it.

Gates, who operates Skysports Inc., said the new tandem skydive service involves about 30 minutes of step-by-step ground school instruction on the basics of exiting, free fall, descent and landing. The training is one on one. 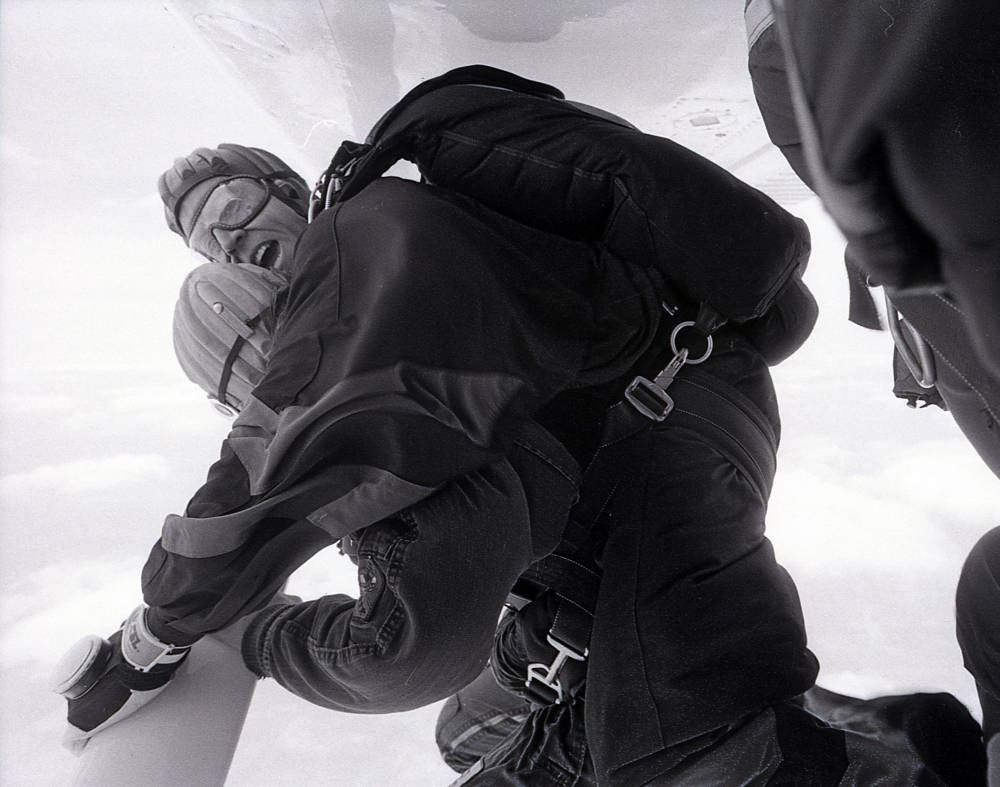 Dwight Gates and Cindy Propst prepare to jump in tandem from an airplane flying at over 10,000 feet above Sikeston. The tandem free fall will last about 40 seconds, at which time the parachute opens and the pair glide to earth. The jump was Propst's first. (Southeast Missourian archive)

When they make the 10,500-foot jump, Gates said the customer scoots out of the airplane, which is traveling about 70 mph, holds on to a wing strut for a moment, then releases simultaneously. Gates wears the parachute, along with a spare in case of an emergency.

The customer has the option of pulling the ripcord, which ends the 40-second free fall and starts the five-minute ride under the canopy. The duo are plummeting 120 mph during free fall. An experienced diver can reach 180 mph by tucking into a track position with his head down and arms back to minimize wind resistance.

Gates uses a directional canopy, allowing relatively precise landings. Most landings are made at the Sikesto0n airport.

Customers have a choice of where they want to land, if the site they choose is free of trees, power lines and other potential hazards. A person could literally drop in on a friend who lives in a rural area.

Customers must be 18 or older and in good physical condition, not weighing more than 220 pounds and not suffering from ankle or leg injuries, Gates said.

Most of the jumping is done on Saturdays and Sundays. The fee for a one-time tandem free fall is $125...

Licensed as an instructor since 1977, Gates said he is the only licensed tandem jumping instructor in Southeast Missouri...

Gates started jumping 17 years ago, soon after attaining his pilot's license. "Flying was not as much of a thrill as I thought it would be. One day, I met some skydivers at the airport and remained to watch them. I thought, 'That's got to be a rush' and made my first jump in two weeks."

He compares the rush from skydiving only to drag racing, which he became involved in two years ago.

When not skydiving or drag racing, he operates Dwight's Town Plaza Standard Station at the corner of William and North Kingshighway in Cape Girardeau.

Ironically, Gates suffers from acrophobia (fear of heights). Confidence in his equipment and other factors have helped overcome his fear of heights while jumping. "Most skydivers say the most dangerous part of the sport is the drive to and from the airport," he said.