From the archive: Memories of Bataan

Published April 6, 1992, in the Southeast Missourian: 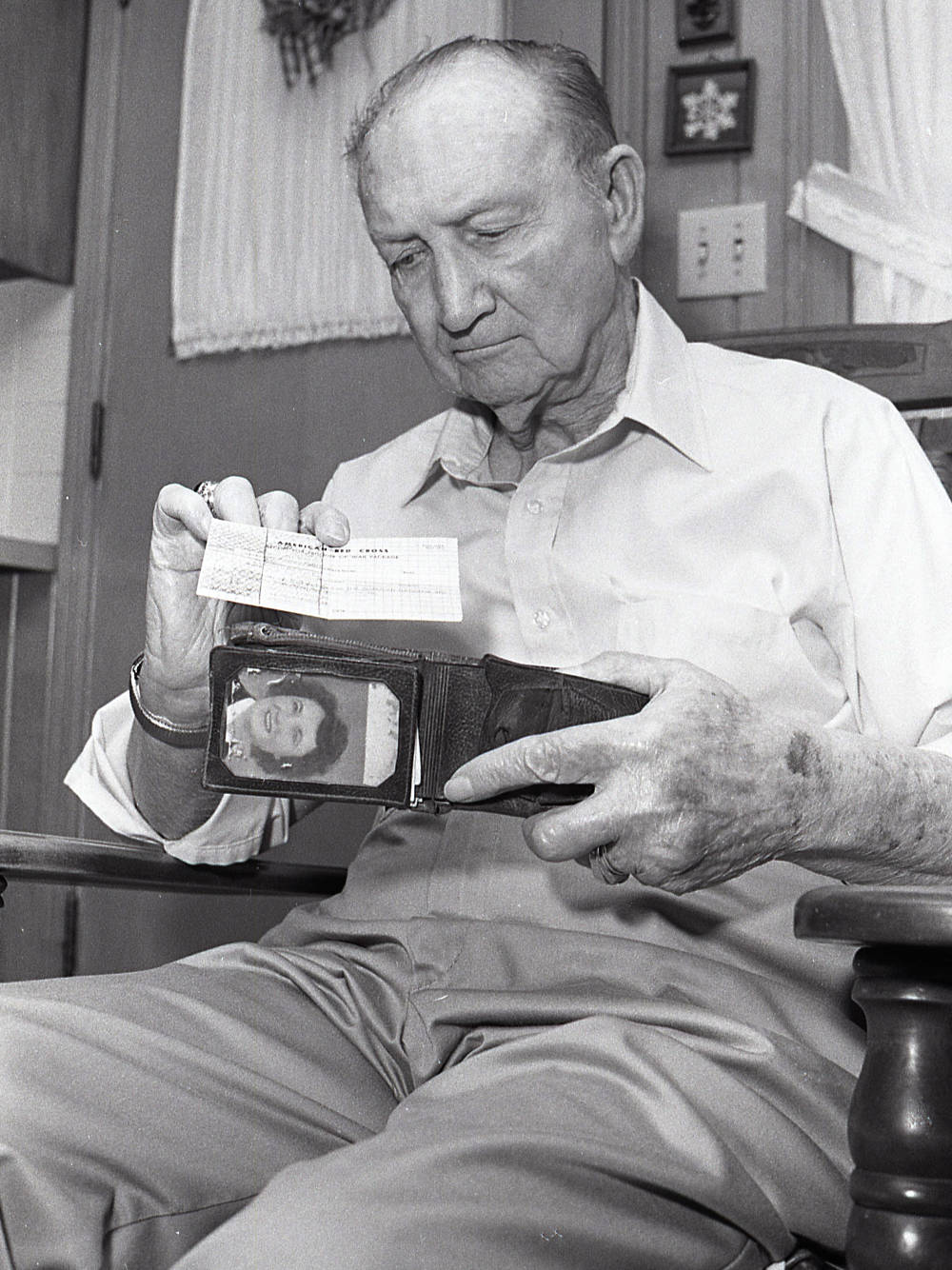 With a wallet containing a picture of his sister that he carried during World War II, Charles Branum of Cape Girardeau recalls his survival of the Bataan Death March April 9, 1942. (FRED LYNCH ~ Southeast Missourian archive)

In solemn retrospection, Charles Branum of Cape Girardeau will observe the 50th anniversary this week of an event he'd rather forget.

On April 9, 1942, he was one of some 600,000 American and Filipino soldiers captured by Japanese armed forces in the Philippines and sent on a 70-mile trek from Bataan later known as "The March of Death."

Death totals during the march vary depending on the source, but some have put the toll as high as 100,000. Many more died in the squalid conditions in various prisoner-of-war camps set up by the Japanese until the prisoners were liberated 2 1/2 years later.

Branum, 72, keenly remembers the intense combat in the days prior to the allies' surrender as well as the long march, where prisoners were denied food and were given little water and rest.

He was in the Army Air Corps at the time and had been separated from his small camp of 19 American West Point prep school students since the Japanese attack on the Philippines in December 1941.

After the initial Japanese invasion, Branum said Gen. Douglas McArthur, who directed the allied effort in the Philippines, ordered a withdrawal to Bataan. At their tiny camp in the mountains, Branum's group was cut off and had to work their way through dense jungle back to Bataan.

It was during the withdrawal and the intense fighting on the Bataan peninsula where Branum was wounded six times and awarded the Silver Star, for valor on the battlefield.

For days, he was in front-line jungle combat with the Japanese, who were close enough that Branum said you could hear their conversations at night.

Branum said the allied forces continued to defend Bataan and Corregidor for weeks while under heavy Japanese attack. He said that when word came of the surrender April 9, many soldiers thought it was a hoax.

"We didn't surrender," he said. "As the Japs came in, we set up our guns and started mowing them down. They didn't know what to think."

Once captured, Branum said he remembers making a conscious decision not to despair on the first day of the infamous march.

"We started down this old dusty road, and I found myself alone on a curve and I sat down and thought, 'what kind of mess have I gotten myself into.'

"And I'm ashamed to say it, but I started to cry. Then I decided I needed to get up and face this like I'd faced everything else."

According to 1944 news reports based on prisoners' accounts of the march, marchers were stripped of any personal belongings, and the Japanese soldiers slapped and beat them with sticks, as they marched along without food or water for hours on end.

Branum attested to the reports' validity. Although a strapping 185-pound "farm boy" from Sikeston when he entered the service, the march and the conditions in the subsequent prison camps left him an emaciated and sickly 80 pounds upon release from prison.

"The march took nine days, and in that time I had about a canteen and a half of water, and they fed us about a half a canteen of rice with rock salt on top of it.

"We marched as long as 36 hours without stopping, day and night," he said. "We were running out of water and there were artesian wells all around on both sides of the road, but they wouldn't let us have any of the water.

"Guys would break and run and they'd just shoot them down."

Branum remembers when one of the sick men he helped along the march was killed by his captors.

"They'd given us a short break, and when they told us to get up and leave, he stumbled," he said. "He was sick with high fever, but when he stumbled, the (guard) shot him."

The Japanese soldier then put his bayonet through the American's chest, Branum said. "That really hurt me bad to see that."

Branum said that once when Japanese guards discovered razor blades on a prisoner, the guards lined up nearby prisoners, counted off 10, and executed them. Branum was just to the right of the tenth one chosen, he said.

He also recalls when a large group of sick and dying Filipino soldiers were dumped into a large common grave.

"Half of them were still alive and they'd send the healthier ones down there with shovels to finish off the ones trying to crawl out of there," Branum said.

He was first taken to San Fernando in Pampanga Province, then taken to Camp O'Donnell where he finished "The March of Death." He said the death rate of prisoners was accelerated in the prisoner-of-war camps.

Most of the American and Filipino prisoners died of starvation, forced hard labor and brutality, Branum said. Malnutrition spawned a host of other diseases, and when he was liberated, he suffered from malaria, amoebic dysentery and a number of parasites.

After two months, Branum's prison work detail of 300 men had dwindled to 54 men. He also was included in a number of prisoners who were sent to Japan to work.

The 11-day trip to Japan in the filthy, vermin-infested hold of a ship only worsened the prisoners' already dismal condition.

Despite the horrors of imprisonment, Branum most vividly remembers the day he was told that the Japanese had surrendered.

"You could hear a pin drop in that place when the major told us that," he said. "We were pretty tough men by that time, but I imagine every man there shed a tear."

Unfortunately, Branum remained a prisoner of sorts, as he spent the next year and a half in hospitals trying to recuperate from his illnesses.

He said that despite the sickness, there is no way to adequately describe the joy he felt when he ate his first steak dinner after a diet consisting mostly of rice; or arriving at San Francisco on his return to the United States.

"When we passed under the Golden Gate Bridge it was something I'll never forget," Branum said. "It was amazing to see all of us overcome with emotion; happy to finally be home again."

Branum subsequently earned an engineering degree in natural gas and petroleum, and he retired from Union Electric in 1984.

Charles Branum passed away in Jan. 14, 2001. His obituary appeared in the Southeast Missourian two days later:

Charles was a 1938 graduate of Sikeston, Mo., High School, attended Southeast Missouri State University, and graduated from Texas A&M in 1950 with a natural gas and petroleum engineering degree.

He worked for the city of Sikeston, and in 1953 was employed with Texas Eastern Natural Gas Transmission Co. In 1960 he went to work for Missouri Utilities, later known as Union Electric. He retired as superintendent of gas and water in 1984.

He was a defender of Bataan and Corregidor and as a prisoner of war was in the grueling Bataan Death March. He was a prisoner of war from April 1942 until his liberation in September 1945 at Camp O'Donald, Billibid, and Mukaishima, where he witnessed the atomic bomb attack on Hiroshima.

He was awarded two Silver Stars, a Bronze Star and six Purple Hearts. Sgt. Branum participated in the raising of the famous American Flag made from parachutes, as the first United States Flag flown in Japan at the conclusion of the war. The flag is on display at Fort Lee Hall of Flags in Virginia.

Charles was a life member of American Ex-Prisoners of War and Disabled American Veterans. He was a member of First United Methodist Church of Sikeston, Professional Engineers and Defender of Bataan and Corregidor. He had been active in Boy Scouts of America.

He was preceded in death by brothers Harry and Billy, and sisters Alma, Helen and Elzora.

Friends may call at Ford and Sons Mt. Auburn Chapel from 4-8 p.m. today.

Funeral service will be at 10 a.m. Wednesday at the chapel, with Dr. Derek Staples of Cape Girardeau and the Rev. Rick Lasley of Sikeston officiating. Burial will be in Garden of Memories Cemetery at Sikeston, with military rites to be conducted.

In lieu of flowers, donations may be made to the Disabled American Veterans.