From the archive: A history of Altenburg

Published April 28, 1994, in the Southeast Missourian: 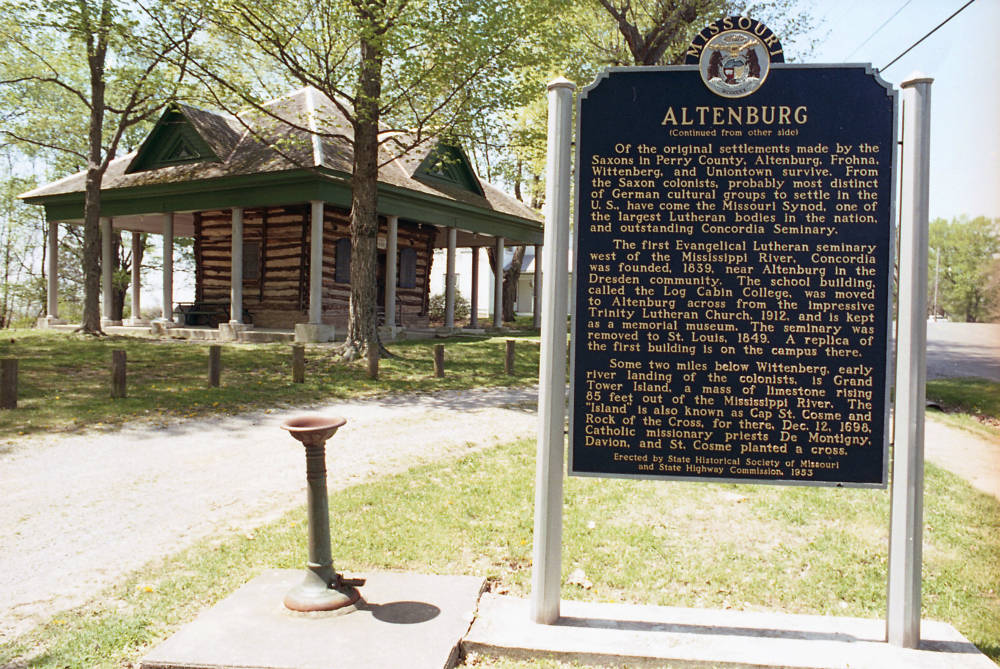 ALTENBURG: FOUNDED IN SEARCH OF RELIGIOUS FREEDOM, COMMUNITY IS RICH IN GERMAN HERITAGE

ALTENBURG, Mo. — The east Perry County community of Altenburg is the only community in the world named after the 1,000-year-old city of 56,000 in the German state of Saxony.

The name Altenburg, Saxony, founded in 976 A.D., comes from the German alten (old) and burg (fortress), and is named for an ancient castle in the city.

Altenburg, Mo. was laid out and founded by German Lutheran pilgrims, who came to Perry County from Altenburg and nearby villages in Saxony, Germany. The 668 immigrants came to Missouri in the largest mass immigration since the English pilgrims. German Lutherans sought freedom from the oppressive German Saxon State Church, which they felt had strayed far from the teachings of the Bible and the doctrines of the founder of the Lutheran Church, Dr. Martin Luther.

In Germany they formed an Auswanderungs-Gesellschaft (emigration society) with $88,000 in communal funds, and in 1838 they sailed from Bremen, Germany, in five chartered ships. One ship was lost at sea; the other four made it to New Orleans. From there, they journeyed by steamboat to St. Louis, where they founded a parish.

At St. Louis, the immigrants bought 4,475 acres of land in Perry County for $9,234 from the communal fund. They chose Perry County because the gentle, rolling hills and forested woodlands reminded them of the terrain in Saxony.

The pilgrims stepped off the steamboat from St. Louis on the west bank of the Mississippi River near the present gas pipeline bridge over the river. They established seven congregations and seven communities: Altenburg, Wittenberg, Frohna, Dresden, Seelitz, Johannisberg and Paitzdorf (now Uniontown), all named after towns and villages in Saxony.

They barely survived the physical hardships during their first year in Perry County. In addition, they had to contend with the spiritual blow of finding out their pastor, Martin Stephan, was a false leader.

After Stephan's exile to nearby Southern Illinois, the group was led by another pastor, C.F.W. Walther. It was under Walther's leadership that Altenburg and the other communities began to grow and prosper. Under Walther's guidance, a log cabin college was opened on Dec. 9, 1839, with seven students to train teachers and pastors for the seven churches. The cabin was the first Lutheran seminary west of the Mississippi River. It was later moved to St. Louis.

From this tiny colony of German Lutheran immigrants was to come the foundation for a new church. In 1847, the Lutheran Church-Missouri Synod was formed in Chicago, and Walther was elected its first president. 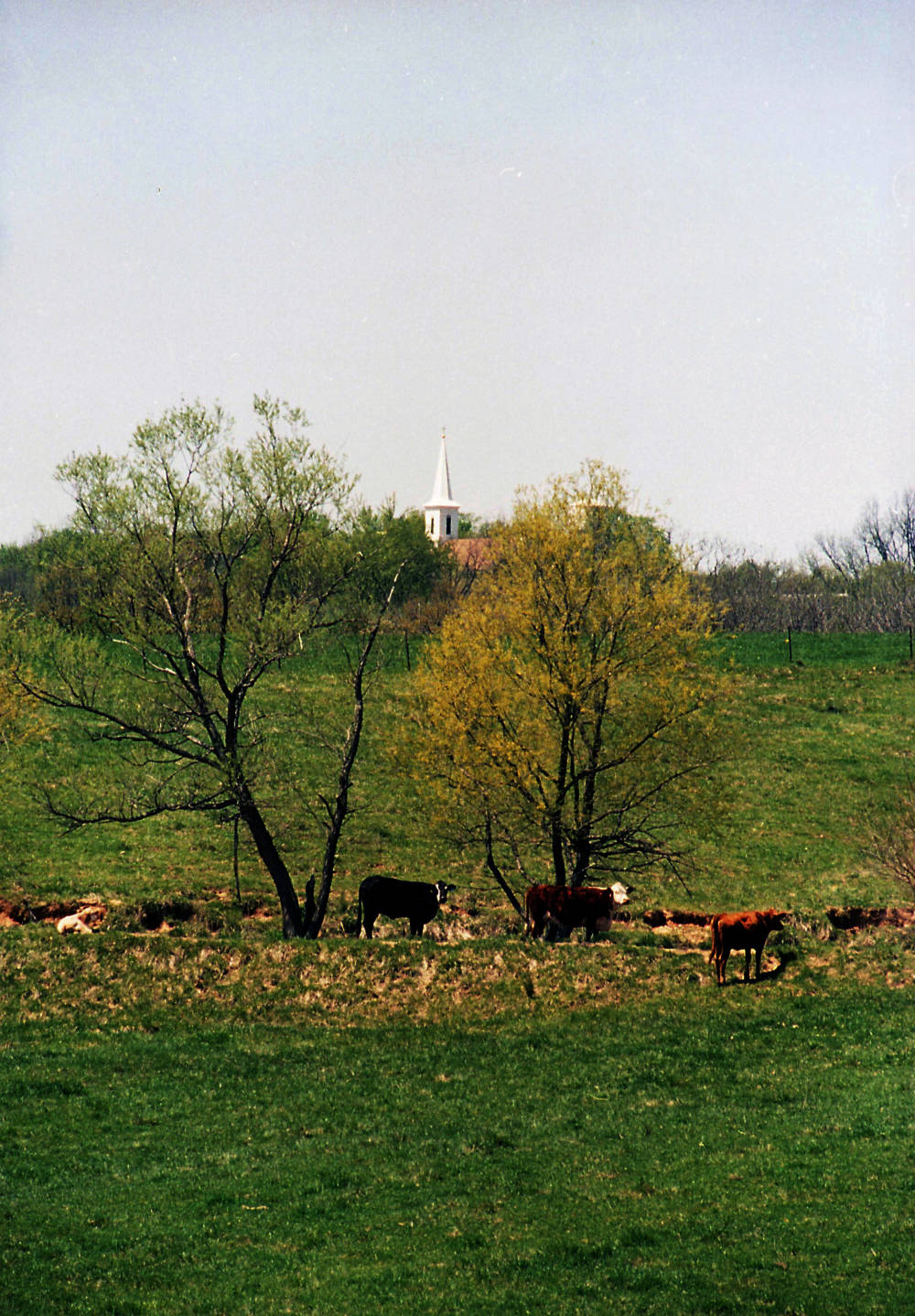 A view from the site of Dresden looking toward the town of Altenburg, which is surrounded by beautiful farms and pastures. (PHOTO BY LOU PEUKERT ~ Southeast Missourian archive)

Of the original settlements established by the Saxon Lutherans in Perry County, Altenburg, Frohna and Uniontown survive.

Wittenberg, situated on the banks of the Mississippi where the immigrants stepped off the steamboat, has been hit by a series of major floods since the turn of the century. Few buildings are left there.

But Altenburg and its neighboring community of Frohna have continued to prosper because of the fertile farmland that surrounds the two towns and a vigorous timber industry.

Altenburg Mayor Tom Meyr is pleased the town's population has increased from 256 to 307 in 1990.

Meyr said:"It's a good sign that we're not losing as many of our young people after they graduate from high school. With industries like the East Perry Lumber Co., Timber Exports, and Major Custom Cable there are jobs available for husbands and their wives."

When not tending community business, Meyr operates a fork lift at nearby East Perry Lumber Co.

Some Altenburg residents work in nearby Perryville, McBride or Cape Girardeau. "They were born and raised here and they do not want to live anyplace else," said Meyr.

A native of Farrar, which is a few miles north of Altenburg on Route C, Allen Lohmann, 36, came to Altenburg in late 1993 to reopen the town's only tavern, formerly called Someplace Else. The tavern had been closed for two years. Lohman said he decided to reopen the tavern, now called The Port, because he grew up in east Perry County and enjoys living in a small town like Altenburg.

There are no fast-food places in Altenburg, but there's no problem finding good, home-cooked meals at Trics, or Pete's Place. Altenburg Foods is a full-line grocery and meat store. The Bank of Altenburg is close by, and Emily's Beauty Shop is across the street. Residents fuel up at the Gas Mat at the west end of town, and get their hardware supplies from Bellman's. The Altenburg garage handles most vehicle repairs.

There is a public elementary school in Altenburg, but most of the children attend Trinity Lutheran School. 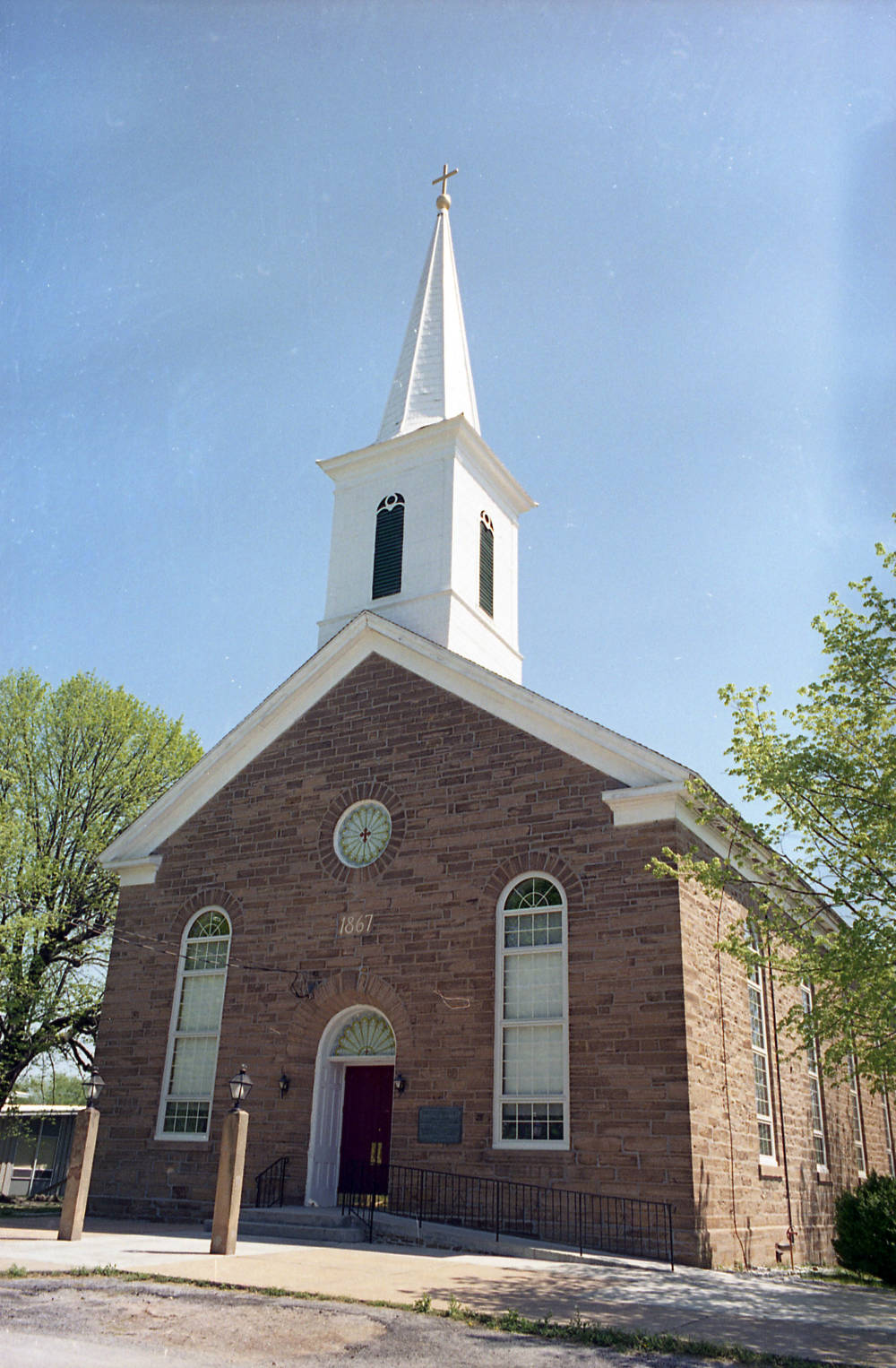 Most people live along Route A, which winds its way for nearly three miles through town, much like the narrow roads that snake through many of the smaller towns and villages in rural Germany.

"Some people might think life is pretty boring in Altenburg," said Meyr. "But between the ladies aids at the two churches (Trinity and Immanuel Lutheran), the other church organizations, and the men's and women's church league softball teams, you can stay busy pretty much the entire year.

"Of course, a lot of people just like to sit back after work and enjoy our small-town atmosphere while working in the yard or garden. After the mill and the other businesses close down for the day, it gets real quiet and peaceful around here."

Because Altenburg is considered the birthplace of the Lutheran Church-Missouri Synod, it hosts many visitors from throughout the United States and world. They come to see the log cabin seminary and Lutheran Heritage Museum in Altenburg and the Saxon Lutheran Memorial in nearby Frohna.

Meyr said, "On the average, we get about three or four tour buses a month that stop in Altenburg for people to visit the historic sites."

Meyr said more should be done to preserve Altenburg's heritage, including the native language of the Saxon pilgrims. "At one time everyone learned German because it was spoken every day in the family home," he said. "The kids only learned English when they started school."

Today, fewer young people can speak and read the native tongue, which some grandparents still speak fluently. Meyr said visitors to Altenburg are surprised to find that he does not speak the native tongue.

Altenburg's city clerk and collector, Carol Wunderlich, works at the Gas Mat. Wunderlich said a man came in recently who spoke German and wanted to know about the history of the town.

"He was a resident of Altenburg, Germany, and had stopped here to find out more about the history of our town," said Wunderlich. "As it turned out, one of the members of our Lion's club was showing slides he had taken in Altenburg, Germany. I sent the visitor from Germany over to the meeting, and he wound up telling everyone more about the slides than the club member did."