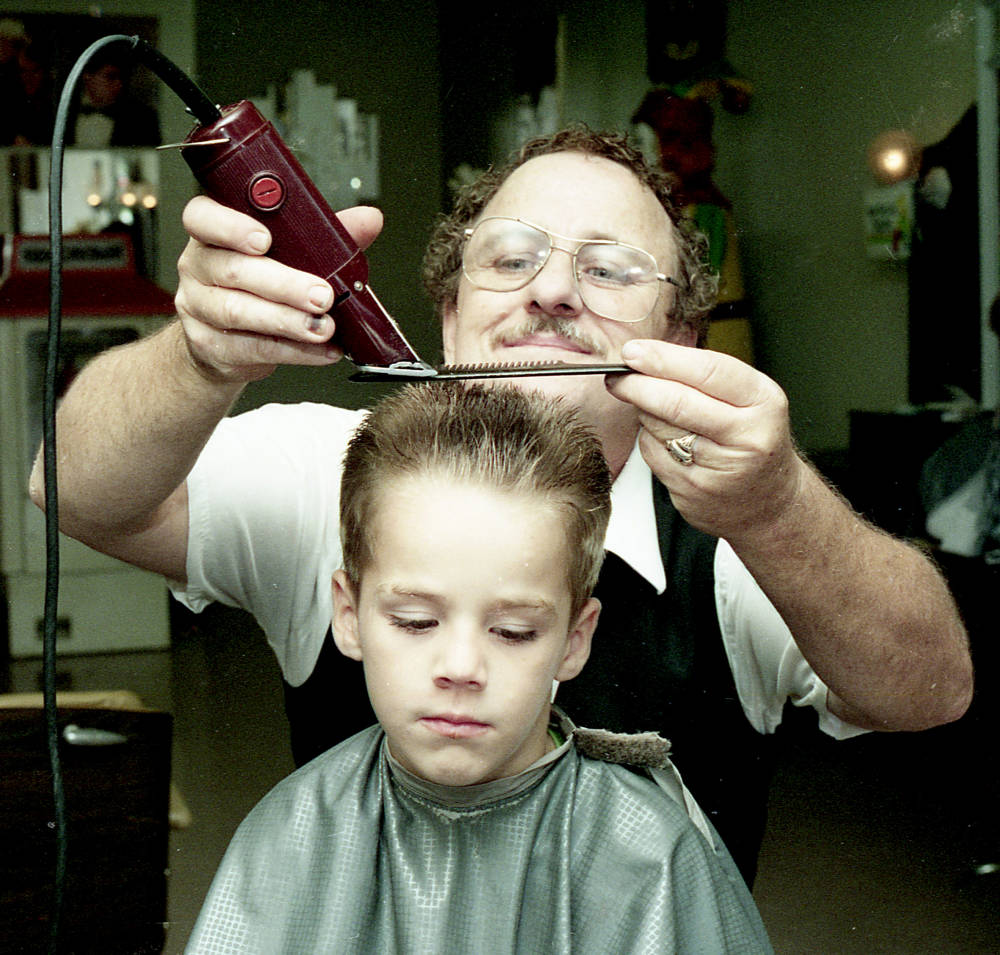 I'M HAVING A BAD HAIR DAY

YOUNG AND OLD, MEN AND WOMEN ALL SEEM OBSESSED WITH THEIR HAIR

"I'm having a bad hair day." It's a lament hairdressers have all heard.

"People come in and tell me that all the time," said Gene Penny, who operates Hombre Hair Shop in Cape Girardeau. "By the time they leave, they feel like they have a good hair day."

A hair stylist for 31 years, Penny says, "Hair is just about the most important thing that a person has.

"It changes your attitude about yourself," said Penny, adding that hair stylists not only cut hair but serve as "father confessors and psychiatrists" to their customers.

"My customers become sort of intimate. They trust you," he said.

In addition to cutting hair, Hombre also deals with hairpieces. Penny recalled one balding customer who was divorced.

The man was depressed. "I just happened to have a hairpiece that fit him," said Penny. The hairpiece was more than cosmetic, it gave the man an emotional lift, said Penny.

From mohawks to perms, hair styles say a lot about a person.

Times change and so do hair styles. Penny said short haircuts are popular these days for both men and women. 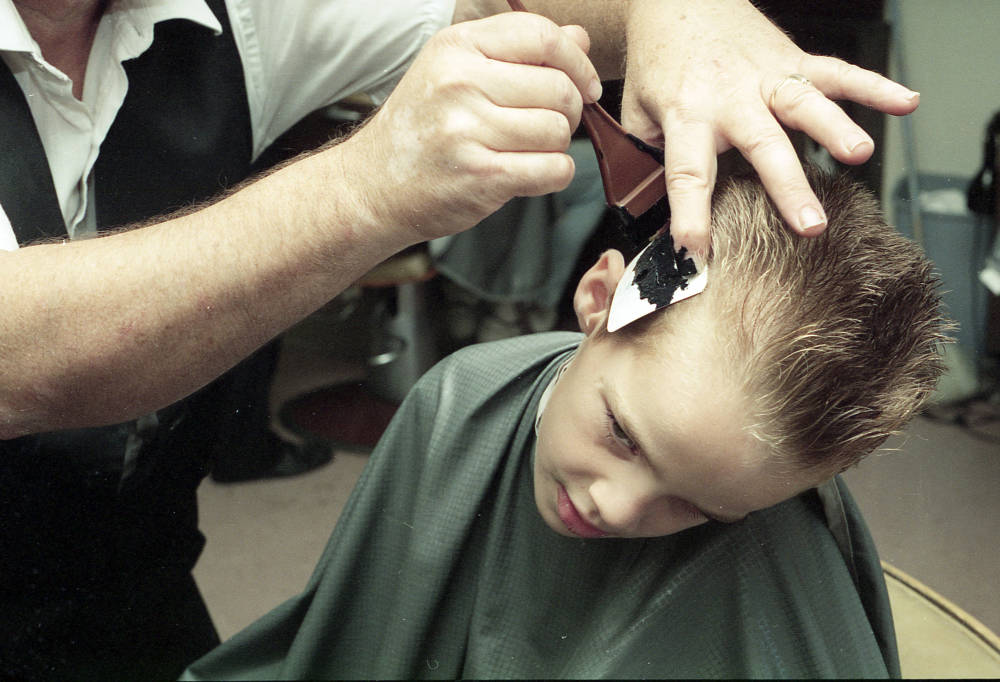 "The hair styles we are doing right now are sort of what was the pre-Beatles era."

People today are "rushed with their lives. Women don't have time to deal with a lot of elaborate hair. They want something quick and easy," said Penny.

"They want it real short, or they get it permed on top or clipper cut on the side."

In addition to traditional styles, beauticians deal with zany cuts.

"We always cut for the (local) swim team," said Penny. "They get mohawks." One team member has the outline of his hand shaved into the back of his head.

Recently, Penny did a unique haircut for a teenager who was preparing to attend the Lollapalooza concert in St. Louis. "I cut his hair all the way to the top, sort of like an ice cream cone," he recalled.

The spiked haircut included the bleached-in words "Scum of the Earth." 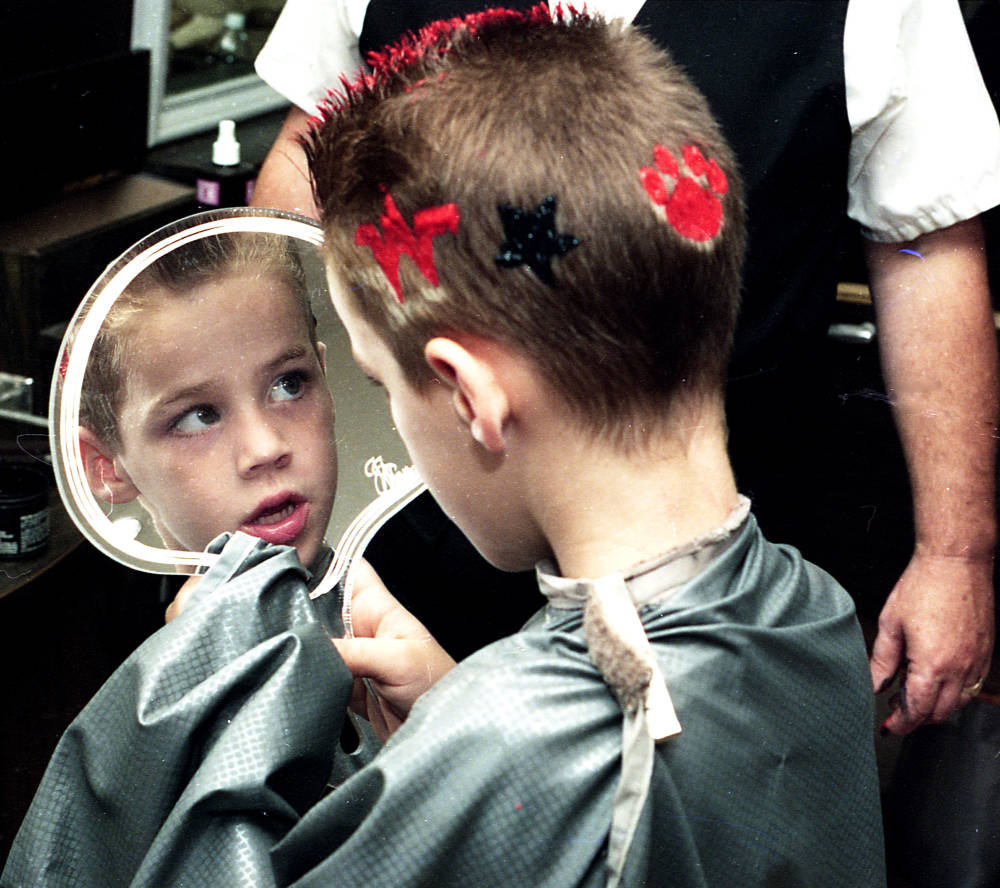 Such hairdos are far from typical. "Most people are fairly conservative about getting their hair cut," said Penny.

Penny's place is a family business which includes his wife and son.

"My son is a sixth-generation hairdresser. We go all the way back to Scotland. There was this one old fellow in our family that cut hair until he was 100 years old.
He cut hair, pulled teeth and sold pots and pans," said Penny.

Penny isn't the only Cape Girardeau stylist who has done some unusual hair styles.

Martha Baker, manager of the JCPenney Styling Salon, has seen her share of zig-zags and Batman creations. "The soccer and football boys want their jersey numbers (shaved) on their heads." 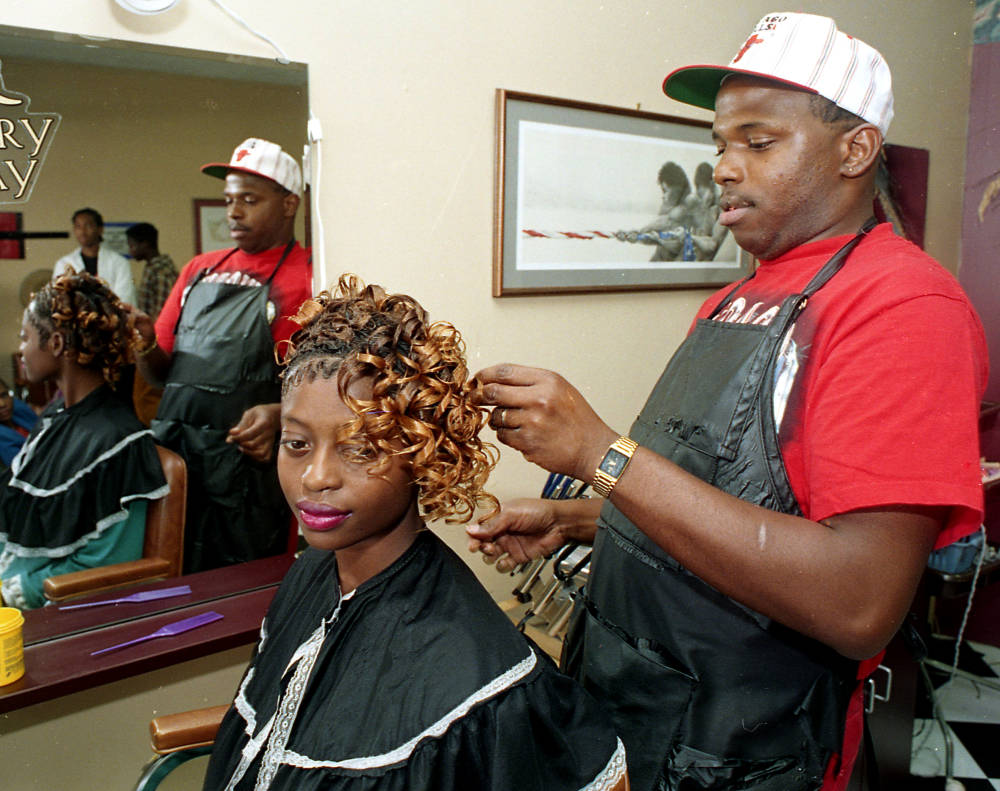 With 47 stylists and four receptionists, the Cape Girardeau salon is the largest between Memphis and St. Louis, Baker said.

Through the use of a video system, customers can view how they would look with a certain style before getting their hair cut.

"The hair style says a lot about an individual," Baker said.

"We are seeing lots of hair color. Hair color is the fashion for both men and women, from subtle highlights to bright color," she said.

"Now we see guys with ponytails," she added. "They come in to get it trimmed up."

Many of today's fashionable hairdos reflect those of television and movie stars. "They want what the stars are wearing a lot," said Lynda Morthland of Marilyn's Hair Salon in Cape Girardeau.

As for "bad hair days," Morthland said:"I think probably the reason for it would be low maintenance, not having it trimmed up enough."

Then again, "I think sometimes it's mental," she said. "I think their whole day might be a blah day." 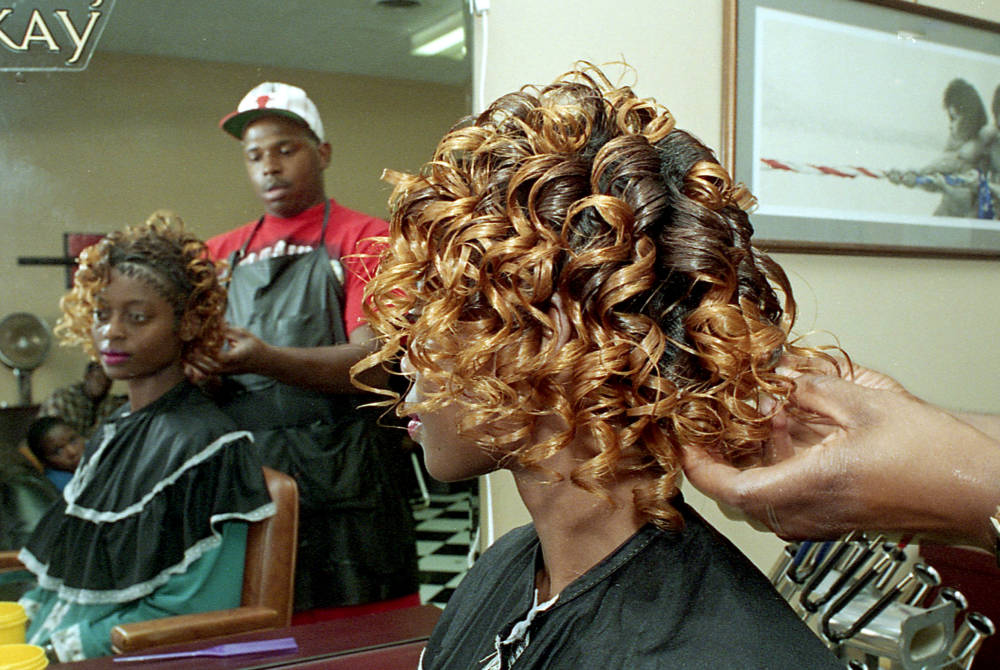 As to styles, she said, "Anything goes. I think just like the length of your skirt, it (a hair style) fits your personality."

Carolyn Rouviere, owner of Hair Biz, said the styles of past decades have made a comeback. "Right now, there are a lot of retro looks. They are putting back looks from the '60s and '70s."

But Rouviere said there's no single hair style in vogue these days. "There are just a variety of styles now," she said.

"Most people come in with an idea of what they want," she said.

When it comes to hair styles, "women are more adventurous than men," she said.

But she added that men increasingly are wanting their hair styled, not just cut. "It's not unusual for men to get color or permed."

Hair styles are important to people. Rouviere said she has some clients who drive down from St. Louis just to get their hair done. 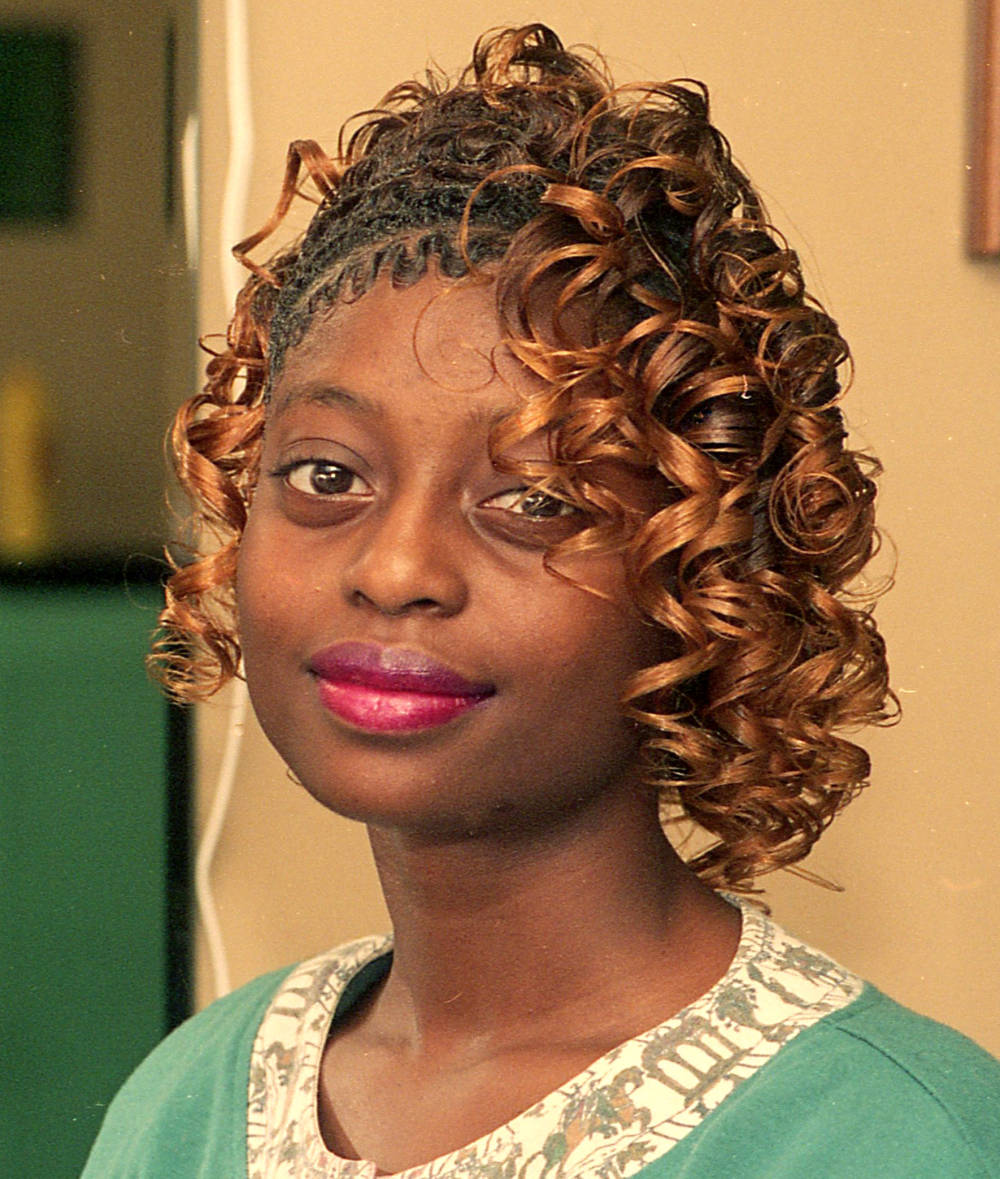 Area residents have a lot to choose from when it comes to hair-styling salons. There currently are 51 licensed beauty salons in Cape Girardeau and numerous hair stylists.

"We (Cape Girardeau) have a beauty college here that keeps cranking them out," said Rouviere.

For many people, all this hair styling means one thing: A good hair day.