From the archive: When the bells of St. Mary's fell silent

I have always lived within earshot of the bells of my parish church, St. Mary's Cathedral.

I remember them ringing the Angelus three times a day from the time I was a child. I remember them tolling somberly as my loved ones were brought into the church one last time. I remember the bells' annual, joyful return each Easter vigil, after 40 days of Lent. Day in and day out, the bells of St. Mary's have measured my life.

But in 1988, those three bells fell silent. This story tells how they were saved.

Published in the Southeast Missourian, March 14, 1988: 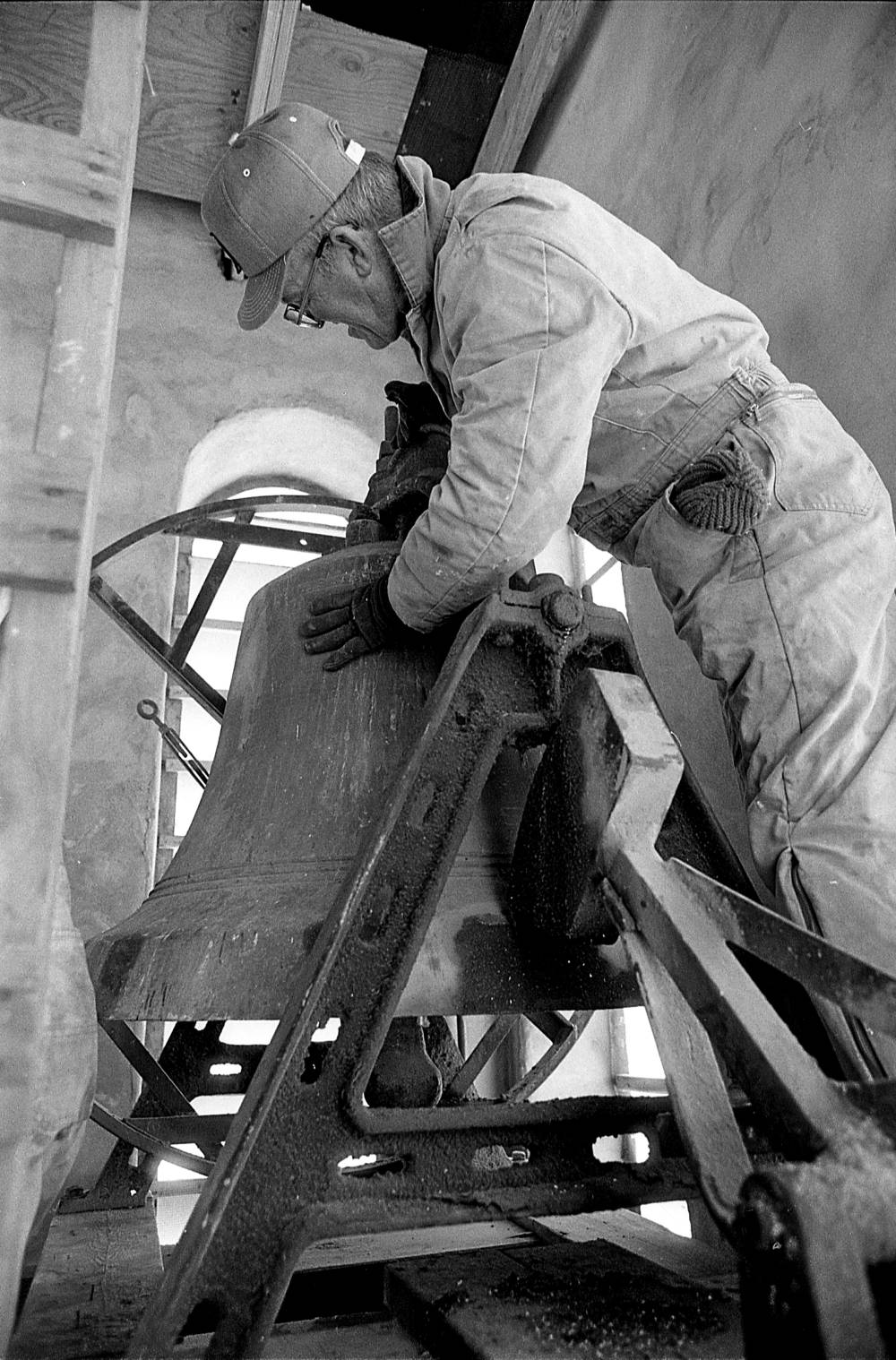 Jim Criddle of Cape Girardeau, an employee of the Drury Construction Company, inspects one of the bells in the bell tower of St. Mary's Cathedral in Cape Girardeau. (Mark Sterkel ~ Southeast Missourian archive)

Bells of St. Mary's are saved

The melodic bells of St. Mary's Cathedral have been silent the past several weeks.

But they will peal out the message of the resurrection Easter Sunday morning following extensive repairs to the mounts n which the bells rest.

The bells of St. Mary's have been a familiar sound in much of southeast Cape Girardeau for generations, calling parishioners to worship and prayer at 6 a.m., noon and 6 p.m., and tolling for funeral processions leaving the church at Sprigg and William.

But in late February the bells were silenced when it was discovered the wooden timbers on which they rest had badly deteriorated from rot over almost 100 years. There was a danger the three bells -- one weighing 1,500 pounds, one 1,000 and the other 600 -- could come crashing through the floors of the bell tower into the church entrance.

The Rev. Richard Rolwing, pastor at St. Mary's said the condition of the wooden beams was discovered during a church service when the church choir heard unusual sounds and strong vibrations coming from the bell tower. An inspection confirmed the dangerous condition of the mounts, and the decision was made to replace them as soon as possible.

In the meantime, the front door of the church was locked; parishioners entered through side doors to avoid being beneath the bell tower should the timbers fail.

Newell said when they climbed into the bell tower, their first task was to lift the bells off the rotting timbers.

To do that, they climbed another 16 feet into the steeple. At 80 feet above the street, they discovered another large wooden beam, mounted in the steeple to raise the bells, most likely with horses and ropes in 1891.

After lifting each of the bells with a chain hoist suspended from the wooden beam in the steeple, and placing them on temporary beams mounted in the windows in the bell tower, the rotted beams were finally cut away.

"We didn't realize just how bad a shape they were until we cut the beams, and the ends just fell out of the bell tower wall," Newell remarked.

"After that," said Schwartz, "we didn't take anything for granted."

Repairs began late last week. Newell said it has been a time-consuming job. All of the supplies and materials had to be lifted nearly 40 feet in the air to the lower section of the bell tower and brought in through a small circular window.

To date two of the rotted beams have been replaced with steel I-beams securely mounted inside the bell tower wall, which is 24 inches thick.

Newell said two m ore rotted timbers will be replaced with steel I-beams on the west and east walls of the bell tower, and a steel grate will be placed on top of the beams to provide a walkway to service the bells.

If everything goes alright, Newell said the work will be done in about a week to 10 days.

At that time, the electrical and mechanical controls which actually ring the bells (they are not wrong by hand as in some churches) must be reconnected.

Newell said the bells could be back in service in time for Good Friday services, but Rolwing says the church has decided to let them ring again on Easter morning.

According to the inscriptions on the bells, they were cast in 1891 by Hy. Stuckstede Bell Foundry of St. Louis.

Church records indicate the bells were purchased that same year, and installed and blessed on Sunday afternoon, Aug. 23, 1891, during a special church service in both German and English.

Referring to the new St. Mary's bells, an account in the Sept. 29, 1891, Cape Girardeau Democrat (newspaper) states: "They can be heard for miles away and it seems not to what church the weary pilgrim leans, the bells will remind him all the same that he should turn away from the paths of sin and go where all good people go." 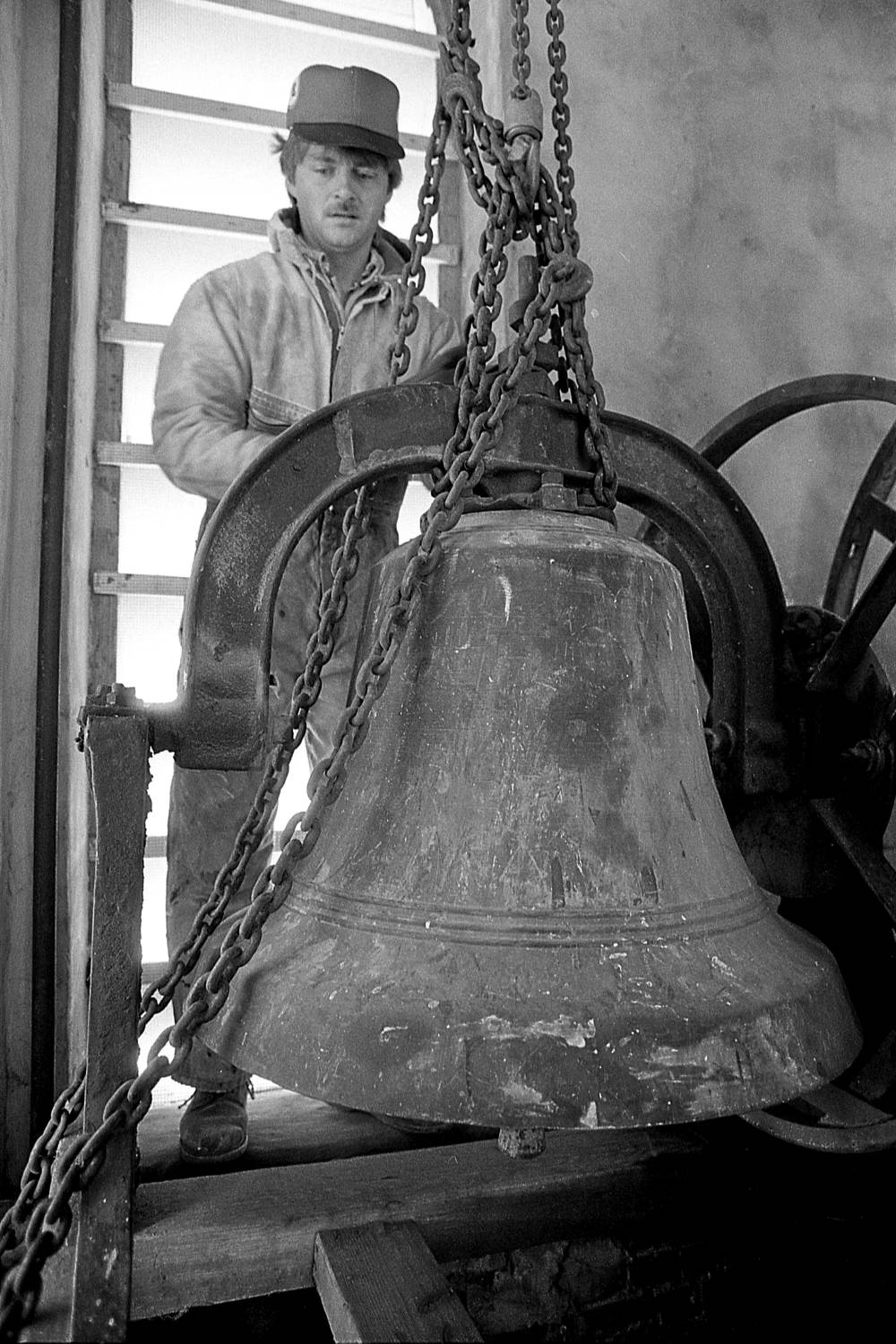 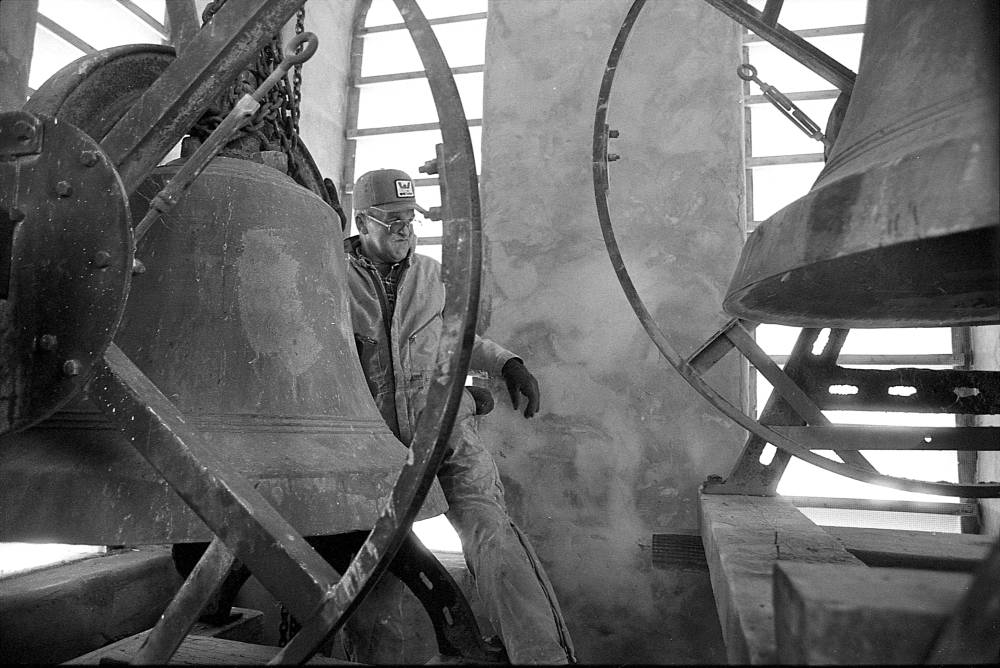 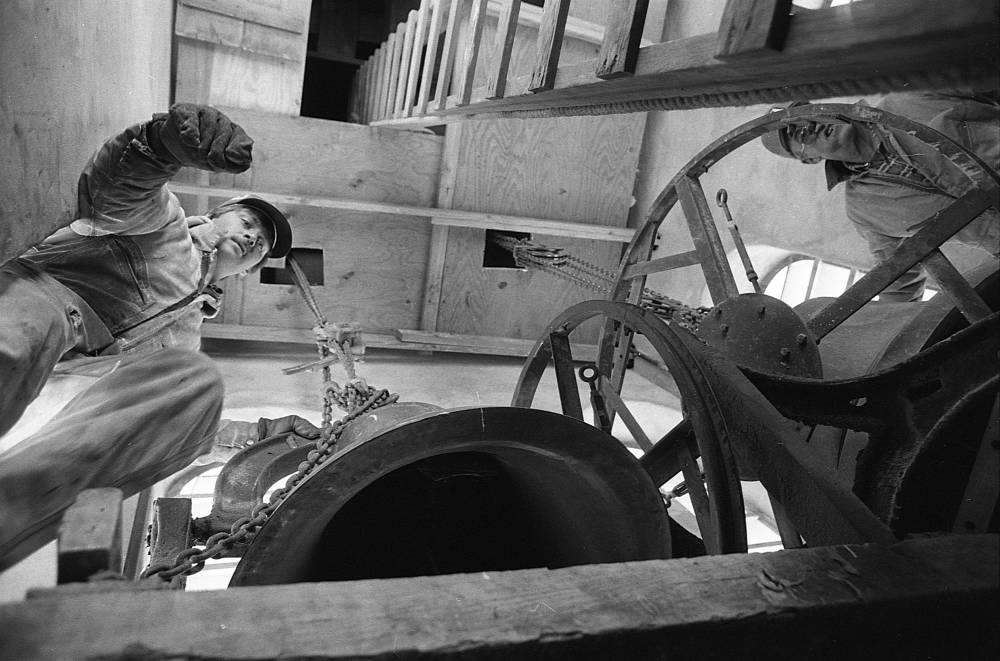