From the archive: Saying goodbye to a retiring presiding commissioner 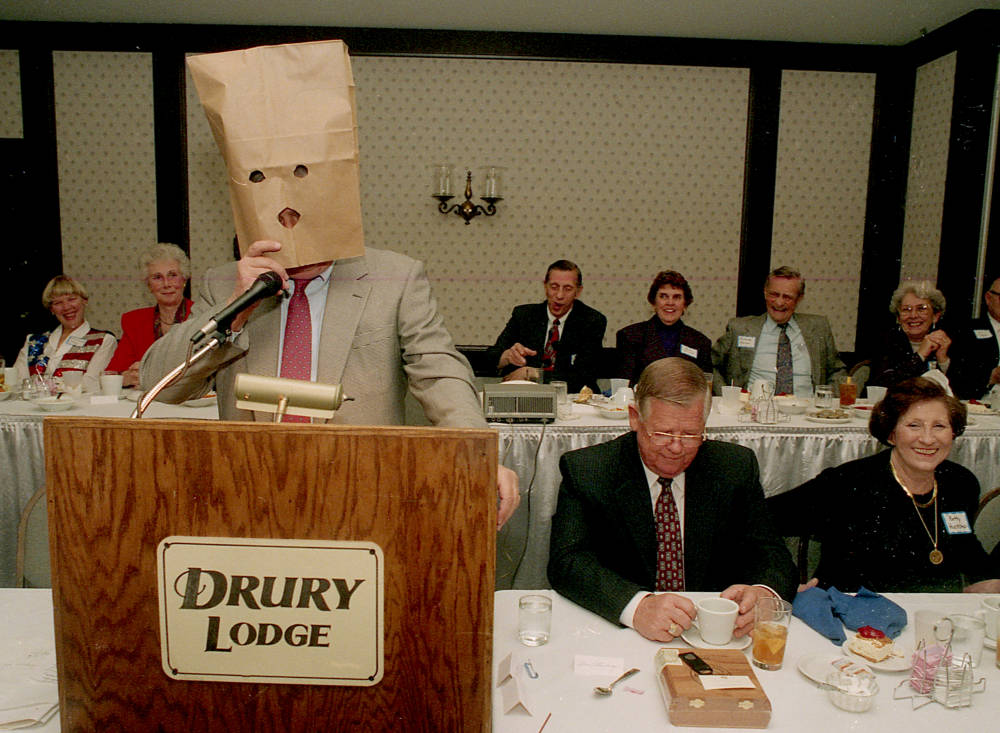 Retired Cape Girardeau County Presiding Commissioner Gene E. Huckstep said Friday night he either had a lot of friends or people were just sadistic and wanted to see him suffer.

Actually, he was right on both counts.

A crowd of about 400 people turned out to roast Huckstep. Although they were all his friends, they were also eager to see him suffer. More than a dozen speakers pummeled the colorful Huckstep for nearly three hours.

"Can you imagine what it would be like to take him through a Senate confirmation hearing," joked assistant U.S. Attorney Larry Ferrell, who served as prosecutor during part of Huckstep's 16-year tenure.

Although plenty of jabs were thrown, the speakers also praised Huckstep as a devoted public servant, a strong family man, a person of integrity and someone who beneath a crusty exterior was really a compassionate man always willing to serve others.

There was also plenty of praise for his wife of 48 years, Betty. His four children, grandchildren and other family members were in the crowd, including his 93-year old mother.

Dozens of stories were told about Huckstep, many of them focused on his legendary battles with government bureaucrats and people involved in the criminal justice system. His tendency to always say what was on his mind was also a lively source of information provided by roasters.

One of liveliest speakers was a boyhood friend, Richard Esicar, who kept the crowd roaring with his recollections of high school pranks the two had been involved in. Several of the pranks were aimed at the town of Jackson, fueled by the sports rivalry between Cape Central and Jackson high schools.

E.C. Younghouse, who served seven years as an associate commissioner with Huckstep, explained how when he first came on the county commission he asked Huckstep for his help.

Within a short time, he had been named in at least 15 different lawsuits filed against the county.

Younghouse also brought up the infamous woodpecker incident from several years ago, when several woodpeckers began doing serious damage to the front columns of the historic Common Pleas Courthouse. The noise was also distracting to people working at the courthouse.

Younghouse told how several efforts to get rid of the birds failed, until Huckstep took matters into his own hands.

Although he stopped short of admitting any role in slaying the woodpeckers, Huckstep conceded that "they were endangered when they started tearing up the damn building."

The woodpecker story was a recurring theme throughout the evening.

Huckstep's longtime friend, U.S. Sen. Christopher Bond, had intended to be at the event but was unable to fly in because of bad weather.

Bond, however, called and roasted Huckstep on a speaker phone.

Bond recalled one time when he was governor he took a call from Huckstep while meeting with a group of families and children. "It turns out Gene was a bit irate about an appointment I had just made, and I realized when I saw the looks of shock and horror on the faces of the people assembled there that I should never again take a call in front of women or children on a speaker phone from Gene Huckstep."

He also had words of praise for his friend and noted, "All of the time I have been in government and politics I have never seen a man with the vision, the compassion and the integrity and fight for what he believed for the people he served. I don't know when we will ever see another public servant like Gene Huckstep," said Bond. "I think maybe we'll want to wait another 50 or 100 years."

A.J. Seier, who served as master of ceremonies, noted that comments on the telephone got Huckstep into trouble a lot.

"You'll find in Huckstep's career the telephone, particularly speaker phones, have played a prominent part in his demise and sometimes to his chagrin," Seier said.

In his response, Huckstep returned fire on most of his roasters, but admitted he had earned his day on the firing line.

Huckstep said his success as presiding commissioner in making Cape County one of the strongest counties in the state, was due to a sound group of officeholders and county employees who were willing to work together for the good of the taxpayers.

"I guess I am one of the luckiest people on the face of the earth," he said. "I have so much to be thankful for."

Funds raised from the retirement dinner were donated to the St. Francis Hospital Foundation for scholarships for nurses.

Gene E. Huckstep passed away May 13, 1998, at the family home in Cape Girardeau. His served on the Cape Girardeau School Board from 1964-1973 as a member and past president. He was also elected as presiding commissioner, Cape Girardeau County Commission 1979-1994.