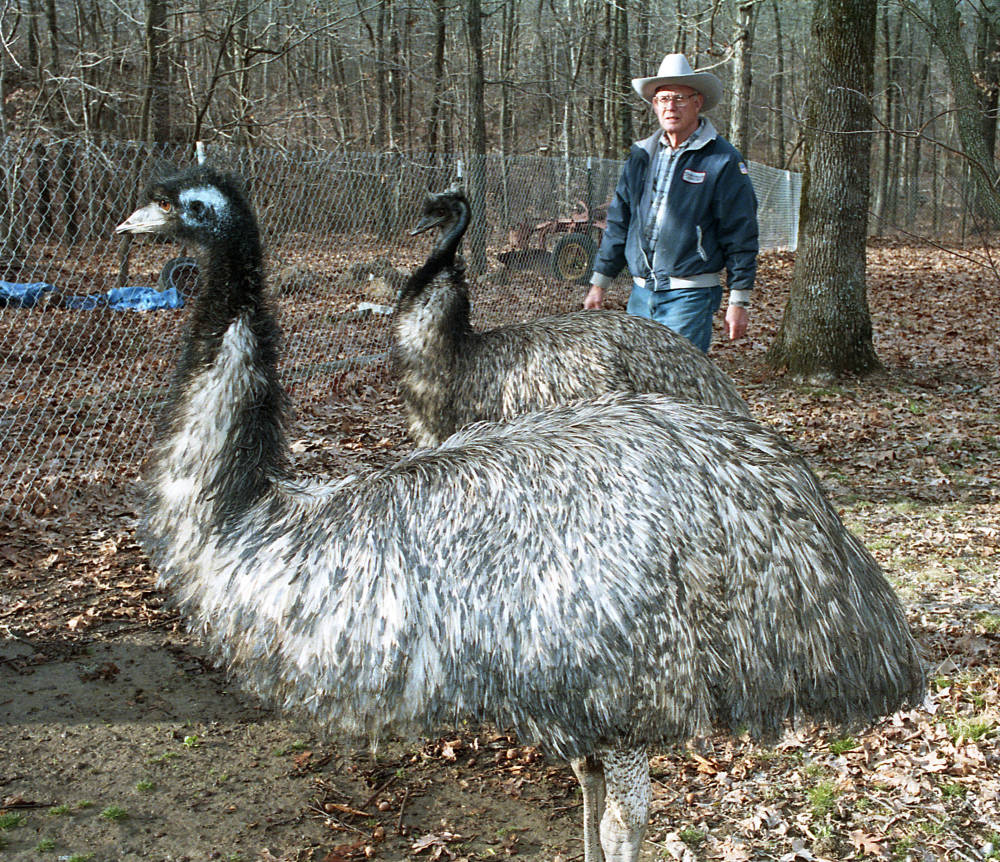 Carl Whitaker checked on two of his emus, Alice and Lance, which are 2 1/2 years old. (Fred Lynch ~ Southeast Missourian archive)

FARMERS AND RANCHERS IN REGION ADD EMUS AS ALTERNATIVE LIVESTOCK

By B. RAY OWEN
Southeast Missourian

The emu industry is on the rise in Missouri.

Farmers and ranchers interested in alternative livestock have invested great amounts of time and money in the breeding of the docile, easy-tempered birds.

As many as 400,000 emus, Australian cousins of the larger African ostriches, now call the United States home, and many of the birds are in Missouri.

The market is booming and the demand far exceeds the current supply for all ages of birds, say breeders. All emus in the United States are born and raised here.

"We've been raising the birds the past two years," said Carl Whitaker, a farmer near Burfordsville. Carl and his wife, Doreen, own the Sugar Maple Ranch.

"We started with two pairs of 3-month-old birds," Whitaker said. The Whitakers also have some rheas, smaller cousins to the emu.

"We hope to build our emu herd up," Whitaker said. "Four of our emus are mature, eight of them are younger birds. We'd like to build up to 10 breeding pairs."

Whitaker is assisted in the emu operation by his son, Mark Whitaker, of Oak Ridge.

"Mark manages the incubator and the raising of chicks," Whitaker said. "We 'baby' the chicks until they're about 3 months old. At that point, they can pretty well make it on their own."

Greg and Carolyn Verplancke of West Plains have been raising emus five years.

"We love it," Carolyn Verplancke said. "We used to have dairy cows, so this is a big change for us."

Emus are becoming more acceptable as an alternative to meat and chicken.

The beef-like emu meat is lower in cholesterol and almost fat-free. But emus are much more than just an alternative food.

"We have emu meat frequently," Carolyn Verplancke said. "It's tasty and it's tender."

The emu hide, however, is tough as leather, and is used in to make boots, belts and purses.

"The feathers are used in feather-dusters, and emu oils are used in skin-care lotions and as a rub-on cream to treat bruises and arthritis pain," Whitaker said.

The current market, however, is for sales of breeding stock to other farmers, with breeding pairs selling from a low of $2,000 to a high of $10,000 or more.

However, there are places that emus can be sold for slaughter, including Emu Ranchers Inc. (ERI), a processing company with facilities at Ozark, Mo., and Richardson, Texas. 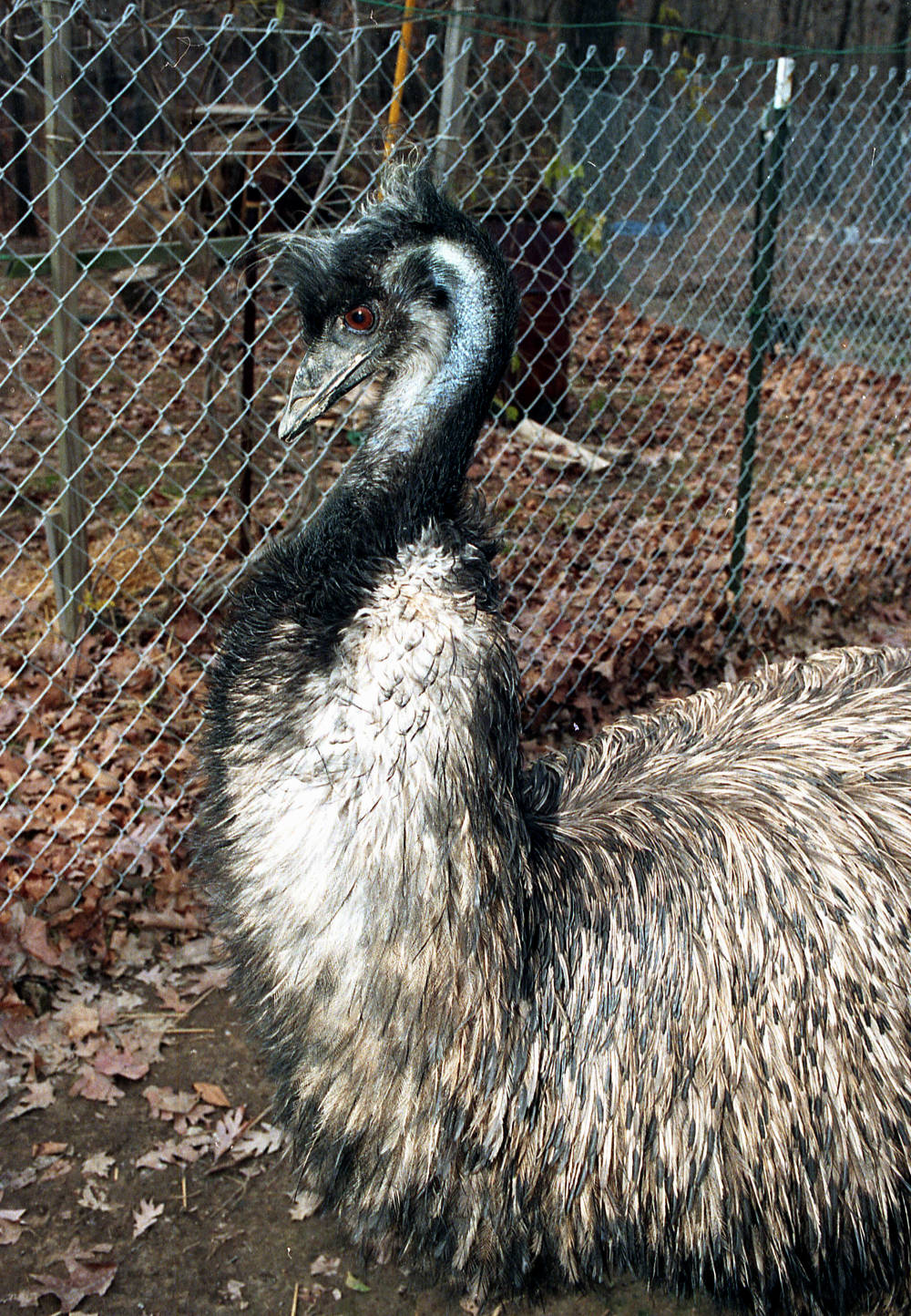 The processors sell the meat for $10 a pound, and the leather skin for up to $40 a square foot. Other major products from the emu include the feathers and emu oils.

However, the major emphasis for emu growers at present is the breeder market, which is expected to last another five to 10 years.

"So far, we have been involved in selling breeder stock," Verplancke said. "But, we'll be looking to sell to processors in the near future."

Whitaker, who has grown fond of his birds, says he receives numerous calls for breeding stock.

The emus are tough birds, he added. "They're able to live outside. Even the winters here don't seem to bother them."

Whitaker provides inside facilities for the birds.

"Some of the birds won't come inside," Whitaker said. "We encourage them, hoping the females will lay their eggs in straw we placed on the floors."

The emus lay their eggs in the winter, usually starting in October.

The birds lay from 20 to 30 eggs each season, but some have been known to lay as many as 50 to 60 eggs, while others never lay at all.

"Some of the big emu producers are very scientific in their breeding stock," Whitaker said. "They keep records on genetics, bad traits, good traits and egg production. Naturally, they like to have birds who lay 50 to 60 eggs during the season."

The male emu sits on the eggs until they hatch.

The emu, although smaller than the ostrich, is still a big bird.

The birds are brownish black, with very thick feathers.

Whitaker, like many emu farmers, sings the praises of the flightless birds.

The birds seem to be contented.

"Once they get used to an area, they don't wander too far off," said Whitaker, who utilizes fencing "mostly to keep predators out."

Emus in the wild like fruit and green plants. In some areas in their native Australia, they are considered pests because they eat crops and break down sheep fences.

"Food is the biggest cost of raising the birds," Whitaker said. "I'm looking into a way of making my own emu feed."