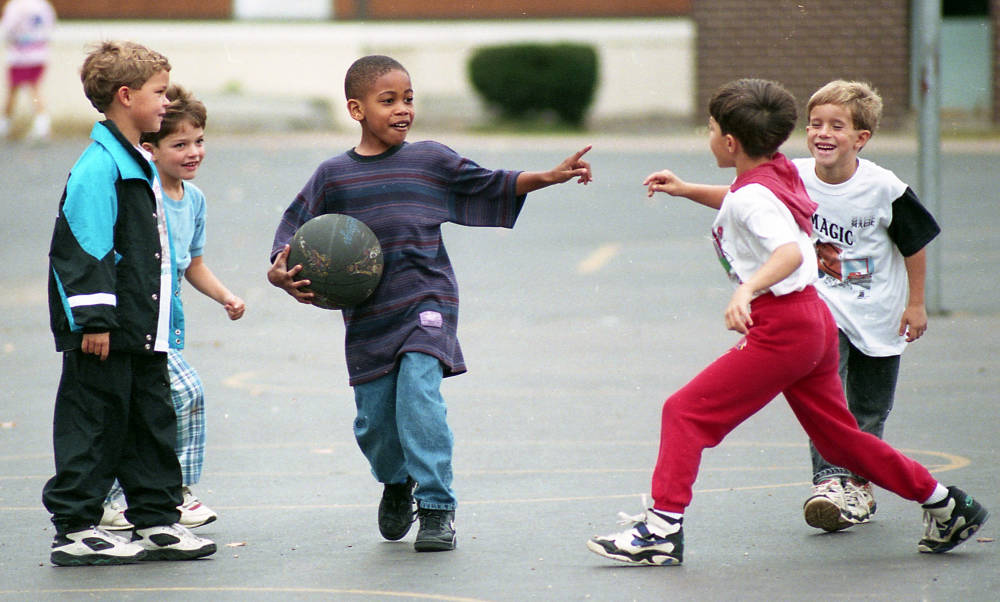 Animated conversation is lost in autumn gusts as young boys one by one mount a log in the Clippard School yard. Arms flung out for balance, they walk its length single file, jump from the wood and hurry to repeat the fun.

Several yards away, girls and boys stake out positions on a kind of circular monkey bars. A yellow-haired girl happily chats with a teacher, unmindful of high-pitched slivers of laughter and the repetitive thud of a basketball on the pavement.

It looks like fun and games, and it is. But it's much more. Playground activities translate to valuable learning experiences for children and teachers alike.

For the children, it can be a time for applying lessons taught in the classroom. For teachers, it's a prime way of learning more about their students.

Playground time is "a part of school, an important part," noted Linda Hill, kindergarten teacher at Clippard. Development of socialization skills, motor skills and language, it's all going on within the school yard, Hill said.

"These are skills they're learning that are lifelong," she said. 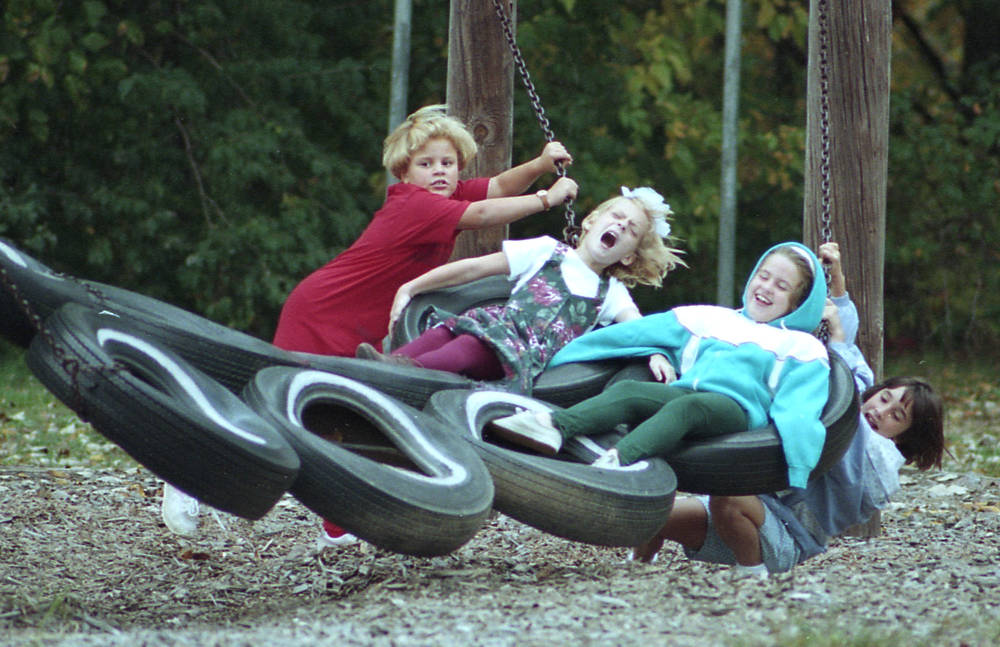 Tammy Simminger, a Chaffee Elementary third grade teacher, agrees. With the younger children in particular, she noted, "they just need that play time, just time to be a kid.

They learn socialization skills, how to follow rules, get along with each other, how to work out their differences," she said.

Several of Hill's kindergarten students observe that the most important thing to remember on the school yard is simple courtesy.

"You have to share," Tracy Burk asserted. "Because it wouldn't be nice if you didn't."

Todd Miller, nodding his head in agreement, noted that "you have to share your toys and be nice."

Thinking hard to remember other playground rules of etiquette, Kara McLaughlin interjected in a soft voice, "And don't fight."

"Don't run away," chimed in Thomas Karraker. Suddenly remembering another rule, he noted, "You can't go in the woods."

That struck a chord with classmate Bobby Koeppel, who remembered a good reason why. "It's poison ivy in there," he said.

All five students agree that they like to play with boys and girls on the playground.

Watching the interaction among students, teachers learn much.

"It gives the teacher insight on the student, who they play with, who they interact with," Simminger said. "A lot of times you don't pick up on that in the classroom because it's so structured."

Plus, Hill noted, "I hear comments outdoors that we don't necessarily hear in the classroom."

And sometimes, disagreements or other problems do occur. 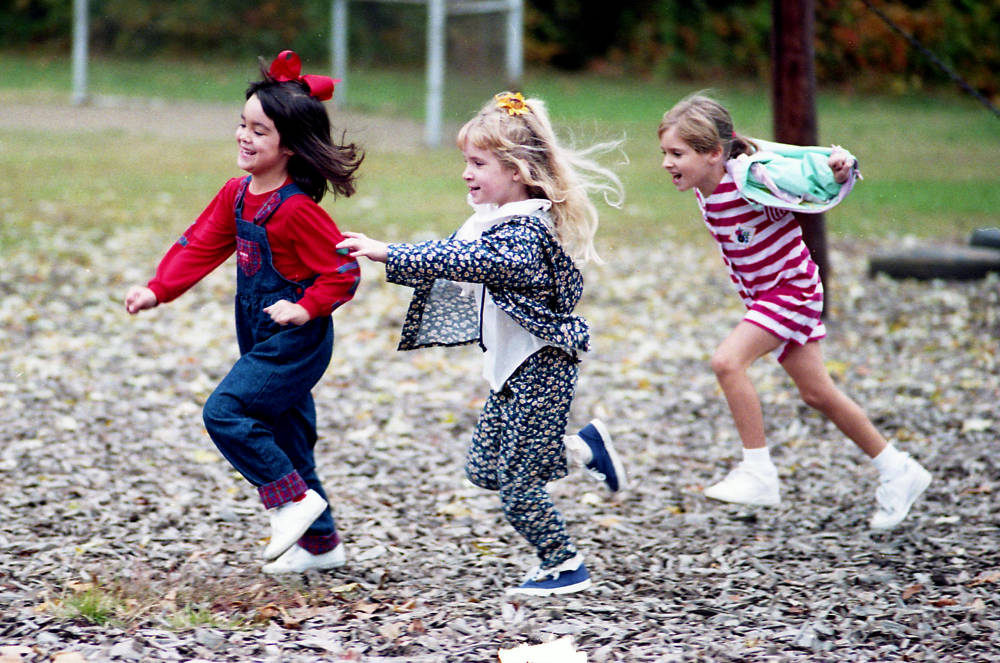 "As you watch the children mature, they're also forming groups to play with," Hill noted. A kindergarten teacher for some 28 years, Hill said that generally teachers try to stay back and let the students handle situations as they occur "as long as they're safe."

"Safety is number one out there," she stressed.

Yet, every adult remembers the pain of feeling left out. There are times when teachers will encourage others to play with children who may be feeling that way, both Hill and Simminger noted.

When fights do break out, teachers step in and help the children find other ways of settling the conflict.

Every school has its own set of playground rules. But it's also important to let the children have input, explained Caroline White, teacher's aide in Hill's kindergarten class.

"We let them tell us the rules they think they should follow," White said. "If they can make their own rules, then they are more apt to follow them."

The playground rules at St. Paul Lutheran School in Jackson are pretty much old hat for twins Julia Brown and Liza Brown, second graders at their hometown school.

"We've been in school long enough to know the rules," Julia Brown said. "But the first graders still have to be reminded."

"There's no climbing up the slide, and no going across the monkey bars on top," noted Liza Brown. "And we're not supposed to twist up the swings at school or at home," her twin sister interjected.

Fourth graders at West Lane Elementary in Jackson have adopted kick ball as the game of choice, according to Emily Rigdon who just turned 10. "Pole tag is another fun thing to do," she said.

Oblivious to the skills he's acquiring during the playtime breaks, young Bobby Koeppel just concentrates on having fun. "Usually me and the guys, we play by ourselves, he said." "We play Power Rangers, some real fun stuff ." 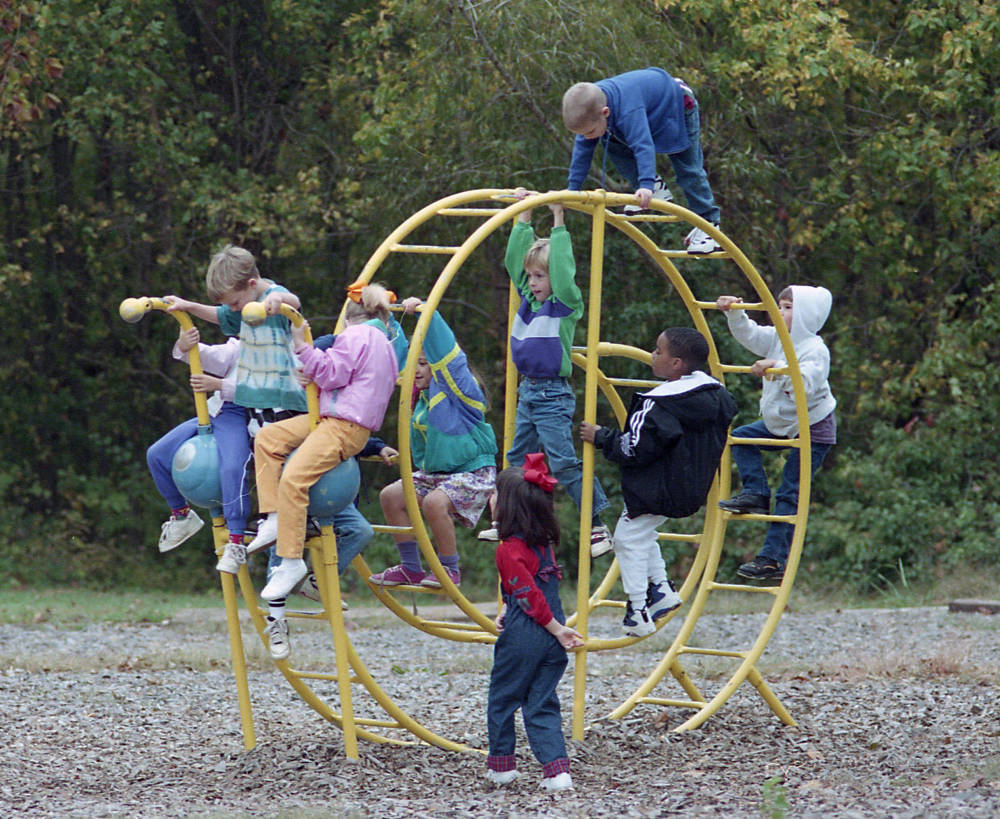 Children play on a jungle gym at Charles C. Clippard Elementary School in this unpublished photograph taken in the fall of 1994. (Fred Lynch ~ Southeast Missourian)