In 1968 the Greater Cape Girardeau Historical Association acquired the historic David A. Glenn residence at 325 S. Spanish St., from Robert W. Erlbacher. Plans were made to restore the property to its former glory and open it as a house museum for the city. But to do that, funds were necessary.

Now, I don't know who came up with a fancy-dress ball as a fund-raiser, but he or she should be congratulated. Beginning in 1969 and continuing into the early 1980s, the Heritage Ball became the high point of the social season in Cape Girardeau.

Prior to that first ball, interest was generated in the event by publishing a photo layout in the Southeast Missourian newspaper, featuring some of the prominent, history-minded ladies of the community dressed to the nines. I've dug up those photos, along with a couple articles that described the 1969 Heritage Ball. 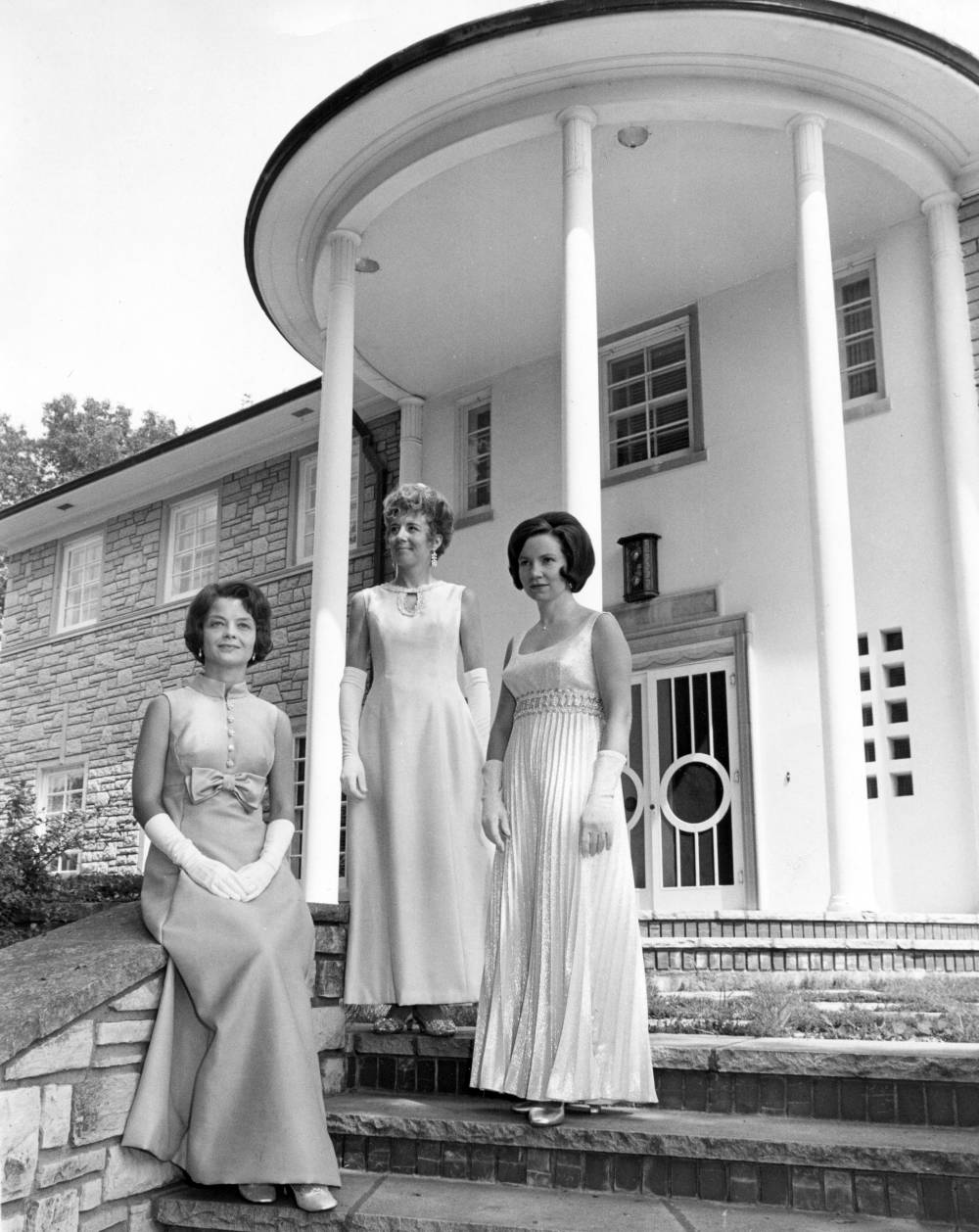 State columns, reminiscent of an era of southern grace, provide an elegant backdrop for, from the left, Mrs. Jerry L. Kinder, 753 Perry, Mrs. Charles F. Blattner, 1440 Luce, and Mrs. A. Robert Pierce, 2544 Ranchito, as they look ahead to next Saturday's Heritage Ball.

Cape Girardeau's social season will hit new heights next Saturday night when the first Heritage Ball -- the expectation is it will become an annual affair -- is held at the Arena Building. Preceded by a dinner featuring French cuisine, the dance is expected to attract several hundred couples. Funds derived from the formal affair will be used to restore the Glen House, nearly a century old, in the first step toward marking Spanish Street for its historic past. The Cape Girardeau link of El Camino Real, the old Spanish highway, it has many fine homes, Common Pleas Courthouse and other sites of historic significance. On this page Cape Girardeau participants who the gowns they will wear to this exciting event.

(The name of the photographer was not noted. The photographs were taken in and around the Erlbacher "boat house" on West End Boulevard. - Sharon) 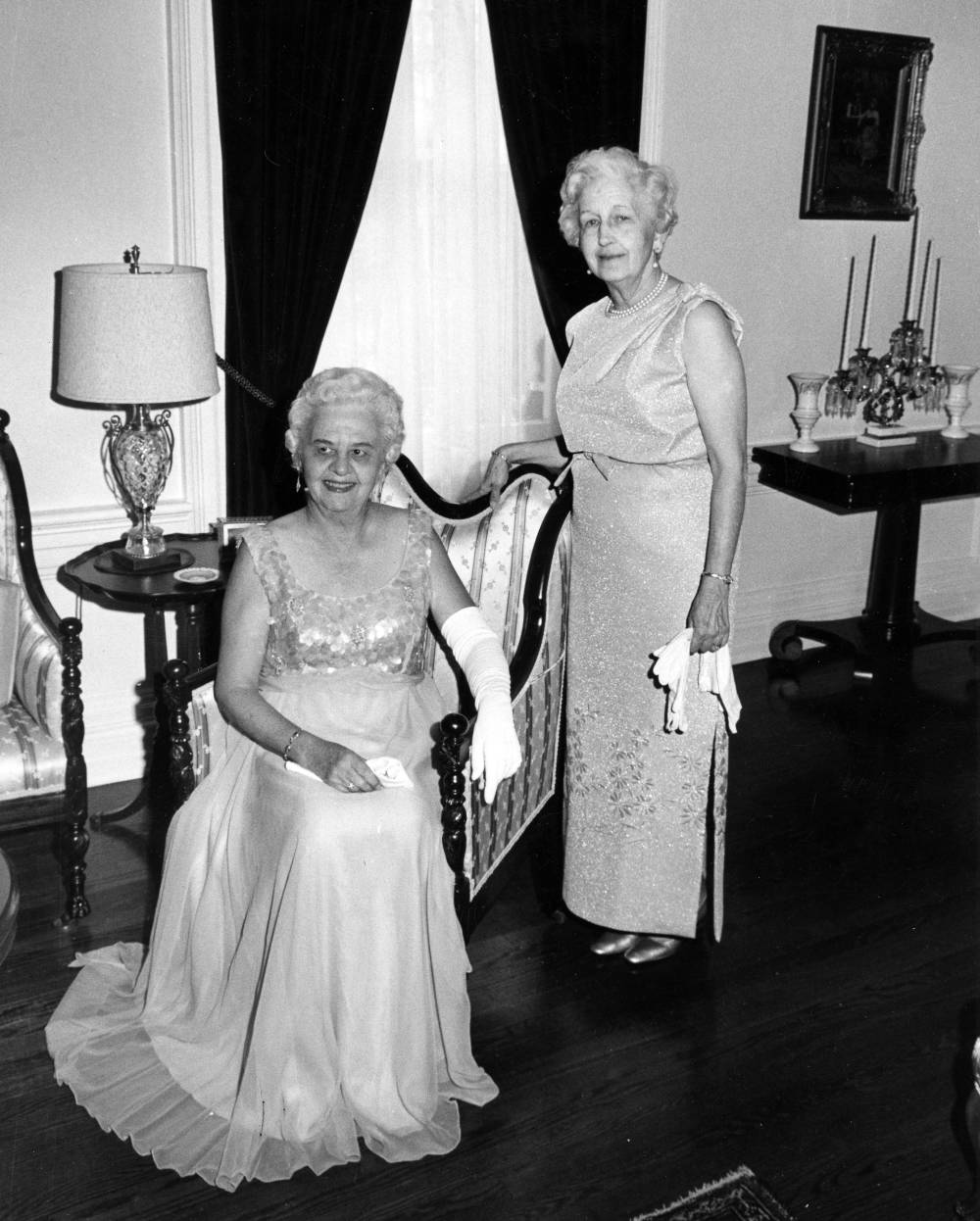 The graceful symmetry of an antique chair provides the proper contrast for the sleek lines of gowns worn by, from the left, Antoinette C. Meyer, 374 N. Pacific St., and Mrs. Wendell W. Black, Oakenwold. 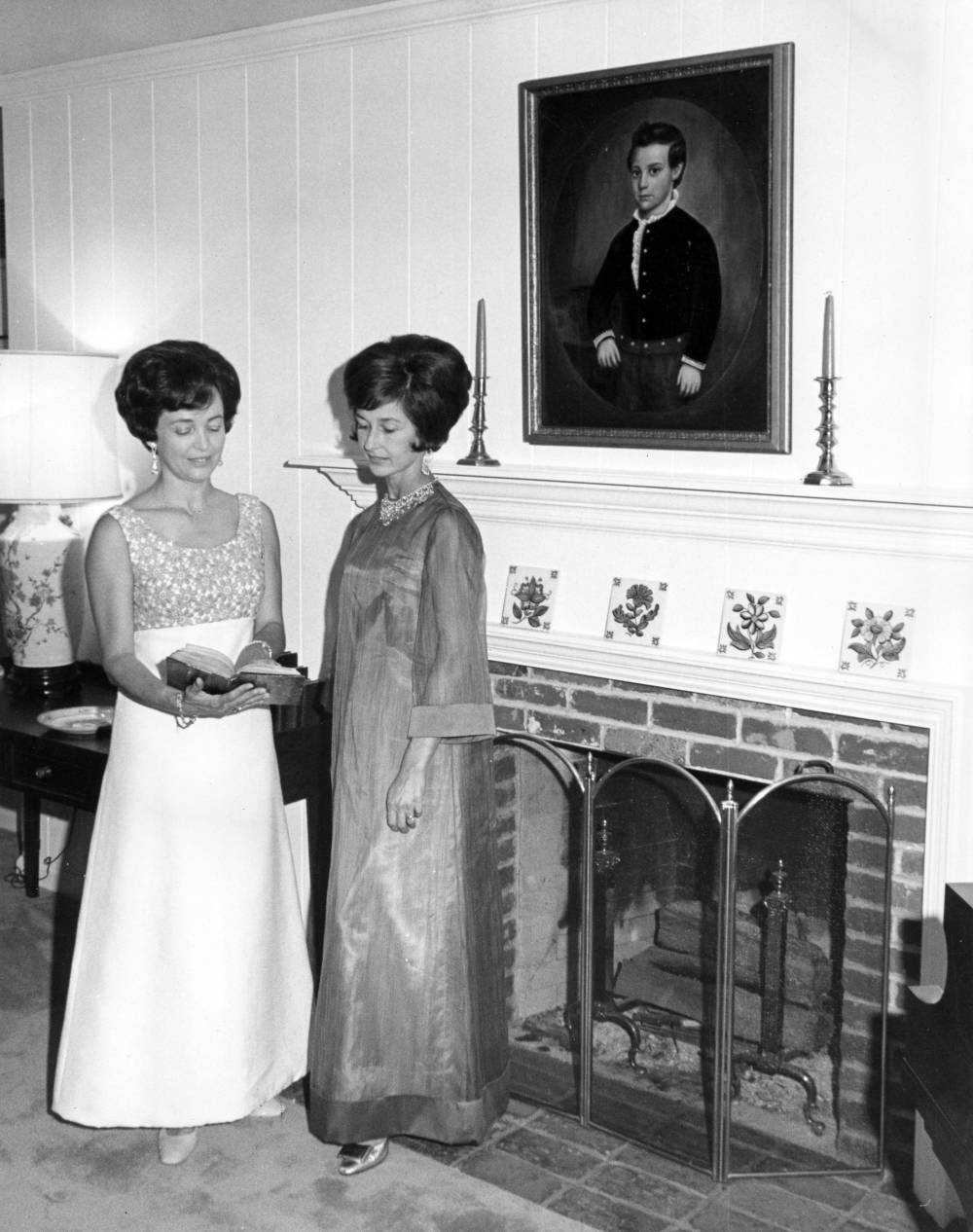 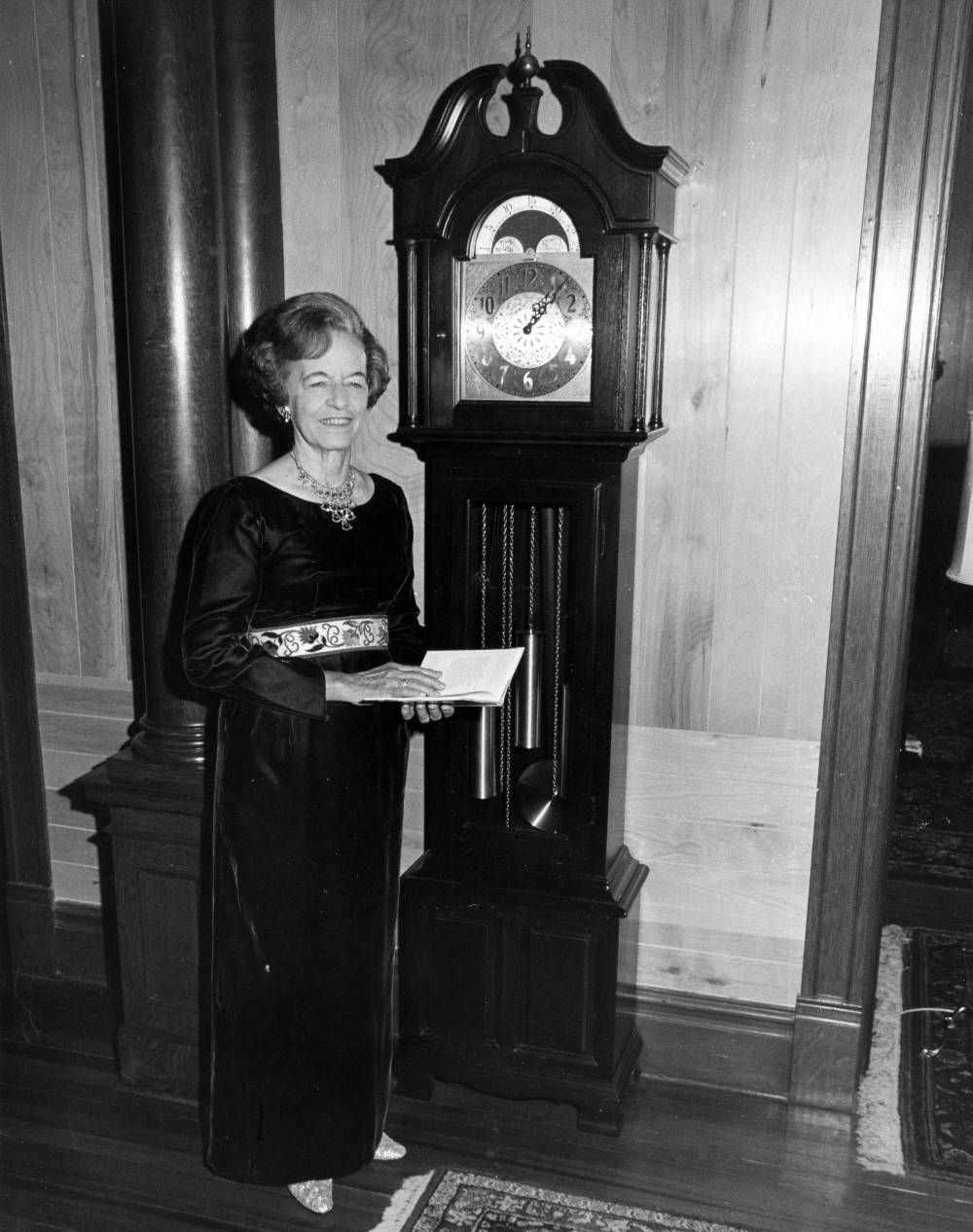 Mrs. M.E. Leming Jr. 740 North St., stands beside a grandfather clock similar to one that could have ticked away hours in the spacious, high-ceilinged hall of the Glenn House. 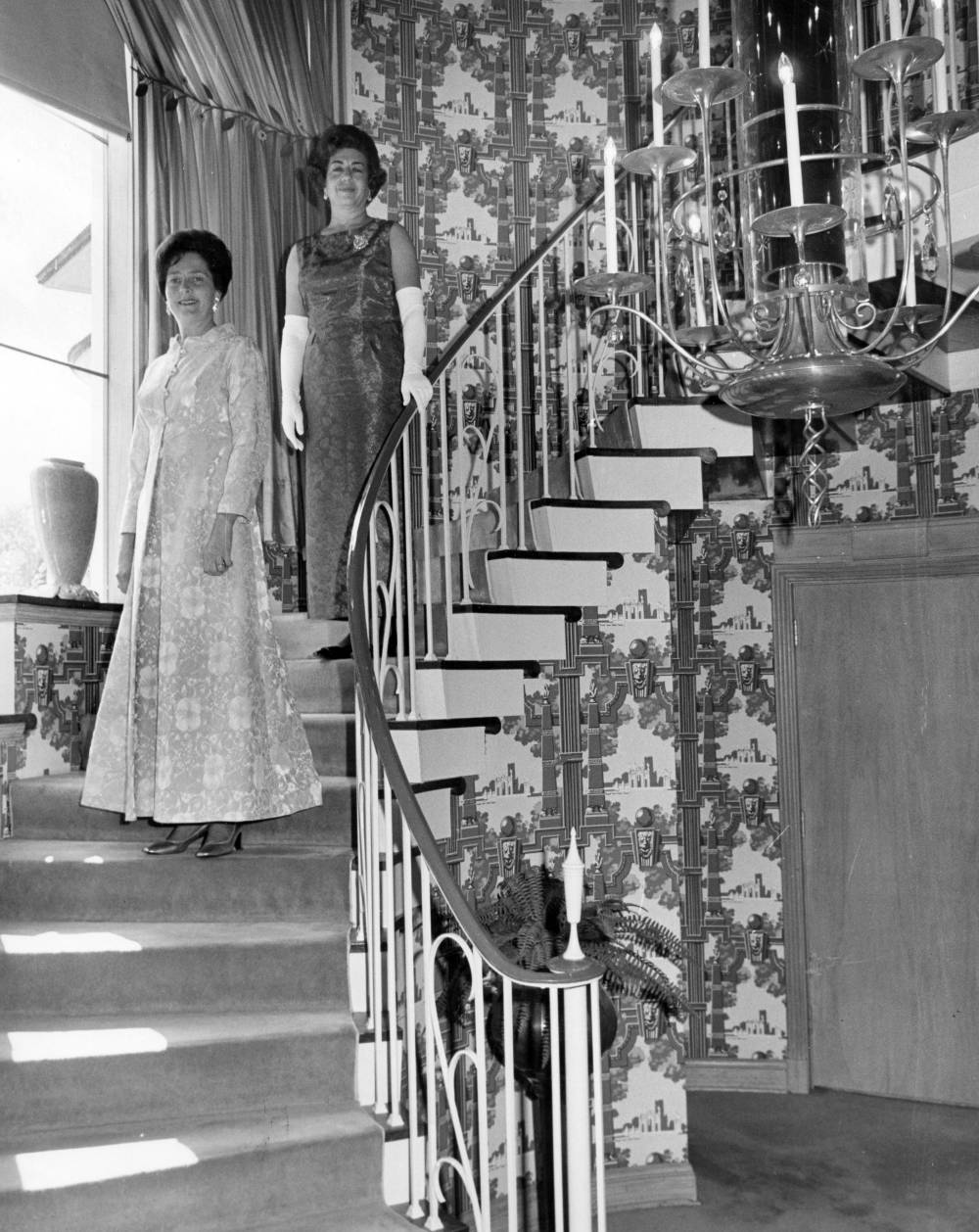 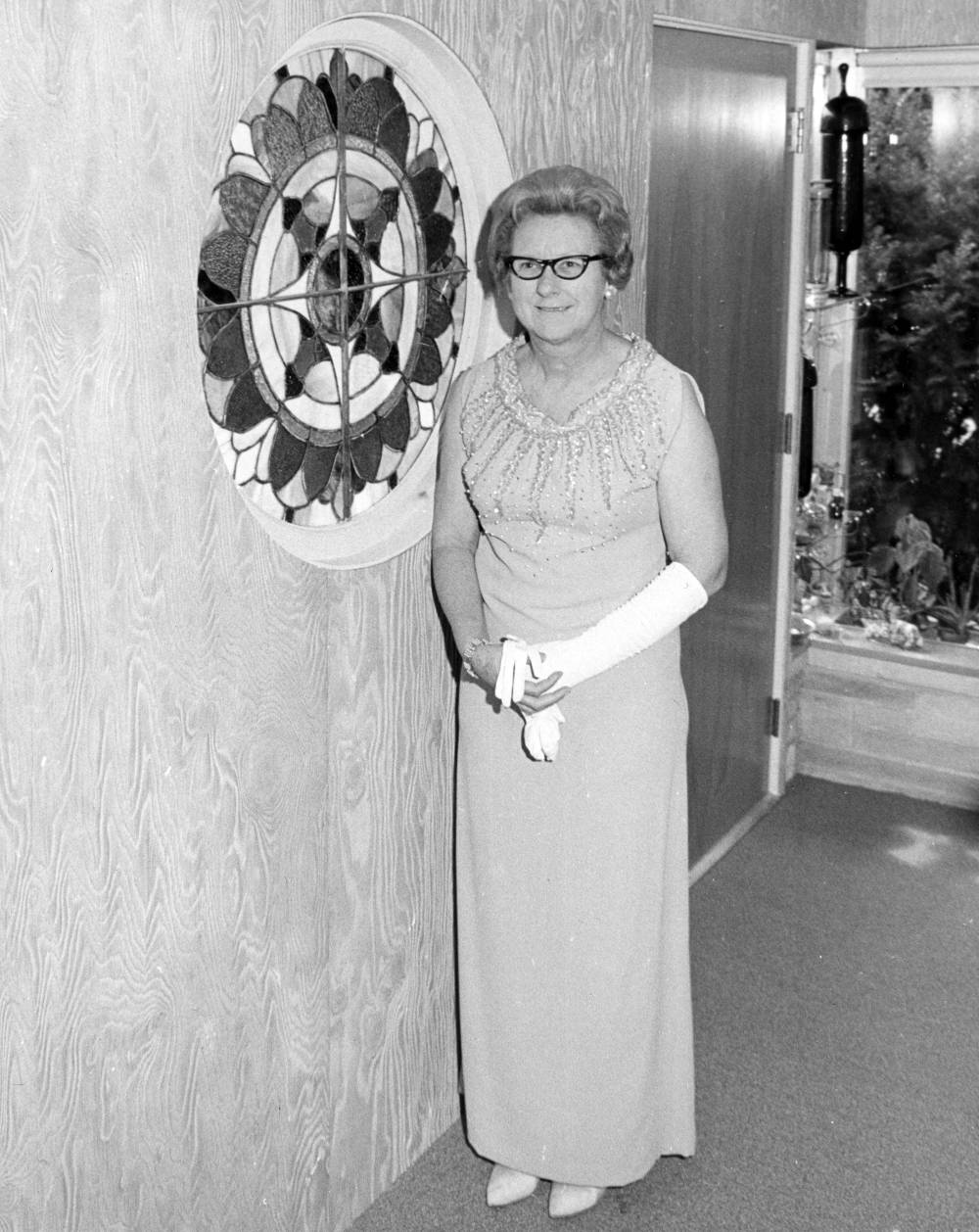 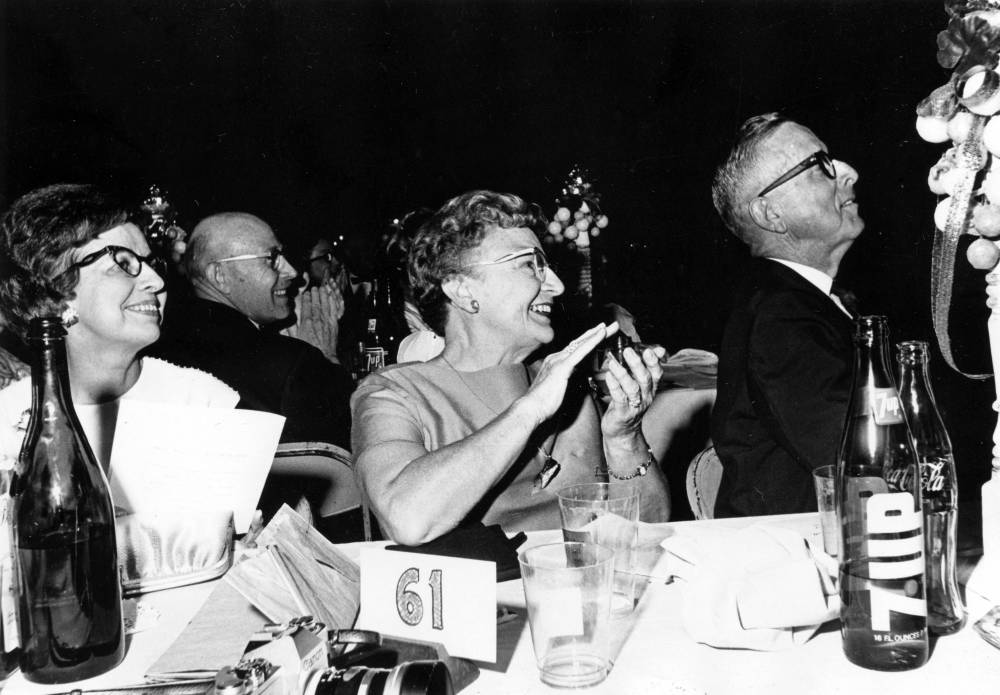 The setting was elegant.

One could scarcely realize that this was the concrete expanse of the Arena Building.

A corridor of canvas, stretching from the roadway to the entrance, led the participants into the living room of the old Glenn House.

Could this be the foyer of the Arena, that area flanked by offices and fronted by a ticket booth?

Instead, there was a fireplace, mantle and all, carpeting and graceful furniture, papered walls and an atmosphere of charm to greet those who came to Cape Girardeau's first Heritage Ball.

It was an inspiring beginning for the event planned and executed by the Historical Society of Greater Cape Girardeau to raise funds to restore the Glenn House on Spanish Street.

As the participants entered the Arena, it hardly seemed possible that it could be converted into such a fairyland.

Lighting was from the soft glow of candles, resting tall in holders made from old stairway spindles rescued from many razed Cape Girardeau dwellings. Candle holders used at the ball may be purchased by contacting Mrs. Paul R. Lueders.

Tables of 10 were set around the dance floor and here the ladies in their evening gowns and the men in their tuxedos and dress suits found their places. 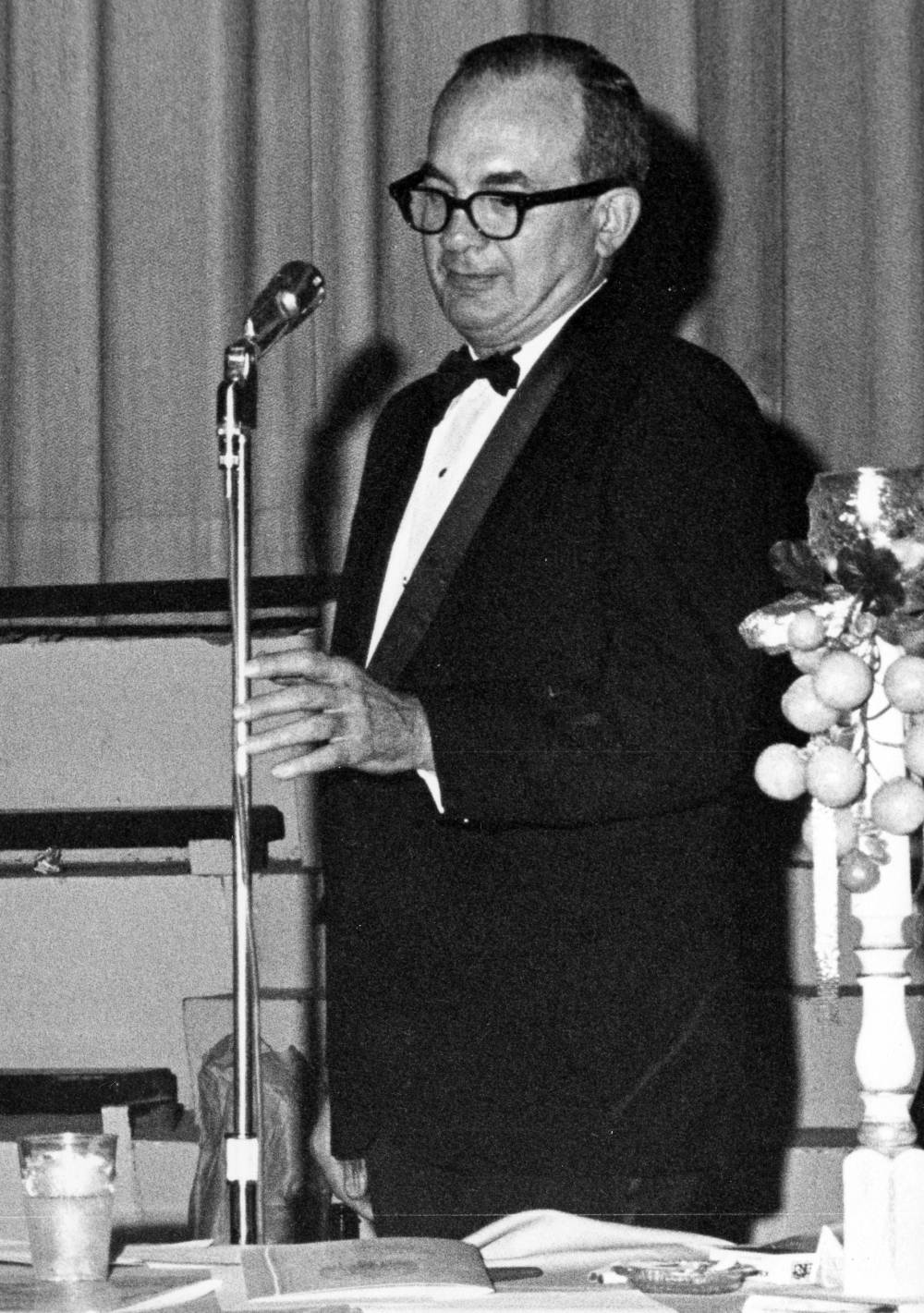 It made no difference, as Master of Ceremonies Jack E. Himmelberger noted, that the "French menu" that had been announced was actually a menu in French and food itself was pure American, sans crepe suzettes, snails, etc.

"If you didn't bring your poisson," said Mrs. Himmelberger, "there ain't going to be any poisson." And that's the way it was as the guests dined on beef and topped off the meal with petits fours, the only legitimate French food on the menu.

Following dinner, the curtain rose on a tableau of the old D.A. Glenn "general merchandise" store and a turn of the century street scene in old Cape Girardeau.

Colorful backdrops characterizing the hustle and bustle of the store and an antique buggy and park bench was the setting for a trip to town by mother, father and daughter, Sarah.

Gowns showing the elegance of the early 1900s were modeled as Sarah, played by Charlotte Blattner, chose items for her trousseau.

A highlight of the scene was an old-fashioned wicker baby carriage, complete with large spoke wheels and ornate umbrella top.

Three young girls, dressed in ruffled pantaloons, trying on a corset with much tugging and tightening of strings added a light touch to the pantomime.

Approximately 25 gowns, donated for the event by area residents, were modeled. Mrs. Walter J. Wehking wrote the script which was narrated by Mrs. Jerry E. Erlbacher.

Dancing in the soft glow of candlelight to the music of Jerry Ford's Orchestra (featuring vocalist Pat Blackwell) concluded the evening.