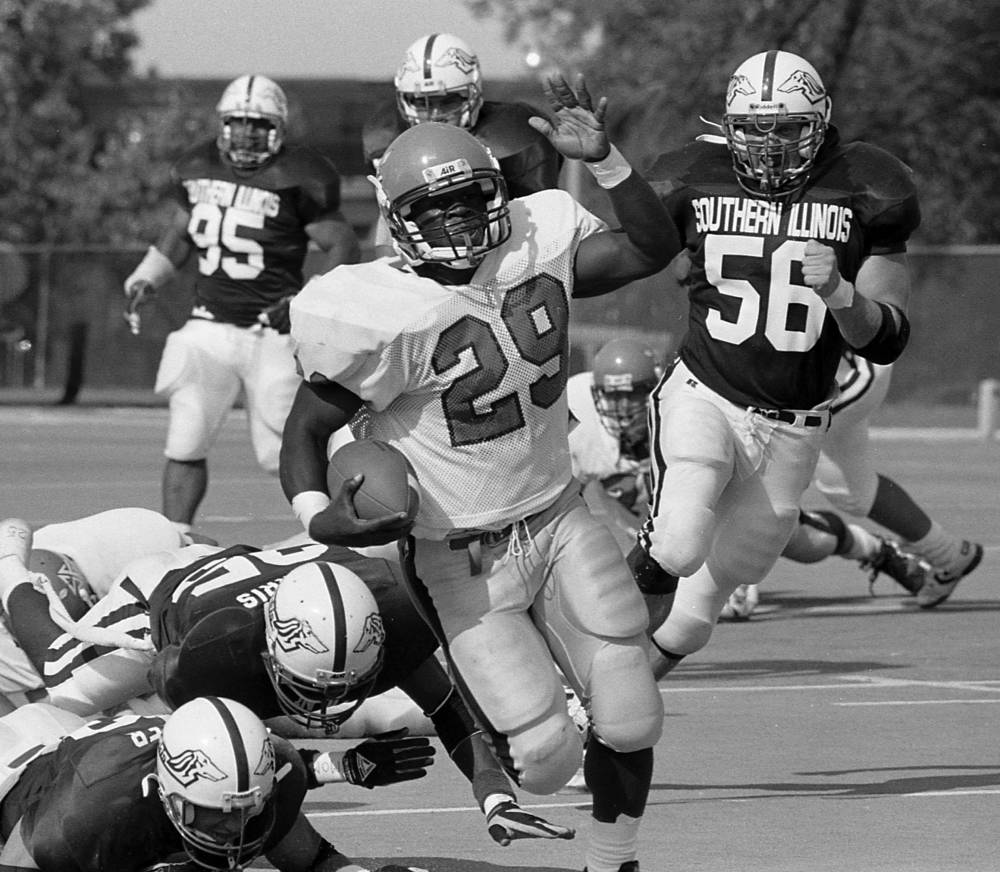 Anderson gained 132 yards on 24 carries as the Indians posted their fourth straight victory, a 24-14 victory over host Southern Illinois University.

The 5-foot-9, 195-pound senior tailback from New Madrid County Central High School now has 3,028 yards in his brilliant Southeast career. He broke the rushing record held by Walter Smallwood, who played for the Indians from 1965-68. Smallwood, who lives in St. Louis and was at Saturday's game, had 3,006 yards rushing.

"I'm happy for Kelvin," said Smallwood. "He's a tremendous running back and he deserves the record."

Anderson didn't surpass Smallwood until just 2:36 remained int he fourth quarter Saturday. He broke loose for a 16-yard run, which gave him 125 yards on the day and the record. Anderson added a seven-yard run on the next play and then went to the bench for good.

"I'm glad to get it out of the way," said a smiling Anderson later. "I've waited three years for this.

While Smallwood played four seasons at Southeast, Anderson is in just his third season of action and he still has five games to go in his career.

Anderson, who rushed for more than 2,000 yards in his senior season at New Madrid County Central High School, sat out two years at Southeast because of eligibility problems.

But when he finally did get on the field, he made a major impact right away, gaining 222 yards in his first collegiate game against Murray State in 1992. Since that time, Anderson has had 14 games of more than 100 yards rushing. He gained 1,371 yards in 1992 and 1,016 yards last season to become the only player in Southeast history to rush for more than 1,000 yards in a season.

So far this season, after Saturday's victory, Anderson has gained 643 yards. He stands a good chance at breaking the 1,000 yard rushing mark again.

"Kelvin has had a phenomenal career at Southeast," said Indians' coach John Mumford. "I think it's great that a player from the area has done what he's done."

From the first day he set foot on the Southeast campus, Anderson said he's had his sights on the school's career rushing record.

"That was my very first goal here, to get the record," he said.

Although if Anderson had his way the record-breaking performance would have come at home, he wasn't complaining.

"I felt good coming in and I thought I'd get it today," he said. "I would rather have got it at home, but SIU is a big rival so that's nice."

Anderson was quick to compliment his offensive line and the entire team. At 5-2, the Indians are having by far their best season since the moved to Division I-AA in 1991.

"It's sweet," said Anderson of the Indians' success so far. "There are no negative players on the team this year and that's made the difference."

He went on to play professional football with the Canadian Football League. According to Wikipedia, the running back rushed for over 1,000 yards in eight consecutive seasons in the CFL and won the league's Grey Cup championship in 1998 and 2001 as a member of the Calgary Stampeders. Two years ago, he was inducted into the Canadian Football Hall of Fame.